In my New York City high school in the late Seventies, the black kids listened to funk and disco, the white kids to Sixties rock and new wave — music that reflected back who we imagined ourselves to be. Then there were the musical theater kids, another race entirely, devoted to songs built on a different science, to develop characters and advance stage narrative. They were adorable, but song for song, generally insufferable.

This triangulation figures in The Fortress of Solitude, the endearing adaptation of Jonathan Lethem’s music-geeky novel about 1970s Brooklyn that’s currently running at New York’s Public Theater. It also figures in a notable aesthetic shift where musical theater is finally — thank God — engaging more deeply with modern pop, both mainstream and indie.

The trend is obviously demographic-driven – boomers and Gen X-ers are aging into theater-goers/-makers, combined with the collapse of the record business. Following in the footsteps of rock-minded forebears like Hair, Jesus Christ Superstar and Rent, this more-or-less began in 2006 with alt-lite singer/songwriter Duncan Sheik dialing back the usual Broadway cheese on the hit Spring Awakening, and it’s given way to some remarkably cool musicals. Literary indie-rocker Stew (of The Negro Problem) took his Passing Strange to Broadway in 2008, an autobiographical song cycle that had him onstage both narrating and killing it with his band; it was so good, Spike Lee filmed it. A year later, with Brooklyn afrobeat acolytes Antibalas in tow, the brilliant Fela! also hit Broadway, thanks to boosting from Questlove and investment from Jay-Z. The unlikely pop-punk American history lesson Bloody Bloody Andrew Jackson was inspired, even if its Broadway run tanked; American Idiot was better than it had any right to be, and has toured for years; the U2-enhanced Spiderman: Turn Off The Dark, if nothing else, was a fascinating pop train wreck (see Glen Berger’s wild-ride insider tale Song of Spiderman). New-wave hitmaker Cyndi Lauper wrote music and lyrics for Kinky Boots, which is still kicking, as is the authentically glam-rocking Hedwig and the Angry Inch revival. Worthy jukebox musicals like A Night With Janis Joplin, Motown, the modest and surprisingly compelling off-Broadway Lennon, and Tammy Faye Starlite’s spot-on, way-off Broadway Nico: Underground skew towards boomers but keep coming.

Weaned on the heydays of college radio and early internet free-for-all, the sizable target audience for these shows are clearly willing to pony up for good music. No wonder even non-musicals want a piece: The note-perfect all-star revival of Kenneth Lonergan’s early-Eighties sorta-coming-of-age slacker drama This Is Our Youth – a next-gen Broadway salvo if ever there was one, complete with Pitchfork ad campaign — gives Vampire Weekend‘s Rostam Batmanglij star-font billing, even though his original music, which enlivened bar traffic during intermission, is otherwise underemployed.

All this made the prospect of a Fortress musical promising, as did its opening (after a premiere run in Dallas) at the Public, the forward-looking arts operation launched in 1967 with the world premiere of Hair that went on to incubate Passing Strange. (In addition to Fortress, it’s also presenting the most visionary of recent new-school musicals, David Byrne’s disco-riffic Here Lies Love.)

On stage as in the novel, the Fortress story centers on the friendship between white, Jewish Dylan Ebdus (played by Adam Chanler-Berat with impressive nerd acumen) and black Mingus Rude (the charismatic, more closet-geeky Kyle Beltran), kids growing up in 1970’s Gowanus né Boerum Hill. Dylan’s single dad is a visual artist, Abraham (Ken Barnett); Mingus’ is a past-his-prime soul singer, Barrett Rude Jr. (a movingly faded Kevin Mambo). Dylan grows up to be a music journalist, while Mingus goes a different route. Their friendship waxes and wanes, complicated by race, drugs, and fate. Music fixations aside, they are also comic geeks, and in one of the work’s central metaphors, the pair accesses a non-pharmaceutical superpower. Daniel Aukin’s evocative and modest direction lets them employ this gift, suffice to say, without a need to fly over the audience Spiderman-style. 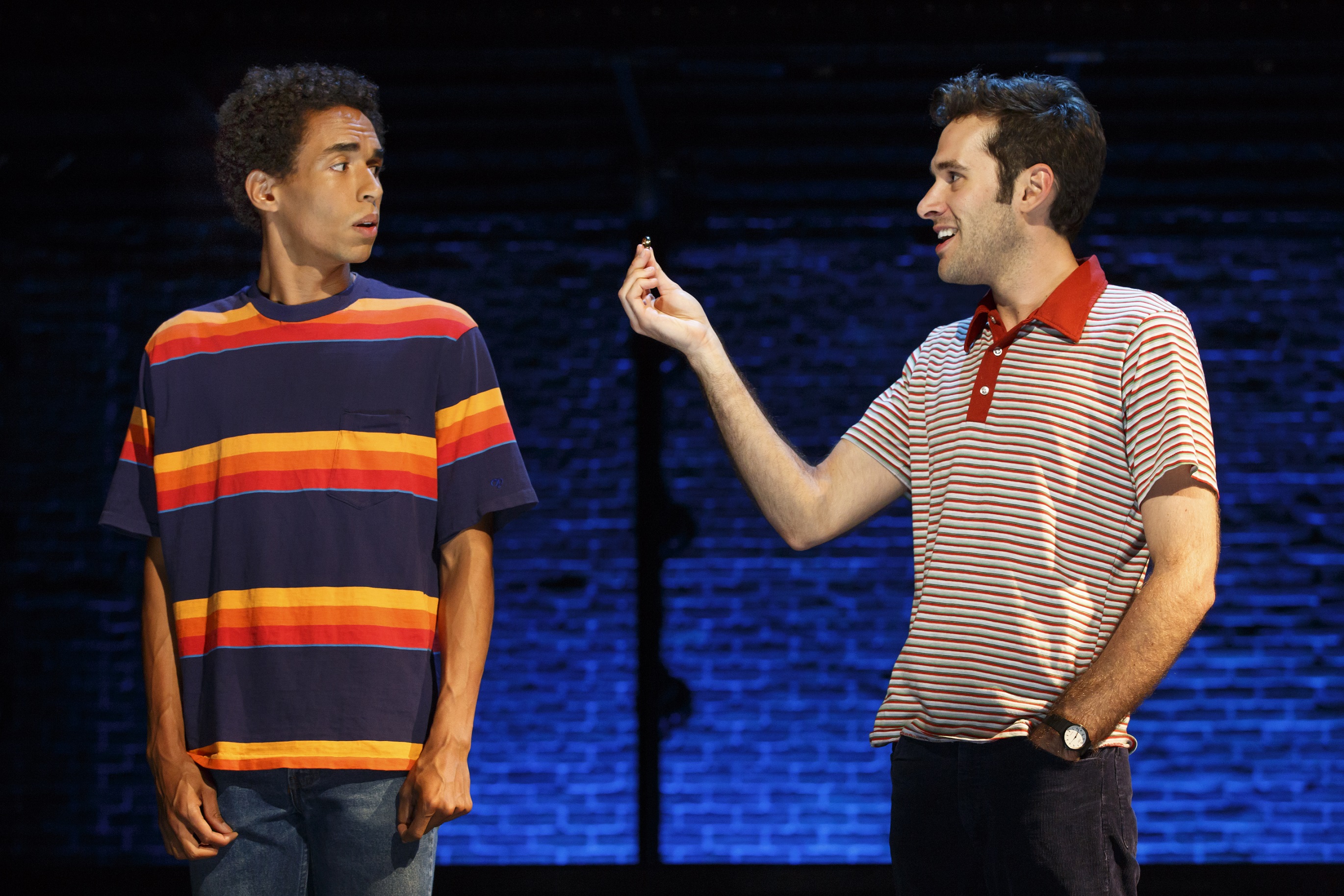 But are the songs fly? Sort of. Composer Michael Friedman (Bloody Bloody Andrew Jackson) centers the shows sound on the proto-disco Philly soul sound of Barrett Rude Jr. and his fictional group, the Subtle Distinctions. This sets the bar high for vocal performance, which the singers can’t quite reach. The material is virtually all written by Friedman, another hurdle, though he has an ear for pop and a knowing attention to detail. Allusions to Al Green’s “Take Me To The River”, and the Talking Heads cover of it by extension, weave through the show, connecting Mingus’ soul roots to the CBGBs-era punk scene Dylan eventually falls in with. Bits of the Heads’ “Once In A Lifetime” also bubble up, along with spoken lyric shards and other inside references (i.e., the “don’t look back” reprise directed at Dylan, a rap that quotes both the Beastie Boys and Wild Style, etc.). In the most explicit pop song quote, Dylan is chided to the lyrics of Wild Cherry’s white-boy-indicting “Play That Funky Music”. Later in the show’s timeline, the menacing Robert Woolfolk (humanized touchingly by Brian Tyree Henry) begins spitting Biggie-style rhymes over serviceable beats and a Dr. Dre-style mosquito synth signifying gangsta rap, albeit West Coast. The house band is solid, and the pop gestures are artful. But they make you long for the sources.

That the music falls short of the novel’s pop-obsessed ideals recalls another moment in rap history: when copyright lawyers effectively shut down the freewheeling art of hip-hop sampling to all but the highest rollers. Would more of the original Seventies music, even in fragments, have magnified the Fortress experience? No doubt. Would securing rights have ballooned the cost of this modest production? Probably. As more musicians start envisioning musical theater as an opportunity to fill the gaps, creative and fiscal, left by the deflation of the recording industry, it would be great all around if theater composers had a more DJ-like freedom to use pop music. While the lawyers and producers sort that out, I’ll keep my fantasy Fortress musical in my head, the one that ends, like the novel, with Dylan driving through the night listening to Brian Eno’s Another Green World. Until then, this production will do.