Hot on the heels of their Converse sneaker mini-collection hitting retail, Gorillaz, James Murphy and Andre 3000 are set to release the video for “DoYaThing” tomorrow, and we have some exclusive preview shots of what to expect. In short, it looks like another mind-distorting dose of artist Jamie Hewlett’s gallows humor. Check out these images as Gorillaz’ central members, 2D and Murdoc, share their thoughts on the criminal origins of “DoYaThing,” getting along in spite of it all, and their stake in anti-fashion.

“DoYaThing” – so good, it’s criminal: “I would have to say this is the first collaboration we’ve done in which the other artists had no idea they were involved. That’s a real first for us! But every hook-up we’ve done in the past has been, well, ‘unique.’ Some have come easy, others at times we’ve had to twist the collaborators’ arms to get them on the track. One or two of the guest artists we’ve actually had to kidnap, and drag them over to the studio to get them to do their stuff. True. But this is the first time I’ve actually stolen a track from another artist and then put my own, Gorillaz’ own, stamp on it, and then tried to pass it off as my own work. But it’s come out great! Really good! I think in a funny way it’s one of the very best things we’ve every done.” – Murdoc 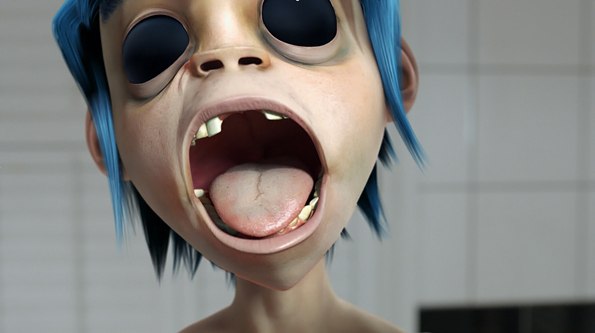 Borrowed beats: “I couldn’t get hold of [Andre 3000] for some reason. My calls kept going to answer phone. We looked at some other people that we could work with, but eventually I thought, ‘Nope. Andre 3000 is the guy I want,’ the guy we all wanted, so I decided to pay a visit to his studio and just, well . . . help myself to his material, maybe just take something he’s already recorded and use it for myself. Now [Andre’s] apparition has been haunting our house, popping out of cupboards, hiding in wardrobes . . . it’s quite disturbing, really. And he’s taken to wearing a mask, too. But it’s definitely him.” – 2D

Pop karma: “I’m not quite sure [Gorillaz] are seeing eye to eye quite yet. But it’s getting better. The other members are coming round to the idea that this really is a good thing, this track. A good thing for all of us. I think once all of the paperwork and the accusations of theft are out of the way, they’ll forgive me my methods and see that the way I work, whilst morally dubious, it’s always for the greater good. Music is my North Star, see? That’s where I steer my ship. Anything else can fall by the wayside.” – 2D

On achieving a Gorillaz-worthy ghastly glow: “An avoidance of sunlight, a tincture of misanthropy, a dash of rum, a handful of roofies, y’know? 60 Lucky Lungs a day. It’s a delicate and heady blend of all things known to man that keeps my skin so silky smooth and soft.” – Murdoc 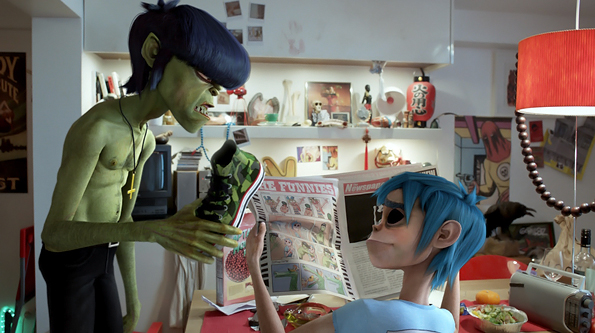 You are what you wear: “That’s what it’s always been, really. Four pairs of shoes. Me, Russel, Noodle and er . . . the other one. 2D. Always forget his name. But the whole history of this band has been just four pairs of shoes. Only this time, they’re available to buy. Through Converse. Nice plug, eh?” – Murdoc

On the band’s next stylish endeavor: “I think I’d like to release my own scent.” – 2D