A year ago, Surface to Air director Jeremie Rozan was at a Sonic Youth show and couldn’t believe his eyes: his idol, Kim Gordon, was wearing his shoes. Dressing your lifelong heroine surely provides the ulitimate validation for any designer – a feat somehow even more serendipitous when she comes to you – but Rozan handled the “strange and absurd” milestone with diplomatic aplomb. “We contacted her and offered her some more shoes. We just said we’d love to find a way to do something with her if she liked what we do in general. And she did.” Soon, the collaborative-heavy French design group had found not only its new official muse, but a creative partner armed with ideas of her own.

“She is all about being practical, comfortable all day long and mixing it with a dose of sci-fi, as if there was another planet she knows about. Maybe this place where she wants to take you,” remarks Surface to Air designer Dorothée Loermann, who collaborated with Gordon on the recently-launched collection, which encompasses 12 basic wardrobe staples with twists – like X-ray prints developed from the singer’s own artwork. Her impact, indirect or otherwise, on Surface to Air’s own lived-in, louche appeal has been apparent: their speciality is subtle, unexpectedly cut, sometimes androgynous styles for both genders, with the womenswear always seeming geared towards someone with a lot more on her agenda than spending hours culling together ambitious looks. Their work is suitably popular with musicians, and regularly invites their input; Kings of Leon and Kid Cudi have both “guest designed” for the house on a smaller scale. “In the sense of a modern rock star, clothes have to be practical, lightweight, not take too much space, strong, individual and special in the same time,” Loermann says. “Isn’t this something we are all longing for in our wardrobe today?”

Over the course of her career, Gordon had already founded a confident style provenance: as both an ambassador of progressive New York design (see: Marc Jacobs) and founder of her own short-lived streetwear lines (X-Girl and Mirror/Dash), she represents smart, artisinal fashion to many. “She has a natural elegance that very few people have,” Rozan raves. “If everyone has a common respect and admiration for something at Surface to Air, it is Sonic Youth and Kim.” He fondly recalls that he discovered Sonic Youth on late-night French radio in the 1990s, and found “Kool Thing” – “punk rock and hip-hop sleeping together!” – the ultimate synthesis of the things he loved.

Now, when the best parts of that decade are floating to the surface of our collective memory again, culture reminisces over those moments of friction in search of our own. The spirit of anti-fashion, the sense of being proudly isolated from the influence of a domineering trend or commerce, rears its head once more. Rozan agrees: “It’s a context we feel good in.”

Rolling Stone spoke to Gordon about her return to design, the power of presentation and the prevailing gender dynamics in pop.

How do the looks created for Surface to Air diverge from or harmonize with what you did for Mirror/Dash a few years ago? From X-Girl in the Nineties?
They are always different. X-Girl was more minimal and street, and it was a line I did with my friend Daisy von Furth through X-Large. At the time, there wasn’t much going on downtown except Daryl K and APC. We didn’t have much of a budget. The money and price point determines a lot. With Surface to Air, there’s more opportunity for fabric choices, which immediately makes it more interesting. They have their own DNA, so it’s a matter of finding a common ground. But they are a small company which is great as it allows more freedom.

Do you have a favorite look from the collection?
I like the jacket and the orange dress a lot. And the boots.

The styles are described as being influenced by your personal artwork. Can you give an example?
The print comes from a drawing I did and then took a picture of it in Photobooth, then used one of those cheesy effects like the X-ray. The writing on the t-shirt came from a grouping of words I painted on 8 inch by 10 inch sheets of rice paper that came from a list, then I arranged them and took a picture.

You continue to be a presence on New York’s smart fashion circuit. What do you think of the culture/ritual of Fashion Week? Do you enjoy it or find it alienating?
There are always a couple shows I like to see. I like the spectacle of it, but I don’t really care about the parties so much.

What qualities do you look for in clothing that you wear for stage? For home?
For stage, I like wearing a dress if I’m playing with all boys – like a contrast to the music which can be quite intense. But it can’t be a dress that looks like a party dress; it has to have a certain ambiguity.  A few times, I wore a Rodarte dress onstage and it made me feel very powerful, even though their fabrics are quite delicate. 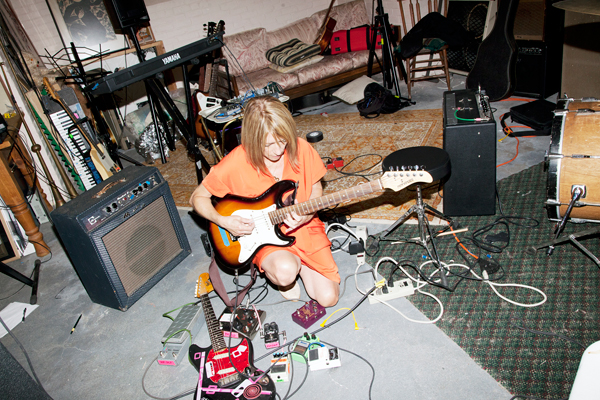 Yes, I suppose people look at them more and rock per se is a male-dominated arena; women on stage are already signifiers. But we are all la jeune fille when it comes to being marketed to.

Has there been a notable shift in how female musicians in the Nineties used their image/art directed visuals versus the way they do now?
In the fringe or experimental world, just the fact that there are more girls and women participating is something in itself that is new. I don’t really see any difference in the mainstream. Madonna has a new face, and Lady Gaga has brought back our attention to gender issues, which is interesting.

Who are some younger contemporary musicians you think exhibit smart style sense?
I saw some cool pictures of Karen Dalton on her new record. She was wearing a white sweatshirt, old style jeans, a long braid and was smoking a cigarette.  I think all women dress cool.

Kim Gordon’s collection for Surface To Air is available online and in select stores internationally.