Update: This article has been revised to include the conclusion of the defense’s opening statements, which were presented Wednesday morning.

In a blistering half-hour monologue, a lead defense attorney for Joaquin “El Chapo” Guzmán accused the United States government of setting up his client as a scapegoat. For good measure, he accused the sitting president of Mexico and his predecessor of taking hundreds of millions of dollars in bribes from the man he accused of being El Chapo’s boss.

But in a rare move, the prosecution filed a motion overnight demanding that judge Brian M. Cogan strike the entire statement from the record, calling it “rife with impropriety” and based on “blatantly inadmissible hearsay.”

Guzmán, 61, is battling a 17-count indictment accusing him of operating a multinational drug cartel worth billions, as prosecutors seek to tie him to shipments of thousands of tons of heroin, cocaine, marijuana and methamphetamine into the United States, and accuse him of personally ordering — and in several cases, committing — a slew of murders.

“A vast global narcotics trafficking empire, that’s what this case is about, and what the evidence will show,” Assistant U.S. Attorney Adam Fels told the jury Tuesday afternoon.

“And the kingpin, who ran the organization, who is responsible for these illegal activities? That man,” he added, turning with a dramatic flourish to point at a pale, pudgy Guzmán, as the alleged super-narco hunched over in his seat at the defense table in order to listen to his translator, reacting little to the accusations against him.

Guzmán’s lawyers, however, said they will make mincemeat of the government’s claim that El Chapo was the all-powerful head of the Sinaloa Cartel, but rather a middle manager whose legend served only to make him a scapegoat and let the real bad guys — the officials they bribed — off the hook.

Jeffrey Lichtman, one a lead attorney for El Chapo who once helped get “Teflon Don” John Gotti Jr. out of prison, came out of the gates swinging. Lichtman attacked the government’s case against El Chapo, accusing them of covering for the man he described as Guzmán’s boss, 70-year-old accused drug lord named Ismael “El Mayo” Zambada.

“This is a case that will require you to throw out much of what you were taught to believe in about the way governments work and how they behave,” Lichtman said. “This is a case which will require you to open your minds to the possibility that government officials at the very highest level can be bribed, can conspire to commit horrible crimes; that American law enforcement agents can also be crooked.”

In the government’s motion, filed early on Wednesday morning, the prosecution blasted Lichtman for what it described as defying a court order to stick to admissible evidence in his opening statement, asking Cogan to strike the statement from the record and instruct the jury to disregard it.

At the beginning of the hearing Wednesday morning, Cogan did not grant the government’s wish to strike the entire opening statement, but he did chide Lichtman for relying on hearsay, and instructed the jury to focus only on judging whether or not El Chapo himself is guilty of the charges for which he’s been indicted.

The claims of Mexican corruption were irrelevant to the case, said a visibly annoyed Cogan, who expressed doubt that Lichtman could follow through on his promises to expose the highest levels of government.

“Your opening statement handed out a lot of promissory notes that your case won’t be able to cash,” he said.

Zambada, who is reputedly the current head of the Sinaloa Cartel after Guzmán’s extradition, is still at large despite being named as codefendant in the indictment that El Chapo currently faces, which was issued in 2009.

The indictment lists dozens of drug shipments, some totaling more than 10,000 kilos, allegedly tied to the pair. But according to Lichtman, despite the greater notoriety of Guzmán, El Chapo always answered to Zambada, who managed to fly farther under the radar and avoid capture by aggressively greasing the palms of Mexican officials ranking as high as the presidency.

“While the world focuses on this mythical Chapo figure, the world is not focusing on Mayo Zambada,” Lichtman told jurors, pacing the courtroom.

That’s thanks to “hundreds of millions of dollars” in bribes paid to Enrique Peña Nieto, the current president of Mexico, and his predecessor Vicente Fox, Lichtman said.

Peña Nieto denied the charges in a statement, according to Vice News, and Fox took to twitter to plead his innocence.

Zambada’s son, on the other hand, Vicente Zambada Niebla, has been in U.S. custody since 2010, when he was extradited from Mexico, and pleaded guilty last week to drug trafficking charges in Chicago federal court, records show. The younger Zambada has indicated he is willing to cooperate with authorities against his former allies, and agreed not to fight an order to forfeit more than $1 billion, according to the 19-page plea agreement.

Zambada, 43, admitted to working as a top lieutenant to his father and conspiring with Guzmán and other leaders of the Sinaloa cartel to import more than 450,000 tons of narcotics into the United States. Despite his prodigious career in drug smuggling, which spanned from 1992 until at least 2003, prosecutors recommended an unspecified leniency for the younger Zambada, citing his willingness to cooperate against his former allies, according to court documents.

Lichtman also took aim at the credibility of the government’s witnesses, whose identities remain under wraps, labelling them as untrustworthy mass murderers, and a motley crew of “gutter human beings” seeking a sweetheart deal from the feds and asylum in the United States for themselves and their families. 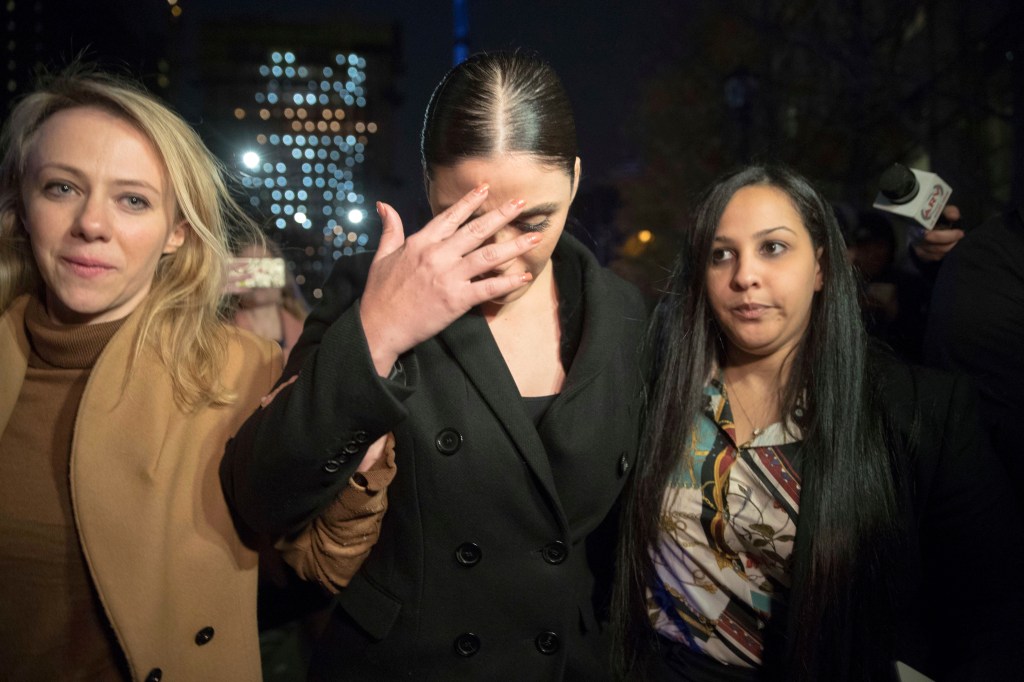 In the final section of his opening statement, delivered Wednesday morning, Lichtman continued to attack the government’s witnesses, apparently trying to appeal to a nativist sentiment in front of a diverse jury that includes several immigrants. “They come to America but they don’t suddenly become human and American and respect the law,” he said.

One witness, Miguel Angel Martinez, had a four-gram-per-day coke habit so severe “it rotted the inside of his nose,” said Lichtman.

“That’s an unbelievable amount of cocaine,” he said. “Enough for four frat parties, combined, in the 1980s.”

Another witness the prosecution plans to call, Lichtman said, had committed at least one murder as recently as 2017.

“Use your common sense,” Lichtman urged the jurors, accusing the prosecution of building its case on a “framework of lies.”

Guzmán, who after two escapes from prison in Mexico was extradited to the United States in 2017, appeared in court dressed in a navy blue suit and a blue-and-gray checked tie. As he entered the courtroom, he methodically pumped the hands of his defense team, and waved with an awkward sweep of his hand to his American-born, beauty-queen wife, Emma Coronel Aispuro, who sat in the second row of the gallery in a silky pantsuit. Coronel, who had been chatting with her husband’s former public defender, grew quiet, and appeared concerned at the figure cut by her once-powerful mate. The couple’s twin daughters, who had shown up to previous court appearances, were not in attendance on Tuesday.

Guzmán faces life in prison if convicted, and the government claims to have a wide array of documents tying him to specific drug shipments — including one bust right down the street in Brooklyn — as well as a small army of former associates willing to testify against him.

Flashing a slideshow of drug busts to the jurors, Fels told the court that just a handful of shipments of Chapo’s drugs seized by the feds added up to a line of coke for every man, woman and child in the country.

The opening arguments came after a day of delays and logistical nightmares after one juror, who last week staged a tearful “open rebellion” against Judge Brian M. Cogan after being selected as one of the 12 jurors. On Tuesday morning, within minutes of taking the bench, Cogan revealed that the woman had claimed to be suffering from a variety of medical issues as a result of stress from her jury placement. Another juror, Cogan told the court, had requested to be removed because he is self-employed and would not be able to afford not working throughout the trial, which could last up to four months.

Despite initially dismissing the man’s concerns because he had not raised them previously, Cogan agreed to release both jurors from duty and recessed the court so the defense and prosecution could, once more, individually vet potential jurors to replace them.

That’s when things got weird for the dozens of reporters present, who had packed into the courtroom and filled an overflow room next door. Due to safety concerns, the United States Marshals Service, which is overseeing security for the trial, initially told reporters that anyone leaving the court or the overflow room to use the bathroom, get food or make a phone call, would be forced to give up their seats to one of the dozen or so stragglers who had not made it into either room.

Eventually, the Marshals began to let reporters out one at a time to use the bathroom, but only after a writer for The Daily Beast made an impassioned plea to court officials, arguing that the restrictions made it impossible for any members of the press with a bladder condition, diabetes or other disabilities, to do their jobs.

Finally, after about five hours of waiting, the defense and prosecution returned after moving two alternate jurors to the jury panel and adding two new alternate members, and a visibly peeved Judge Cogan swore the jury in and set the trial in motion.

Lichtman finished his opening arguments in defense of Chapo on Wednesday morning.