Popular underground singer-songwriter and artist Daniel Johnston (whose struggles with manic depression are immortalized in the 2005 documentary The Devil and Daniel Johnston) has released a new interactive comic book and downloadable game application. Entitled Space Ducks, and available as a free iPad app from Apple’s App Store, the program brings the troubled indie pioneer’s artwork to life as a playable graphic novel for mobile devices.

Featuring visual styling by the popular folk figure – whose famous fans include the likes of the Flaming Lips, Death Cab for Cutie and The Simpsons creator Matt Groening – the program is equal parts video game and album. By playing through each level of the artist’s high-tech comic (his first), which includes subversively-styled Space Invaders clones and animated film shorts, users can unlock all the music from his new record. Meant for use as a companion with BOOM! Town’s actual physical graphic novel of the same name, the Space Ducks app offers a mix of voice-overs, video clips and digital diversions. Extras also include hidden Easter Eggs featuring cameos by several of the high-profile musical artists who number amongst Johnston’s fans.

Created by advertising agency Wieden + Kennedy, the app is designed to provide a unique alternative venue for the longtime outsider’s equally singular work. Johnston is no stranger to the iOS format, though, having previously developed the well-received psychedelic puzzle and arcade game Hi, How Are You for the iPhone, which currently retails for $2.99.

While many artists such as Björk, Sting and Dave Mustaine have released dedicated apps, few have taken such a left-field approach to publishing and actual song integration. The approach fits Johnston’s off-kilter milieu well. 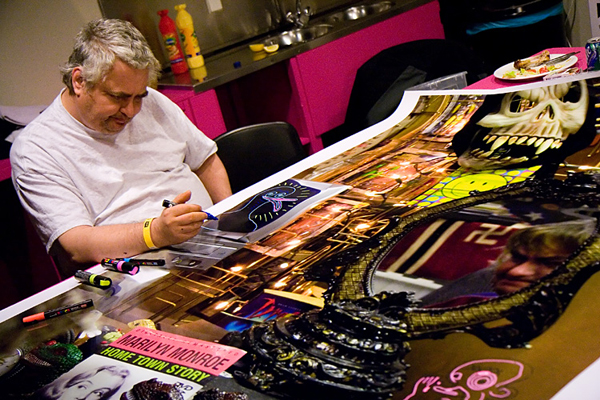