Even under the best of circumstances, the first few days of the month, when rent is typically due, is a difficult time for many. Of course, these are not the best of circumstances, and with many people across the country currently out of work due to the COVID-19 pandemic, April 1st, 2020 carried with it a particularly urgent sense of dread. That’s especially true in New York City, where the pandemic has hit especially hard and where members of low-income communities of color are bearing the brunt of the impact.

This is the primary takeaway from Department of Health and Mental Hygiene data, as captured by an infographic made by the Association for Neighborhood and Housing Development (ANHD), a coalition of more than 80 community-based organizations across New York City working on housing and economic justice. Based on the data about the number of positive cases in the five boroughs, the map delineates which neighborhoods in New York are being hardest hit by the pandemic — and it’s overwhelmingly lower-income communities in the outer boroughs, which are disproportionately made up of black and brown people working service industry jobs. Those neighborhoods also tend to have the highest rent burden, meaning the highest percentage of people who pay more than 30% of their income on rent.

Should You Wear a Mask to Fight Coronavirus? A Top Doctor Weighs In, Angry It Has Come to This

“This is a public health crisis, but it’s also a housing justice crisis and an economic crisis and a racial justice crisis,” says Lena Afridi, the director of policy for ANHD. “This is the point where every single piece of infrastructure we thought we could rely on is starting to crumble, and the people most impacted are the most marginalized. And those are the people we have asked to be on the front lines.”

In western Queens, for instance, where Elmhurst Hospital (recently profiled by the New York Times as an epicenter of the pandemic, where conditions are reportedly “apocalyptic”), the number of ER visits for flu-related symptoms (which are characteristic of COVID-19) is 6.4 times higher than the total city average. Thirty-five percent of the total population is defined as service workers, meaning that they work in the health care support, food prep and serving, or building cleaning and maintenance industries, while 61% of the neighborhood is rent-burdened. It’s also the third most overcrowded neighborhood in New York City, per 2018 data. 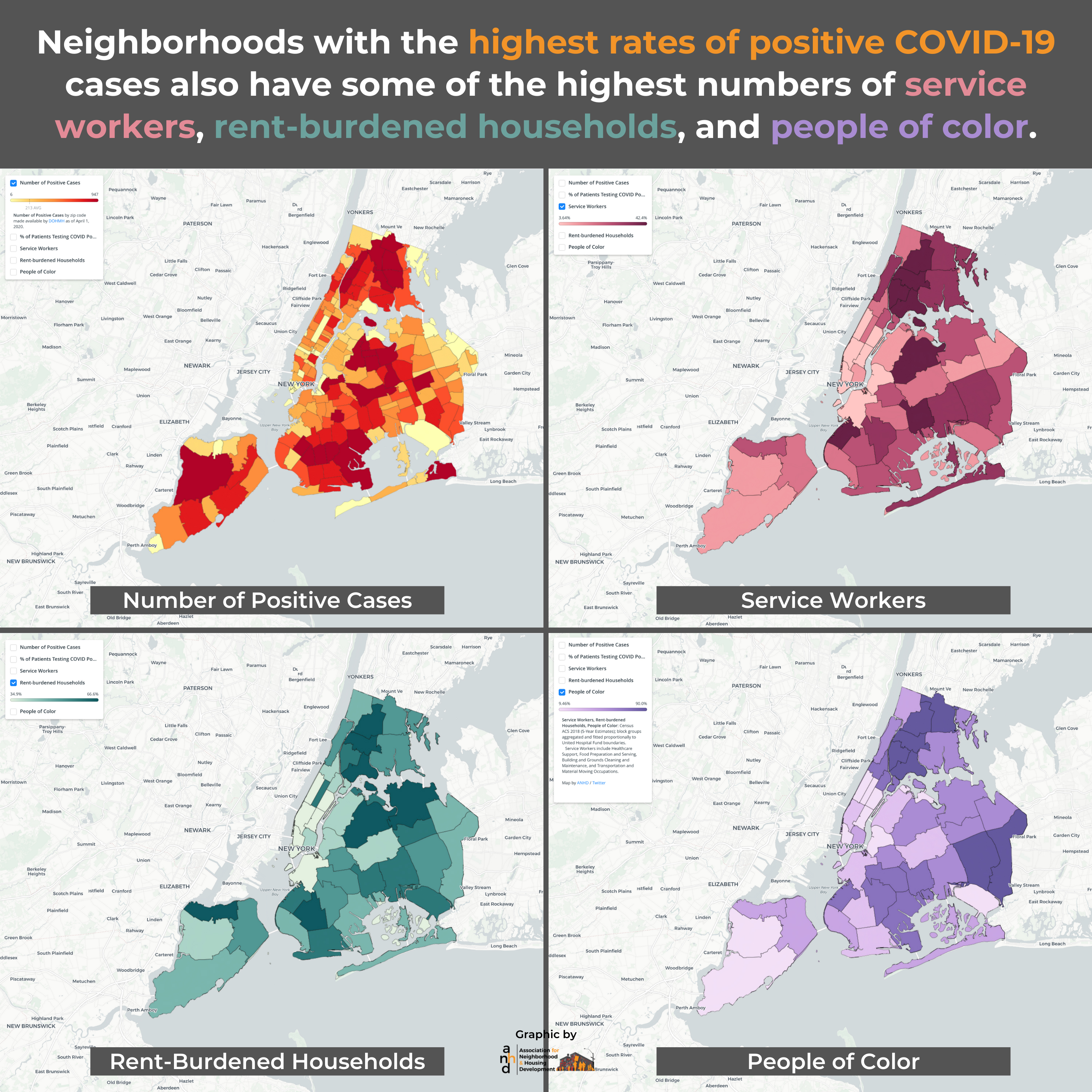 Association of Housing and Neighborhood Development

The overcrowding rate is particularly significant, says Afridi, when you consider how much public health experts have stressed social distancing as a method of curbing the spread of the disease. “When you go home and share an apartment with three or four other people, you can’t go home and self-isolate. That’s just not gonna happen,” she says. “That part of it does sort of get glossed over” when it comes to discussing COVID-19 transmission prevention.

On the other hand, Manhattan, which is home to nine out of 10 of the city’s wealthiest neighborhoods, has the lowest number of confirmed COVID-19 cases. “There are fewer service workers who live there. Residents can likely get their groceries delivered and don’t need to leave the house,” says Afridi. “They have a lot less exposure than people on the front lines.”

The concept that the pandemic has highlighted already-pronounced social and economic stratification is not exactly a new one, though some appear to be more sanguine about it than others: In response to a question about why asymptomatic celebrities were able to procure COVID-19 testing kits, for instance, President Trump responded, “Perhaps that’s been the story of life.”

And in a report published last week, the New York Times wrote of a “pandemic caste system… rapidly developing” in the city, in which the wealthy fled to their second or third homes while middle-class professionals hole up in their apartments and work remotely. “The working class are on the front lines of the economy, stretched to the limit by the demands of work and parenting, if there is even work to be had,” the story read.

As the current epicenter of the virus in the United States, New York is the first stage upon which this dynamic is unfolding — but that’s not to say that it will be the last. Nor is it to say that workers aren’t resisting their current conditions: employees at InstaCart and Amazon, for instance, just started striking against low compensation and unsafe working conditions.

Afridi says there are tangible changes that could be made to relieve the burden on low-income communities, such as rent relief, hazard pay for workers in essential services, and expanded definitions for unemployment for gig economy workers. (Gov. Andrew Cuomo has moved somewhat toward relieving the rent burden by issuing a 90-day moratorium on evictions.) Yet despite celebrities’ airheaded claims that the coronavirus is an “equalizer,” the map illustrates in stark relief that it is anything but.

“We are at a fundamental moment where we’re seeing everything we set up start to unravel, and it’s abundantly clear who is going to be impacted first and the worst. And those are the people that it’s been decided should be taking the risk to provide for themselves. No one should have to decide between paying for food for their family and a place to live, or their life. Yet that’s the situation we’re in,” Afridi says. “It has been very, very hard to see.”