Clint Eastwood is riding high after winning a $6.1 million default judgment against a Lithuanian company that falsely claimed he endorsed a line of CBD gummies.

“I am pleased with the Court’s ruling, and believe this judgment sends a powerful message to other online scammers who might try to illegally use someone’s name and reputation to sell their products,” Eastwood said in a statement to Rolling Stone.

A federal judge in Los Angeles awarded Eastwood and his company Garrapata $6,094,565.33 in monetary damages on Friday. The Oscar winner previously asked for $30 million, but the court shot that figure down in June, leading Eastwood to circle back with the lower figure granted Friday.

U.S. District Judge R. Gary Klausner agreed that $6 million is what Eastwood reasonably would have charged Lithuania-based Mediatonas UAB to endorse a product for a 16-month online campaign, considering he rarely lends his image to commercial endeavors. “Mr. Eastwood’s name and likeness have only been licensed once, for a single Super Bowl commercial ‘themed around America’s resilience and recovery from the Great Recession,’” the judge found, according to minutes of the Friday hearing. And the actor only agreed to take part in the Super Bowl ad because “he felt strongly about its subject matter: job growth and the spirit of America,” the court said.

'Cry Macho': A Clint Eastwood Movie That Shoots Right to the Heart

The judge further found that Eastwood could have charged a premium to endorse the CBD line at the center of the legal dispute because it was “unknown” and thus would rely more heavily on his star power — and possibly “jeopardize his reputation.”

Eastwood, 91, first brought the underlying trademark infringement and defamation lawsuit last year, without yet knowing the identity of Mediatonas. After subpoenas were issued, he named the company in an amended complaint in February. The company failed to respond to a summons a month later, setting the stage for the default judgment.

The Dirty Harry actor claims Mediatonas owned the websites ushealthynews.com and usmagazinetrending-news.com, where it hosted a “false, defamatory, and wholly fabricated” article about him to promote and sell cannabidiol (CBD) products. The fraudulent article — titled “Big Pharma In Outrage Over Clint Eastwood’s CBD: Sera Relief CBD Gummies – He Fires Back With This!” — was included as an exhibit in Eastwood’s filings. 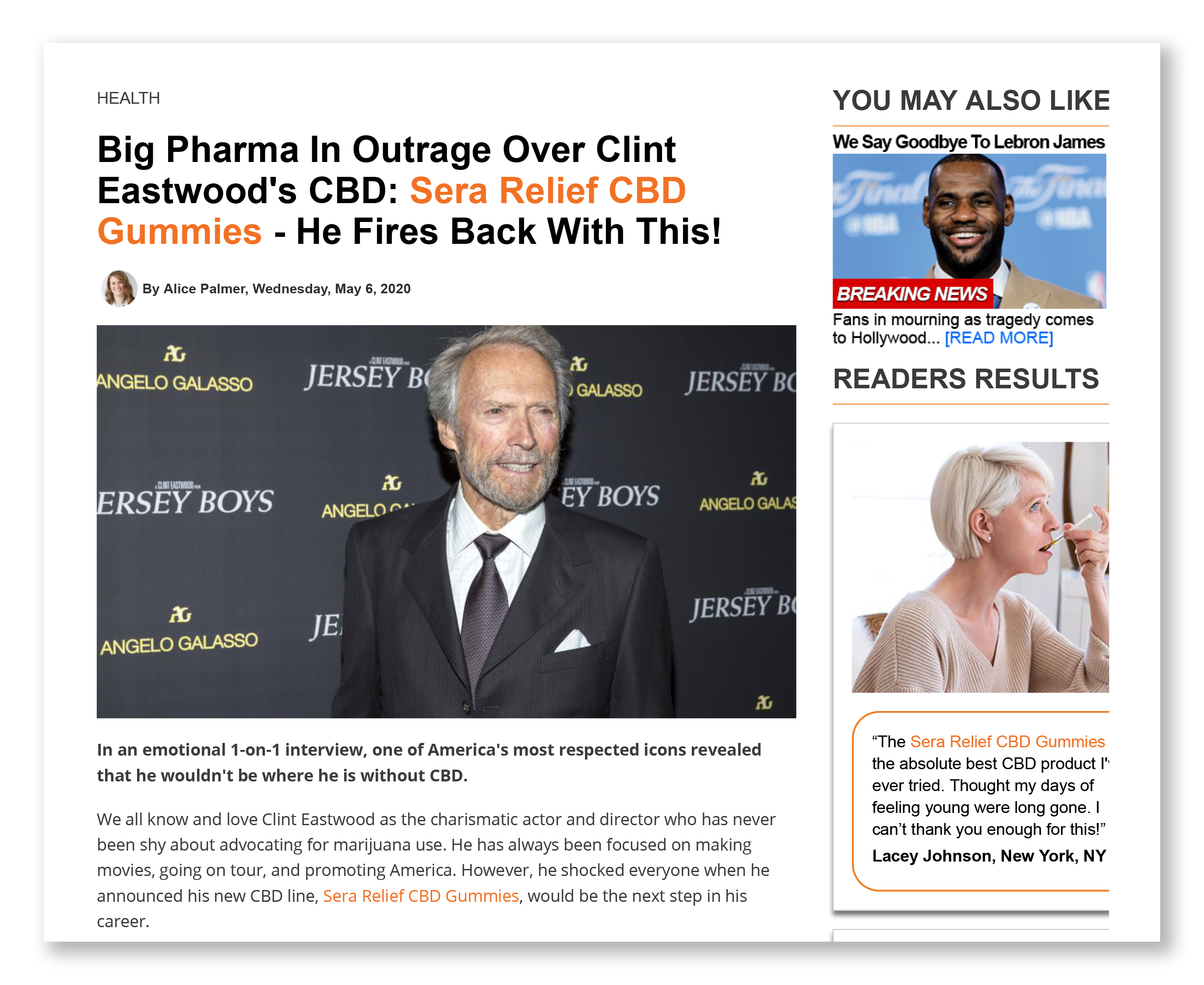 “In truth, Mr. Eastwood has no connection of any kind whatsoever to any CBD products and never gave such an interview,” the complaint reads.

Attempts to reach Mediatonas were not successful Monday.

“Over a career that has a spanned more than sixty years, Mr. Eastwood has earned a reputation for honesty, hard work, integrity, and public service,” Eastwood’s attorney, Jordan Susman, said in a statement to Rolling Stone. “He is also willing to do what is right and what is fair. In pursuing this case, and obtaining this judgment, Mr. Eastwood has again demonstrated a willingness to confront wrongdoing and hold accountable those who try to illegally profit off his name, likeness, and goodwill.”