CES Round Up: The Best Electronic Devices - Rolling Stone
× 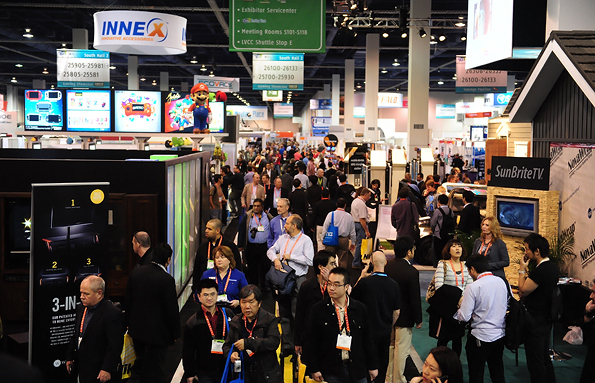 “This year’s event was more of an evolution than revolution,” says Tim Stevens, editor-in-chief of Engadget. “Common themes included bigger and thinner TVs, faster phones and mobile devices… pretty much the same as every year.” With worldwide gadget revenues expected to top $1 trillion this year for the first time in history, consumer electronics are clearly on an upward trajectory. But with hardware profits shrinking for manufacturers of marquee products like computers and television sets, growing global competition and suddenly endless purchasing options, these numbers may be deceiving.

“Differentiation will be crucial going forward,” explains LG spokesperson John Taylor, who points to the sudden explosion in interest in downloadable apps on so-called “smart” (internet-connected) TVs, despite the ready availability of this technology in years prior. From streaming services like Acer’s AcerCloud, Samsung’s AllShare Play or Lenovo’s “personal cloud” vision (which allows for multimedia sharing across screens big and small) to motion and voice control, contemporary features aren’t being added for wow factor alone. Facing increasing pressure to stand out in a crowded marketplace while slashing costs, major players such as Vizio, Sony and Panasonic are cribbing pages from popular services like Apple’s iCloud or motion- and speech-enabled gizmos, e.g. Microsoft’s Kinect.

“Big trends currently include wireless connectivity, streamlined user interfaces and centralized content storing services that make it effortless to push music and movies between stationary and mobile electronics,” says Sharp’s senior marketing manager, Bob Pleyer. Happily for everyday shoppers, simplicity and ease of use are paramount, he insists. But whether such helpful extras will actually convince buyers to pony up en masse, or register for a multitude of proprietary cloud solutions on as many devices, remains considerably less certain.

“While fun to discuss and debate, I don’t necessarily think that these things are really driving sales,” says Engadget‘s Stevens. “People aren’t really going to the store looking for apps on their car or living room set. But these types of features help manufactures distance themselves from one another. If you’re standing at Best Buy and one TV streams down movies from Netflix, but the other doesn’t, it may be an added bonus that helps sway your ultimate decision.”

Incremental gains appear to be the order of the day, agrees BBC tech reporter Matt Danzico, who suggests that big manufacturers may actually be afraid to introduce new innovations. Citing 3D TV’s introduction as an example, he points out that with shoppers still slow to embrace yesterday’s news, timing is ill-advised to introduce tomorrow’s groundbreaking technologies.

However, with an estimated 20,000+ high-tech products having been introduced at the this year’s expo, there’s certainly no shortage of innovation to pique one’s interest or spark the imagination. As Consumer Electronics Association (CEA) president Gary Shapiro recently told ShanghaiDaily.com, “We are in the middle of a technology revolution.” The good news for Luddites is that rather than expensive hardware add-ons or premium extras like 2D to 3D upscaling, today’s mandate instead seems to be pushing features and devices that cost-effectively enhance everyday life.