Amnesty International’s Belgian office has a new campaign that shows celebrities and dignitaries, including Karl Lagerfeld and the Dalai Lama, covered in bruises and scars to illustrate its new slogan: “Torture a man, and he will tell you anything.” Notable among them is Stooges frontman Iggy Pop, whose left eye is swollen shut alongside lacerations all over his face. And just what was it the proto-punk icon was tortured into saying? “The future of rock & roll is Justin Bieber,” according to The Guardian, who translated the sign from French.

How Amnesty International Rocked the World: The Inside Story 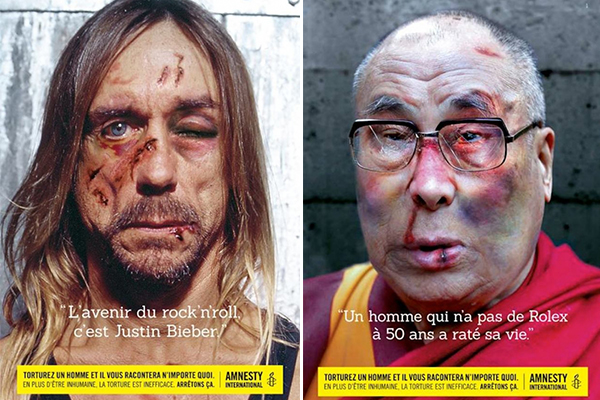 “We can’t imagine Iggy Pop saying that Justin Bieber is the future of rock & roll,” Philippe Hensmans, director of Amnesty International’s French-Belgian section, told the paper. “Governments that use torture…claim these techniques give them precious information, but history has shown that tortured people are usually willing to say anything at all to make the pain stop.”

Whoever “tortured” fashion designer Lagerfeld for the ad was able to get him to say, “The height of elegance is a Hawaiian shirt with flip-flops.” And some cruel heart coerced the exiled Tibetan leader, who preaches selflessness, into saying, “A man who does not have a Rolex watch at 50 years old has failed in his life.”

The Guardian notes that it is not immediately clear whether or not the persons of note in the ads agreed to let Amnesty use their likeness. The human rights organization also has not revealed whether or not it would expand the campaign beyond Belgium.