Attention Potterheads: Harry Potter is alive and well on, of all places, Broadway. Let me explain. As the world knows by now, author J.K. Rowling didn’t sneak out an eighth Potter book or a ninth movie while you weren’t looking. Harry Potter and the Cursed Child is a play (not a musical – Rowling doesn’t like musicals), a live performance piece that Rowling cooked up under the wands of playwright Jack Thorne and director John Tiffany.

First produced in London in 2016 – shattering ticket sale records – The Cursed Child has just opened on the Great White Way, where you pay to watch this benchmark experience in two parts (five hours-and-15 minutes total) available to see on a single day or on consecutive evenings. It’s not a rehash of the books and movies, it’s a thrilling continuation of the Potter saga, 19 years later, with Harry – now 37 (gulp!) – sending his middle child, Albus, off to Hogwarts to make his own way in the wizarding world.

After the show, audience members are issued buttons inscribed #KeeptheSecrets (though the play is available in (best-selling) book form). So under fear of Voldemort-level retaliation, I will tread carefully over a minefield of plot twists. But know this: The Cursed Child is a triumph of epic proportions, not only heaven for Potterheads, but a marvel of stagecraft that will soon be the stuff of legend. Tony voters won’t be able to resist it. Even when the exposition starts to weigh on the pacing, director Tiffany and illusionist Jamie Harrison lift the show with visions of pure enchantment that send shivers down your spine when they’re not breaking your heart.

The story – dark, dazzling and more soulful than anything on screen – picks up where the final book (Deathly Hollows) left off, with Harry (a stellar Jamie Parker) and wife Ginny (Poppy Miller) shipping off teenaged Albus (a terrific Sam Clemmet) to Hogwarts from the magical Platform 9 ¾ at King’s Cross station. Named Albus Severus, after Harry’s two dead Hogwarts heroes, Dumbledore and Snape, the boy buckles most under the shadow of his famous father, whom he can’t connect with as a son. Harry is also living in his own shadow, taking orders at the Ministry of Magic from the adult Hermione (Noma Dumezweni), who lovingly suffers the unstoppable silliness of her husband Ron Weasley (the appealingly befuddled Paul Thornley). Remember in their youth when Ron told Hermione, “You are a girl” and she replied acidly, “Oh, well spotted.” They’re still those people in middle age. Will you ever be able to get the film images of Daniel Radcliffe’s Harry, Rupert Grint’s Ron and Emma Watson’s Hermione out of your head? It won’t be easy. But Parker, Thornley and Dumezweni sneak up on you with an alchemy all their own. 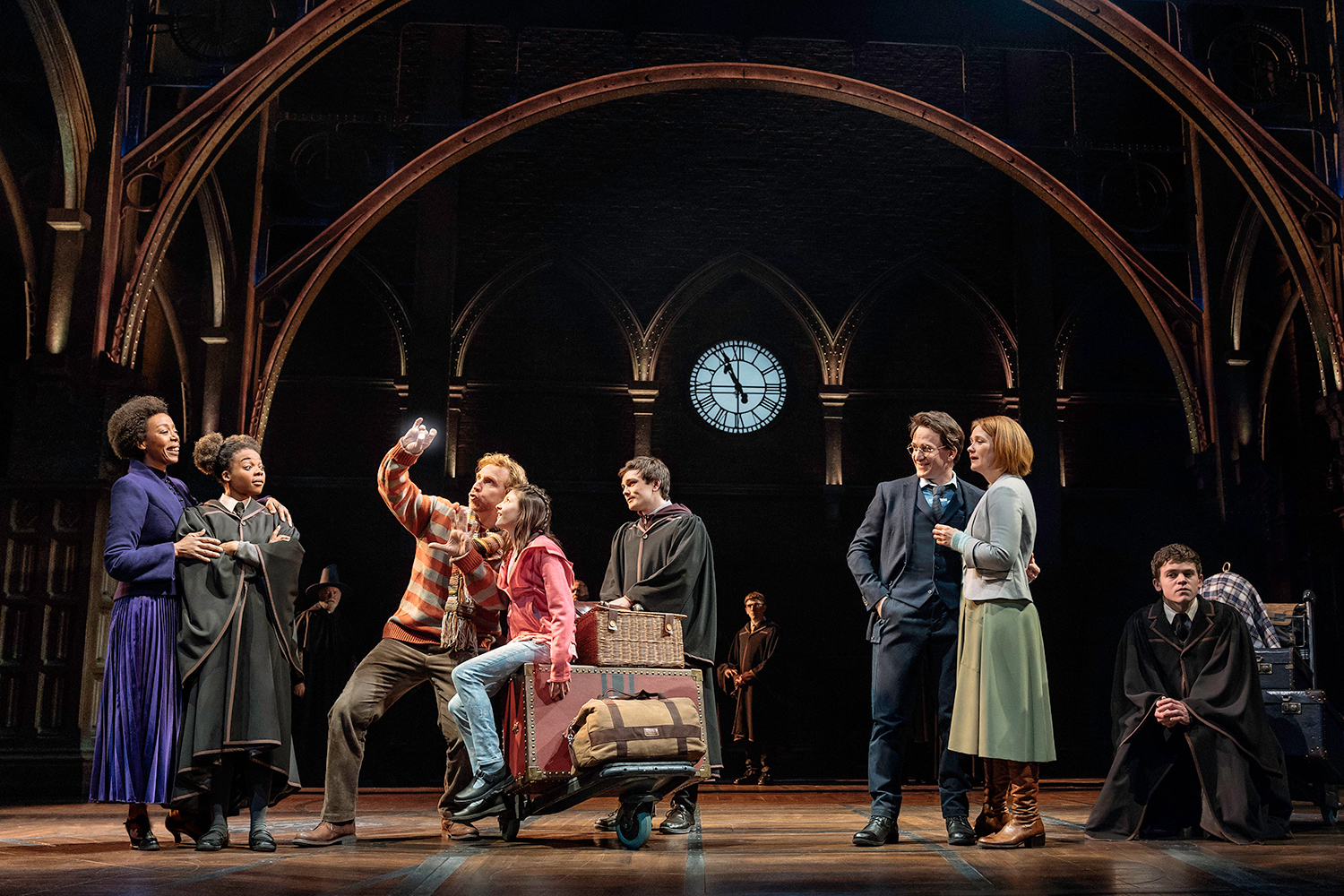 All the actors come up aces, with special praise going to Anthony Boyle, spectacular as the geeky, girl-crazy, desperately lonely Scorpius Malfoy (Anthony Boyle), the son of Harry’s one-time arch enemy Draco Malfoy (Alex Price) and the target of rumors that He Who Cannot Be Named may be his real father. No wonder Scorpius and Albus find each other at Hogwarts – they’re misfits saddled with daddy issues and determined to prove themselves. Their vehicle for success, they think, is stealing a forbidden time turner and rescuing Cedric Diggory (Rob Pattison on screen, Benjamin Wheelwright on stage), who died needlessly under young Harry’s watch during a championship game of Quidditch. The message here is don’t even try turning back the clock (a dominant, tick-tocking stage motif), it’ll screw with your mind and raise ghosts from the past, both literal and figurative.

To erect a Trump-sized wall against spoilers, I’ll say only that eyes will pop and jaws will drop at the theatrical wizardry, from duels with wands that spout fire to bodies transfiguring and Dementors flying overhead. But it’s the play’s emotions that wallop you with the tender magic of simple human connection. Who is the cursed child? Harry, Albus, Scorpius, even Delphi (a superb Jessie Fisher) whose parentage remains a mystery until, well, it isn’t. The Cursed Child will inspire wonder and debate in muggles and Potterheads alike. And if Rowling wishes it so, it’ll make a hell of a movie. But right now, Harry Potter and the Cursed Child seizes the stage by divine right. Like it belongs there. Like it doesn’t want to leave. It’s more than the best new play of the season. It’s some kind of miracle.