May the 4th Be With You: Best Star Wars Toys, Collectibles and Gifts - Rolling Stone
×
×

From here in the U.S. to galaxies far far away, May the 4th is now known universally as “Star Wars Day,” thanks to a pun on that famous Star Wars quote, “May the force be with you.”

According to StarWars.com, the first notable occurrence with the May 4th pun took place on that date in 1979, when Margaret Thatcher took office as the new British Prime Minister. Thatcher’s Conservative party took out an ad in The London Evening News to congratulate her, saying “May the Fourth Be with You, Maggie. Congratulations.”

Since then, “Star Wars Day” has been celebrated around the world, with fans gathering to re-watch the movies (stream them all here), participate in cosplay, and to show off their Star Wars toys and collectibles at makeshift conventions. Brands are also getting in on the action, offering limited-edition collaborations inspired by everything from Sith Lords to lightsabers.

Whether you’re part of the Rebel Legion, a serious collector, or just a casual fan, here are ten pieces of Star Wars merch to pick up. Shop quickly: the demand — and force — is strong with many of the items on our list, and you’ll want to sang them before they’re sold-out.

These backpacks and bags from Herschel Supply Co. will take you to the dark side no matter where you go, with a black finish and liner design inspired by Darth Vader’s armor and helmet. The red accents, meanwhile, are reminiscent of his iconic lightsaber.

This official Star Wars collaboration includes functional elements, like the magnet fastened straps and air mesh back padding on the “Darth Vader” Little America Backpack. The set ranges from XL backpacks, duffle bags, and hip packs, to crossbody bags and mini backpacks. Herschel also offers Boba Fett and Stormtrooper-inspired bags in this collection, as well, so there’s something for everyone who loves these great galactic villains. 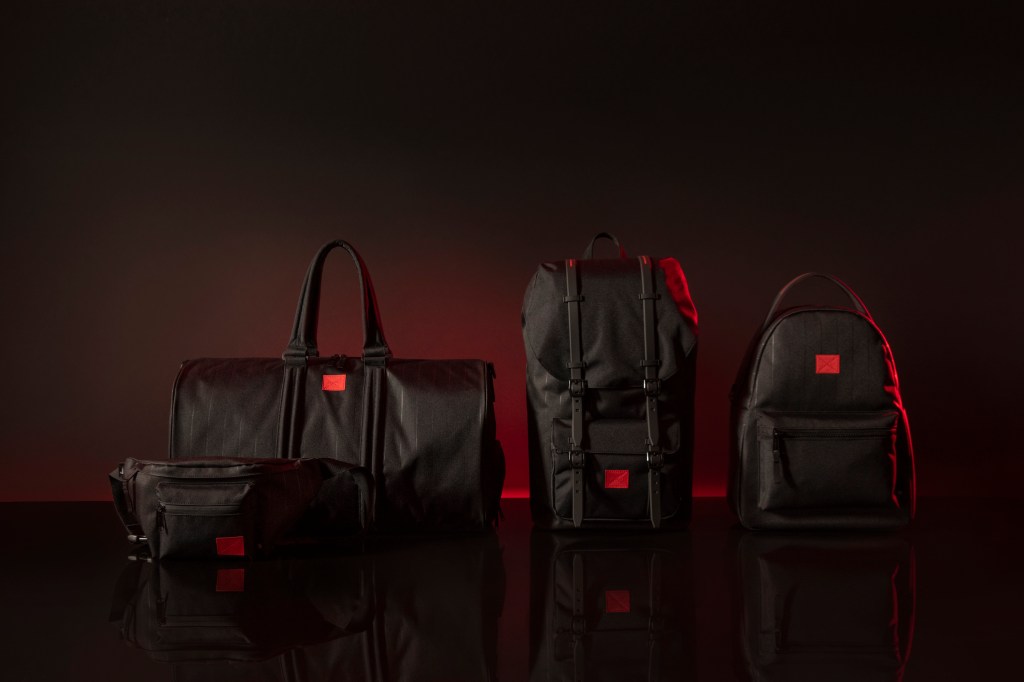 Unisex loungewear and sleepwear brand, MeUndies is known for its fun, irreverent releases and we like their official Star Wars collection, which includes onesies and lounge pants for men and women in three Star Wars-inspired prints. Choose from neon lightsabers, “Death Star Disco,” or “Yub Nub” (named after the Ewok celebration song playing at the end of Star Wars: Episode VI – Return of the Jedi). 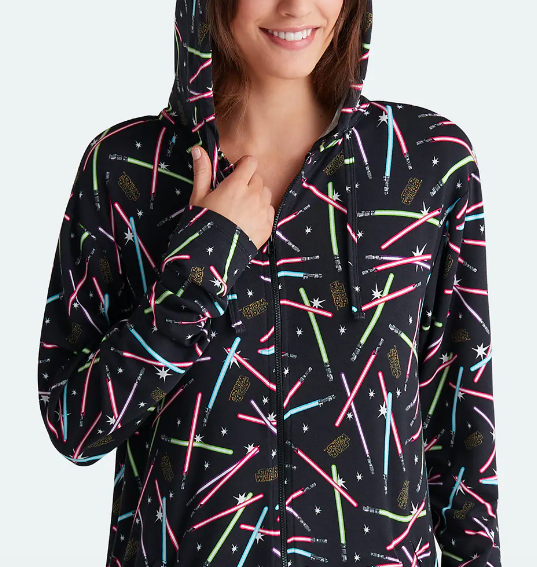 The Art of Star Wars: Galaxy’s Edge gives an inside look at the creation of the Star Wars-themed lands at Disneyland Resort and Walt Disney World Resort. The book features hundreds of full-color concept artworks, sketches, blueprints, photographs, and more, including the creative process that Disney’s Imagineer’s took in developing the immersive park.

Spanning 256 pages, the hardcover artbook also includes exclusive interviews with the lands’ designers on how they brought the universe of Star Wars to life. Die-hard theme park fans and Star Wars aficionados alike will appreciate this behind-the-scenes look at Galaxy’s Edge. 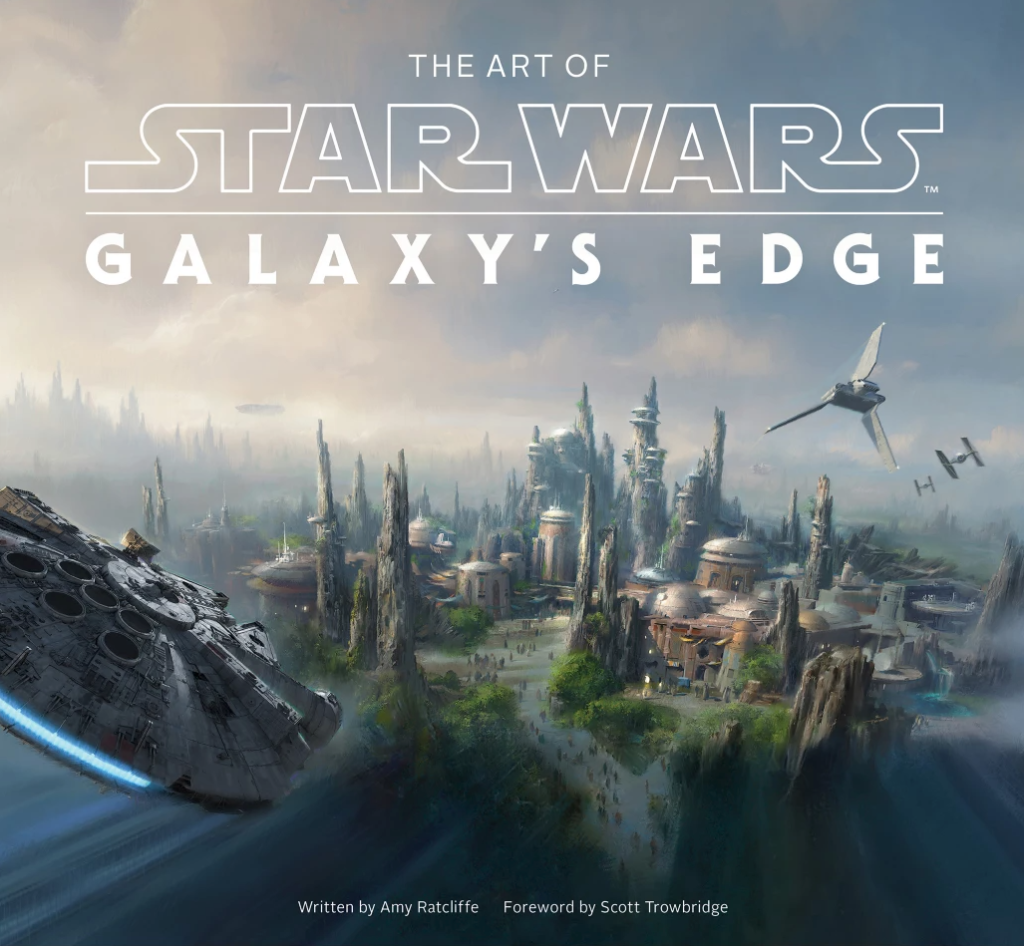 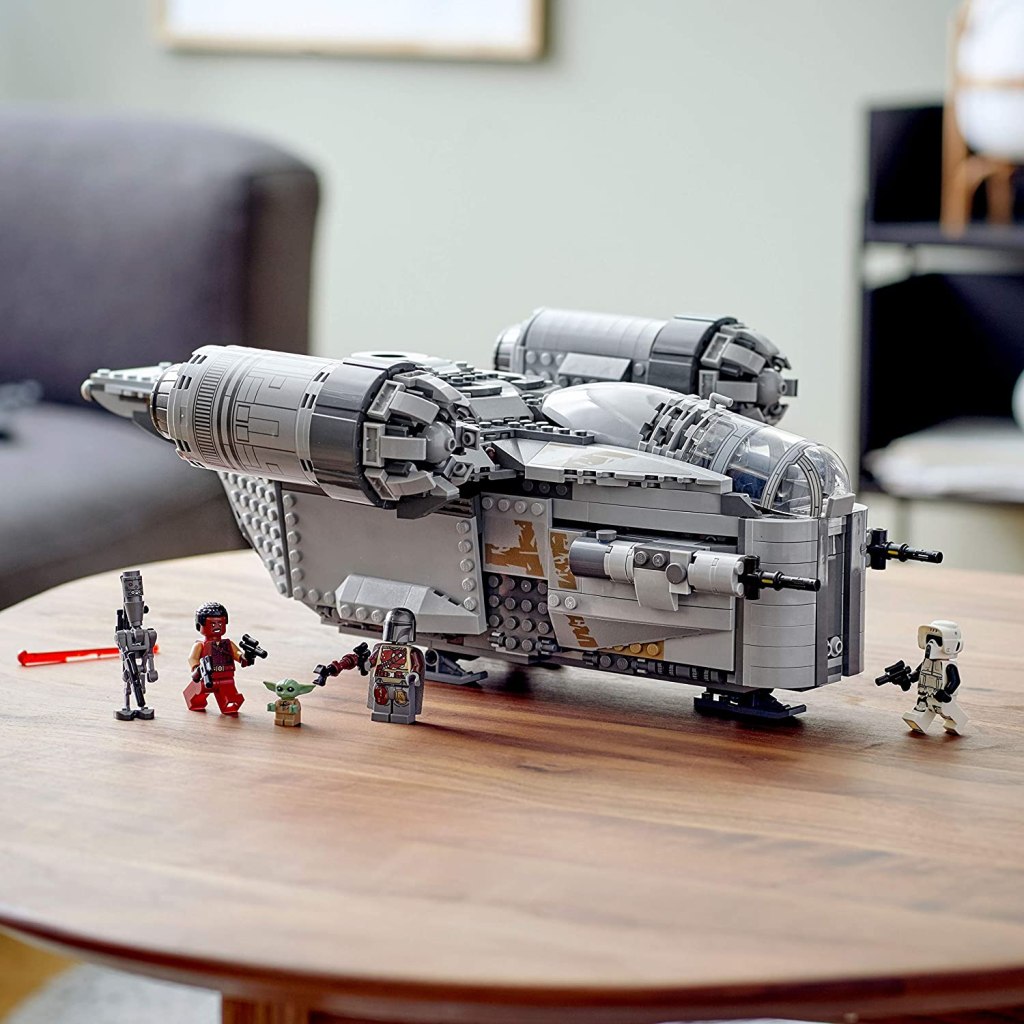 LEGO released their first Star Wars-themed set in 1999. Two decades later, LEGO has released hundreds of Star Wars sets, with many of them — especially first editions — now fetching thousands of dollars on eBay.

This exclusive set features a model of the 75292 Razor Crest starship model, which made its first appearance in The Mandalorian, streaming now on Disney+.

The set includes the Razor Crest with a dual minifigure cockpit, 2 spring-loaded shooters, cargo hold with opening sides, access ramps and carbonite bounty elements inside, as well as four LEGO Star Wars figures: The Mandalorian, Greef Karga, Scout Trooper and Grogu. There are 1,023 pieces in total, great for display or as a playable toy. 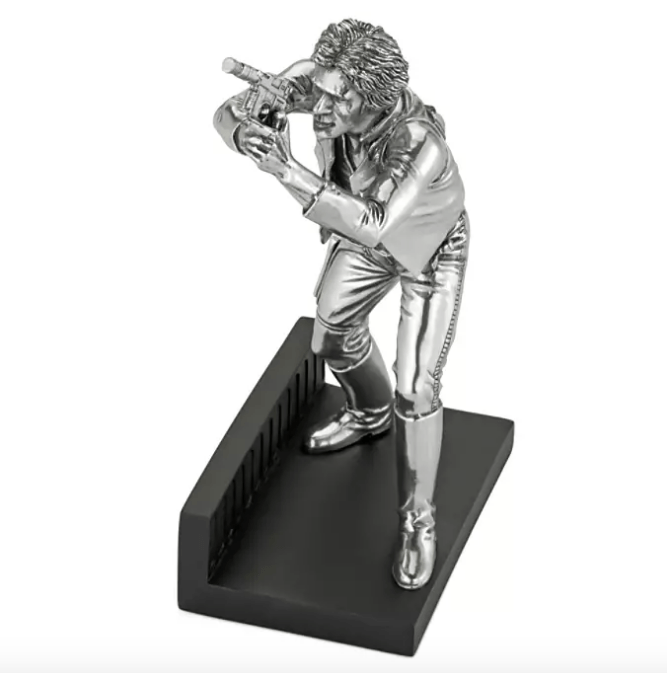 Serious collectors will want to check out the shopDisney’s new selection of Star Wars merch, which ranges from T-shirts to toys. We like this limited-edition Han Solo figure, inspired by Harrison Ford’s appearance in the franchise and featuring an authentic costume and facial expressions. Limited to just 5000 units, this figure was entirely sculpted, molded and painted by hand, and includes incredibly intricate details. The figure measures 8 1/4” H (including base) x 6 1/4” W x 3 1/6” D and is a true keepsake and collector’s item for fans of Ford — and the film. 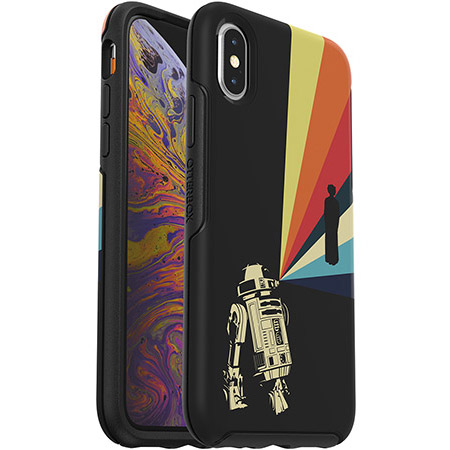 The popular Otterbox cell phone cases are now available in Star Wars-themed designs, including this R2-D2 graphic made from durable materials. Otterbox cases have an ultra-slim, one-piece design, and offer significant drop protection for whatever the galaxy throws at it. The screen bumper also has a raised edge that helps protect your touchscreen.

Their Galactic Collection features prints from all across the Star Wars franchise, with different options for iPhone and Samsung Galaxy smartphones. In collaboration with Alexa accessories, you can also bring the Star Wars saga home with their Mandalorian Echo Dot Stand featuring Grogu’s adorable design. 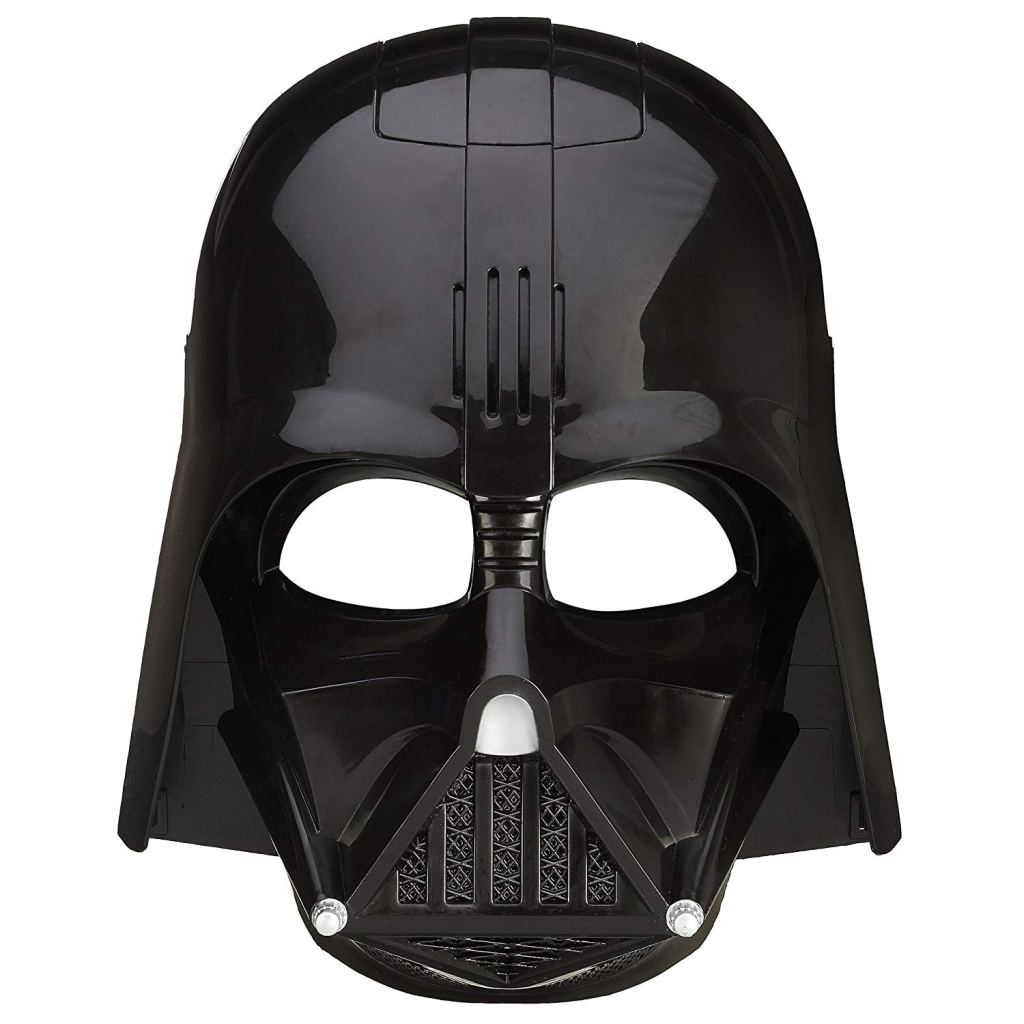 One of the most popular items online is this Darth Vader Voice Changer Mask. Based on the Dark Lord’s iconic black helmet from The Empire Strikes Back, it features discreet buttons that let you change your voice to sound like Darth Vader. You can also select special sound effects, like Vader’s deep, heavy breathing. The helmet measures just over 12 inches and runs on three AA batteries. 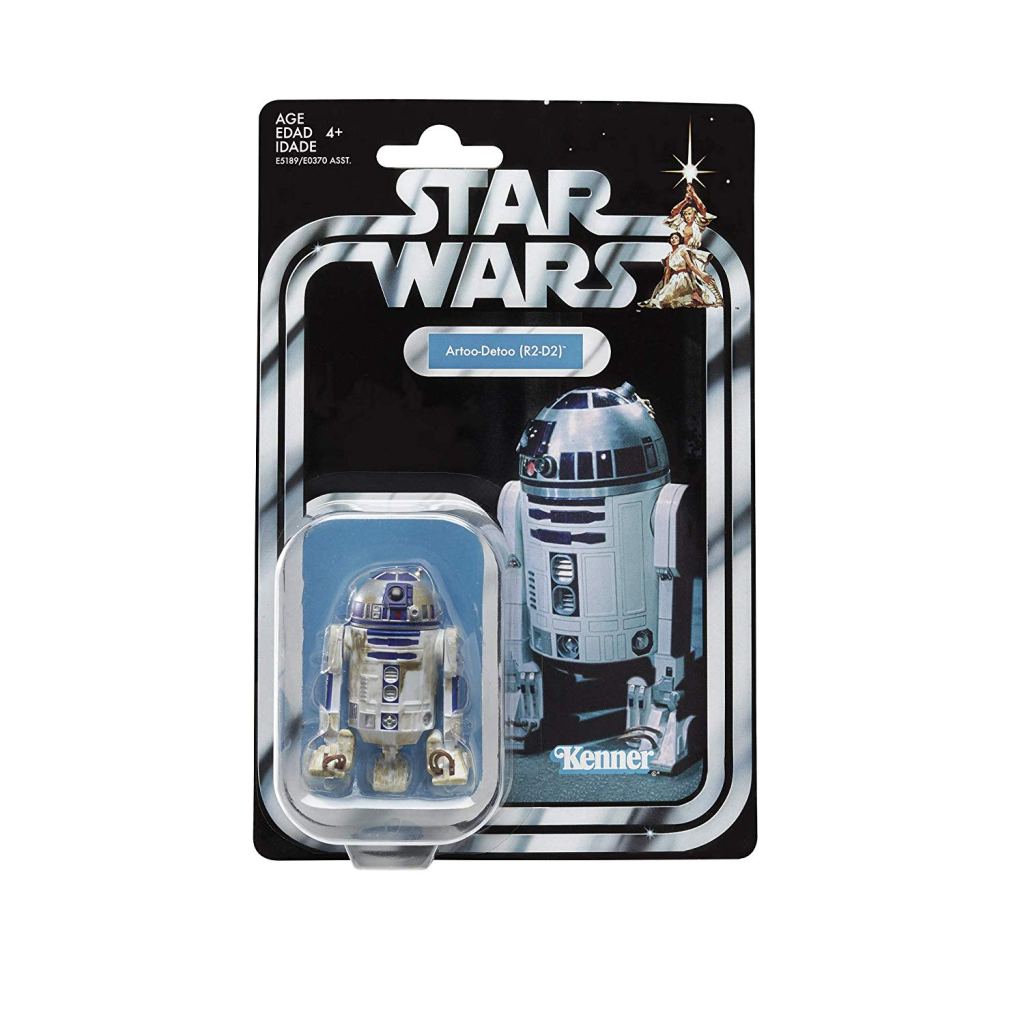 Take advantage of Star Wars Day on Amazon and snag one of these Star Wars Vintage Collection action figures. We like this classic R2-D2 figure, which measures 3.75 inches tall and features many of the original details from when the toy was first launched by American toy company, Kenner Products, in the 80s.

What we like: the retro-inspired packaging and the incredible attention to detail on each figure, which features six different points of articulation. 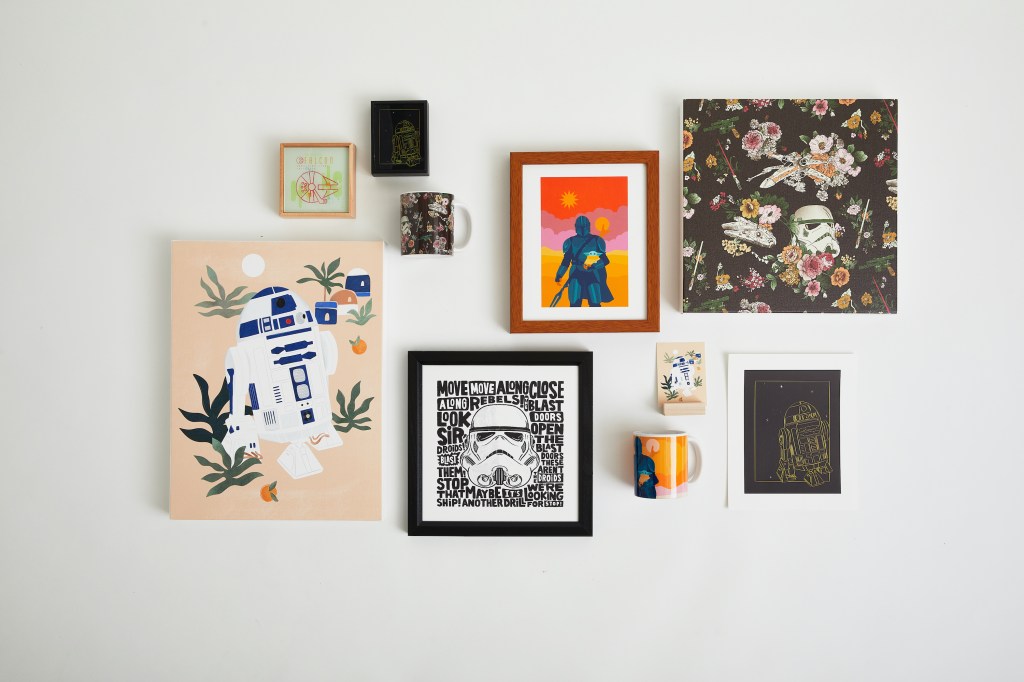 From a galaxy far far away and into your own home, Society6 has teamed up with Disney to create a Star Wars design collection for home goods.

The officially-licensed collaboration features a “fleet” of Star Wars artwork created by independent artists (such as Maggie Stephenson, Josh Ln, and Matthew Taylor Wilson) from the Society6 community. Beloved characters from the Skywalker Saga come to life with several prints featuring Storm Troopers, droids, and members of the Dark Side alike.

Society6 says new designs will be added in the future, so keep your eyes peeled for more intergalactic artworks. 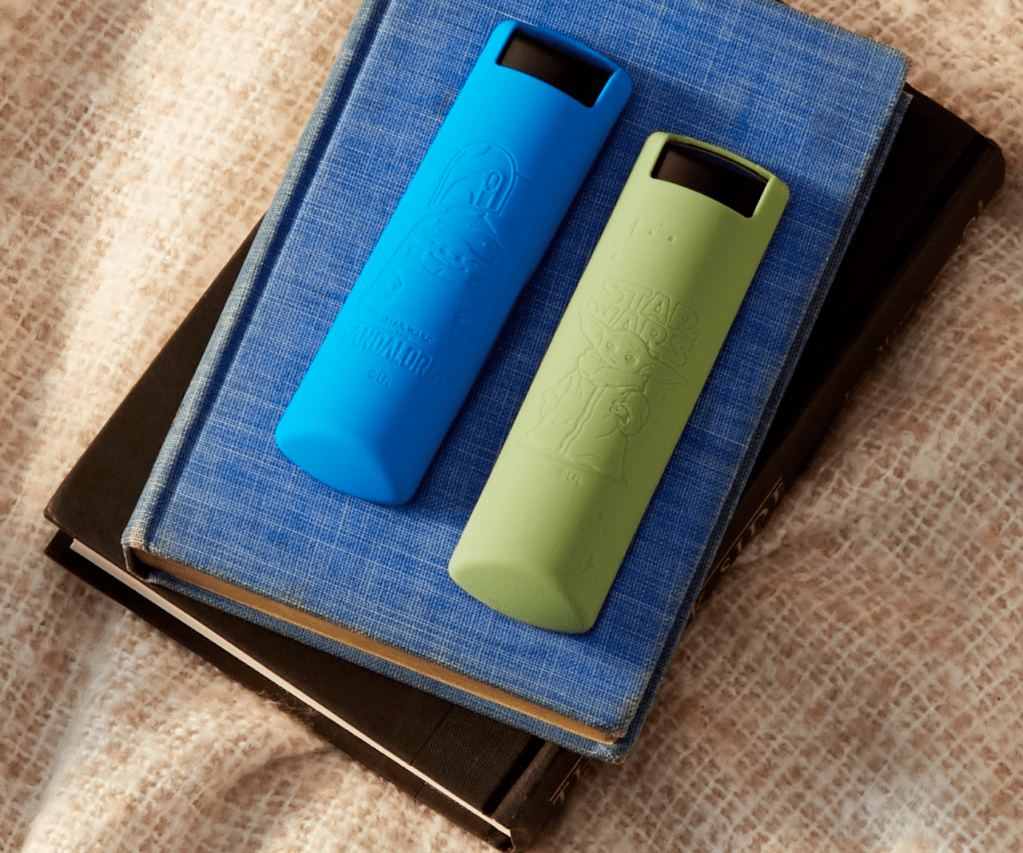 Add some galactic fun to your streaming experience while you catch up on both seasons of The Mandalorian with these themed covers for the Alexa Voice Remote.

The new remote covers feature two designs, including “Bounty Blue” for Din Djarin and “Grogu Green” for the “cutest bounty in the galaxy.” The sturdy silicone cases will protect against accidental drops, and the vibrant colors will help you find your remote, even if you’ve turned off all the lights in your living room for the full movie theater effect.

The new Grogu and The Mandalorian remote covers are only compatible with the Alexa Voice Remote (2nd and 3rd Gen), but there’s an abundance of of officially-licensed Baby Yoda and Mandalorian merch available online if you just can’t get enough.