Antifa, Anti-Fascist, 'Alt-Left': Everything You Need to Know - Rolling Stone
×
×

If you picked your jaw up off the floor just long enough to scratch your head and puzzle at what President Trump meant by the “alt-left” during his now infamous “Remarks on Infrastructure” meltdown on Tuesday, you’re not alone.

So, what about the alt-left? Does it exist, or is it another bullet-dipped-in-pigs-blood fairy tale of Trump’s imagination?

The word no doubt entered the president’s consciousness the same way all his wildest policy ideas, hopes, dreams and paranoid delusions do – from tuning in to Fox.

Though it began as an insult within the left – a way to further deride the far left and so-called “Bernie Bros” during and after November’s election – the right has adopted the phrase, as well. Sean Hannity and other, fringier monsters of the far-right media ecosystem have been, for at least a year now, pushing the idea of the “alt-left” as some sort of answer to the charge that the “alt-right,” a very real political entity, has hijacked and poisoned the Republican party. The Washington Post best described it in 2016 as “The GOP’s response: I know what you are but what am I.”

But there is an actual active and growing group that Trump refers to. However, it’s incorrect to name-check it as the alt-left and it’s downright wrong to morally equivocate it with the neo-Nazi and white supremacist scum that stormed Charlottesville. But it does exist. Only it’s called “antifa,” short for anti-fascist, and it far predates Donald Trump.

First, a bit of history.

Anti-fascism originated in the years leading up to the second World War as a means to fight the spread of fascism across Europe, but in America the progenitors of what Trump would have you call the alt-left can be traced back to 1980s Minnesota. It was during this time that the group “Anti-Racist Action” sprung up around the Twin Cities to combat the rise of local Nazi skinheads. A.R.A., as the group became known, opened chapters across the U.S. and won some major victories against neo-Nazis in the pre-Internet Eighties and Nineties.

Underground, local punk scenes often served as the stage for these groups to do battle, but the scale and frequency with which they clashed was enough to seep into the popular culture throughout the decade. It ultimately culminated with 1998’s American History X, for which Edward Norton was nominated for an Academy Award for his performance as a reformed neo-Nazi skinhead.

These forerunners to what Trump and Hannity call the alt-left were so successful at banishing white supremacists back in to the shadows of society that, without a rallying cause, they dissipated in most places themselves.

“By the mid-2000s it started to peter out,” says Mark Bray, a visiting historian of political radicalism at Dartmouth and author of Antifa: The Anti-Fascist Handbook, which comes out later this month. But now, thanks to white supremacists’ newfound confidence to step out in to public, the old A.R.A.-style groups have made a comeback, rebranded in the age of Trump.

“There’s come another wave of folks who started to use the antifa name instead of Anti-Racist Action, and a lot of those groups started to get going in 2011, 2012 and 2013,” says Bray. It was around this time that white supremacist Richard Spencer coined the term “alt-right.” The rise of that movement served as an accelerant for the nascent antifa groups to expand into what Trump refers to today.

“As someone who pays attention to what goes on with the far left in the U.S., [anti-facism has become] a focal point for politics that was not on the radar back when Occupy Wall Street was going on,” he says. “There were groups, but it wasn’t a focus on the left.” 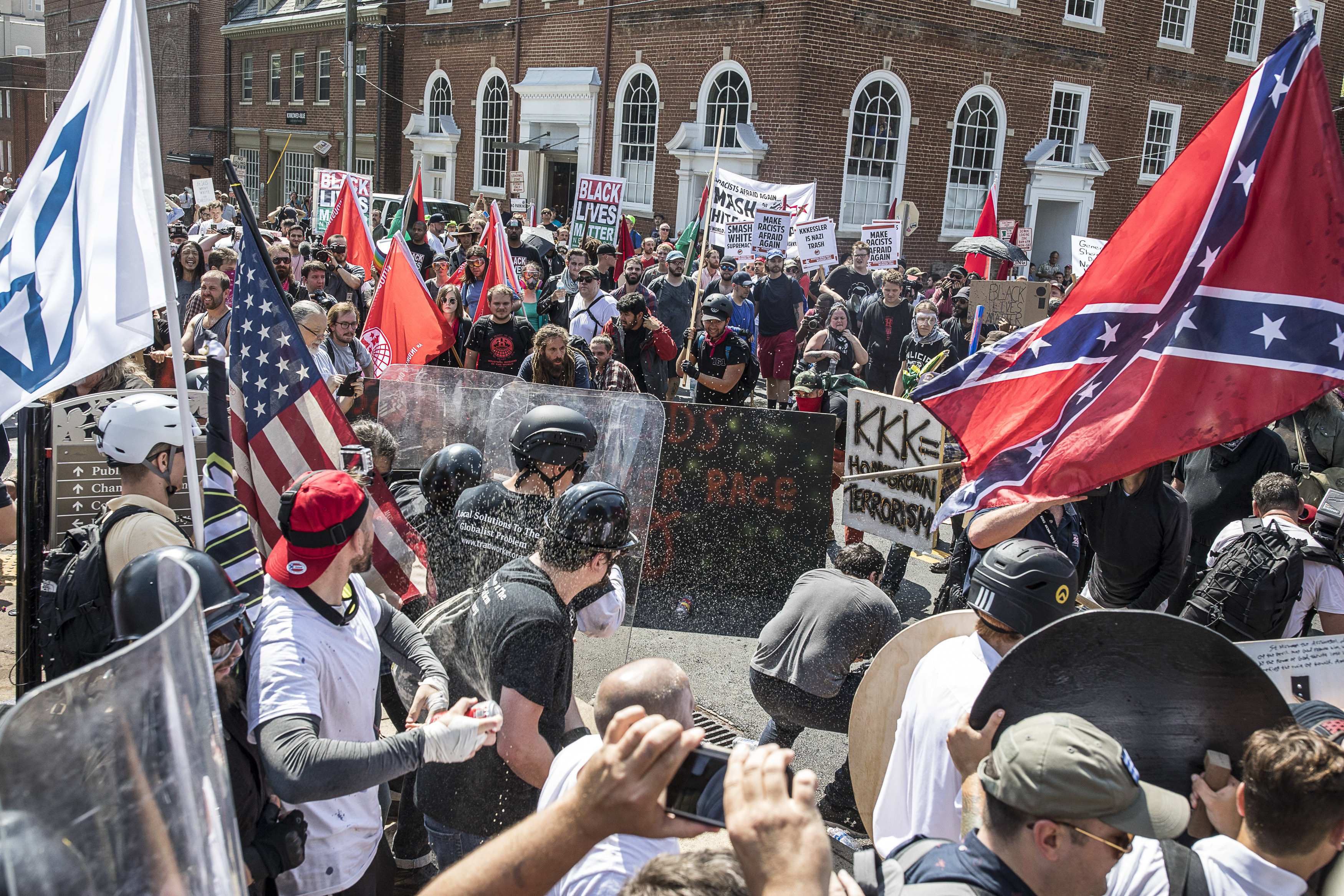 There are hundreds, likely thousands of active anti-fascists (or, “antifas,” as they are called) across the country, although it’s hard to pin down an exact number because their movement is so fragmentary and purposely decentralized. There is no Richard Spencer or Milo Yiannopolous equivalent within their movement and anonymity is perhaps their central tenet. Antifas organize in hyper-local crews of eight to 12, which they call “affinity groups,” as a way to protect against being infiltrated. New York, Atlanta, Portland, Oregon and Philly are known to be particularly active hubs.

This modern incarnation of anti-fascism had become infamous earlier this year – long before Trump’s Tuesday shout-out – primarily for its use of the “black bloc” tactic, wherein multiple “affinity groups,” dressed head-to-toe in black converge upon a public demonstration where white supremacists are known to be. Black blocs exist to cause mayhem and are known to leave a trail of destruction – and sometimes violence – in their wake.

This destructive streak – coupled with disregard for neo-Nazis’ right to free speech – has not endeared these groups to the Democratic party in the way that much of the GOP has welcomed the so-called alt-right.

“They are illiberal,” says Bray. “They don’t believe in society as a value neutral public sphere where any kind of ideas can just float around.”

It’s this philosophy that justifies the chaos they’re capable of causing, perhaps most evidently on display the day of Trump’s inauguration in Washington D.C., when a black bloc materialized to wreck businesses, torch a limo and punch Richard Spencer in the face, giving us the hit heard ’round the Internet. Similar spats have since occurred wherever so-called alt-right figures like Yiannopolous or Spencer try to promote their hate-speech publicly. Berkeley has been one such frequented battleground, but showdowns in places such as Charlottesville and, before that, Pikeville, Kentucky, prove that these groups – on both the left and right – and their radical ideas exist and operate not just in the youthful and idealistic petri-dishes of liberal-arts school campuses, but in towns and cities across the country.

Anti-fascists view the events that transpired in Virginia last week and the president’s subsequent remarks as a watershed moment in the fight against their seemingly ever-ascendant ideological nemesis. “On our side, it’s war,” says one anti-fascist group leader who was present at Charlottesville and has participated in black bloc activity in cities up and down the East Coast since Trump’s election. “Expect greater support from average people. A lot of [normal people] and libs who would have told us to fuck off and stop being so upsetting are now crossing over into our side. We are seeing a new wave of membership coming in.”

Their ranks had already been swelling pre-Charlottesville, too. An anti-fascist who goes by James Anderson – and is the administrator of the website It’s Going Down, which serves as both the chief news outlet and a digital town hall for antifa – told me in an interview last spring that the rise in far right violence seen under Trump “has forced a lot of people on the left to actually look at anti-fascism and take it seriously.”

“This shit is real, it’s touching people’s lives, and there’s a very clear line being drawn by the Trump administration that it’s acceptable, permitted and part of the program,” he said at the time. And that was five months before Trump’s near-endorsement of neo-Nazi riffraff from his bigot pulpit this week.