'A Mortician's Tale': Inside a Death-Positive Video Game - Rolling Stone
×
×

Dying in video games is nothing new. Dealing with the reality of bereavement and dead bodies is. A Mortician’s Tale is a new independent video game (inspired by the best-selling book Smoke Gets in Your Eyes: And Other Lessons from the Crematory by Caitlin Doughty) that helps overcome our modern phobia of dying.

“It’s been a really big challenge for us, showing this accurately and talking about things honestly while also trying to make sure the game is easily digestible,” says Gabby DaRienzo, one of A Mortician’s Tale‘s creators at Laundry Bear Games. She tells Glixel that she worked a lot with the death positive community and funeral industry professionals to make sure the game is accurate but also sensitive.

“We’re very aware that the subject matter is not very comfortable for most people, so we’re trying to show it in a way that people who are not normally comfortable with the subject will be OK playing the game. It’s been a really big challenge,” DaRienzo explains. “Stylistically, the humans are kind of cartoony, they don’t have realistic proportions, the colors are very purple. A lot of that comes from trying to make the subject matter a bit more digestible for people who are not inherently comfortable with it. We disguise a lot of the grosser things by having this kind of monochrome palette. You’re not seeing bodily fluids, blood is not red. It makes it easier for people. It’s the same reason why the people aren’t more humanoid.”

The game involves dealing with the bodies of the deceased, cleaning and embalming them, but also talking to their family members. While the the team has done a lot of research, DaRienzo jokes that her internet search history probably has her on a government watch list, some accuracy had to be sacrificed for practical reasons. 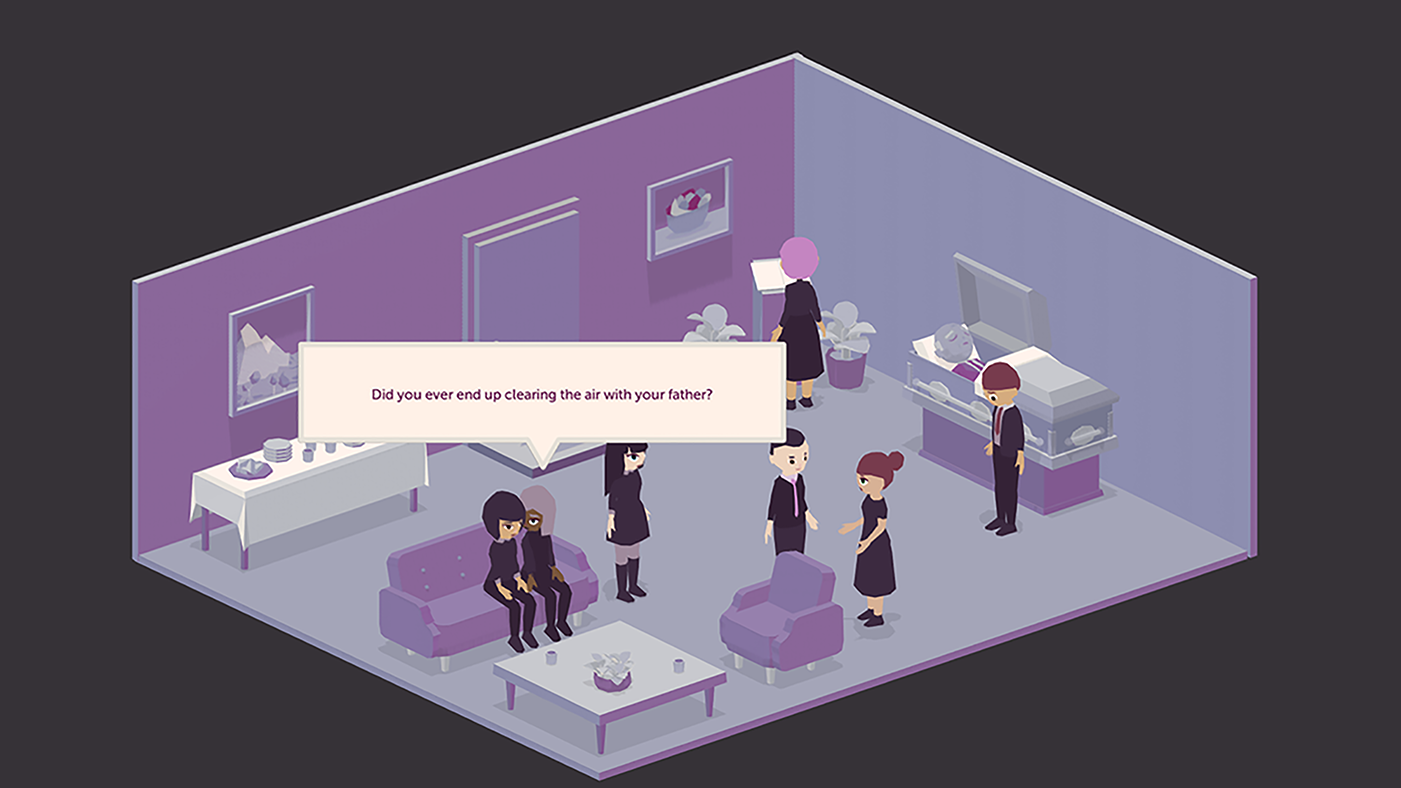 “Something that we specifically took out is that in preparing bodies, whether it’s for open casket or closed casket, embalming or not, when bodies start to decompose, they leak. They start to leak out of orifices, including the genital areas. So a lot of morticians, my friends in the death industry included, would put diapers on people or use cotton balls and just kind of put it in that area just to make sure that nothing leaks,” she says.

“That is a pretty big part of corpse management and we wanted to be as accurate as we can, but this might be the thing that crosses the line. We want to bring this to various game marketplaces and as soon as we do that sort of thing, we can’t, or we automatically get an M-rating, or we can’t bring it to Australia. There are certain things we can’t show. We’re showing a lot of pretty gross stuff, but we’re not showing the grossest.”

The game’s color palette, purples and pinks, and its cartoonish style, also helps stop the subject matter from tipping over into Nineties Internet gore site-type territory.

“A lot of it is because I don’t want it to come across as a horror game,” says DaRienzo.