The majority of memoirs from successful musicians emphasize the famous years – this is why people buy the book, after all – and the period after the singer’s musical relevance has begun to fade, when he/she battles with old bandmates, engages in philanthropic efforts, and maybe gets married a couple more times. Porcelain, the new memoir from Moby, takes a different approach: It cuts off before the release of Play, the 1999 album that sold millions of copies around the world and turned the DJ/producer into a global star.

Instead, the book focuses solely on his rise from playing records at New York City clubs to producing his own singles and headlining popular raves in the wee hours of the morning. Here are 10 key facts we learned from Moby’s days scrapping it out on the mean streets – and dancefloors – of New York City.

Opinion: Why I'm Vegan by Moby

1. Diana Ross was an early inspiration.
As a kid, Moby had one rule when it came to music – “I was indiscriminate.” In reality, he was a very specific kind of discriminate: “If it was played on the radio, I loved it.” But Diana Ross’ “Love Hangover” – a lavish disco track from 1976 that presaged the massively successful direction of Ross’s Diana album several years later – inspired a different kind of devotion. “The opening was languid,” Moby writes, “and it scared me… Ross was promising me that there was a world that wasn’t stained with sadness and resignation. Somewhere there was a world that was sensual and robotic and hypnotic.”

2. In his youth, hygiene didn’t matter much to him.
Before moving to New York City, Moby was based out of an abandoned industrial building near the train station in Stamford, Connecticut. According to the DJ/producer, “In the 19th century it had been a huge lock factory, comprising 20 or 30 grand brick buildings. Now, in 1989, it was a dark and hulking mass.” He estimates that the complex included roughly a million square feet, and he squatted in one small section illegally by paying security guards $50 a month. He constructed walls for his room with wood he found in a Dumpster, cooked on a hot plate and peed in bottles. He didn’t shower unless he happened to pass by his mom’s house or girlfriend’s apartment. Moby remembers this time in glowing terms: “Aside from my longing to live and make music in lower Manhattan, the abandoned factory was perfect.”

3. He never turned down DJing work.
“I wanted to DJ at the biggest clubs on the best nights,” he explains. “I wanted to be a celebrated DJ and musician. But I was also indiscriminate when it came to the work I would actually accept. I didn’t professionally say no to anything until 2002,” at which point Play was a commercial juggernaut. He sums up his stance toward work as: “If a sanitation worker from Queens came to me and asked if I’d be interested in DJ’ing in his living room for him and his grandmother, I probably would have said, ‘Yes, but only if you don’t pay me.'”

4. He once drew the wrath of Run-D.M.C.’s Darryl McDaniels.
Moby DJ’d regularly at a club called Mars, which became a nightlife hot spot and attracted famous guests. One night Darryl McDaniels from Run-D.M.C. started freestyling as Moby played instrumentals. “He lost himself in the flow, getting better and better,” Moby recalls. “Then I played the instrumental from ‘Pause‘ and the crowd exploded.” But as he danced excitedly behind the decks, Moby accidentally hit the turn table. “The record skipped. Not a gentle ‘oops’ hiccup of a skip, but the sort of skip that involved the needle bouncing loudly across the vinyl and ending up on the dead empty zone at the end of the record.” He describes the effect on the crowd in brutal terms: “I had killed Christmas.” 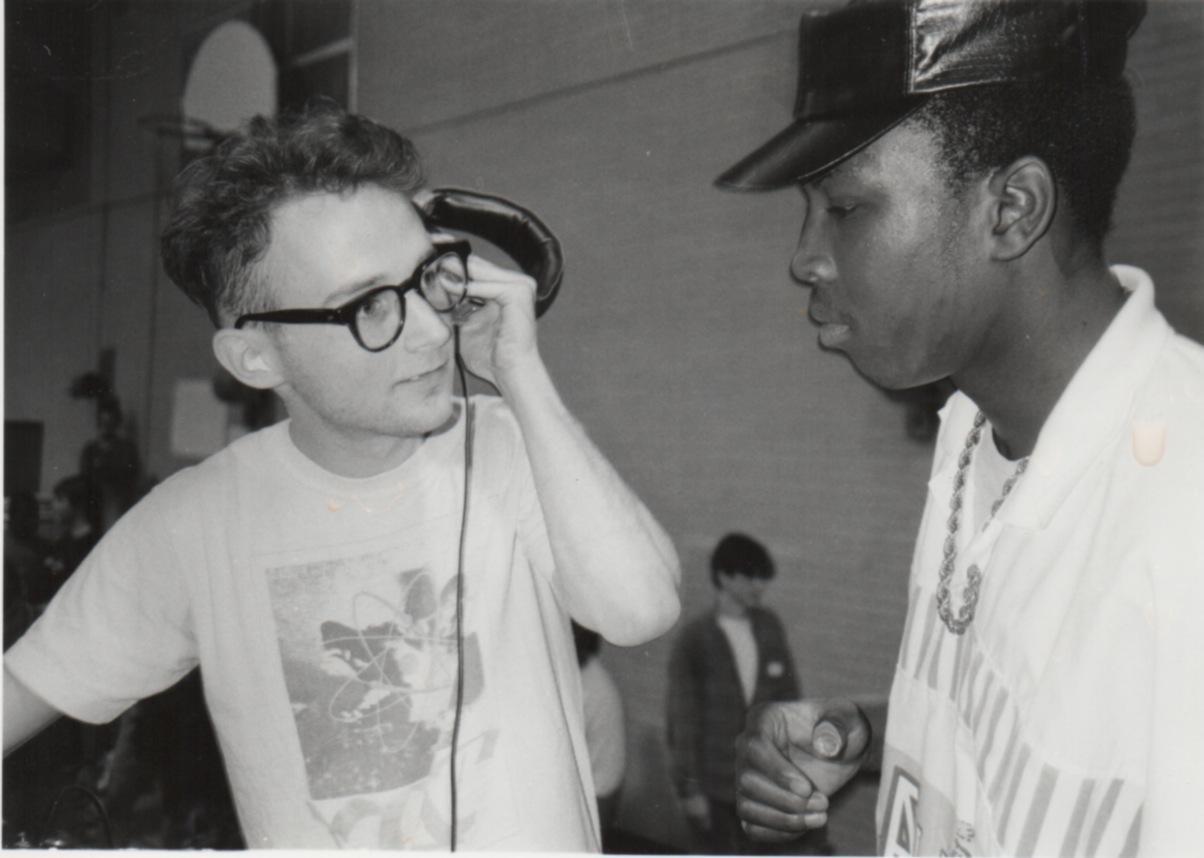 5. Many of the parties Moby attended were wild affairs.
Moby’s book is full of debauchery – Dionysian revels that extend past dawn with help from electronic beats and drugs – which quickly begins to seem indistinguishable. But one event in particular stands out: a rave put on by the DJ Frankie Bones. Moby doesn’t pinpoint the location exactly; he says only that it’s in Brooklyn at “the end of the grey L train line on the map.” At one point in the night, he takes a break from the dancing with two friends and explores the factory in which he’s partying. Moby & Co. discover a parking lot containing trucks and bulldozers, and temporarily commandeer a backhoe for a joyride – when DJs are driving construction equipment, that’s true hedonism.

6. Dance music always moved fast.
Moby first encountered solo success as an artist when “Go” climbed the charts in 1991. It doesn’t take long for the producer to recount his first feeling of being left behind by a rapidly evolving scene. “I felt like the rave equivalent of Comrade Trotsky, a blotted-out figure from an era that had now officially never happened,” he writes after a DJ set fell flat. “Suddenly it all made sense: the monochromatic strobes, the dark and angular music, the drugs. This was their world now. I was politely tolerated, but it was 1993, and I was a sober relic from 1992.”

7. The rapid rise of the scene led quickly to internecine squabbles.
Moby hit the road in 1993 on one of the earliest rave tours. But despite the supposedly positive nature of the jaunt – these artists were fighting to expose their form to a wider audience – things became tense between Aphex Twin and Moby. “I wanted to like Aphex Twin,” Moby notes, “because I loved his records. But he rarely spoke to anyone, and when he gave interviews he criticized me for playing guitar on stage.” The wounds still sting years later: “He called me an elitist in the press, when actually I just had crippling tour-bus-inspired insomnia.”

8. “Feeling So Real” underwent last-minute changes due to a prohibitively priced sample.
“I had written a rave anthem that sounded like a hundred buildings falling down and being built at the same time,” Moby enthuses. “It sounded like a herd of ecstatic elephants.” But there was a hold-up: the owners of a vocal snippet he wanted to use on the track were demanding exorbitant rates for their source material. After searching his record collection for a comparable sample and coming up empty handed, Moby worked with Myim Rose and came up with a new vocal line that didn’t need to be cleared. The result, “Feeling So Real,” became yet another hit for the producer.

9. Axl Rose supported Moby’s decision to release Animal Rights.
Moby turned his back on the sound that made him popular when he released Animal Rights, a guitar-centric album that failed to spawn a hit. The producer admits ruefully, “even before Animal Rights was released, it had failed.” But at least one major rock star appreciated the boldness of the effort: “Earlier that day I’d gotten a voicemail message from Axl Rose, who said that he loved Animal Rights and was listening to the song ‘Alone’ on repeat as he drove around L.A. at 3 a.m.”

10. Moby just wants to make people happy.
A soggy, mud-caked Moby eventually decided to return to the style that first earned him success during a trip to the Glastonbury festival. After announcing his intention to double down on Animal Rights with “a dark and slow heavy metal album,” his manager Barry reminds him that “people really like your electronic music. It makes them happy.” Something about this wording resonates with Moby, who suddenly experiences a big-screen-appropriate epiphany: “My own records should be melodic and emotional, and I should do my best to make music that could give people happiness.” The result of this realization was Play, his commercial high-water mark.