A mecca for gaming developers, journalists, and corporate insiders — the essential trade show for video-game geeks — the Electronic Entertainment Expo (more commonly known as E3) has been the industry’s can’t-miss digital dog-and -pony show since 1995. More than 48,000 people converge on downtown Los Angeles for the event, which boasts a cacophonic maze of company kiosks manned by conspicuously photogenic booth babes to lure in attendees for hands-on demos with state of the art technology.

How Oculus Rift Could Change Entertainment As We Know It

Overwhelming? That’s sort of the point. Though E3 officially runs from June 10–12, the Monday before the festivities was the media’s big day, as companies offered sneak peeks and big announcements for the press corps. Here’s here’s a rundown of the 10 biggest takeaways from the press day of this year’s confab.

Everything Old Is New Again
There’s a lull at the beginning of every new console cycle, so publishers are filling the gap by refreshing and remastering both old-school classics and recent blockbusters for the new platforms. Expect shiny, vividly rendered versions of fan faves like Grand Theft Auto V, The Last of Us, and Grim Fandango — not to mention Halo: The Master Chief Collection, which collects Halos 1-4 along with more than 100 multiplayer maps into one deluxe package.

Music Gaming: Not Dead Yet
Harmonix, the company that made a mint on Guitar Hero and Rock Band before running them into the ground, is still keeping the faith with three music-gaming titles: Dance Central Spotlight, brimming with infectious pop (Pharrell’s “Happy” and Ylvis’ “The Fox”) and tooled for week-to-week updates of the latest hits; Disney: Fantasia, which allows players to conduct the score with hand gestures; and Amplitude, a Kickstarter-funded reboot of the game that actually requires players to play their instruments.

Next-Gen Effects Are Starting To Matter
Xbox One and PlayStation 4 have been crowing about their latest advances, but the evidence has been scant…until now. Developers are beginning to unlock their massive processing power in subtle but meaningful ways. The vast hordes of thronging sans-culottes in the French Revolution-themed Assassin’s Creed Unity weren’t possible on previous hardware, nor the level of granularity in the destruction minutiae and drone-attack swarms of Call of Duty: Advanced Warfare and the rain-drenched day-to-night raceways of Forza Horizon 2.

Kinect Is on the Ropes
Microsoft’s 2013 upgrade to its landmark motion-detecting innovation turned out to be a P.R. debacle, forcing people to shell out an extra $100 for add-on hardware that did little to enhance gaming experience. (They’ve now unbundled it.) Even Sony went for cheap laughs at Microsoft’s expense by referencing its similar — and optional —P laystation Camera (which, to be fair, hasn’t set the world on fire either). Trouble is, if developers can’t count on people having Kinect or Playstation Camera, they will be less inclined to experiment with it and try something new.

D.I.Y. Worlds
The wild success of Minecraft‘s world-building sandbox has sparked a stampede of developers that want to let players build their own virtual environments, including the game-that-lets-you-make-other-games Project Spark and the hotly awaited franchise title Little Big Planet 3. With titles like these, fans are limited only by their imagination. 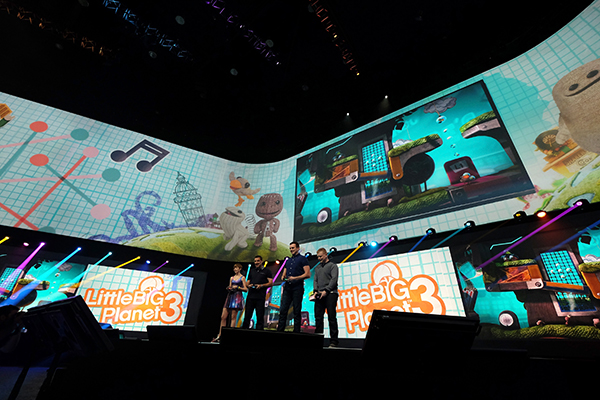 PlayStation Unchained
Who needs a console? Sony’s investment in cloud gaming service Gaikai looks like it will finally pay off with its Playstation Now service, which will allow for players to stream games in real time and without a traditional game machine. The games will play natively on certain Sony TV sets, or through the just-announced Playstation TV, a $99 set top box that will also stream video and music content. More than 1,000 titles from the vast libraries of PlayStation 1, 2, and 3 will be available through PlayStation Now later this year.

Indies Are Becoming Giants
There was no ignoring independent developers at the Microsoft and Sony press conferences. Both companies touted their commitment to dozens of new titles from small teams, among them retro Eighties-homage Broforce, ultraviolent Hotline Miami 2, and the emo-inflected monochromatic adventure Inside; there’s also the eye-popping Entwined (a gorgeous game created by animators plucked from academia) and the procedurally-generated No Man’s Sky, which allows for discovery of planets and species across a near-infinite galaxy.

What We Learned at SXSW Interactive 2014

Zombies, Dragons, Soldiers, and Crooks: Alive and Well
The gaming world’s bread-and-butter workhorses aren’t going away anytime soon, especially with a pipeline full of sequels such as Dead Island 2, Dragon Age: Inquisition, Metal Gear Solid V: The Phantom Pain, and Battlefront: Hardline. Some things — like taking down the undead and hanging out with Solid Snake — are indeed timeless.