If you play the game of thrones, you’re about to join the varsity team. The World of Ice and Fire is the latest book to flesh out the world of George R.R. Martin’s epic fantasy series A Song of Ice & Fire, the basis for HBO’s smash-hit series Game of Thrones. But this one’s not a novel — it’s a fake history book, in which Martin and co-authors Elio M. García, Jr. and Linda Antonsson reveal the millennia-long backstory of the Seven Kingdoms, the Nine Free Cities, and the rest of the known GoT world. From the wildlings and White Walkers up north to the dragons and empires in the far east, the world that Tyrion Lannister, Daenerys Targaryen and the rest of the gang call home is explored in painstaking detail.

We put on our maester’s chain and came up with the top 10 biggest surprises, coolest Easter eggs, and craziest high-fantasy hijinks you can find in its 300-plus lavishly illustrated pages. All men must learn!

1. The Targaryens kind of sucked at ruling the Seven Kingdoms.
Far from the glorious dynasty their PR team would have you believe, the blonde-haired monarchs of House Targaryen did a rather piss-poor job of running Westeros ever since Aegon the Conqueror took the continent by storm some 300 years before the events of the first book, A Game of Thrones, began. Every other king was completely crazy, likely a result of incessant inbreeding among the royals — hence names like Maegor the Cruel, Aegon the Unworthy, and Mad King Aerys. Even some of the most revered monarchs were less than they were cracked up to be: Daeron the Young Dragon conquered Dorne in a flash and lost it just as quickly, while the religious fanatic Baelor the Blessed alternated acts of charity and piety with fundamentalist craziness like imprisoning his beautiful sisters so he wouldn’t be tempted to fuck them. (How many conflicts came down to people wanting to fuck their own siblings without some other person in the way? The answer may surprise you!) Daenerys’ ancestors may have unified the Seven Kingdoms, but it came at a hell of a cost.

2. Tywin Lannister was an even bigger bastard than we thought.
Before he became the not-so-proud patriarch of the dysfunctional Lannister clan, the future Lord Tywin was a fed-up heir trying to clean up his weak father’s messes. As you might expect from the future architect of the Red Wedding, this mostly involved killing a lot of people. The most famous incident involved Tywin’s slaughter of every last man, woman, and child from House Reyne, who’d risen in rebellion against their Lannister overlords. In both the books and the show, Tywin’s revenge was immortalized in the song “The Rains of Castamere”; the HBO series has featured versions by both the National and Sigur Ros, and when the band at the Red Wedding started playing it, that was the tip-off that the shit was about to hit the fan.

But we’d never learned the specifics of the massacre until now, and they’re somehow even more cold-blooded than the song made it sound. Castamere, the Reynes’ castle, was a mostly subterranean stronghold, extending deep underground into the old gold and silver mines through which the house had made its fortune. When Tywin attacked, the Reynes and their followers retreated underground, thinking the complex below was impervious to assault. It was — but it wasn’t waterproof. Tywin had his men redirect a river into the few remaining cracks and crevices. Tywin’s rain had washed the Reynes right out of existence.

3. Casterly Rock is amazing.
Once you’ve learned about Casterly Rock, the ancestral home of House Lannister, it gets easier to understand why Tywin’s such a hard-ass in defending it. The World of Ice & Fire gives us our first serious look at the place yet, and it’s astonishing. Imagine an entire seaside mountain that’s slowly been turned into a giant castle, standing three times the height of the Wall. It’s big enough to have an entire port for visiting trade and cargo ships inside the castle — you just sail right in, between enormous rocky outcroppings that look like a lion’s paws. The whole place is filled with veins of gold, just for good measure.

4. George R.R. Martin likes Sesame Street.
Maybe it’s a coincidence that House Tully was once ruled by Lord Kermit, son of Lord Elmo, son of Lord Grover. (Son of Lord Snuffleupagus?) But we doubt it. The World of Ice & Fire is actually full of little references, puns, name games, and in-jokes of this sort, most of which run to the horror end of the spectrum as opposed to the muppet one. There are creepy-sounding characters named Sauron and Lucifer; there are more tips of the hat to Lovecraft than you can count; and there’s a distant city called Carcosa, ruled by the Yellow Emperor. No mention of Lord Marty of House Hart and Ser Rust of House Cohle, but who knows?

5. A Song of Ice and Fire…and Water?
Even as the fantasy half of the “epic fantasy” that is A Song of Ice and Fire and its TV counterpart slowly picks up steam, the magic these characters have encountered mostly runs hot and cold. Up north, you’ve got the chilling White Walkers and their zombie hordes, the impossibly huge Wall of ice that blocks them, and the psychic wargs, skinchangers, and greenseers who can possess animals or view the future. To the south and east, you’ve got the fire magic and resurrection powers of the Red God, the shadowy blood magic of Melisandre and Mirri Maz Duur (the witch who sacrificed Dany’s baby to zombify Khal Drogo), and, of course, those flying nuclear dinosaurs known as dragons. Magic comes in two flavors: Ice and Fire. 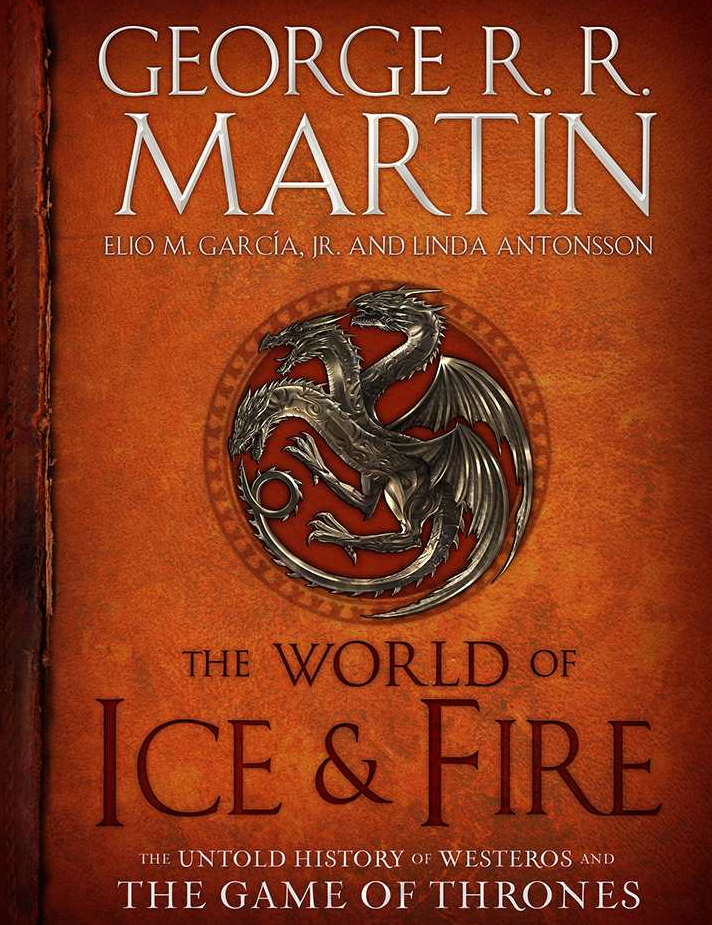 But just as Derek Smalls of Spinal Tap once suggested, when fire and ice meet, you can expect to find water. It turns out that water magic was once just as big a part of the world as the more familiar varieties. The people of the Rhoyne, an ancient river empire whose descendants include the Red Viper of Dorne, worshipped massive river turtles and had water wizards who could drown dragons at will. At least two of the Seven Kingdoms — Robert Baratheon’s homeland the Stormlands and Theon Greyjoy’s intimidating Iron Islands — can boast that water gods factored heavily in their creation myths. And creepiest of all, the book is filled with hints about a prehistoric race of fish-men called the Deep Ones, a term borrowed straight from horror legend H.P. Lovecraft. These creatures waged war against other primeval humanoid species in service of some Cthulhu-esque deep-sea deity. Just when you thought it was safe to go back in the water…

6. There’s a place called the Summer Isles, and it’s pretty much a utopia.
Sail due south of Westeros and you’ll eventually hit a place called the Summer Isles — and if you know what’s good for you, you’ll stay there. A demographic/geographic mash-up of Africa and the Caribbean, it’s by far the safest place to live in the entire Ice & Fire world. The Summer Islanders build the world’s best ships and the deadliest archers around, which came in handy when two warrior queens needed to destroy the slave trade. But they never war amongst themselves: Conflicts are settled in melees between rival armies that are more like a huge group MMA fight than an actual battle. They consider sex to be a literal art form, like music or sculpture, and every Summer Islander spends at least one year serving in temples for the god and goddess of love, learning how to make love as a form of worship. Beats the hell out of King’s Landing, that’s for sure.

7. There’s a place called Sothyros, and it’s fucking terrifying.
Far to the southeast of Westeros, where the bulk of the series takes place, lies a massive jungle continent called Sothyros — and it’s basically hell on earth. A sampling of its rare infectious diseases include “blood boils, green fever, sweetrot, bronze pate, the Red Death, greyscale, brownleg, wormbone, sailor’s bane, pus-eye, and yellowgum,” all of which make ebola sound like a bad case of seasonal allergies. Its native population are known as “Brindled Men” for the animal-like patterns on their skin. Worms and wasps lay eggs inside people’s skin. Schools of carnivorous fish eat anyone unlucky enough to fall into the Sothoryi rivers. We won’t even get into the 50-foot snakes, albino vampire bats, giant spiders, and the Wyverns, which are basically those things the Ringwraiths flew around on in The Lord of the Rings. If you somehow got stranded on Sothyros, even hanging with the White Walkers would start to look good.

8. The farther out you go, the more far out things get.
Everything in The World of Ice & Fire is written from the perspective of a maester, one of the scholar-teacher-healer-advisors in gray robes and ceremonial chains found in the service of every noble House in Westeros. And they’re the first to tell you that the details about the lands farthest away from Westeros are sketchy at best. But man, what a sketch! Far to the east, the warrior women of Hyrkoon make up the finest fighting force on the planet; only the choicest male specimens are permitted to breed. Farther still stands the sprawling empire of Yi Ti, an Imperial China analog whose wealth, size, and armies make it the greatest civilization in history. And at the ass-end of everything stands Asshai, which is a distant cousin to Tolkien’s Mordor, where the sorcerers and death cults of a thousand lands converge to be creepy and mysterious. There’s no telling if these stories are true, but the old newsroom adage applies in the maesters’ Citadel as well: Some stories are too good to check.

9. There might be more dragons out there than Dany’s terrible trio.
Most dragons had been dead for centuries, destroyed in the massive volcanic eruptions that ended the Valyrian Empire — until Daenerys brought them back from extinction with fire and blood. But there sure are some tantalizing hints to the contrary in this tome.  The section on the Iron Islands makes note of sea dragons, massive undersea beasts capable of eating “leviathans” (whales) and “krakens” (giant squid); the bones of one such creature mark the spot where the Ironborn lords gather to choose their kings. Another section on the Shivering Sea takes reports of ice dragons, who breathe out paralyzing cold instead of scorching fire, pretty seriously. There’s a throwaway mention of dragons lurking in the cliffs surrounding Asshai, matching a vision Bran had in the first book. And there are a pair of doth-protest-too-much dismissals of legends about dragons or dragon eggs deep beneath Winterfell. The world’s suddenly starting to look a lot more dragony.

10. Nobody really knows anything.
War is horrifying. Good guys do awful things; bad guys do noble things. Almost no one’s fighting the real enemy. Whether you’re talking about the novels or the TV series, one of the most rewarding things about the world of Westeros and its environs is how thoroughly it examines, challenges, subverts, and enriches the conventions of the fantasy genre. The World of Ice & Fire is no different: Far from an authoritative, objective sourcebook giving you just the facts about this fictional world, this book portrays its internal history as a fluid, fractured thing. How old is the world? How long ago did its civilizations start? Did its most famous heroes ever actually exist? The World of Ice & Fire rarely, if ever, claims to know for sure. It’s designed to start conversations, not settle them — frustrating for a maester, perhaps, but exactly what good fiction ought to do.