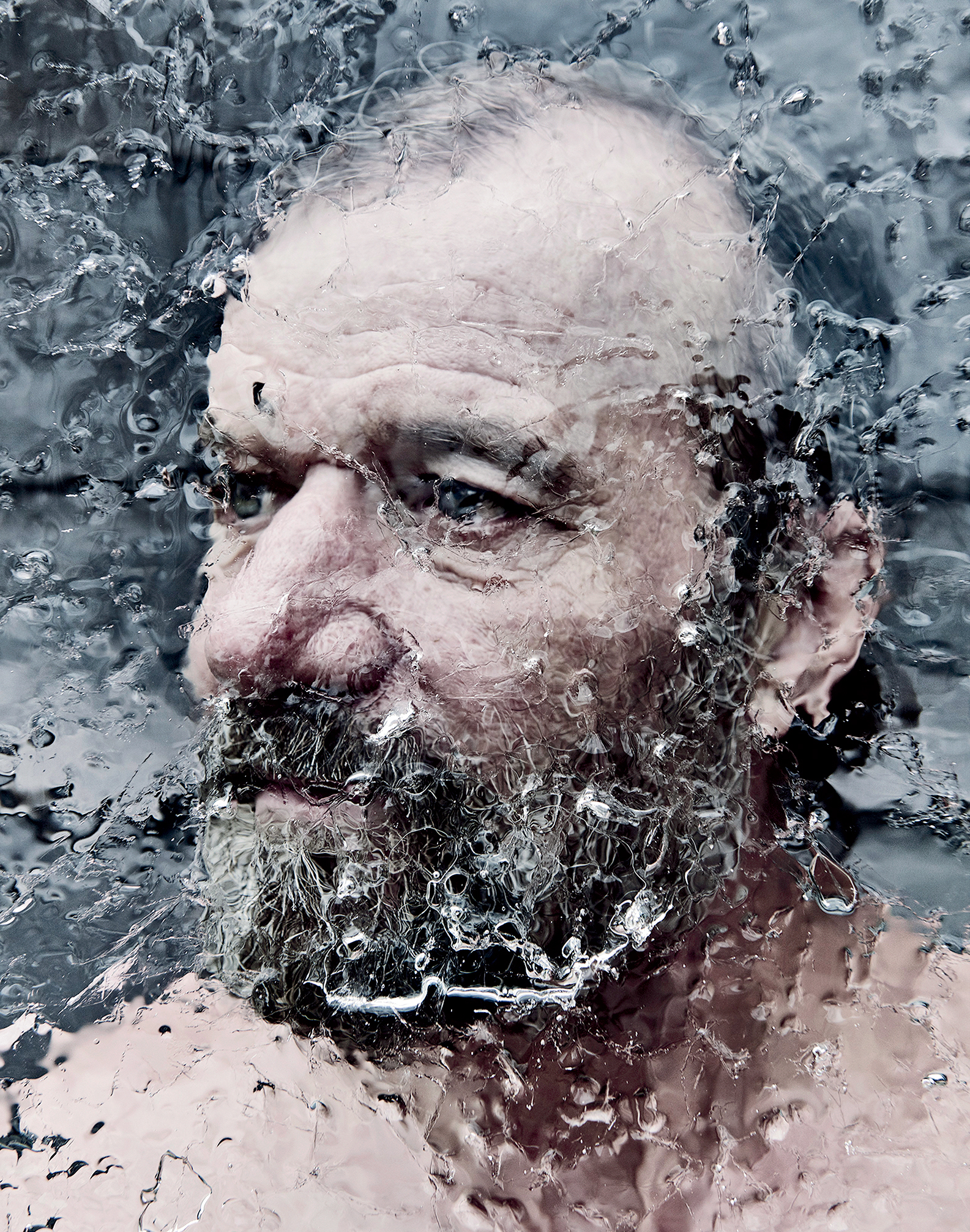 Wim Hof’s position on big-big-name celebrities like Jim Carrey, Harrison Ford and Tom Cruise is that they are going to help take him and his far-out, revolutionary, health-restoring way of deep breathing, known as the Wim Hof Method (WHM), to the next level. The level it’s at now is disappointing. Here he is, claiming to hold the secret to curing MS, arthritis, diabetes, fear, depression, anxiety, pain, PTSD, bipolar disorder, cancer, you name it, and nobody seems to care. It doesn’t matter to him that over the past few years he’s become some kind of global cultural phenomenon, making media appearances all over (Discovery Channel, ABC, NBC, National Geographic Channel) to provide the lowdown on not only his breathing technique but also his nearly superhuman ability to withstand cold, which is another part of his method and always a crowdpleaser. In all, he has claimed 26 world records for his various feats, including the Guinness World Record for longest ice bath (1 hour, 52 minutes and 42 seconds), enabling him to rightfully be called “the Iceman.” But that’s not enough for him. He wants more. He wants to change the world.

Today, Hof has plopped himself into a chair next to a gleaming Airbnb-rented Airstream trailer set high above a coastal California canyon. He’s come to the States to participate in a Michigan-based medical study and to try to find donors to help support his cause. As usual, he’s shirtless, scraggly-bearded and happy to expose what for a 58-year-old man is an impressive array of muscles. He speaks loudly, rolling his R’s in grand fashion, as only a Dutchman can, and, when talking about the WHM, his eyes turn almost feverish.

“We’re on the brink of change of awareness and consciousness!” he says. “Every person will be happy, strong and healthy! We’re awakening people! Then peace will come on this Earth! These famous actors, they’re gonna go up Mount Kilimanjaro in shorts! After that, the world will know!”

At about the same time, the owner of the Airstream trailer, a string-beanish fellow, rounds the corner, takes a seat, and just like that, Hof has him taking deep breaths to demonstrate the cornerstone of the WHM. He tells his new pupil to forcefully suck in a big lungful of oxygen (“Fully in!”), then exhale normally (“Let it go!”), in a modified form of hyperventilation. He has him take 40 of these breaths, during which blood-cell oxygen levels rise to the maximum amount possible. When the last breath is absorbed, Hof says, “OK, now let it go, and stop. Don’t take another breath. There is no need for breathing.”

And then the seconds begin to tick by, with the guy holding his breath. According to Hof’s theory, certain changes are now occurring inside the body. For one, blood-cell oxygen levels are plummeting, from 100 percent to under 80 percent, triggering a fight-or-flight response that sends stress-hormone levels rocketing, in turn suppressing inflammation and, over time, leading to all kinds of health benefits.

Caught up in the moment, Hof allows a few departures from the science behind his method, barking stuff like, “We are changing the chemistry! You’re becoming alkaline! Carbon dioxide is not working! Your body is supremely present! We are going past the lymphatic nodes! Adrenaline is shooting out of your body, resetting your body! Yes, yes, go with your mind!”

It all sounds kind of nutty, of course, but in a 2012 study, Hof’s theory was put to the test by university researchers in the Netherlands, who examined samples of his blood and found that, as Hof claimed, he could indeed manipulate his immune system at will and, in so doing, fight and win battles against diseases of all kinds. Not only that, but in a 2014 study, researchers injected 12 other WHM subjects with a toxin that normally causes flulike nausea and fever. It hardly fazed the deep breathers – or at least not as much as it could have.

One minute after he started to hold his breath, the Airstream owner is looking a little peaked. Thirty seconds after that, he sucks in a bunch of air and, as instructed by Hof, bears down on the newly held breath, trying to press it into his brain. At that point, oxygen is flooding the body and carbon dioxide is being expelled from the bloodstream. “Squeeze it like you’ve got a big shit to get out of you!” Hof says. “One that doesn’t want to get out! Squeeze, yeah! Nice!” He pauses. “OK, how do you feel?”

And Hof beams. He looks deeply gratified. Another convert. But that’s just one man, and just one man is not enough to change the course of modern medical history.

It all started one winter day in Amsterdam, when Hof was 17. The son of working-class parents with an abiding interest in yoga, karate and Hinduism, he was walking beside a half-frozen Beatrixpark canal when a powerful urge overcame him, and he stripped down. A moment later, he was in the water. Even today, he has a difficult time explaining the impulse. “I felt this attraction to the cold water,” he says. “And then, after I went in, I felt this understanding, an inside connection. It gave me a rush. My mind was free of gibberish.” It was so good, in fact, that he returned the next day to take the plunge again, and he continued throughout that winter and beyond, along the way evolving his breathing technique, which is based on the centuries-old Tibetan Buddhist practice known as Tummo meditation, but features none of its spiritual trappings.

For the next 15 years, Hof continued his daily routine, basically keeping it to himself, while working various odd jobs. His wife, however, had begun to show signs of schizophrenia, and one day in 1995, after kissing her four children goodbye, she jumped off the eighth floor of an apartment building. A bit later, Hof had a vision in which he saw how his breathing technique could help people like his wife. “I can bring people back to tranquility,” he once said. “My method can give them back control.” He started trying to popularize his techniques, but had little success until a TV news crew came to film him jumping into holes cut in a nearby frozen lake – and also happened to film him saving a guy who had accidentally fallen through the ice and was just moments away from death. In the aftermath, he became known throughout Holland as the Iceman.

Then came one extreme stunt after another and those Guinness World Records. In 2007, he ran the world’s fastest halfmarathon while barefoot on ice or snow (2 hours, 16 minutes and 34 seconds). That same year, he attempted to scale Mount Everest wearing nothing but shorts and shoes, but was thwarted by a foot injury. He tackled Mount Kilimanjaro next, again wearing only shorts and shoes, and reached the top in less than two days – an unheardof feat. All the while, he took to the ice, breaking his own fully submerged-but-forhis-head record four times. By 2015, he was making the rounds in the U.S., plumping for his method and trying to understand how it is that the 2014 study, which proved that he and his students (and, hence, the rest of the world) could control their immune systems, had not upended the medical establishment.

“You know what?” he grumbles. “The whole medical industry wants us sick.” He scowls. “When that study came out, the world should have gone the other way. But now you see the reality of the world. Yeah, man, we’re getting it in the ass all the time. The mind has been sodomized and bastardized.”

He’s getting worked up now and flapping his arms around. “There is absolutely no speculation with this. We’re able to get into the DNA in the deepest part of the brainstem and fight off inflammation, pain, anxiety, fear, PTSD, trauma and depression. Hangovers – 20 minutes of breathing, gone!”

His master plan involves meeting with all those celebrities and getting them to bang around the world singing the praises of the WHM. Toward that end, he’s going to sign them up to climb Mount Kilimanjaro with him, wearing shorts and scaling the summit in a day or less – the whole project overseen by a team of researchers and filmed by a crew from Netflix. “We’re gonna show the world what the human body is capable of,” he says. “And the celebrities are gonna use their influence to help bring this out to the world.”

A couple of days later, Hof leads a WHM seminar in a discreet little gym in Santa Monica. Inside, a bunch of wide-eyed buff dudes gather around Hof as he runs through his spiel. “Four years ago,” he says, “we showed how the autonomous nervous system is no longer autonomous! And there have been all kinds of miraculous healings! So forget when you get sick! Just breathe and get the motherfucking bacteria out!”

Just then, the first celebrity shows up. It’s Carrey, looking trim and gung-ho. Hof takes one glance at him and shouts, “I love you, man! I bow to you, man! We will heal the world! We will change the paradigm!”

Hof nods and turns around. Maybe he’s looking for Ford or Cruise, but it soon becomes clear that Carrey is going to be it. No matter. Hof leads everybody through the WHM breathing paces and some ice bathing. It all goes well, but afterward Hof looks agitated. What he needs to do is get Carrey signed on to his world-upending effort.

“We are pioneers!” he begins. “We are gladiators! This is the absolute way, scientifically endorsed to go in the depth of the DNA, the brainstem and even deeper! No doubt! No speculation! We climb Kilimanjaro! A Netflix documentary! You back me up, I back you up. Like family.” He glances at Carrey, full of hope, certainty and belief. “Help me, man,” he says beseechingly. “Help me help the world.”

Carrey is nodding. He’s still smiling, but it’s beginning to look a little plastered on. “I want to,” he says. “But I want to find out what this documentary is all about.”

“You know,” Carrey adds, “I have to understand what it is.”

Hof blinks again. What’s left to understand? Hasn’t he just laid it all out, everything: the WHM, the ice baths, the possibilities for the future? What else do you need to know? Hof can see the future slipping away from him.

Carrey, in a voice that barely breaks the surface, says, “If I did get involved in this thing, could I be referred to as No One? In the whole production? And be billed that way, like I want No One to do this?”

Hof can see the future slipping further away from him. A moment ago, it was just within reach. Now, it’s fading.

But does Wim Hof look crestfallen? He does not. He’s the Iceman, and sooner or later, with Jim Carrey or No One, he will change the world.