At times, Virginia Beach sounds like a cappuccino machine as it foams milk – with the racket turned up to the volume of thunder and blasted down every street in the city. You can hear it from the northern border of North Carolina all the way out to the other side of Chesapeake Bay. It’s a sound that I recall with fuzzy nostalgia: I lived in Virginia Beach as a kid. Noise from fighter jets was normal and unexceptional as spring showers or Richard Simmons. (This was the Eighties, mind you.)

I lived in Virginia Beach for the same reason most people do: The U.S. Navy brought me there. My dad served for six years before I was born, and then spent another 12 working for a company contracted by the military. But my family moved away when I was ten years old, and I hadn’t been back for more than two decades. A few weeks ago, that changed: I visited the city with a plan to make sense of my noisy childhood memories.

Flashback: Lindsay Weir Becomes a Deadhead on 'Freaks and Geeks'

As I rode through town, this time as a visitor, I noticed the military murals and serious men with cropped haircuts traveling in groups. Looking back, I remembered that my friends’ dads would disappear for months at a time. As I imagined it, they were sailing the seven seas, doing heroic deeds and singing songs as they polished their medals and toiled under the hot sun. And, like my dad, they might soon join the ranks of the city’s veterans. Today there are more than 60,000 living in Virginia Beach. That’s a big number: Other similarly sized cities – Atlanta, Long Beach, Raleigh – have roughly a third that many former military members.

But my romantic childhood notions about military life were misguided, and I learned this by visiting the source of that cacophony, Naval Air Station Oceana. The 74-year-old base handles more than 60,000 takeoffs and landings a year. Add in the other bases in Virginia Beach – Dam Neck, Little Creek, and Fort Story – and you have the city’s biggest employer by far. Oceana alone requires the help of nearly 15,000 military personnel and 2,000 civilians.

On the day of my arrival, the public affairs office is working with the city on damage control following a massive oil spill. Two days earlier, 94,000 gallons of jet fuel had leaked from one of Oceana’s tanks and spread to nearby waterways. But that hasn’t slowed down the day-to-day operations: Fighter jets are taking off and landing every few minutes, while on the other side of base, dogs in training are attacking men in protective marshmallow-men suits. Meanwhile, in the commons, a young petty officer stands before his peers, pledging another four years of service, while Oceana administrators prepare for a hurricane drill at ten-hundred hours. 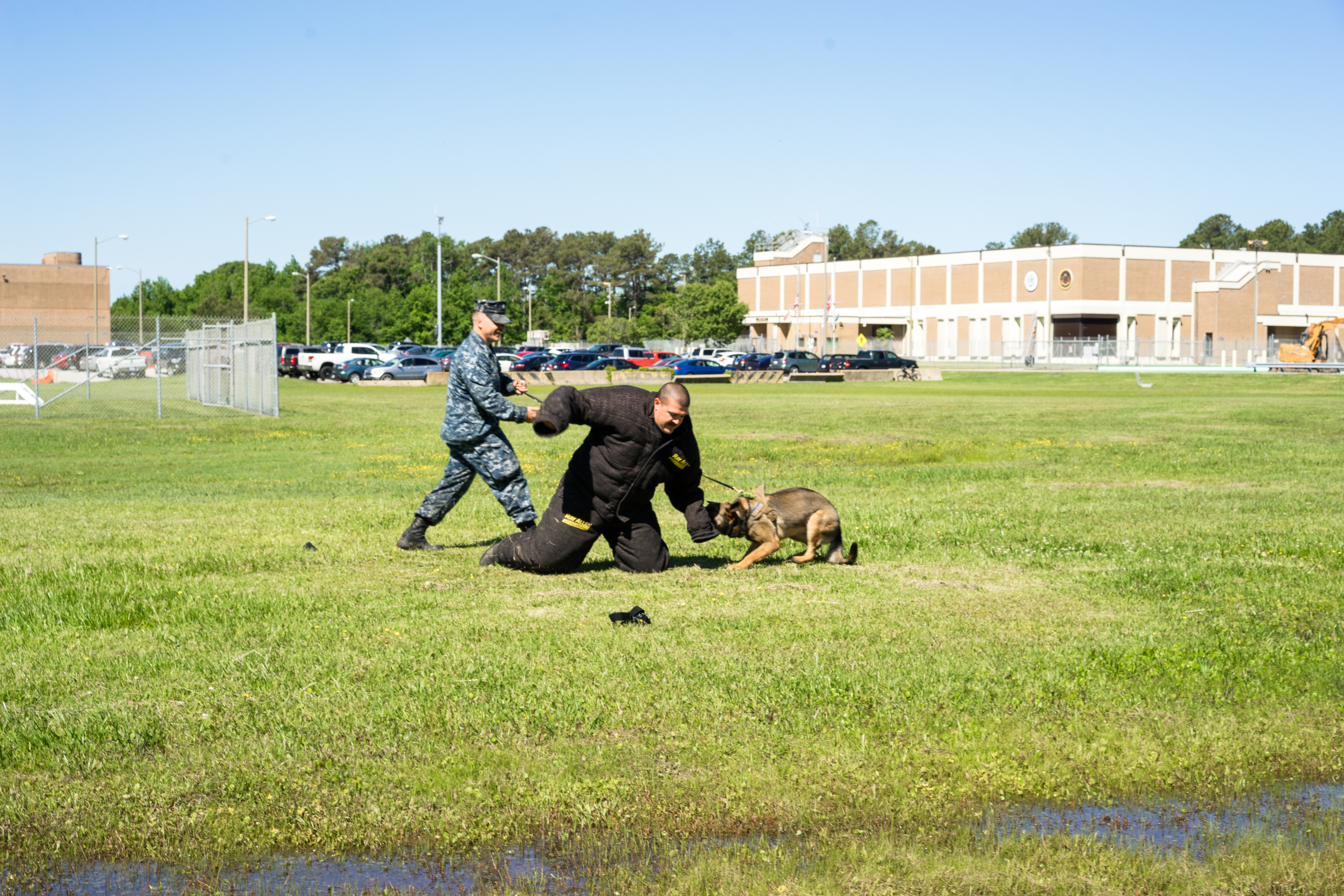 It’s within this bustle of activity that I meet commanding officer Rich Meadows, who runs the base. The fast pace of military life is intentional, he says. “When you’re not busy, your mind wanders,” he says. “So we stay extremely busy here at Oceana.”

After watching jets take off for a couple hours from the air-traffic control center, I turn to my chaperone: Can I fly in one those? I cannot. I do the next best thing and drive 12 miles south to the Military Aviation Museum, which harbors the world’s largest private collection of antique planes. The majority of them apparently still fly, and I aim to take a ride.

At the museum, I find Hellcats and Corsairs and German fighter planes with swastikas painted on the wings. “Some of these airplanes were shot down by the enemy, and some were shot down by Americans,” says Jerry Yagen, the museum’s founder. “Even in the woods around here, I could show you crashed planes that still haven’t been recovered.”

The Military Aviation Museum is largely run by a group of about 200 volunteers, many of them veterans, who give tours, maintain and restore planes, and generally share their passion for military history.

After touring the hangers, I climb into the open cockpit of a WWII Boeing Stearman. The wings are little more than wooden ribs covered with fabric, paint, and glue. “It was designed for student torture,” jokes the pilot.

Even though it’s fully restored and freshly painted, the old plane seems rickety to me. I ask Yagen if today’s military jets are any safer. “I don’t know,” he says. “They’re still dangerous. You can only die once.”

That reply makes me wonder what it would feel like to smash into the ground at several hundred miles per hour. For a moment, I consider skipping the flight. But that would be crazy. 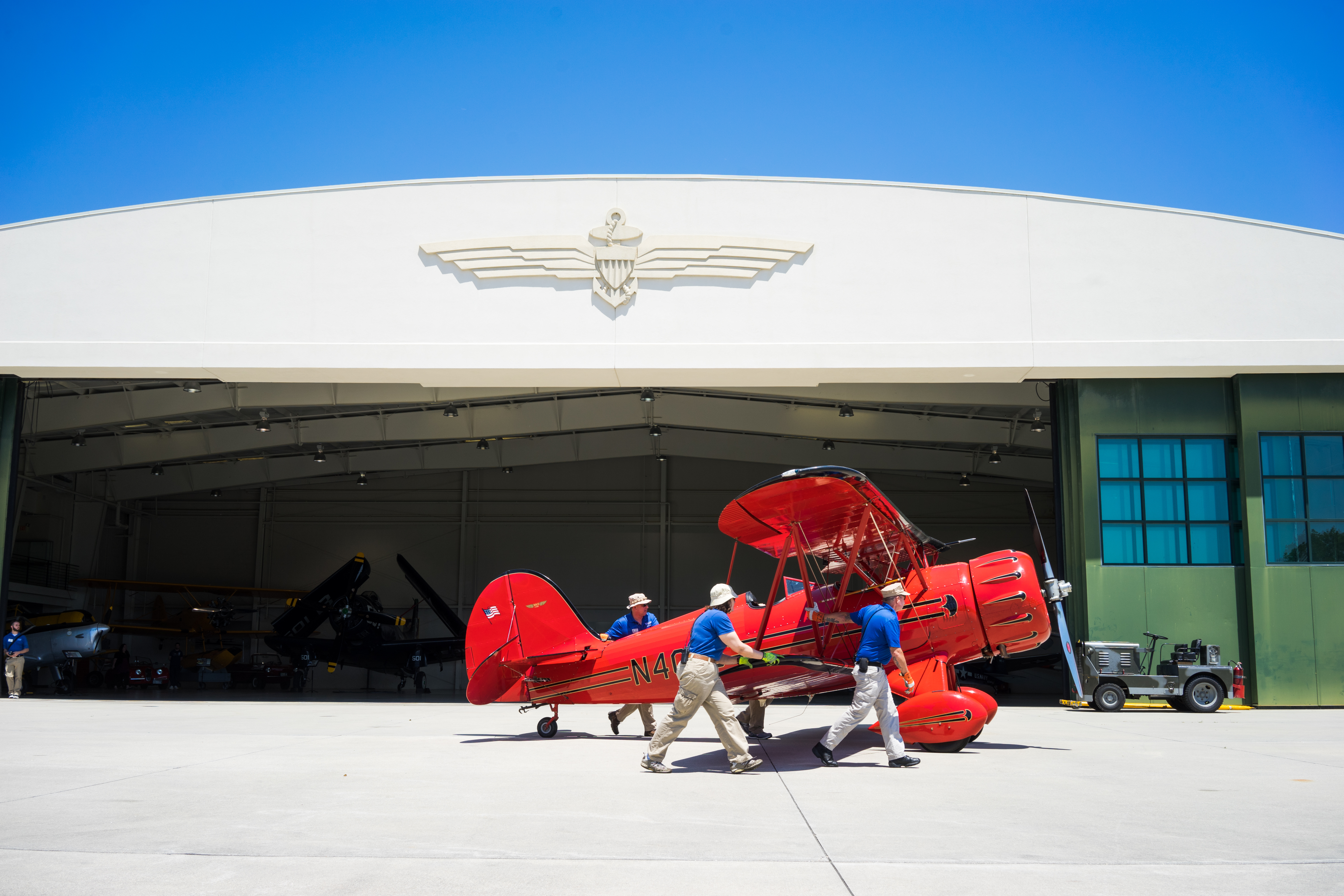 I climb into the Stearman, and we bounce down the grass runway, building speed until we’re airborne. Seconds later, I understand what it means to fly by the seat of your pants. The term stems from the old navigation strategy of using your ass to feel changes in course. It was the only reliable way to fly during the days when planes rattled around like airborne T-Model Fords with no ground communication. And as we whiffle and lurch through the air, I feel every adjustment in real time.

My Stearman flight doesn’t provide the sort of stomach-churning G-force I imagine I’d experience in one of Oceana’s F18 Hornet jets, but it’s one hell of a good time. And when we land, I jump out with a new appreciation for the feeling of earth beneath my feet. A half-dozen volunteers laugh as I struggle to pull my wingsuit off over my boots, but I’m grateful to amuse them. They seem like a close bunch, and it occurs to me that they’ve probably spent the bulk of their lives working on flight decks and runways. These are the guys I should thank and blame for the jets that fly overhead.

As I leave the museum, I hear a jet fly overhead. And I smile as I notice that it’s bound for Oceana.