On a frigid Saturday afternoon, the best-smelling place in America was Ellipse Park in Washington, D.C., where it was impossible to go one step in either direction without walking into a fragrant cloud of sweet-smelling vapor — though marketed to mimic everything from strawberries to cotton candy, it all came out smelling the same.

Hundreds of members of the vaping community gathered to protest an impending vape flavors ban announced by President Donald Trump, taking hits off their elaborate hardware while clutching signs reading “Make America vape again,” or “Vape kills like Epstein killed himself.” The crowd frequently broke into chants of the catchphrase of the afternoon: “We vape, we vote.”

“Keep it going! Make him hear it!,” James Jarvis of the Ohio Vapor Trade Association urged from onstage, referring to President Trump in the White House directly behind the protesters. (Trump had already left via helicopter for an Alabama football game, delaying the rally by an hour and forcing the grumbling, puffing hordes onto the sidewalk.)

The e-cigarette industry has taken a hit in recent months due to a mysterious, lung-related ailment sweeping the country that the Centers for Disease Control (CDC) has linked to vaping. To date, more than 2,000 have fallen ill and 40 people have died from e-cigarette or vaping-related lung injury, or EVALI. Compared to the nearly half a million people who die every year from smoking-related illnesses, it is not a large number. But for a product that was supposed to be a harmless alternative, the health crisis is nonetheless alarming.

In response to the epidemic, as well as rapidly rising rates of teenagers using e-cigarettes, President Trump announced in September that the FDA planned to implement a federal ban on all flavors except for mint and menthol. On Friday, he revealed more details about the legislation, telling reporters that the FDA planned to raise the vaping age to “21 or so” and promising to unveil it next week.

For those in the vaping community, the ban “took everybody by shock, by storm. It’s almost like a bad dream,”  says Darin Tripoli, owner of three Sunshine Vape stores in Rhode Island, which is one of a number of states to have passed some version of a flavored e-cigarette ban. He says his sales have gone down by approximately 90% since the legislation was announced in September.

The vast majority of people at the rally were vaping shop owners and industry advocates whose businesses had been significantly impacted by the events of the past few months. (In advance of the rally, Matt Culley, a YouTuber whose vape review channel Matt From SMM has 288,000 subscribers, had estimated that only about 10% of attendees would be directly linked to the vaping industry, but this did not appear to be the case.) All of the vaping business owners said that their sales had been virtually decimated by the past three months of negative media coverage, even if they did not operate in states that had passed flavor bans.

“People are scared,” says Randall Smith, the owner of Vapor Chasers in Virginia Beach, Virginia. Smith estimates his business has experienced a 30% decline in sales. “[They] were pouring in, asking, ‘What am I gonna do, will I have to go back to cigarettes?” 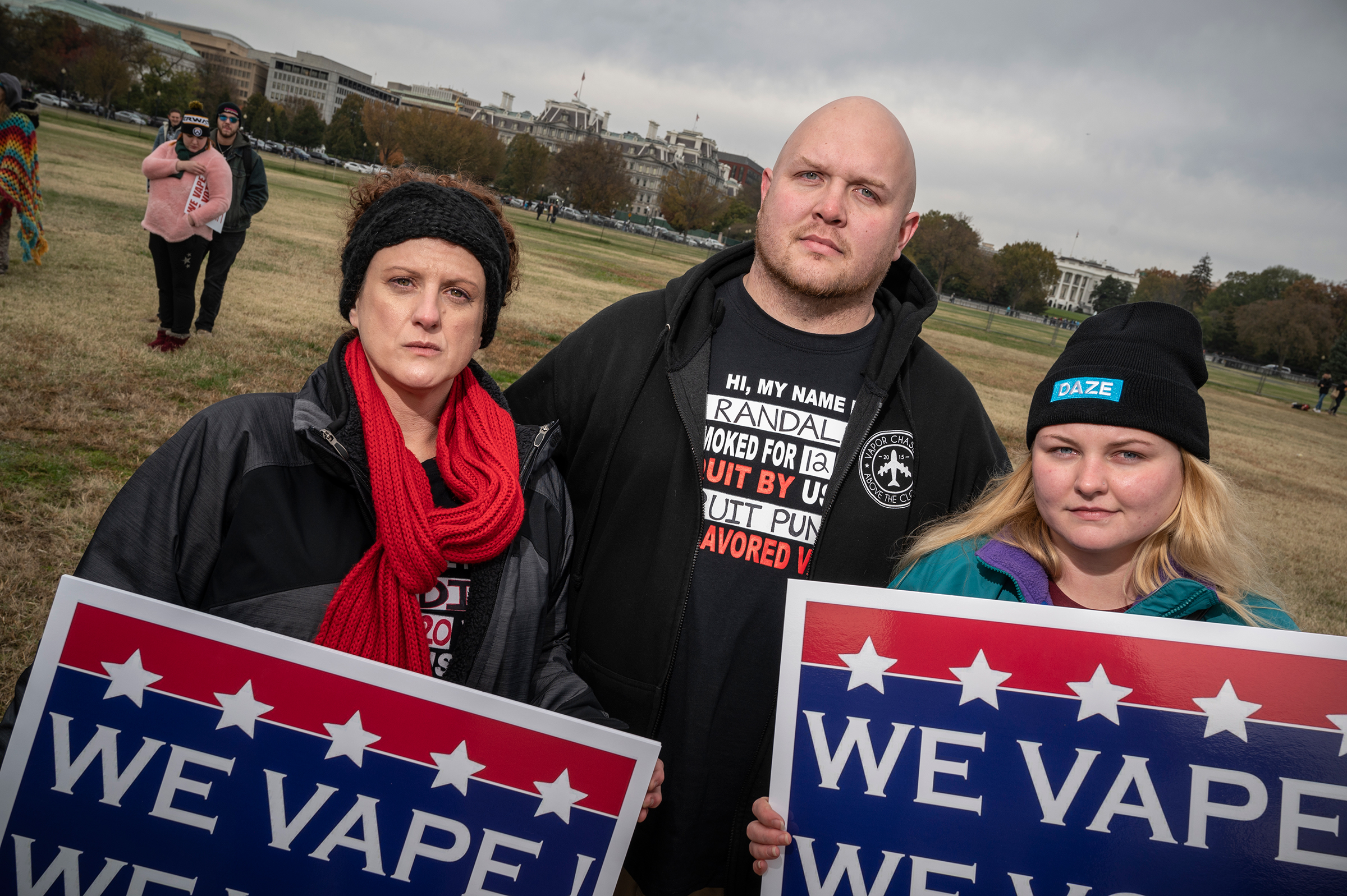 Heidi Kazle, Randall Smith, and Jessica Yerigan join vaping activists near the National Mall to urge legislators to maintain legality for these products. Photograph by David Butow for Rolling Stone

Many at the rally balked at the suggestion that flavors like mango, mint, and cucumber leads to teenagers and kids vaping, which is often cited as the justification for banning flavors. The FDA has accused the e-cigarette company JUUL in particular of marketing to teens by launching aggressive ad campaigns on Instagram, prompting JUUL to shut down all of its advertising and discontinuing sales of many of its flavored pods.

Members of the vaping community argued that young people are vaping not because of fruit flavors, but because of the extremely high nicotine content of JUUL pods. “Kids are going to vape cat piss, OK? At 50 mg, it doesn’t matter. They do not care about flavors. They care about getting high, the end,” says Ashley Knight, 32, who manages a vape shop in Fort Wayne Indiana. “People need to parent their children and not have to worry about the government doing it for them. The end.”

Many of the attendees expressed their outrage toward the announcement of Trump’s ban, which they interpreted as a fundamental misunderstanding of what they believed was driving the vaping epidemic: vitamin E acetate, an additive in many black-market THC cartridges. On Friday, CDC deputy director Dr. Anne Schuchat reported that vitamin E acetate had been identified as a “very strong culprit” in the lung injury epidemic, and that 86% of lung injury patients had reported vaping THC cartridges.

“They’re trying to conflate these issues and it’s really frustrating for people that have quit smoking [and started vaping] to suddenly be criminals because the CDC was wrong,” says Nick Grimm, a.k.a. GrimmGreen, an immensely popular vaping YouTuber who had helped to promote the rally. “[No] one has come out and said don’t get stoned, don’t go to a dispensary. They are only going after liquid nicotine flavors, even though the issues are only sort of related. It’s like a Ford truck getting into an accident and banning Teslas.” 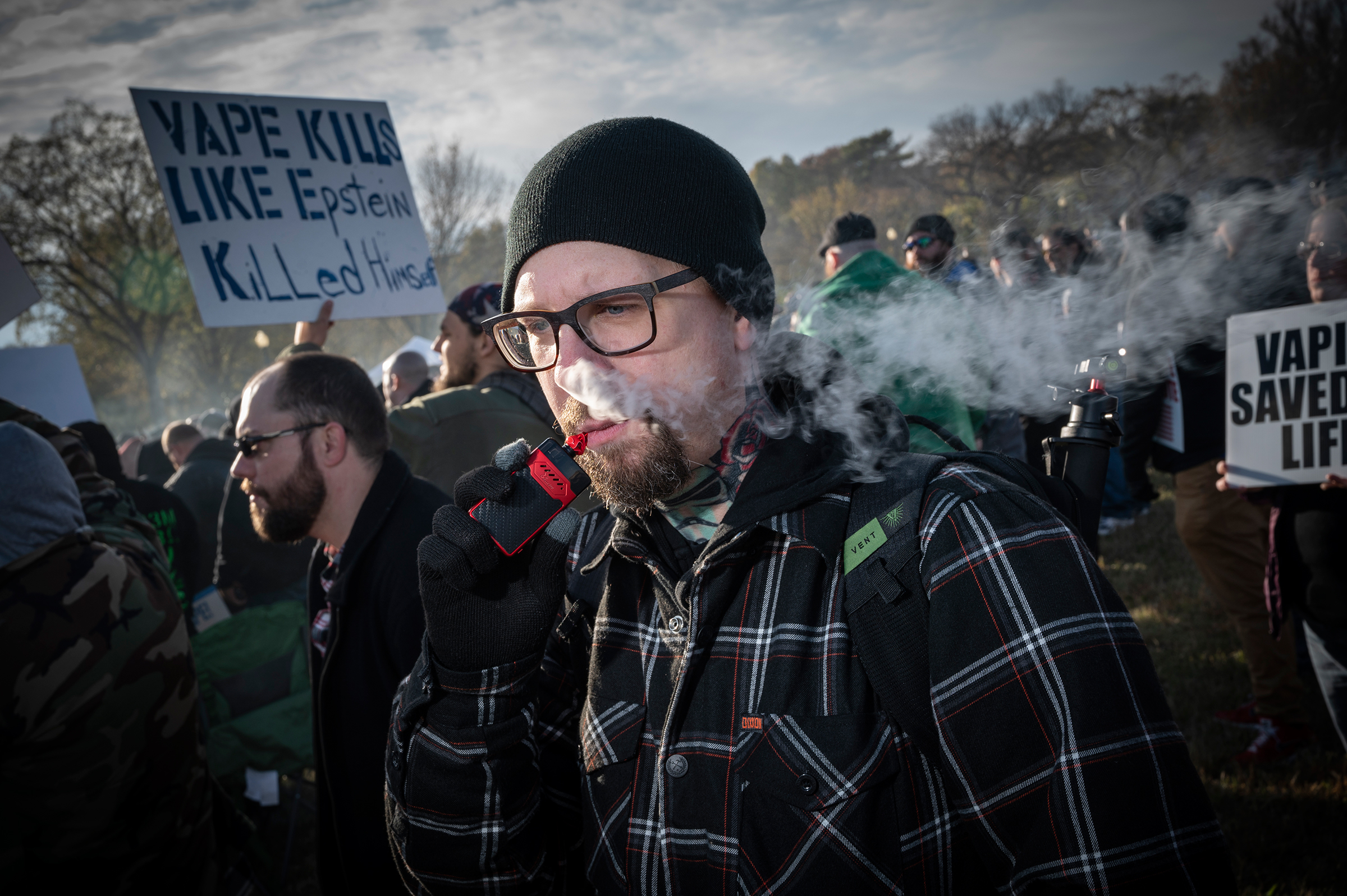 “I see no reason why I can go to a Ralph’s and purchase birthday cake-flavored vodka, but I can’t go into a store and purchase strawberry vape liquid,” says Nick Green, a pro-vaping YouTube personality. Photograph by David Butow for Rolling Stone

Although Schuchat noted in her statement that some of the victims had reported vaping nicotine only and not THC, many at the rally dismissed the idea that vaping nicotine could be the culprit behind even some of these cases of lung illness, attributing such reports to people being concerned about facing legal repercussions for using THC. Some attendees at the rally argued that vaping does not have any negative health implications at all, with one vape products distributor from Pennsylvania pointing to an obscure 1942 mice study arguing that propylene glycol, an active ingredient in e-cigarettes, could be effective in “killing cold germs.” (Propylene glycol is an additive frequently used in foods that is generally regarded as safe in small amounts by the FDA; it is not approved as a germicide, and the long-term effects of propylene glycol inhalation, as well as vaping in general, are largely unknown.)

It’s worth noting, however, that many of the vaping industry professionals at the rally did not make the argument that vaping is harmless, or indeed healthy. Many framed e-cigarettes as harm reduction tools, or smoking cessation aides that are less harmful than tobacco cigarettes, if not totally harmless. And some studies indicate that vaping is indeed an effective smoking cessation tool, though there is research to indicate that e-cigarette users are also more likely to develop long-term vaping habits and may also be more likely to relapse. “If you don’t smoke and you don’t vape, you shouldn’t do either. But ultimately that’s an adult choice,” says Green. “I see no reason why I can go to a Ralph’s and purchase birthday cake-flavored vodka, but I can’t go into a store and purchase strawberry vape liquid.”

A potential flavors ban could also yield large-scale political implications, according to many in attendance at the rally. Most of the rally attendees Rolling Stone spoke with, with the exception of one Bernie Sanders supporter, were former Trump supporters who said they would no longer vote for him in 2020 should be pass the flavors ban.

While an industry poll states that 45% of vaping industry members skew conservative, John Dolan, the owner of Smooth Vape stores in Pennsylvania who voted for Trump in 2016, estimates that anecdotally, that number is more like “70 to 80 percent” of those in the vaping community voted for Trump, and would likely revoke their support in 2020. “I’m a Trump supporter, so I was very, very let down [by the announcement of the ban]. My reaction was that I absolutely will not vote for this man,” he says. Of Trump’s chances in the 2020 election, he said, “there are 13 million vapers in the United States. I think [a flavors ban] would absolutely have an impact, at least in some states.” (According to a new Gallup poll, 8% of the U.S. adult population has vaped within the past week, which could make this a conservative estimate.) 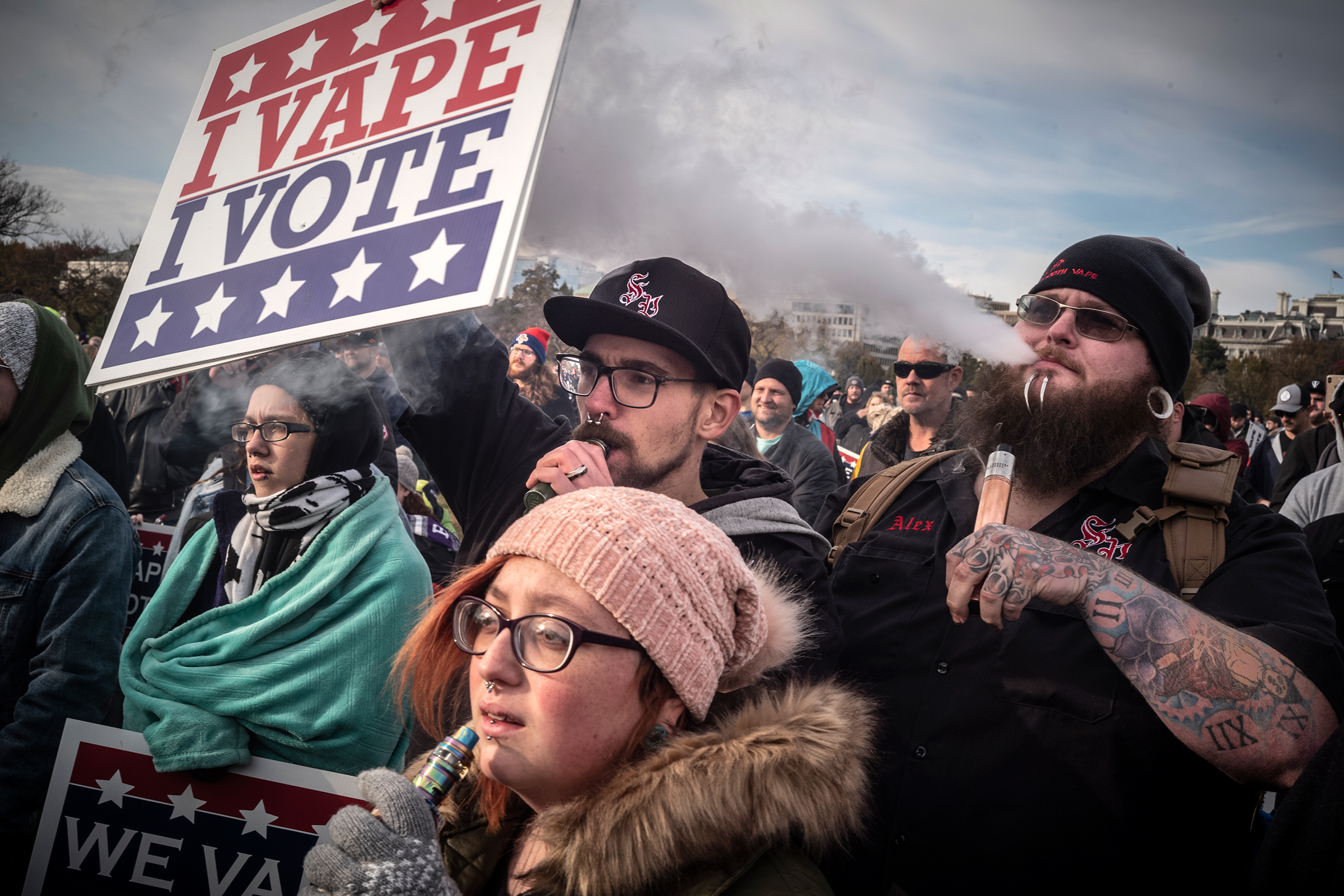 Hundreds of pro-vape activists gathered near the White House to urge Trump to stop the flavored vape ban. Photograph by David Butow for Rolling Stone

Culley also believes there are enough vapers who would revoke their support from President Trump to affect the 2020 election, citing Michigan, a swing state that went red in 2016 whose Democratic governor passed a controversial temporary vaping ban, as an example. Indeed, Paul Blair of Americans for Tax Reform has cited FDA data stating that there are hundreds of thousands of vapers in swing states like Michigan and Wisconsin — states that Trump won by an extremely thin margin in 2016, and which he will likely need again in 2020. “A lot of people say things like, ‘You’re a single voter issue over vaping? That’s ridiculous,’” Culley tells Rolling Stone. “It’s more personal than that. It’s a harm reduction tool for many people.”

Such numbers may indeed have prompted Trump to walk back the ban somewhat on Friday by suggesting that the policy may just limit the sale of vaping products to vape stores: “You know, there are some pretty good aspects,” he said “including jobs, frankly.” But for some former Trump supporters in the vaping community, that walkback may not have been enough. “Its’ definitely going to be a process to find a candidate who represent the interests of our industry…I’m in the market [for a new candidate],” said John Murphy, a vape store owner in Huntington, Kansas who attended the rally with his three young sons. “I need a candidate who is gonna be truthful and honest and forward and not wishy-washy.”

Even for those who did not support Trump prior to his announcement of the ban, or who did not vote in the election at all, the announcement of a federal vaping ban served as something of an engine for their politicization. “I wasn’t really very political, not at all, but now I am,” says Heidi Kazle, the wife of Smith, the Virginia Beach vaping stores owner. “I never thought there was anything I could get involved in that mattered that I can do, but this really hit close to home.”