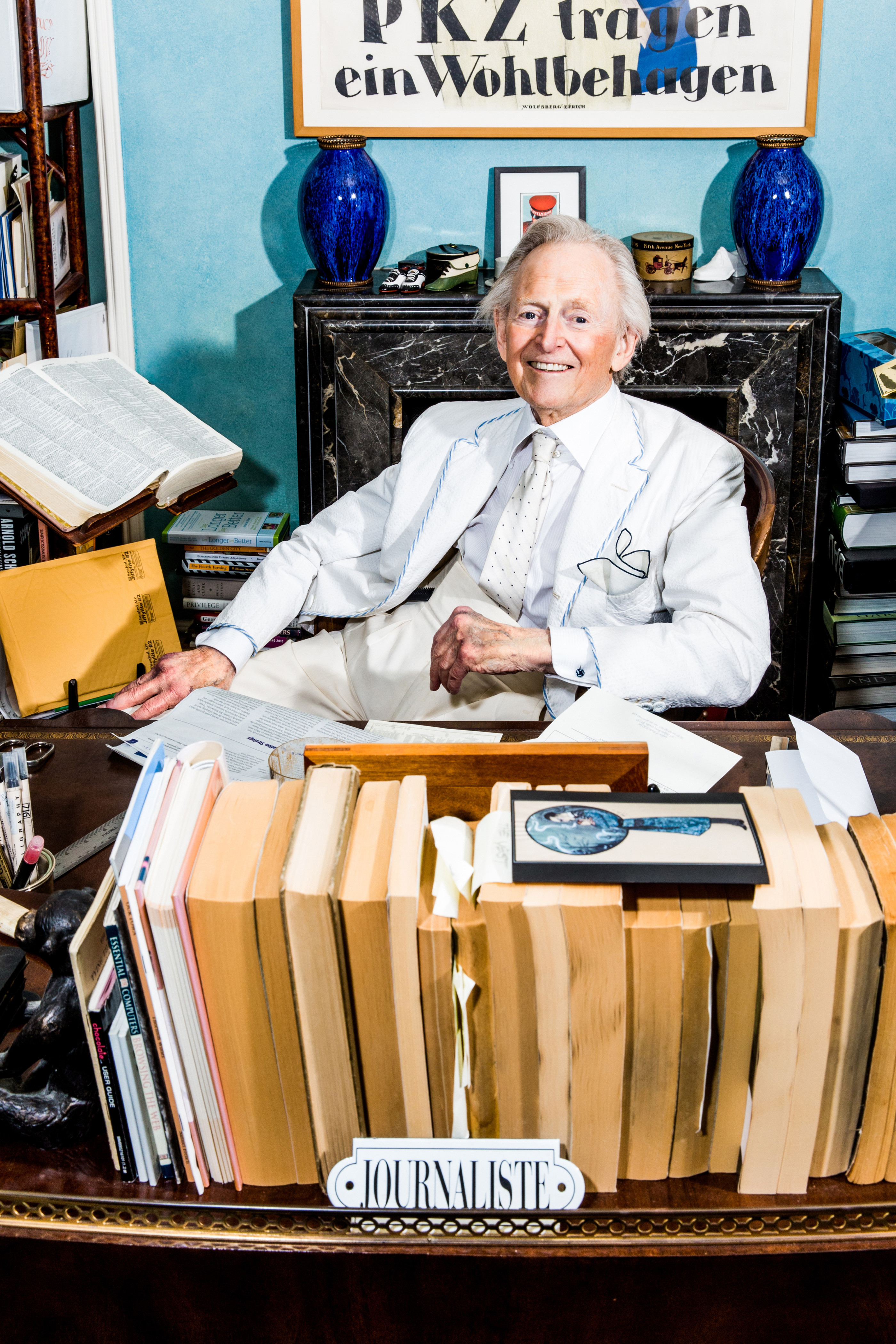 One of the greatest journalists and writers of the last century, Tom Wolfe, who died Monday at age 88, had a deep, longstanding connection with Rolling Stone. He and founder and editor in chief Jann S. Wenner met in the late Sixties, and the timing couldn’t have possibly been better. As one of the leading proponents of New Journalism, which reveled in a novelistic, far-from-staid approach to reporting and writing, Wolfe was interested in pushing the boundaries of his profession, and Wenner was an admirer of Wolfe’s work who wanted his new magazine to go where few had gone before.

Although earlier assignments had been discussed, Wolfe’s first story in the magazine arrived in January 1973: a four-part series on the December 1972 launch of Apollo 17, the last crewed moon landing. Wolfe embedded himself with the astronauts and wrote as if he were an astronaut himself. The series – whose first part was titled “The Brotherhood of the Right Stuff” – would eventually be the basis for Wolfe’s epic take on the space program, The Right Stuff.

In the decades to follow, Wolfe delved into topics like fashion and also wrote the original, serialized version of The Bonfire of the Vanities, published in every issue of Rolling Stone for a year starting in 1984. In an interview conducted in the summer of 2017, Wolfe reminisced about his time with the magazine and what he sought to accomplish there.

Jann Wenner was a fan of yours having read The Electric Kool-Aid Acid Test, and he reached out to you soon after.
The press was not very comfortable with psychedelics. But he called me up, as I remember, and introduced himself. I remember going on a ride from my house in New York to some restaurant, and the driver was the most total, complete hippie there ever was. He would often talk with us in the back seat. The most frightening ride I’ve ever had.

Looking back, the fact that you embedded yourself with Ken Kesey and the Grateful Dead for that book would make you a natural contributor to Rolling Stone.
That was part of doing journalism – somehow to get inside a world that’s not yours at all. Ken Kesey gave me many opportunities. He would say, “Put your notebook aside and just be here for a while.” It was very beguiling at the time. That was such an amazing period.

Is it true that you never tried acid?
No, I did not. This stuff was too powerful. I kept running into people who were having flashbacks. I managed to get inside other people without doing it. And maybe I’m wrong, but I found that just by talking to people about the trips, I got a lot of, I think, good material. I had to stay around for a couple of weeks in the ordinary course of journalism. A lot of time was required to do the so-called New Journalism.

The great literary innovation of the 20th century was New Journalism. I didn’t make up the phrase. Pete Hamill did. If you name something new, it’s almost already over. Think of the New Deal. The New Left. But I think still the best description of what we did was New Journalism. It featured elements that had never been done together and required enormous reporting. You stay with people for extended periods the way I did with Kesey and the Pranksters. I spent all this time in Georgia to write A Man in Full, going out to plantations. You can’t do that without a lot of reporting. It makes you feel like a decorated veteran of the war.

What appealed to you at that point about writing for Rolling Stone, which was still a relatively new magazine?
It was so new and I liked the way it into explored new music and new enthusiasm. And Jann is a great salesman by not acting like a salesman. He rode with the kids and all that. Rolling Stone was a natural place to do these stories. It was more innovative. Jann was just much more willing than other editors to take a chance and go with it. Hunter Thompson was the Mark Twain of the 20th century. It never occurred to me that Jann wouldn’t want something. I can’t remember any meeting in which he said, “Don’t do that.”

“Hunter Thompson was the Mark Twain of the 20th century.”

Your first assignment for the magazine found you traveling to Florida for a convention of record distributors. What drew you to that topic?
It never ran. The piece was, all things considered, weak. But it was really amusing. The people in the record business, the rack jobbers, were about as old-school and stiff as you could possibly be. They were the people who supplied the records that were popular at the time. And here were all these heads amongst them. At one point, one of the new groups that was very popular was supposed to perform at this conference, and they canceled at the last minute. So they brought in a really quite good musical group who did an 18- or 20-minute piece. There wasn’t a lead or a chorus, and they were very jazzy. And I recall that the meeting place was packed when they began, and there were about 10 people left when they finished.

Your first published story for Rolling Stone was the four-part series on the space program. Were the astronauts you interviewed aware of the magazine?
Most of them were not. Scott Carpenter was one of the few who did. He was a bit more hip than the others. I don’t think it was conceived in four parts. It just rolled along. If you get the material, the length of the piece wasn’t so important. People were always talking about keeping pieces short, but Rolling Stone said, “It didn’t make any difference as long as Hunter Thompson is writing it” [laughs].

In 1980, you were interviewed in the magazine, where you said you wanted to write a book about New York – four years before the serialization of The Bonfire of the Vanities started in the magazine.
It was originally going to be the nonfiction Vanity Fair. But I hadn’t been able to start the book. But I figured if I had a magazine deadline to do it, I could. That was my real motivation. And only Jann was crazy enough to go for this. Magazine serials weren’t in vogue anymore because of television. I approached Esquire and they hemmed and hawed and finally didn’t want to do it. It probably didn’t make sense for Rolling Stone in the commercial sense, but what I liked about Jann was he could turn a blind eye and jump off the deep end and see what happened. He proved that at a time when everyone said you had to compete with television and write short and get it done quickly. He would just let it run if it was good. Jann was always willing to do irrational things in the name of magazine journalism [laughs]. And it did get done, even though I had to change it a lot for book publication.

And of course, the first three chapters all ran in the same issue.
Jann wanted to make a big splash [laughs]. When I opened the first issue I said, “Oh, my God.” I felt a lot of pressure. I was spending the weekends in Southampton, and the church there had a bell. I would be tired by the end of the day and would go to sleep at 10, dead tired, and the next thing I would hear is the 12:00 bell. All 12 strokes. But after about six weeks I got into a sort of rhythm. I was also driving the production crew crazy because I would write while they were putting the magazine to bed. I’d be in their offices trying to write the end of my next chapter. Not even Jann stayed up for that. It was quite a time. But they were limber enough to take care of things.

“What I liked about Jann Wenner was he could turn a blind eye and jump off the deep end and see what happened.”

At one point, you considered bailing out on the project due to the stress, right?
I remember the stress to this moment. It’s all in your hands and there is nothing anyone else can do for you. I had worked at newspapers with stressful deadlines, and you’d pump something out. Memories were short and if you wrote a terrible piece one day, you could make up for it the next day. This was a new kind of experience.

As with your other work, you really immersed yourself in the research.
It dawned on me rather late in the game that to have a writer [Sherman McCoy] based on Park Avenue in this palatial apartment didn’t make any sense at all. But I was lazy and didn’t think of an occupation for him. A friend of mine set up a meeting with me with four young Wall Street guys, and this one lunch really opened my eyes to what was going on on Wall Street. It was a real boom time.

Research is everything. It’s not as hard as people think. You just have to show up one day and say, “I’m from Mars. What is this?” If somebody comes to you and wants information, you feel you want to tell this person to make you smarter than other people. To this day, I run into it all the time. It’s the greatest impulse in journalism – just to be asked about what’s going on in a certain situation. It’s powerful. It’s a technique used all the time by the police and FBI agents.

There are certain things print can do that a visible medium can’t. One of the main ones is pointing out details, little things in terms of dress, for example. Ordinary shoes. These things are practically impossible to present in movies or radio or any form. And they’re very easy to do in writing.

Your most recent pieces for the magazine were the two parts of Ambush at Fort Bragg, a novel about the sleazier side of TV news.
I enjoyed the idea that the people who, on the face of it, were the villains were not really as bad as the journalistic saviors of the republic who were going to expose them. In journalism, we often assume by nature that we’re in the right. In fact, we can go just as far off the deep end as the malefactors.

Were there any stories you wish you’d done for the magazine?
I blew one of the greatest tips I ever had. A woman called me early in the game and said, “There’s this new music around called hip-hop. There are lots of places in the Bronx where it’s played.” I should’ve jumped at that. I still kick myself for all the journalistic opportunities I missed.