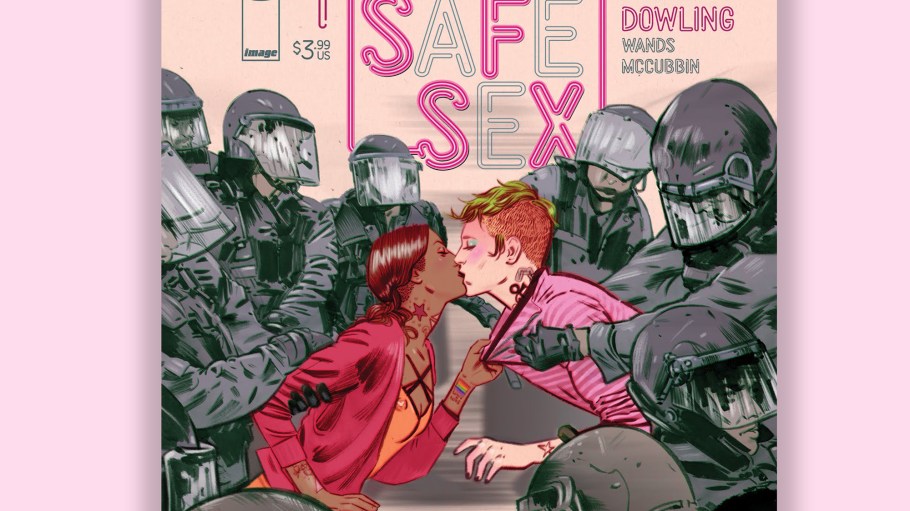 View Gallery
9 photos
Click the gallery link to read an excerpt from the first issue of "Safe Sex." Courtesy of Image Comics

For sex workers everywhere, being asked to “Fill in the gap in your resume,” is a standard question during job interviews. Skills like bondage and pole dancing are usually omitted and replaced with Microsoft Word and Adobe Photoshop. But for the comic book series Safe Sex (stylized as SFSX), a jailbreak heist action-adventure, these skills are about to become quite useful.

Created by Tina Horn and illustrated by artist Michael Dowling, SFSX is released monthly (Issue #3 became available on Wednesday). Once all seven issues are out, they’ll be released as a whole. “They’ll be collected in a trade paperback, which will read more like a novel or when you used to get a season on DVDs, like episodes of Buffy,” says Horn. In order to write SFSX, Horn — a Rolling Stone contributor, sex educator and host of the kink podcast Why Are People Into That?! — drew from her experiences as a sex worker. “In my experience, sex workers are real life superheroes with very special sets of skills,” Horn says. “We know how to work together to fight the power.”

What is SFSX about?
SFSX takes place in an American dystopia that is pretty recognizable to the world that we are living in, and that’s definitely by design. It’s a social thriller or satire, where the thing that makes it a dystopia is that sexuality and gender expression are over-surveilled, over-bureaucratized and over-policed, to just an extra-absurd-enough degree that the average reader — who may not have experienced their own sexual or gender identity being oppressed in that way — would feel the visceral feeling of how awful it would be.

The heroes of the story are the sexual underclass: queer people, sex workers, kinky people, leather perverts, and so on, who are trying to fight for their right to be themselves and to love the way that they love and to form communities and friendships, and also to make art and make their livelihood the way that they choose to. The villains are not only the ultra-conservative government organization that has taken over American civil life, known as the Party , but also the people who have decided to compromise themselves in order to gain power within the Party. So we have [Mrs.] Boreman who’s a second wave feminist who is ready to throw other people who could be her allies under the bus in order to gain power within the party. And then Dr. Powell, who is an upper middle class, white gay man who is willing to throw what he might see as more extreme or perverted forms of queerness under the bus in order to gain power.

Tell me about the main characters.
Our protagonist is Avery, who has spent her 20s as a pornographer working with that underground counterculture collective known as the Dirty Mind. That’s where her friends are, her community is, her livelihood is, and her way of loving life. She’s in her mid-30s and as the government is starting to raid the Dirty Mind and make their lives less stable and less safe, she decides to bail on her friends and try to assimilate and live a more conformist life. And so we meet her and she and her husband, George, are trying to blend in with this new world order and doing a really bad job [laughs].

Their inability to fall in line has consequences and that sets off the action of this first arc of the of the series — which is called Protection — where Avery has to band together with the friends that she bailed on and left behind to try to break some of their friends out of the nefarious Pleasure Center, which is the center of the over-bureaucratized American life in San Francisco. They don’t know if their friends are incarcerated or dead. What’s going to follow is jailbreak heist action-adventure, where the heroes are people who have bondage skills and role play skills and all of the things that can come from working in various forms of sex work. Like core strength from working the pole and the ability to be glamorous in any situation. All of those skills are actually quite useful when you’re justifying action-adventure.

Tell me about the relationship between Avery and George. Why did you decide to make George a cis white man?
I’m so glad you asked this question. I’m a cis gender and bisexual, and I knew as soon as I got the opportunity to make a mainstream comic that I wanted it to be a queer comic. I mean, anything that I make is going to be queer, but I wanted the scenes to be queer, the political subtext to be queer and I wanted my main characters to be queer. I’m very aware that I am really putting the word out to people, “Hey, I’m a queer creator writing a queer comic and the central romance that we see established from issue one is technically a [cis-gender, heterosexual] romance.” There are others characters in the story who are queer whose relationships also figure very strongly in the story. So fear not, readers who are interested in more representations of queer characters and queer relationships and queer desire.

And when I was coming up with the central storyline and the protagonists from the point of view characters, I came up with this idea of a sex worker who is called Avery, who is feeling burnt out and tired of fighting. So the idea of her having a boyfriend who she could marry and get privileges — which are even more extreme in the world of SFSX than they are in real life America right now — that was the story that I wanted to tell.

What if you have someone that you genuinely love and are intimate with who can offer you privileges? What are the consequences of making that choice? And so George needed to be able to offer that to Avery in order for that characters to make sense. One of the things I do really like about the George character and the role that he plays in the story is that right from the beginning, George is the damsel in distress of the story. He is the one in need of being rescued. And the irony, ultimately, is that he’s the one that needs protection and rescuing. I think it’s fun to have female superheroes rescuing men for a change.

Can you talk about the resemblance between the dystopia and the world today that we live in?
I started working on this story in summer of 2017. And my background is as a sex worker, and also as somebody who has done a lot of nonfiction writing and media making about the sex industry and sexual labor politics. My community and my world is comprised of people for whom the horrors of safe sex are already a reality.

The world of SFSX, where everybody has to file paperwork either at the DMV or through technology every time they have sex, and where spaces of sexual joy and celebration are violently raided by the police, where high heels and vibrators are considered illicit materials…that is a world that many of us are already dealing with. My hope is that is that readers who don’t think they have been dealing with those things read this and have more empathy for the people who are already dealing with it, and also recognize that if we’re dealing with it, they’re coming for you next. And that’s always been the case.

You have a career in nonfiction and a successful podcast, but this is your first comic book series, correct? What is that experience like?
I had some really valuable guidance in learning how to apply my existing talents to the world of writing fiction and writing comics. Sex workers are storytellers, so being a dominatrix has really set me up for having the having the stomach for torture, which is really useful when you’re writing action-adventure and sci-fi. I have a very real world understanding of bondage and pain and interrogation and endurance. Those techniques are useful, whether you’re doing them in the context of consensual sadomasochistic play or you’re imagining those things are happening to the characters that you’ve made up.

Being a pornographer definitely helps you to understand how to create a narrative arc and how to build tension and suspense, and being a podcaster really helped me to understand the rhythm of language and how people speak. Not only do I host Why Are People Into That?! and have lots of conversations on the show with queer folks, but because I also produce and edit the show, I think I have a pretty keen sense of how different people speak so I can kind of switch into different cadences of different characters, so that not all of my characters just sound like a mouthpiece for me. And then my background in nonfiction and journalism, I was fortunate enough that I got to learn how to do this medium while writing about a lot of the same topics that I write about in my nonfiction. So that was an advantage in a lot of ways. Because I can speak with a lot of authority about what a lot of the themes of SFSX are like and what they’re about.

What do you hope SFSX contributes to queer sex worker representation?
I hope that it opens door for gatekeepers to realize that people are interested in queer sex work and stories written by queer sex workers. I have dealt with a lot of oppression in my life and censorship in my life because of being queer, because of being a sex worker and being out in my work. But I also have an enormous amount of privilege as a white person and as a cis person. Even though I have a lot of student debt, my education has given me a lot of social mobility. And so my hope is that the success of my work means that other people who have been more marginalized than me are given more opportunities, and then I’m not…queer lady on a panel, or even that like, the only time I’m on a panel with other queers is not just about queer comics, it’s about some other topics.

I hope that SFSX makes straight people feel the way that I felt as a white person seeing Get Out. When I as a white person saw Get Out, I was incredibly entertained, it was scary, it was funny, it’s a perfect movie, and it will give you the visceral response of, this is actually how horrifying it is to be a black person in America today. And that galvanized me to want to fight white supremacy.

So I hope that straight people and people who don’t have experience in sex work and have had a normative experience of sexuality in society will read SFSX and go, “Oh, this story is funny and sexy and suspenseful and entertaining. And also, it gives me empathy for the humanity of the real life people who are going through this every day and it makes me want to stand up for that.”