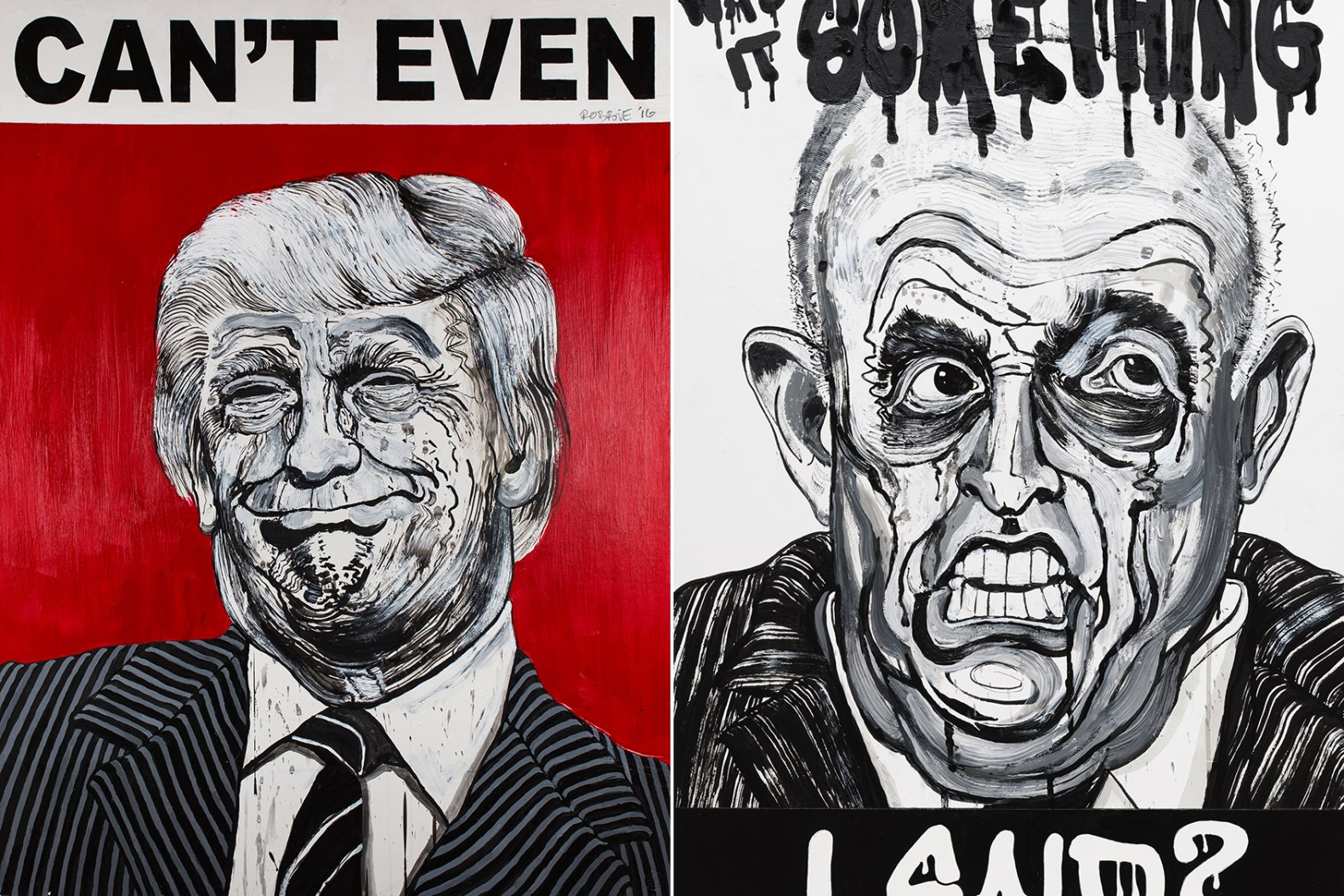 Robbie Conal had hoped to retire by now. The 74-year-old illustrator and guerilla street artist had spent more than three decades satirizing conservative lawmakers when he moved from Los Angeles to Los Osos, an idyllic beach community on California’s Central Coast, in 2014. Feeling burnt out on his usual subjects, which for many years included President George W. Bush, he’d recently begun painting portraits of his cats. He dreamed of sketching the pelicans and otters on the bay near the home he shares with graphic designer Deborah Ross, his wife of 28 years. Conal would’ve been perfectly happy if he never drew another politician again. And then Donald Trump became president.

“It has compelled me to do more work than I’ve ever done in my life, and it just pours out of me,” Conal tells Rolling Stone. “It’s cathartic in a way.”

Simultaneously revolted and reinvigorated by the Trump administration, Conal has spent the last two years furiously making unflattering, demented-looking portraits of the president — or as Conal likes to call him, “the mad king” — along with more than a dozen members of his inner circle. Each grotesquely painted caricature is accompanied by word play and politically loaded imagery: Attorney general Jeff Sessions is depicted wearing a Russian fur cap, an allusion to possible Russian collusion in the election, and Counselor to the President Kellyanne Conway is rendered with a Pinocchio-like nose, a reference to her coining of the term “alternative facts.” Titled Cabinet of Horrors, an exhibition of the paintings opens Saturday and runs through December 8th at Track 16 Gallery in Los Angeles. Posters of the paintings have also appeared on the streets of cities including New York City, Philadelphia and Washington, D.C., thanks to Conal and his team of guerilla collaborators across the country.

“I’m actually energized by all of this in a way,” says Conal, who speaks with a recognizable New York accent, the result of his upbringing on the Upper West Side of Manhattan. The irony of the Trump administration spurring his artistic renaissance — or what he jokingly refers to as his “late period” — isn’t lost on him. “A lot of my friends will come up to me, and even people I don’t know who know what I do, and say, ‘This must be a great time for you Robbie,’” says Conal. “I say, ‘Yeah, great for me and terrible for the country and the world: thank you very much.’”

Conal has no illusions that his posters will change anyone’s mind about the Trump administration — persuasion is the role of propaganda, he says, adding that he’s touchy about the subject because his mother’s extended family was killed in the Holocaust — but he hopes they will at least “tickle people into thinking along with me about these issues.”

Usually when he paints, Conal, a diehard Dodgers fan, watches baseball or reruns of NYPD Blue (he owns copies of all 12 seasons and has an affinity for detective Andy Sipowicz). But one afternoon two weeks ago, he was in his studio watching a different kind of drama unfold in real time: Supreme Court nominee Brett Kavanaugh’s testimony after being accused of sexual assault by Christine Blasey Ford. “That was just an incredible strip tease of his character, you know, like just playing it off with spittle and everything, tears and spittle,” says Conal. “It was just horror-ific, and anybody who actually doubts what kind of drunk he is, is from Mars or something.”

The resulting portrait, which depicts Kavanaugh in a state of fury, with puckered lips and dark bags under his eyes, is such a recent addition to The Cabinet of Horrors that Conal says even the gallery doesn’t know about it yet. He painted it as he watched the hearing, working from still frames on the television to make his “own expressionist composite” of the newly confirmed Supreme Court Justice. But capturing the essence of this particular subject, Conal insists, required little imagination. “This adolescent white male rich privileged bad boy from this private school just came roaring out of him, you know, oozing out of him,” Conal says. “I just had to transcribe it almost.”

The son of two labor union organizers, Conal was an only child and a “latchkey kid,” he says, whose parents sent him to art museums instead of daycare. “When my parents found out that I was gonna be an artist and not the second coming of [socialist organizer] Eugene V. Debs, they were a little disappointed,” says Conal.

Trump Looks to Ditch His Own Social Media Site

A self-described “original hippie in the Haight Ashbury,” he once held the record at San Francisco State University, he says, for having the most undergraduate credits without actually graduating. He was ultimately kicked out in 1969 for occupying the administration building in protest against the Vietnam War. He later completed an MFA at Stanford University, but it wasn’t until the Reagan administration of the 1980s that Conal found his calling making political posters.

“I was in California when Ronald Reagan became governor, so we had kind of a foreshadowing of what it was gonna be like when he became president,” Conal says. “When he became president, I started doing these little black and white paintings of him with his cabinet called ‘Men With No Lips,’ and that became the first poster.”

Cabinet of Horrors bares a strong resemblance to his early Reagan posters. Only this time, the portraits are decidedly more monstrous — the lines are thicker and sloppier, the expressions less realistic and more cartoonish, more sinister. Even the accompanying text is more biting and accusatory than in Conal’s earlier works — the result of what he sees as a more toxic administration. “In my life I don’t think we’ve seen anything like it,” Conal explains. “This has metastasized much farther, the cancer is much deeper and uglier.”

But for an artist who appears to be producing the darkest work of his career, Conal has a surprising degree of optimism about the future of the country, thanks in part to the years he spent teaching at the University of Southern California, and within the University of California system before that. “I taught all over the place and I see what the potential is,” Conal says, adding that he’s excited not just by young students and activists, and women in particular, but also by emerging progressive leaders like Alexandria Ocasio-Cortez. Besides, he says, quoting a line from Kavanaugh’s testimony, “What goes around comes around. November 6th, baby… Women are going to come around and kick [Trump’s] head.”

Or, at least, Conal hopes so. After all, he’d like to retire eventually. He wouldn’t mind spending more time with his Tabby cats, brother-and-sister Louie and Ella, named after the two jazz greats. He’d rather be painting their portraits.

Correction: A previous version of this article stated that Christine Blasey Ford and Brett Kavinaugh were Yale classmates. They allegedly knew each other during high school, not college.