The summer of 1993: there’s a new movie out called Dazed and Confused. But Hollywood doesn’t have high hopes. It’s a time capsule of a small Texas town, in the summer of 1976, set on the last day of school. The plot? Just high-school kids cruising in search of kicks, with a soundtrack of Skynyrd and Frampton and Aerosmith. Worse, it has a cast of nobodies—Parker Posey, Ben Affleck, Joey Lauren Adams, Renee Zellweger, Wiley Wiggins. Plus this local Texan dude from down the road—just a bit part, barely in the screenplay, but he keeps drawling his way into scenes because he’s just so damn funny, even though nobody can quite figure out if he’s kidding. His name: Matthew McConaughey.

Melissa Maerz’s brilliant new book Alright, Alright, Alright tells the gloriously weird story of how a team of rebels, misfits, and outsiders made Dazed and Confused. Writer/director Richard Linklater’s low-budget film was a box-office bomb, but it became a legendary classic. It only could have happened in the early Nineties—a revolutionary moment in pop culture, with a new generation of artists rising up to take their shot, the rules be damnded. The film is full of unknown faces—some became stars, some didn’t. McConaughey stole the show as Wooderson, the party commando who gives out Zen wisdom like “just keep livin’” and the mantra that gives the book its title: “Alright, alright, alright!” 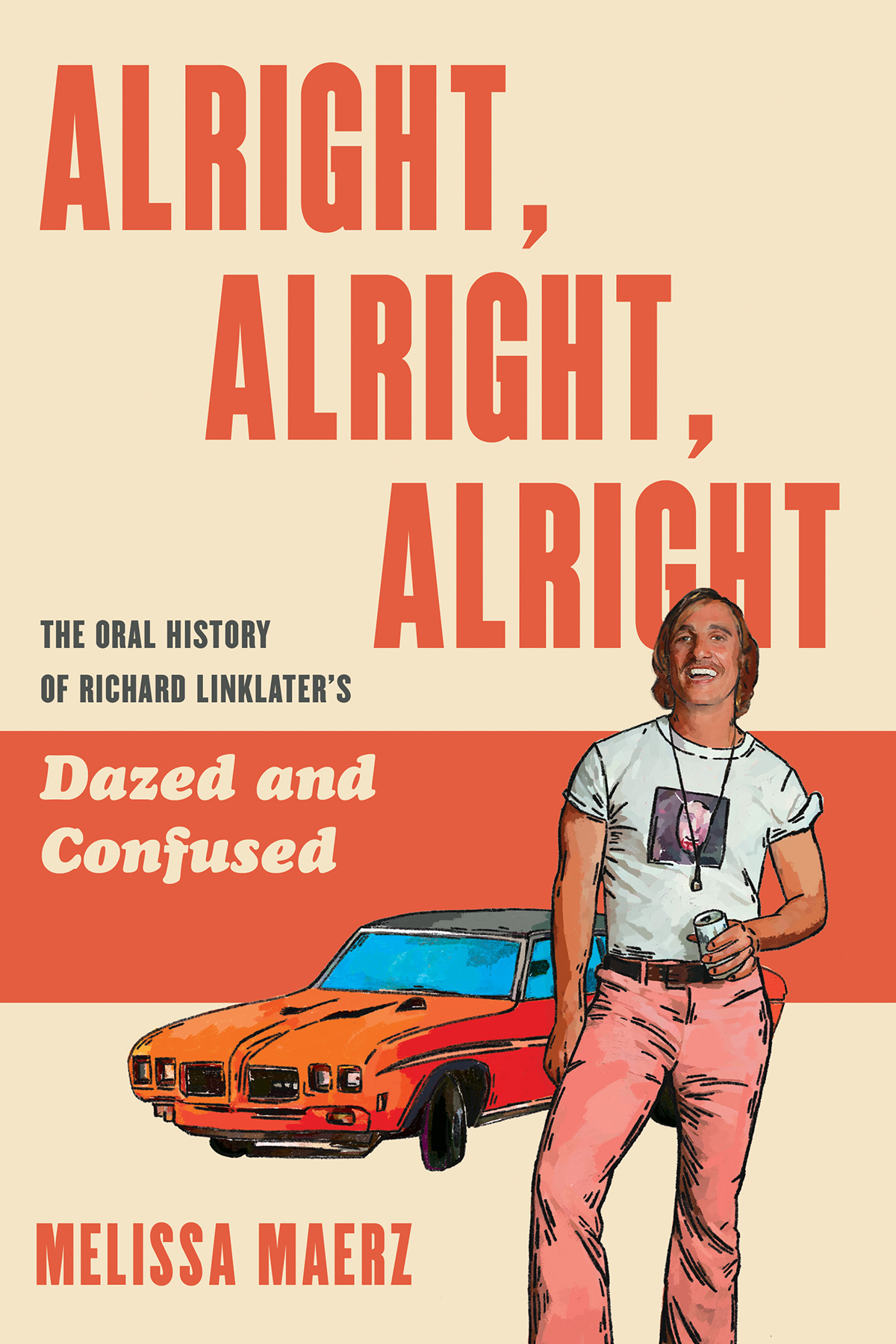 Melissa Maerz, a former Rolling Stone writer and editor, tracked down nearly everyone involved. But she does a lot more than just weave the oral history behind a famous movie. She makes it feel like the story of a generation—not the 1970s one, but the 1990s one. This book does for the Nineties what the movie did for the Seventies: a lovingly detailed portrait of an era, celebratory but inevitably elegiac, full of tiny comic moments that seem to sum up the decade’s craziest hopes and dreams. Maerz shows why after all these years, Dazed and Confused just keeps on livin’.

None of this was supposed to happen. Linklater was a brash Texas longhair whose only well-known movie was his freewheeling 1991 indie Austin story, Slacker. The closest thing to a star was Milla Jovovich, who’d been in Return to the Blue Lagoon. But it was the anything-goes Nineties, a time when indie film seemed to be on the verge of taking over from the Hollywood dinosaurs, just like punk bands and gangsta rappers and riot grrrls were rewriting the music-biz rules. Linklater was telling a Seventies story, but without treating it like a camp joke—it was a movie made by and for young Americans, about our lives. And as the book reveals, the young Americans in the cast spent the summer all over each other—except the only one on the set nobody wanted to hook up with. That would be Ben Affleck, who laments, “Everybody was having sex with each other, except me.”

Linklater was obsessive about getting the details right—as in the scene after the Little League baseball game, when the kids line up to say, “Good game, good game.” As the book reveals, he had to fight tooth and nail to keep that scene, over the producer’s objection it was just a waste of time. It’s a brief moment in the movie, but a crucial one. As Ethan Hawke tells Maerz, “When the game is over and Wiley’s character goes through the obligatory ‘good game’ line—thats where the movie stumbles on real grace, the stupidness and beauty of our ridiculous lives.”

He wasn’t kidding. Gen X went to see the movie, then sat in the parking lot outside the theater arguing over it, then got on our land-lines the next morning to tell our friends they had to see it. It became a word-of-mouth phenomenon. Yet somehow the mystique keeps growing, as an evergreen lets-watch-it-again classic. In October, Linklater organized a benefit “Virtual Reunion,” a table read with most of the original cast, plus a live Q&A hosted by Patton Oswalt. (Alright, Alright, Alright makes a fine double bill with Glenn Kenny’s excellent Made Men, on how Martin Scorsese made Goodfellas, another classic journey through the past you can keep re-watching forever.)

As the book reveals, some have mixed feelings about the film’s legacy. Sasha Jensen, who played Don from the football team, talks about a Halloween where he steps into a bar where they’re having a Dazed and Confused party (the bartender is Wooderson) and hoping to get a free drink. Wiggins says, “There’s now been about 8 or 9 famous baseball players who are skinny with long hair, and every time there’s a new one, I have to close Twitter because there’s literally hundreds of people making the same joke about how, you know, Chuck Corndick is the new Wiley Wiggins. It never gets old for those people!”

The 100 Greatest Movies of the Nineties

The most fascinating characters are two of the high-school girls: Parker Posey and Joey Lauren Adams. Every decade has an iconic friendship that defines the era—think of Belushi/Ackroyd in the Seventies, or Run-D.M.C. in the Eighties. Posey and Adams became that archetypal Nineties duo—two eccentric Gen X actresses who wouldn’t have had any place in the mainstream a few years earlier. On the Dazed set, they became fast friends, shrewdly getting together to write their own scenes, realizing they might not get this chance again (and they didn’t). The director gave them room to improvise and experiment. As Adams says, “Rick always treated you in a nonsexual way, and for all of us women who had been treated in sexual ways for so long, to have a man who’s not like that? It’s weird.”

Their bond was electrifying, and not just to them—for the rest of the 1990s, they were linked in the public imagination. Oh, their poker-table banter and country songs in Sleep With Me—none of us had ever seen women interact like this onscreen before. Sadly, they fell out—as Adams says, “I was always her sidekick and I needed to get out from under that.” But it makes you yearn for a whole book about these two.

The book’s most poignant moment comes near the end. Jason London, who stars as stoner football hero Randall “Pink” Floyd, says, “Ten years ago, I got a brand-new Mac laptop and I called Apple. A guy answers and he says, ‘Hi, what’s your name. I said, ‘Jason London.’ And he goes, ‘Jason London! It’s me, Wiley!’” On the other end of the line: Wiley Wiggins, now working the AppleCare phones. Years after the classic scene where London coaches Wiggins on how to answer the coded question “Are you cool?”, they’re a couple of ordinary middle-aged dudes, still trying to just learn the password.

If this were a different kind of Hollywood story, this scene might feel sad. But somehow it fits right into the just-keep-livin’ ethos of the movie. None of these people aspired to be movie stars, much less celebrities. They wanted to be character actors, artists, story-tellers, the way their indie-rock equivalent aspired to be long-running, well-respected cult bands. Linklater and his team wanted to tell a story about ordinary kids in the Seventies, but they ended up in the middle of a story about the Nineties. In the book, Quentin Tarantino explains why he has watched Dazed and Confused so many times: “These people have become my friends.” Like the movie, the book is pure pleasure because makes you feel like you’re hanging out with these friends—it’s a joy to jump and join them on a slow ride.