When Fred Goodman began working on a book about Allen Klein, former manager of the Beatles and the Rolling Stones, he knew he was taking on a figure many fans saw as a shady operator. Klein, after all, had snatched up the publishing rights to everything the Stones recorded up to 1971 (they claimed they didn’t understand what they were signing away), and was a flashpoint during the Beatles’ breakup (Paul McCartney despised Klein and wanted to hire a different manager). “I always heard he was this evil guy,” says Goodman, a former Rolling Stone editor. “I felt there had to be more to the story.”

A few years ago, Klein’s son Jody approached Goodman about writing a book about his father, who died from Alzheimer’s disease in 2009. Jody offered access to his father’s archives, as well as complete editorial control. “He made me an offer I couldn’t refuse,” says Goodman.

The Real Story Behind the Beatles' Last Days

The end product, Allen Klein: The Man Who Bailed Out the Beatles, Made the Stones and Transformed Rock & Roll, is the first book to tell Klein’s full story — from growing up in a Newark, New Jersey, orphanage to taking over Sam Cooke’s career in the early 1960s, through his own downfall in the 1970s, when the music industry turned on him. Along the way, he acquired the rights to music by Cooke, the Animals and more, all of which still generate a fortune for his company, ABKCO. 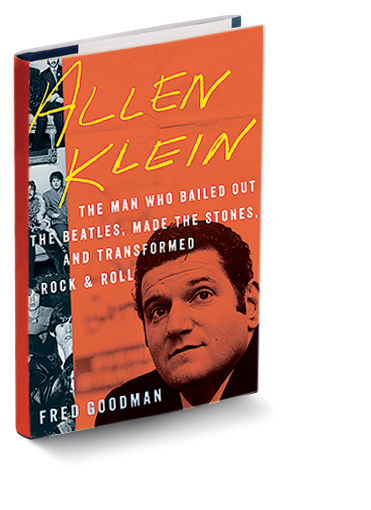 Goodman discovered that Klein is far from a cartoonish villain; among other financial feats, Klein rescued the Beatles’ Apple Corps, which had been bleeding money. “The artists all wanted someone like [Allen] to go fight the record companies. They wanted a bully,” Goodman says. “He was aggressively advocating for artists. [In the 1960s], the notion that artists have leverage and are grossly underpaid was a revelation.”

Klein was always looking out for himself, too. “His worst sin is he didn’t really educate his clients,” says Goodman. “He gave them what they asked for, but if he had been good and earnest he would have said, ‘You’re asking for the wrong thing.’ ”

The book is full of great anecdotes. In 1997, Klein learned the Verve’s “Bitter Sweet Symphony” sampled a symphonic version of “The Last Time” without seeking the Stones’ permission. Klein persuaded frontman Richard Ashcroft to sell the publishing and his rights as lyricist to ABKCO for $1,000. Klein scored big when “Bitter Sweet Symphony” became a hit. Ironically, the Stones song appeared to borrow from the Staple Singers’ “This May Be the Last Time.” “Fortunately for the Stones,” Goodman writes, “the Staple Singers weren’t managed by Allen Klein.”