It was Shawn’s first time tripping on psilocybin mushrooms. He took them with friends, but hours later, they’d all gone home or fallen asleep. Overwhelmed by the energy of two quarreling dogs, he took refuge in the basement, where his brain found patterns in everything he saw. He couldn’t stop thinking in maddening loops. It was past midnight, the trip wouldn’t end, and nobody was around to help. He was terrified of being trapped alone with his hyperactive mind.

Where could Shawn turn?

Prior to this April, he might have just kept spiraling. Today, a Google search would turn up the number for the Psychedelic Peer Support Line, sponsored by Fireside Project, launched in April as a one-year pilot offering limited hours Thursdays through Mondays. The support line, which can be reached by texting or calling 62-FIRESIDE (623-473-7433), was envisioned by former lawyer Joshua White in the early months of the pandemic, when the possibility of widespread psychedelic healing was the one thing giving him hope. White is now the executive director of Fireside Project, which coordinates the line, connecting callers and texters with trained volunteers who can help them endure and learn from challenging encounters with psilocybin, LSD, and other psychedelics.

It goes beyond bad trip prevention. Through the hotline — which also supports sober people who are trip-sitting their friends, and those wishing to process past experiences — Fireside aims to promote a holistic approach to preparing for, enjoying, and integrating psychedelic experiences. Their mission feels increasingly urgent as substances like psilocybin and MDMA are decriminalized or legalized in numerous cities and states, and research touts their potential for sensational therapeutic benefits.

“More people are discovering psychedelics,” says Dr. Katrina Michelle, former director of harm reduction at the Multidisciplinary Association for Psychedelic Studies (MAPS) and a Fireside Project advisor. “They may have heard something on the news about how they have healing properties.” But headlines don’t tell the whole story, and people tripping without proper support can unearth traumas they’re not prepared to handle. By making peer support widely available, says Michelle, Fireside’s hotline helps with “cultivating communities that can appreciate the entire process and support one another through it.”

Shawn, the caller tripping alone in his basement (whose real name has been withheld for his privacy) was connected with shift supervisor Angela Carter, who began by ensuring he was physically safe, then asking questions meant to “encourage introspection.” Shawn was frightened by his mind’s frantic pattern-seeking.

“I hear what you’re saying,” Carter told him. “That sounds intense. A lot of people have similar experiences.” They told Shawn that research suggests sensitivity to patterns is a common feature of psychedelic trips. He seemed comforted by this knowledge, as well as by learning, with Carter’s help, that changing his physical reality — such as by lying on the floor, or introducing a blanket — could improve the situation in his head. 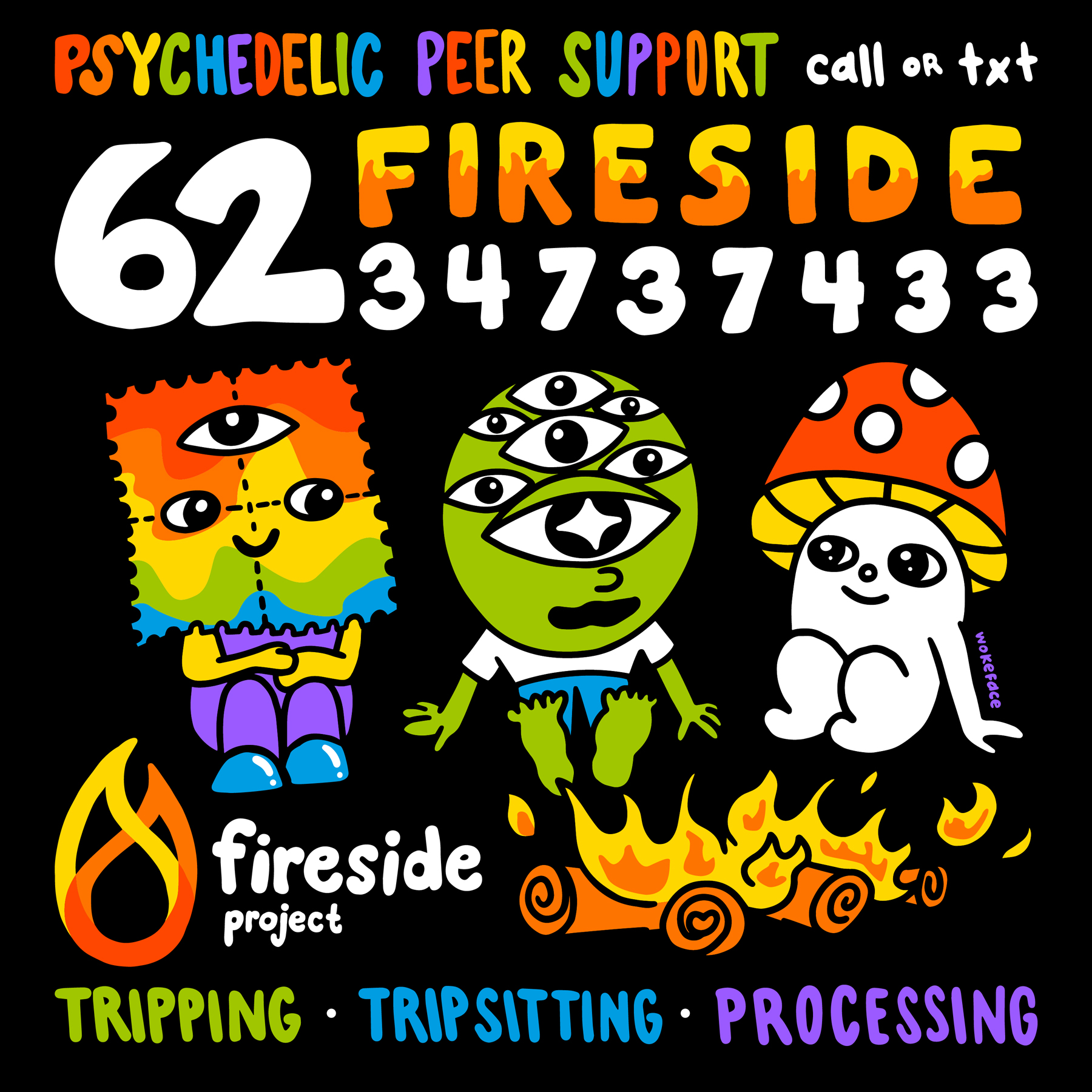 Courtesy of the Fireside Project

“I was helping him become aware of his agency,” Carter tells Rolling Stone. “Our job [as volunteers] is to help people find the skills they already have, to create a situation that they want.”

Such an approach is typical at Fireside, which in March finished training its first 31 volunteers in a 36-hour program that included daily meditations and exercises intended to help cultivate a calm, authentic, and non-judgmental presence. (The training was conducted on Zoom, as Fireside volunteers work remotely from all around the country.) “Everything starts with where you’re at,” says support line director Adam Rubin, who designed the training after years of experience providing trip support at Burning Man and other festivals, sometimes in the comfy yurts erected by MAPS’ Zendo Project. He says volunteers must be emotionally grounded because tripping people are often sensitive to authenticity. When providing support on the hotline, he says, “we want to be ourselves.”

In addition to specific tools like reflective listening, validation, and normalization (all evident in Carter’s response above), Rubin teaches volunteers to “sit with” rather than “guide” callers and texters, resisting the urge to steer their experiences toward a certain outcome. He summarizes the philosophy in a Fireside mantra: “Trust the process.”

For Rubin, trusting the process means recognizing that with psychedelics, you can’t always be in control, as “there’s something going on that is bigger than our ability to cognitively or intellectually understand.” A trip-sitter’s instinct might be to ease a friend or patient’s “bad trip” by talking them out of their experience, such as by saying it isn’t real. In line with the ideas of humanistic psychology, Rubin instead guides people to accept and explore their difficult thoughts and feelings, so their own “inner healer” can guide them toward resolution.

“When we are trusting the process, we’re also saying it’s OK to feel bad, it’s OK to not be OK,” says Rubin. “This is a part of a bigger thing happening and we’re gonna be with you through it.”

Not everyone wants to overcome psychic hurdles in order to get their healing. As psychedelics proliferate in clinical settings and are eyed by investors who see a potential billion-dollar industry, scientists are working to engineer alternatives with lower risk of “bad trips.” Washington-based start-up CaaMTech designs blends of mushroom-derived compounds that it says increase “the probability for a euphoric experience,” while Field Trip, a Canadian company traded on the New York Stock Exchange, is developing a proprietary psilocybin-like compound that wears off after two or three hours, more than twice as fast as tripping on real mushrooms.

Yet Dr. Michelle agrees with Rubin that the potentially difficult aspects of psychedelics are important to their power. With such medicines, she says, “you’re letting go of your defense mechanisms… which are there to protect us, but can also inhibit us.” With defenses lowered, past traumas can make themselves known, a painful yet often transformative process. With the proper support (like a Fireside volunteer), “a difficult journey has its place and doesn’t have to be seen as negative.”

The difference between a “difficult” and “negative” trip often comes down to what happens after. Michelle says integration, the process of applying the insights of a psychedelic experience to one’s everyday life, is the most important part: “that’s where the growth happens.” People tripping outside of clinical settings may not consider this stage of the process, but it’s now easily accessible through Fireside’s line; in its first two months, more than one-third of the 350 calls and texts received were for follow-up support.

Volunteer Jimmy Nguyen took a thirty-minute call from someone seeking to process an ayahuasca experience from five years ago that still felt unresolved, reminding Nguyen that some people think of psychedelics like a pill for a headache — “I’m gonna take medicine and it’ll all be better” — when in fact they need space to process after the drug wears off. Fireside is “normalizing to the world that we can and even should be talking about these experiences,” Nguyen says. 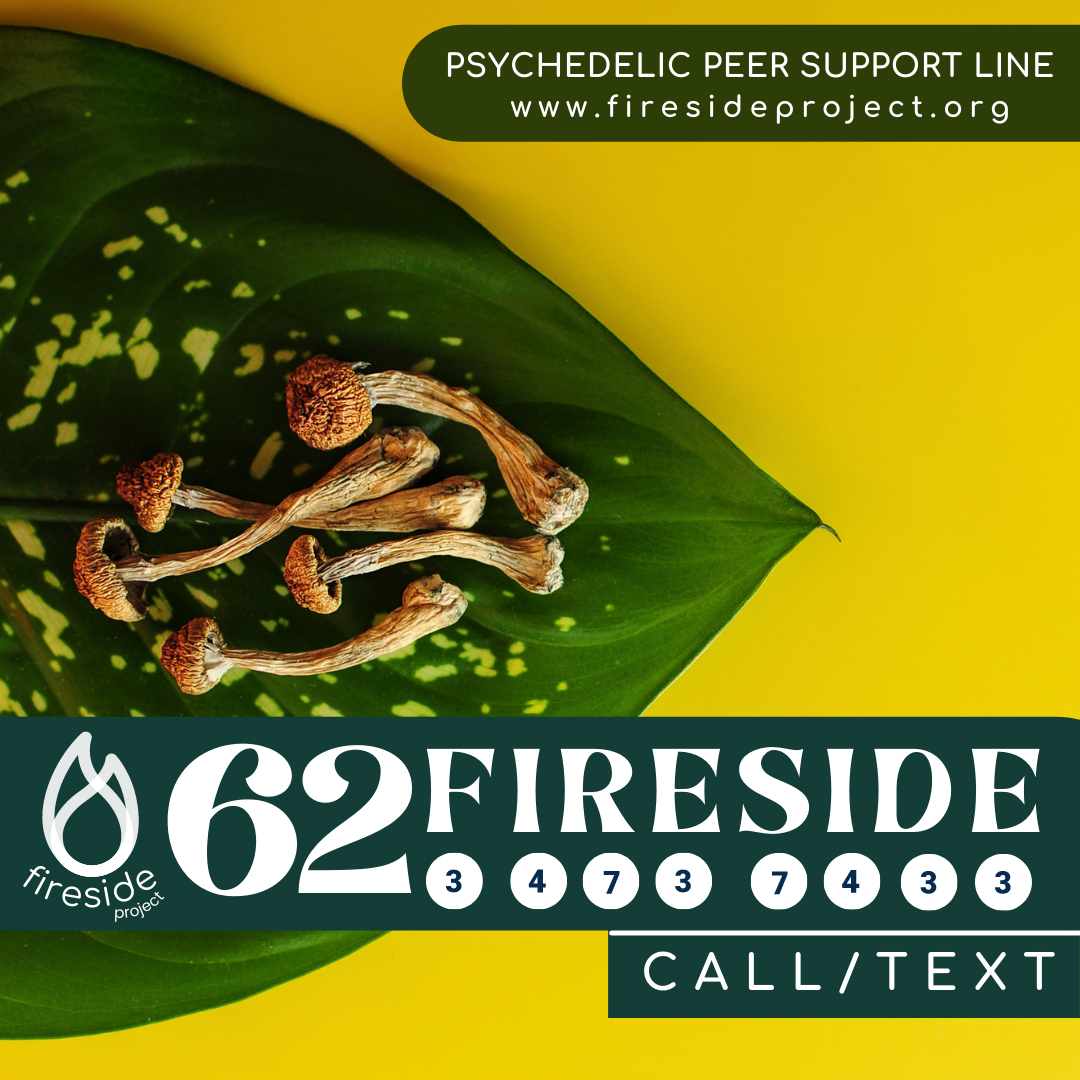 Courtesy of the Fireside Project

Volunteers conclude conversations by offering resources like local integration circles and a list of psychedelic-friendly licensed professionals, or by connecting callers in dire straits to crisis counselors and mobile response teams. (That is rarely necessary, although 25 of the first 78 callers surveyed by Fireside said they might have gone to an emergency room if not for the hotline’s help). As fundraising and volunteer capacity allows, Fireside hopes to begin offering weekly follow-up integration calls or texts for everyone who contacts them.

The growing field of psychedelic medicine has long been overwhelmingly white, with people of color finding it harder to access careers or basic support. Fireside has taken steps to combat this trend, in part by raising money for an equity fund that will one day offer psychedelic education scholarships to hotline volunteers with marginalized identities, including neurodivergent people and those with disabilities. Fireside co-founder Hanifa Nayo Washington, who created her role as the group’s Cultivator of Beloved Community, aims to “hold the equity lens” to every aspect of the project, from its hiring process to social media messaging. She ensured the volunteers’ resource database included BIPOC-specific support and formed partnerships to promote the hotline in communities of color.

“A lot of my trauma and internalized oppression had taken me out of my body,” says Washington. “Psychedelics put me back in my body and reminded me that it’s connected to something greater that’s centered in love. My practice is finding my way back to that mind-state without being ‘on’ something.” To that end, she says, “the integration process is huge.” She hopes the hotline will help more people of color to experience that kind of healing.

As the hotline’s pilot year continues, Fireside is working to make its services available to hospitals, clinics, shelters, colleges, cities, and national support lines like the Crisis Text Line, which since 2013 has allowed people to get help with mental health crises via text. “With decriminalization there’s more access, so you have to think about risk reduction,” says Washington. “We want to position ourselves to say, ‘Hey, we’re here, and this is what a service can look like. Use us!’” MAPS is pioneering a collaboration with the city of Denver (which decriminalized psilocybin mushrooms in 2019) to inform municipal department heads on the needs of psychedelic-consuming constituents, which could include resources like Fireside. Volunteer supervisor Angela Carter, meanwhile, serves on Oregon’s Psilocybin Advisory Board, which is helping the state health authority implement its groundbreaking psilocybin services program.

For as long as people have been taking psychedelics, says Rubin, they’ve been having challenging or even “shattering” experiences. But due to the stigma around these drugs, a resource like Fireside wasn’t possible. With wider attention paid to research and therapy, psychedelics are gaining mainstream acceptance. Now “it’s safe to create more safety,” Rubin says with a chuckle.

Though hopeful, Carter does fear the corporatization of psychedelics could taint the dynamics of a “mystical and ineffable” experience. Serving on Oregon’s board, they aim to promote psilocybin safety in ways that protect the beauty and creativity of existing support communities. As a free resource, Fireside strikes Carter as the type of effort that can keep psychedelic healing accessible in a post-legalization future.

Carter’s call with Shawn lasted more than three hours. Throughout their meandering conversation, Carter interspersed “physical check-ins” to connect Shawn with his surroundings and bodily needs. Twenty minutes before the end of Carter’s shift, they warned Shawn their time together was limited and offered tips for falling asleep, but Shawn knew he couldn’t sleep yet. “He was having revelation after revelation of, ‘my body is so wise. It’s telling me all these things it needs and I just need to listen,’” Carter recalls. Shawn was still scared to be alone, but by the end of the call, felt confident he could handle it. Carter hung up feeling accomplished: “It was lovely to hear him recognize his own ability to steer the ship that was his mind.”

Correction: This article previously stated that MAPS was a sponsor of the Psychedelic Peer Support Line. It is not.