Canadian Dispensaries Selling Pot Even Though It's Illegal - Rolling Stone
×

Walk down Queen Street West, one of Toronto’s cooler shopping districts, and you’ll find something new amid the designer boutiques and H&Ms: stores selling marijuana. The quality of these places varies widely, from unfinished rooms where weed is sold from folding tables, to chic storefronts with the sleek modernity of an Apple store. Whether they advertise themselves as medicinal or recreational, these shops all have one thing in common: as of now, they’re completely illegal.

On a recent afternoon, a polite young woman who answered the phone at one Toronto dispensary told Rolling Stone that no prescription was needed to come in and purchase marijuana. When asked if this was legal, she gave a long, regretful “No,” before explaining that shops like hers were “peacefully breaking the law.” When asked if she wanted to discuss further in a formal interview, she hung up the phone.

Visiting the dispensaries open now in Toronto, Canada’s most populous city, can be confusing for everyone involved. One Canadian who asked to remain anonymous said that before being allowed to actually buy pot, he was given a form to fill out which asked for his personal information, medical need for cannabis, and a signature. After completing it, he watched it get fed it directly into a paper shredder. Another Canadian visited a recently opened dispensary with a well-built friend who vaguely looked like a cop. When they asked if they could buy marijuana and then left without actually purchasing anything, the spooked staffers shut down for the rest of the day.

Canada's Legal Weed: What You Need to Know

The rise of illicit marijuana dispensaries around the country is one of many side effects of the confusing legal status of pot in Canada today. Its legalization was a major campaign issue of Prime Minister Justin Trudeau’s Liberal Party in the general election of 2016. In April 2017, Trudeau announced in that marijuana would become legal in July 2018. While the federal government has set some rules, much of the on-the-ground implementation is falling to local governments. After speaking with officials from around the country, a picture emerges of lawmakers with different priorities, different views of the value of marijuana and a general reluctance toward legalization. Yet they’re all scrambling to figure out a way to regulate the growth, distribution and sale of marijuana in barely a year – and the often very strict rules they’re creating are building a paradoxical system where legalizing pot may lead to even more arrests than today.

Canada has a strange relationship with intoxicants. For most of the Twentieth Century, the distribution and sale of alcohol was totally controlled by government agencies in each of the country’s ten provinces. These bodies set strict rules on what alcohol could be sold where, with several provinces making government-owned stores the only businesses that could legally sell. Today, most provinces have a patchwork system where government-owned stores sell all types of alcohol, and some private shops sell a limited selection of beer and wine. These rules have relaxed at different paces around the county. Ontario didn’t begin allowing beer and wine in private grocery stores until 2015.

“It was very much like a shaming, trying to go there,” says Tyler James, a Torontonian and the director of community outreach at cannabis dispensary Eden. “You’d have to get a piece of paper and a card, write down what you wanted on the card, and give it to an attendant, who walks into the back and brings you the bottle.” 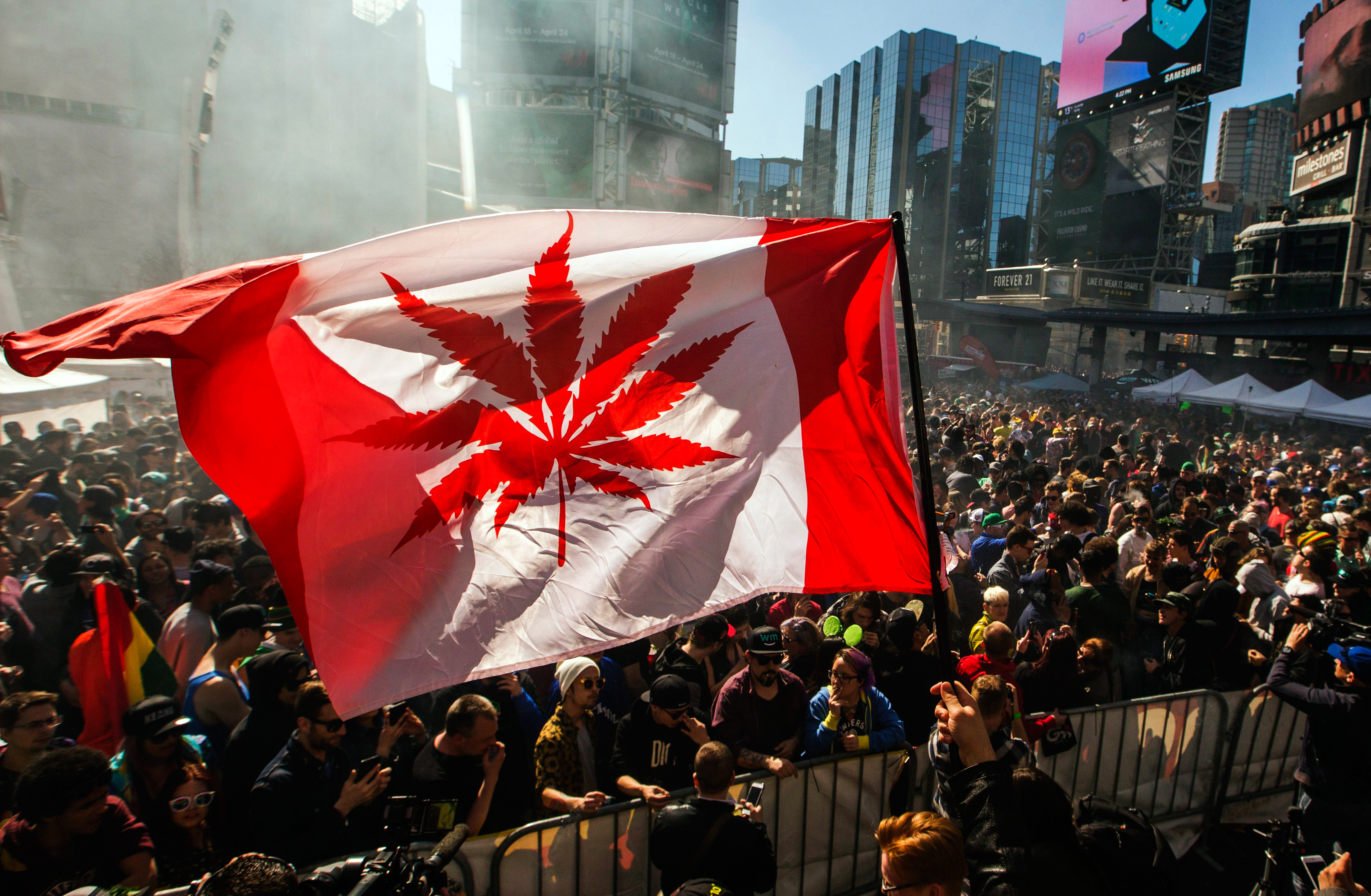 The majority of provinces are actively exploring a similar retail model for marijuana. Though most are still researching and consulting with citizens and have yet to make a decision, Ontario has formally proposed that weed only be sold through government-owned retail storefronts. It has said it will establish 150 locations by 2020; Colorado, which has less than half of Ontario’s population, currently has more than 800. According to draft legislation, companies selling marijuana outside this system will be subject to fines of up to $250,000, and individuals of up to $100,000 and one year in jail.

Generally, marijuana enforcement is not the priority in Canada that it is in the United States. In 2015, the US had roughly three times more pot arrests per capita than Canada, according to a report from the American Civil Liberties Union and Human Rights Watch.

Still, Canada’s slow legalization of cannabis has been as cautious as its approach to alcohol. While medical marijuana was legalized in 2001, patients were required to grow their own or designate another individual to grow it for them. After a legal challenge in 2013, this was broadened to create a system that included federally licensed industrial-scale producers. This system, called Marihuana for Medical Purposes Regulations, or MMPR, was again challenged in 2016. The ruling in that case, commonly referred to as Allard, scrapped the MMPR system on the grounds that it unreasonably limited access and increased costs, and gave Canada six months to make a new one. While it didn’t explicitly call for the creation of dispensaries, it did say that “dispensaries are at the heart of cannabis access.”

This ruling encouraged the idea that a dispensary could operate as long as it was strictly for medical reasons, even if they remained technically illegal. Following the announcement that legalization was coming in 2018, many existing operators felt they could drop the pretext that they were medical facilities at all, and many others jumped in, despite the fact that no laws had actually changed. Still, many thought, even if they were shut down and arrested, how could they be convicted for selling something that would be legal by the time their case came to trial?

“I’ll be real clear with you: that’s their position, but that is not the law,” says Tracey Cook, executive director of Municipal Licensing and Standards in Toronto. “They are not, not, not in any way shape or form permitted to operate storefronts, even for medicinal [marijuana].” Cook, a tough but affable former police officer, is in charge of a variety of issues that most directly impact the day-to-day life of Torontonians. She’s credited with winning a fight against the city’s taxi union to allow Uber to continue operating there and, along with the police, has been leading the fight against dispensaries. So far, that’s had inconclusive results.

Cook’s office orchestrated a massive raid of the Canna Clinic chain of dispensaries in late June, eventually charging 90 people with more than 180 offences, from possession of cannabis to “possession of the proceeds of crime.” In early July, it was announced that the vast majority of those arrested wouldn’t go to trial. Other Toronto raids from September and early December have been smaller in scope, with as many as 15 arrests or as few as five.

Though similar raids have happened across Canada, many officials around the country see legalization as a chance for fewer, not more, arrests. “The main goals [of legalization] are that the end purchaser shouldn’t end up in the criminal justice system, because that doesn’t increase public safety,” says Alberta’s Minister of Justice and Solicitor General Kathleen Ganley.

Keeping Canada’s marijuana users on the right side of the law is more difficult than it sounds. Legalization is creating many additional laws as the government tries to regulate all aspects of the growth and sale of pot.

“It’s been a gold rush, and now the government is trying to regulate a gold rush,” says Mike Farnworth, Minister of Public Safety and Solicitor General of British Columbia. “It’s very complicated, on a tight timeline, and involves a lot of competing interests.” 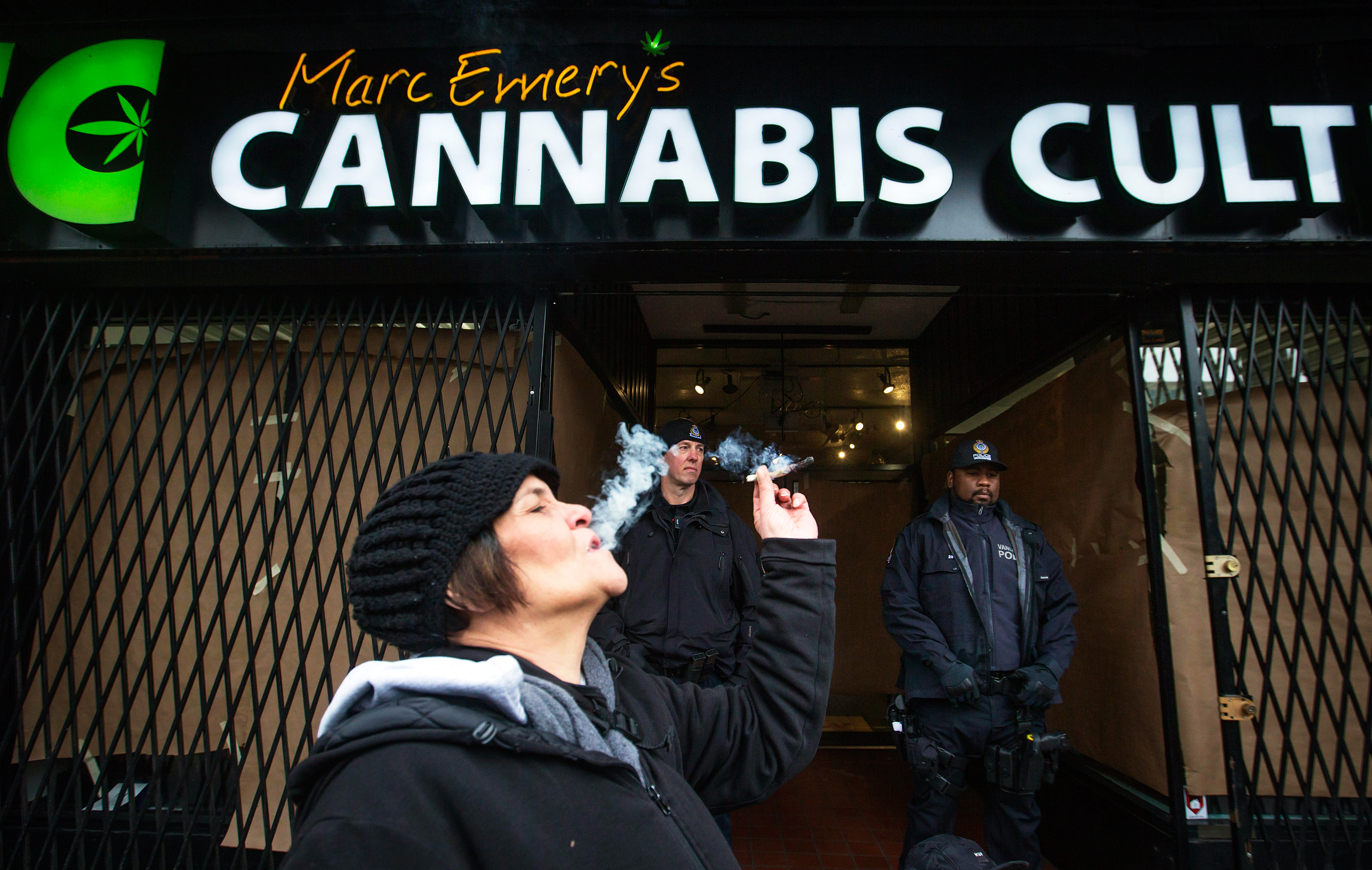 In July of 2018, when marijuana is scheduled to become legal across the country, a Canadian won’t be able to do anything she wants with pot.. There will be laws, regulations and guidelines on its production, possession, consumption and cultivation. The federal government has set some minimums, including the legal age at which a person can possess cannabis (18), a number of plants you’re allowed to grow for personal use (four) and the amount of pot you can legally possess (30 grams). Each province has the broad capability to change these rules to make them more strict, as well as the responsibility to oversee the distribution and sale of marijuana within its jurisdiction.

Lawmakers are facing many questions for the first time. If you’re a renter, can a landlord prevent you from growing plants in your apartment? If smoking marijuana is illegal in public, how will people who live in places that prohibit smoking ever consume it? Already, some of the modest proposed federal regulations have fallen away. Originally, there had been a legal height maximum for personal-use plants, but its enforcement, which conjured images of bureaucrats crouched with tape measures in people’s homes, was widely seen as unrealistic.

That’s on a personal level. On a more industrial scale, the federal government is going to be giving out licenses to producers allowing them to grow large amounts of marijuana for the national market.

“Right now there are 58 legal production licenses, and I think 15 in British Columbia,” says Farnworth. “There’s a number of questions we’re waiting on an answer for, such as how are we going to meet demand? Are we going to significantly increase production on existing license holders?” In other words, legalization isn’t going to mean every pot farm in the black or gray market becomes legal overnight.

In the end, there’s a sense that these initial regulations, whatever they may be, are little more than a starting point. “A lot of people think that this will end in July of 2018,” says Farnworth. “It won’t. Government will be dealing with this for years.”

Cook agrees. “It’d be a hell of a lot harder if we just let all the horses out of the barn, realize it’s causing massive public health and public safety issues, and then try to reign it in. That’d be an irresponsible approach.”

In the interim, dispensaries continue to open and be shut down around the county, often with their operators re-opening within days in a new location. Local governments draft legislation they’re not sure will last, or if they could enforce.

As Cook says with a chuckle, “I don’t know where it’s gonna end up.”