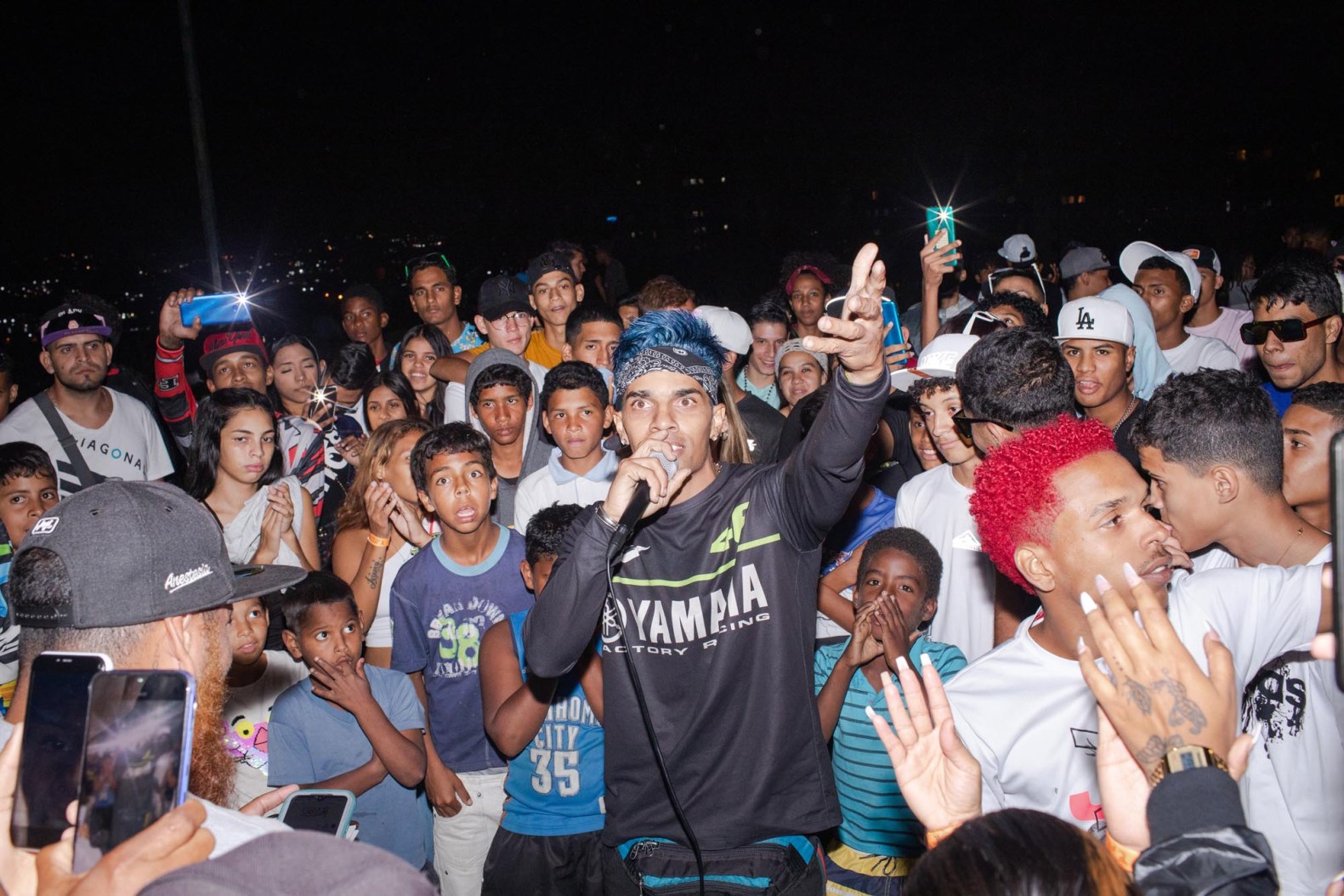 Pedro Aldana began riding motorcycles as a baby. His father would sit him on his lap and they’d cruise through the barrio of Propatria in Caracas together. When he got older, he began careening around on BMX bikes, learning to do wheelies through the chaotic and near-vertical hills of the neighborhood. Soon, he was “borrowing” his dad’s motorcycle at night, and his constant high-speed antics earned him a nickname around town: Pedro Locura. “Crazy Pedro.” Now, when he speeds through Caracas on his teal Yamaha, you can hear people screaming “Pedro Locura!” as he flies by.

Pedro’s love for speed and adrenaline eventually led him to a beloved street sport in Latin America: motorcycle stunt riding, or motopiruetas, as it’s known in Spanish. He’s part of a formidable tradition: Given how omnipresent motorcycles are as a cheap and practical mode of transportation, and because the barrio’s sloping landscapes offer plenty of opportunities for high-risk moves, Venezuelan kids have been innovating the sport for decades.

Like many of them, who ride before they walk, Pedro taught himself the fundamentals early. He mastered the essential caballito, or wheelie. He learned to Superman, a trick where the rider thrusts his feet out behind him while holding the handlebars in mid-air. He’d ride wild distances on one wheel, snaking through chaotic streets and dodging pushcarts, buses, dogs, and kids. He’d leap to a standing position on his seat and then stop the bike on its front wheel, hovering in the air like he had the ability to defy gravity. He started competing on the street for money and other motorcycles, becoming well-known among other riders for his uncanny sense of balance. He started winning so often, it got to a point where nobody wanted to compete against him. Event organizers began to ask him to perform instead.

By his late teens, he was already a legend in the Caracas street bike scene. He printed T-shirts and traveled the country to do tricks for cheering crowds. He even put together a school to teach kids how to do the sport he loved safely. “Better that the kids from the barrios buy a moto than a gun,” he says. “Better gasoline than drugs.”

The motorcycle has been an important symbol in daily Venezuelan life, woven directly into its history. President Hugo Chavez subsidized gasoline and flooded the market with cheap motorcycles during his presidency, making hilltop barrios more accessible and lionizing the image of the “motorizado” (motorcycle rider) as the working man. The vehicle was a family car, a key work tool for thousands of “moto taxistas” and couriers, and often the only way home in barrios built into treacherous hills. But in a nation deeply divided by class, the moto was often associated with crime by wealthier Venezuelans who thought of motorcycle riders as malandros or gangsters. The culture of moto-piruetas has not escaped that association, and it’s often stigmatized and incorrectly painted as only a sport for delinquents who drink and maraude through the neighborhoods on their bikes.

But Pedro, now 35, has worked to shed the sport of its negative connotations. “I’ve fought very hard to get rid of the perspective that motopiruetas are thugs and delinquents… and we’ve made a lot of progress,” he says. “Now people know us and they respect us.”

That journey hasn’t been easy, and it has crosscut the story of a nation that’s fallen into crisis over the last two decades. While making a name for himself, Pedro caught the eye of Chavez himself  — and the late president promised to support bids to nationalize the sport. Pedro’s dreams were unfolding in front of him when Chavez died in 2013, as the country plunged into economic and political chaos.

When he was a child, Pedro loved to take his bicycles and motos apart and put them back together again. He’s had to do the same many times with his career as the convulsions of his country have left his plans in pieces. He’s had to construct a complex business model in order to make a living as a professional stunt rider in a place that has had the the highest inflation rate in the world in the last decade (it has now stabilized to some degree). Market restrictions mean government funding is one of the few ways to sustain a pro-athletic career due to lack of corporate sponsorships opportunities. Following Chavez’s death, some government officials took an interest in Pedro and the idea of making his passion an official national sport. They have been shaken from power, or killed.

Spin Fast: SoulCycle Just Knocked $1,000 Off Its At-Home Exercise Bike for the Holidays

American Music Awards Live Stream: How to Watch the 2022 AMAs Online for Free

Throughout the turmoil, Pedro, and his partner and mentee Anthony Locura have never given up doing what they love. They perform at shows, tour when they can, and work as mechanics when events are dry.

After two years of the pandemic and 20 years of political turmoil, many are looking for stability and a little bit of fun. The markets have somewhat adapted to massive shortages of goods,  and despite profound ongoing political, social and economic problems in Venezuela, some people have a little more money in their pockets. That has allowed the moto-piruetas to start moving paid events again post-pandemic.

Pedro has reopened talks with various government patrons to open up his moto-pirueta school. Over the years, he has also amassed a global social media following, which has helped him supplement his income and helps draw huge crowds wherever he goes.  Anthony Locura used to make a couple of dollars a day as a moto-taxi driver before his pirueta career took off, but he was fired for doing wheelies with customers on his bike. Now, the moto-taxistas are supplementing their income doing food deliveries for apps like Yummy, a GrubHub equivalent, which was unimaginable before. The future of the Locuras, perhaps like the rest of the country, feels as though it’s constantly looking toward prosperity while fearing the instability of the past.

Pedro and Anthony have performed at everything from kids’ birthday parties to presidential palace events. They stay close to the streets, meeting every Sunday at the Cruz del Morro in Petare, the second largest barrio in Latin America, where moto-piruetas from all over Caracas showcase their skills during friendly, informal competitions and practices. Young people from the neighborhoods come out in droves. They listen to reggaeton, electronica, salsa, and Latin trap from parked cars and watch the shows as the riders one up each other with tricks, sometimes with women perched precariously on their bikes for added complexity.

How Kirstie Alley Lost Herself in Scientology

Recently, Pedro and Anthony did things in Petare a little differently. They invited rappers, a group of young dance students, and friends with sound systems. They closed off a nearby entrance and brought in friends to work security, asking for donations at the door. The dancers performed synchronized choreography at sunset, while a group of rappers shared an ode to Caracas and its raw complexities into the night sky. There was a freestyle battle, and then Pedro, who also raps, unveiled a new single he’d been working on.

They also held a BMX wheelie competition for the boys too young to ride motos and awarded prizes to them, which meant the world to young fans who idolize the hometown heroes. Then, Pedro and Anthony performed for the adoring crowd on a mountain top, with a mix of stars and twinkling barrio lights in the backdrop. The money collected from the event went to installing lights in the area. It took days of work to put the whole thing together, and neither rider made money, but it’s another example of how they’ve continued  doing what they love. To them, that’s always been the goal.