In part, the unnerving new documentary Nobody Speak: Trials of the Free Press, is a story of Gawker Media publishing a video of Terry “Hulk Hogan” Bollea, the former pro-wrestler, having sex with Heather Clem, the wife of his once best friend, radio shock jock Bubba the Love Sponge Clem. The documentary describes how Bollea sued Gawker for $140 million in Florida for invasion of privacy, legally pursuing the online news website for over four years until their board filed for bankruptcy, sold to Univision, and reached a $31 million settlement last November.

Director Brian Knappenberger thought the Bollea v. Gawker trial was interesting enough, but he became “earnestly intrigued” once the press revealed that Peter Thiel, a billionaire Silicon Valley venture capitalist, was bankrolling the lawsuit. Thiel’s involvement implied a more serious match was being fought not in a courtroom in Florida, but across the United States.

“You could tell there was some big picture First Amendment and privacy issues,” Knappenberger tells Rolling Stone. “I was on the fence, and then the verdict came down along – with the revelation that Thiel was involved. That, to me, was fascinating. Big money and it’s ability to silence critics. Big money wielding to go after the press.” And then, America elected President Trump – and he knew the film had to take a new direction.

At first, the documentary, which was nominated for a Grand Jury Prize at the Sundance Film Festival in January and debuts on Netflix on June 23rd, introduces audiences to “one of the most important first amendment cases in U.S. history,” as constitutional law expert Floyd Abrams describes it in the film. Knappenberger offers background and explanation through a variety of characters including Gawker founder Nick Denton, Bollea’s lawyer, journalists, and law professors. Bollea and Thiel declined requests to appear on film.

An array of personalities express sympathy for Bollea, like the late New York Times reporter David Carr, who describes Gawker as the high school mean girls. But things get “weirder and weirder” when it turns out Thiel had his own issues with Gawker after it ran a 2007 story, “Peter Thiel is totally gay, people,” and later told the New York Times that he thought backing the lawsuit was “one of the more philanthropic things” that he’s done.

Knappenberger’s point here is that Bollea – who argued that the sex tape violated the rights not of his public persona, but his personal life – tagged in Thiel to help him defeat Gawker, Denton and A.J. Daulerio, the reporter who wrote the story. “Even I had sympathy for Hulk Hogan case, but it was much different once I figured out Thiel was involved,” Knappenberger says. “Gawker may have been annoying, but the idea that they would go bankrupt was absurd.” 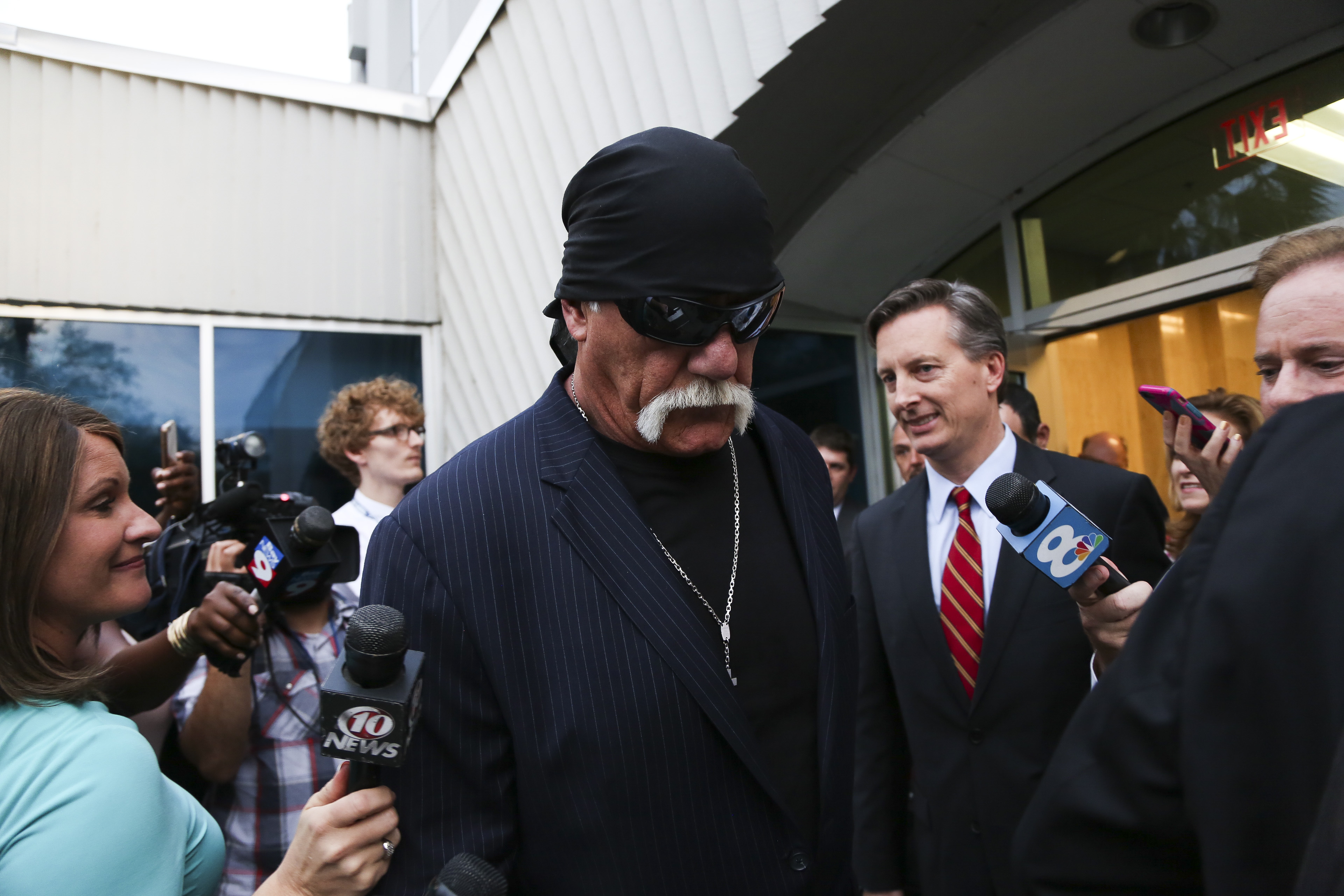 While researching the trial, Knappenberger noticed “an ugly theme of billionaires involved in media” scandals that included casino mogul and GOP donor Sheldon Adelson covertly paying $140 million for the Las Vegas Review-Journal in 2015. Knappenberger found similarities between the trial in Florida and Adelson buying Nevada’s largest newspaper – particularly the presence of “big money and secrecy.”

In one chilling account, former columnist John L. Smith remembers that Adelson sued him over a passage from his 2005 book Sharks in the Desert that mentioned Adelson’s investments in vending machines and the general ties of that trade to organized crime. As Smith tells it on-screen, Adelson sued him for $15 million at a time when his daughter was being treated for brain cancer. Adelson schemed to drop the lawsuit if Smith admitted to libel and paid a dollar judgement. When Smith declined, Adelson made an offer to put $200,000 in an account for the daughter’s medical bills. Smith again refused and instead filed for bankruptcy, before the lawsuit was eventually dismissed with prejudice. “You don’t always recognize heroism when it happens,” NPR reporter David Folkenflik says about Smith during the movie. “But, oh God, what a moment.”

The movie depicts journalists as modern heroes taking on the shady tactics of Thiel and Adelson. But how can the media hold public figures accountable without putting themselves in danger? Knappenberger poses the question in light of President Trump’s ongoing assault on the media. “This film is entirely different than the one we were making 24 hours before Trump got elected,” Knappenberger says. “Before that, we were talking about Trump in a very cautionary way and then suddenly, here he was in charge of the executive branch. That was jarring as a filmmaker.”

For Knappenberger, the movie doesn’t rest on the Bollea v. Gawker trial but, rather, it unravels the idea that journalism is being attacked from every side. “We need to stand up for an independent press and support good journalism,” he says.

Knappenberger knows that the story of big money fighting the press is a familiar one. So why make the film? “Watch what journalism should be doing,” Knappenberger says. “Watch the powerful. Watch big money and the secretive stuff behind the scenes pulling the strings. We’re in this bizarre world now.”