On a cold day in February 2017, New York Governor Andrew Cuomo spent a few minutes before a scheduled appearance at the opening of a new casino in Schenectady bantering with reporters about weed. A lifelong law-and-order Democrat, Cuomo swung to the right of his party when it came to cannabis legalization, and for years, he remained stubbornly dubious about the benefits of medical marijuana, despite significant support from doctors; when he finally signed the Compassionate Care Act into law in the summer of 2014, it was not without reluctance.

But it was three years later, and Cuomo had just approved an expansion of the program to reach even more patients; not to mention, there’d been an undeniable sea change amongst his fellow lawmakers across the country towards total legalization at the state level. Maybe time and experience had made Cuomo more open-minded and New York would be next?

“I don’t support recreational marijuana,” Cuomo said firmly, and then adding with a chuckle, “Apparently you do, which explains some of the stories you’ve been writing.”

He riffed on the same Dad joke a few more times — “It does explain a lot to me!,” “You know the law!” — while summarizing his concerns with full legalization, which at that point had passed in eight states, plus Washington D.C. (That number has increased to 10.)

How Some THC Is Legal -- For Now

“The flip side … is it’s a gateway drug and marijuana leads to other drugs and there’s a lot of proof that’s true,” Cuomo asserted, although there isn’t. “There’s two
sides to the argument.”

Two years later, and everything’s changed. Pushed by primary opponent Cynthia Nixon to finally accept that legalization is inevitable, Cuomo has proposed the “Cannabis Regulation and Taxation Act” (CRTA), which would legalize marijuana for adults over 21, and create an Office of Cannabis Management (OCM) to oversee a new recreational marijuana program, as well as the existing medical program. Cuomo has said that he’d like to see state lawmakers vote on the bill in April, and if passed, it would be effective immediately, with retail sales starting early next year.

Cuomo’s bill expunges criminal records for marijuana offenses that are no longer illegal would automatically be sealed. When you consider that over 700,000 New York City residents, the majority Black and Latino, were arrested for low-level marijuana offenses over the last 20 years, that’s a pretty big deal — as is the bill’s licensing structure, which bans growers from opening or having a majority stake in retail dispensaries. Minority and women-owned small businesses would have priority in obtaining cannabis licenses, and wouldn’t have to compete with a market dominated by “seed to sale,” vertically integrated companies with a lot of capital. Plus, revenue would be generated by taxes on growers and distributors — retailers and consumers wouldn’t be taxed at all.

But that’s not to say there isn’t a growing infrastructure of cannabis companies ready to jump in, as soon as the switch is flipped — already, 10 registered organizations are licensed to grow, distribute and sell medical marijuana in New York, and several have already made significant investments to prepare for recreational sales by snatching up prime real estate in — where else? New York City. 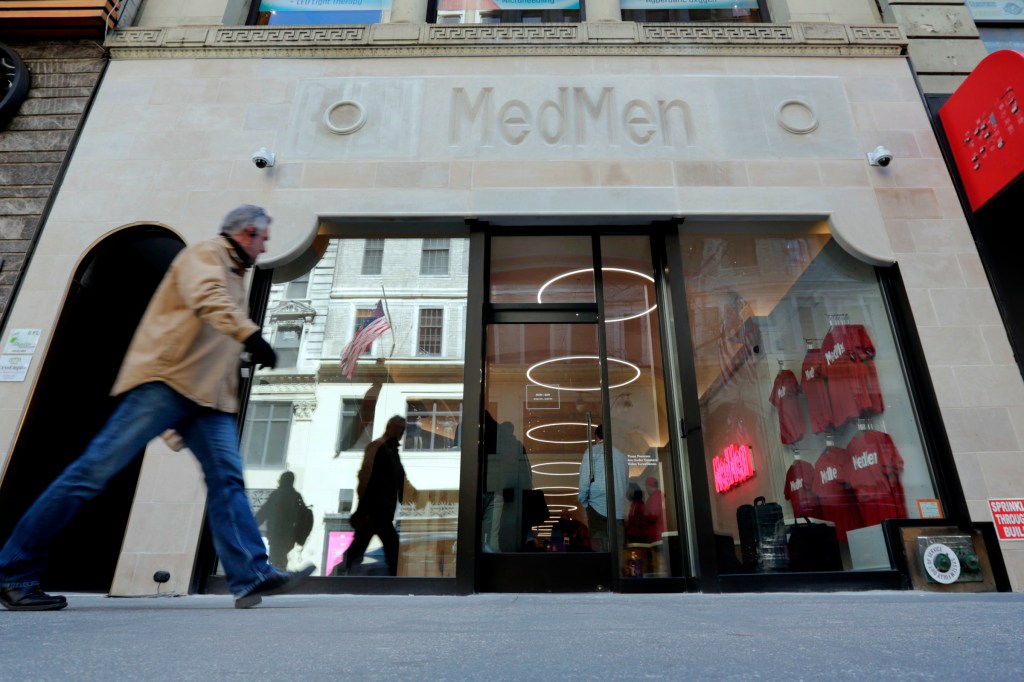 Last April, MedMen Enterprises, a California-based cannabis company, opened New York City’s first dispensary on Fifth Avenue in Manhattan, a prime piece of real estate just steps from the New York Public Library’s stately main branch. The dispensary’s 2,000 square foot open floor plan has a cool, modern Apple Store aesthetic, right down to the touchscreen displays. MedMen considers itself part of the lifestyle and wellness industry, not health care, and they deliberately did not want their dispensaries to feel clinical, or seedy and transactional.

To get their hands on the lease, MedMen — which was founded in 2010 — had to absorb a whole company, Bloomfield Industries, one of the original medical marijuana license holders in New York. Originally approached by Bloomfield to manage their three dispensaries in the state, MedMen learned that their fourth permit was for this much-coveted spot. This was back in early 2017, when Cuomo was still worried about marijuana being a gateway drug; it was perhaps a risky play, but MedMen had a vision.

“From the beginning, our expectation was that New York was going to legalize adult use,” Daniel Yi, communications executive for MedMen, tells Rolling Stone.

There’s a lot of wall space currently going unused at their Manhattan outpost. The walls are covered in equally spaced holes, like a pegboard, and it’s easy to envision them holding shelves stacked with a full range of legal marijuana products, like their dispensaries in California and Nevada.

Across the East River, Citiva opened Brooklyn’s first dispensary on Flatbush Avenue, across the street from Barclays Center, nabbing not one but two neighboring storefronts. Just one of the lots is open to the public for the time being. The other, of course, they intend to use the other when their business expands to include recreational sales.

For now, only the 33,000 New York State residents with medical marijuana cards are allowed to purchase cannabis, which come in the form of vape pens, tinctures and capsules — but no flower. Smokable marijuana is verboten under the current medical program, but would be legal under the proposed CRTA. (The bill otherwise bans home-growing, but it does allow certified patients up to four cannabis plants.)

MedMen and Citiva are both vertically integrated businesses, producing and selling their own cannabis, a structure that the proposed CRTA forbids. Luckily, all that extra real estate won’t go to waste — Cuomo’s bill makes an exception for registered organizations to apply for adult-use retail licenses for the four dispensary locations allowed for each license under the medical program. New cannabis retailers are allowed a maximum of three.

“Keep in mind, this is the first salvo from the governor’s office, and it will probably change a lot between now and when it becomes law,” Yi says. “But we welcome participation by other players. Broad and diverse participation is a good thing for the industry and we’re supportive of creating ownership and career advancement opportunities for people in communities that were impacted by the failed war on drugs. And you will not be able to create more social equity without broadening the field for other other people to participate in.” 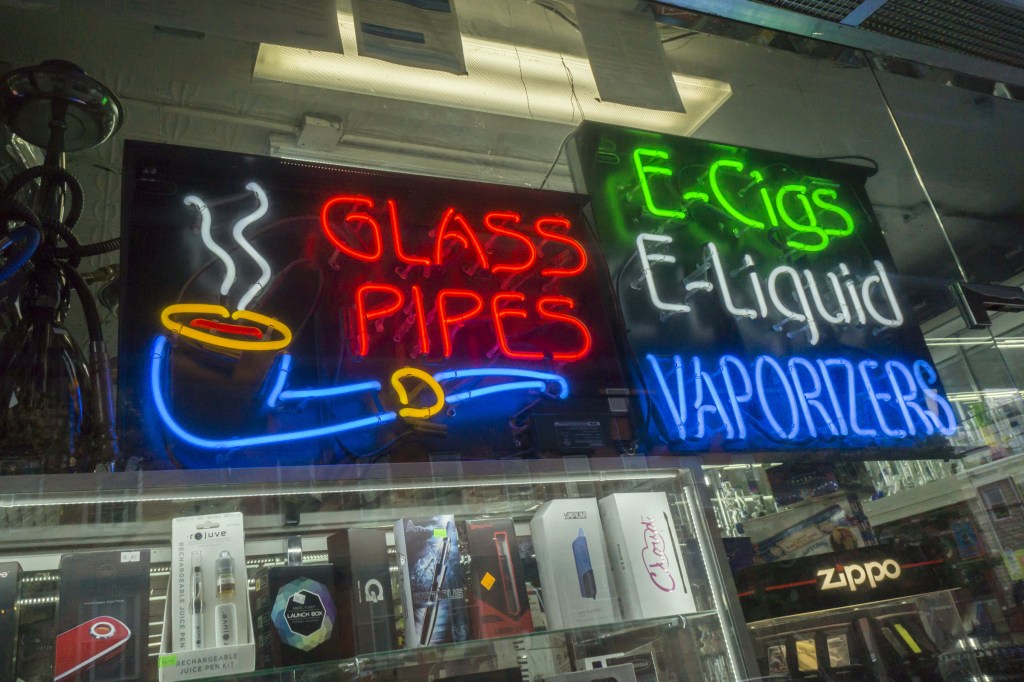 Older head shops, like this one in Williamsburg, Brooklyn, had a decidedly different aesthetic from the new set of stores. Photo credit: © Richard B. Levine/Levine Roberts/Newscom/ZUMA

The fact that, at one point in time, possession of marijuana could be penalized with life in prison. That’s in stark contrast to the post-legalization marketing of marijuana as a mainstream “lifestyle” trend. “Stoner” culture has always existed, of course, and head shops have been selling plastic bongs, grinders, High Times magazine and marijuana-leaf accessories for decades. Many New York City bodegas carry the basics, like one-hitters, mesh screens, and glass pipes, all sold under the guise of being for — wink — tobacco use.

But the shady veil has been lifted.

“New York, as a market for cannabis consumption, is probably one of the most sophisticated retail environments in the world,” says Sasha Kadey, Chief Marketing Officer for Greenlane, the distribution company behind the California-based brand Higher Standards. Higher Standards opened its flagship retail store in Manhattan in late 2017.

Nestled between Anthropologie and Fat Witch Bakery inside Chelsea Market, Higher Standards, with its cement floors, brick walls and high ceilings, looks more like a home decor boutique than a smoke shop. If Nancy Meyers were to direct a stoner comedy, Higher Standards is where Meryl Streep’s character would knock out all her holiday shopping — there are Forestry Wool throws, Malin & Goetz scented candles, a curated selection of vintage designer lighters, and the LEVO oil infuser, perfect for making homemade cannabis butter scones on Christmas morning. The store is stocked with items meant to “appeal to a connoisseur who likes the finer things in life,” including their own line of upscale care and maintenance tools, designed to leave smoking accessories clean and functioning at their best for maximum potency and, most importantly, flavor.

“People pay top dollar for their dry herb or concentrate, and then they might go home and smoke it out of a dirty pipe,” says Kadey. “That’s akin to buying a really nice steak or a really nice piece of fish and eating it off of a dirty plate or cooking it in a dirty pan – you shouldn’t be paying hard earned money for flavor only to mute it by smoking it out of something dirty.”

Greenlane, the brand’s parent company, does most of its business supplying smoke shops with the latest and greatest smoking and vaping accoutrement; the company got its start in 2005 with an initial focus on the Volcano vaporizer, which at that time still had no e-commerce or distribution model. Their business quickly expanded to include other premium smoking and vaping brands, which they distribute to mostly independent smoke shops, head shops and dispensaries at wholesale prices.

“Greenlane had done a lot of research into how to stay competitive as states legalize marijuana and the level of sophistication of the marketplace increases,” Kadey explains to Rolling Stone. “I think the biggest challenge a market like New York is going to have is enabling dispensaries to offer a competitive enough collection of all the different product categories — you’ve already got your choice of [black market] delivery services that’ll show up at your door with dozens of different strains and product available. What’s going to make consumers say, ‘Man, I’m going to be better off going into a dispensary than I am sticking with my delivery service’?”

Higher Standards business model has never involved marijuana itself, but that too could change once adult-use is legalized — like MedMen and Citiva, the company has a killer location and plenty of extra product space.

“We feel the store provides the optimal model for that, if you just add a couple dispensary counters at the back,” Kadey says. “I suspect there will still be a lot of red tape around what you can do and where you can do it, so it’s by no means a foregone conclusion. But should all of the stars align for us, it would have to be a dream come true.”