New Jersey’s Meadowlands is home to toxic waste, rumored bodies of dead mobsters, and, now, The American Dream — a three million square foot palace to shopping, dining and indoor entertainment. From the highway, it looks a like an airport mated with a waterslide: bright plastic tubes burst from its white façade at odd intervals, while its great glass atrium houses a garden of synthetic delights.

Pearl Gabel and Megan Coyne, the two women behind New Jersey’s official Twitter account, @NJGov, are standing in the guts of that glass belly — a massive indoor waterpark. We’re getting a guided tour of the new East Rutherford complex, which currently boasts an indoor skating rink, amusement park, and even an indoor ski mountain, where Meek Mill has been seen shredding. We’re escorted by a square-jawed security guard and a peppy Dream representative, Brian Hague, who’s scored us entrance to the DreamWorks Water Park, where we stand by the poolside swim-up bar. The park won’t open until 2020 — as will the majority of the mall, including shopping and dining. For now, though, the biggest indoor wave pool in the world sits placid under the looming visage of Shrek and his giant toilet — itself a flushable waterslide.

Not unlike this oversized monument to commerce and all-in-one family entertainment, the twitter account Gabel and Coyne run represents the side of the state that is brash, proud, and unashamedly weird. And they’re both looking to instill pride in its residents: @NJGov with quippy, viral tweets about pumping gas and being “hongie” for bagels; the American Dream by boasting a dizzying array of amusements, not to mention close to 17,000 possible jobs. They’re both also decidedly underdogs: @NJGov because they’re a modest Twitter account trying to own the identity of what others consider “The Armpit of America,” and the Dream because, well, it’s a massive shopping complex that’s opening during a time when American brick-and-mortar retail is on a decided downswing.

The Dream, which was built on a former swamp, has been more than 15 years in the making, according to Hague. It was conceptualized first in 1996 as a complex called Xanadu (as in where Kubla Khan decreed a “stately pleasure-dome”). Construction started in 2004, then stalled out during the recession in 2009. Two years later, Triple Five Group, which also owns Minneapolis’ Mall of America, took over the project, renamed it, and set a projected opening in 2013; doors officially opened on October 25th, 2019. Still, they predict 40 million visitors per year — despite the fact that the complex is located in Bergen County, whose Blue Laws prohibit retail shopping on Sundays. 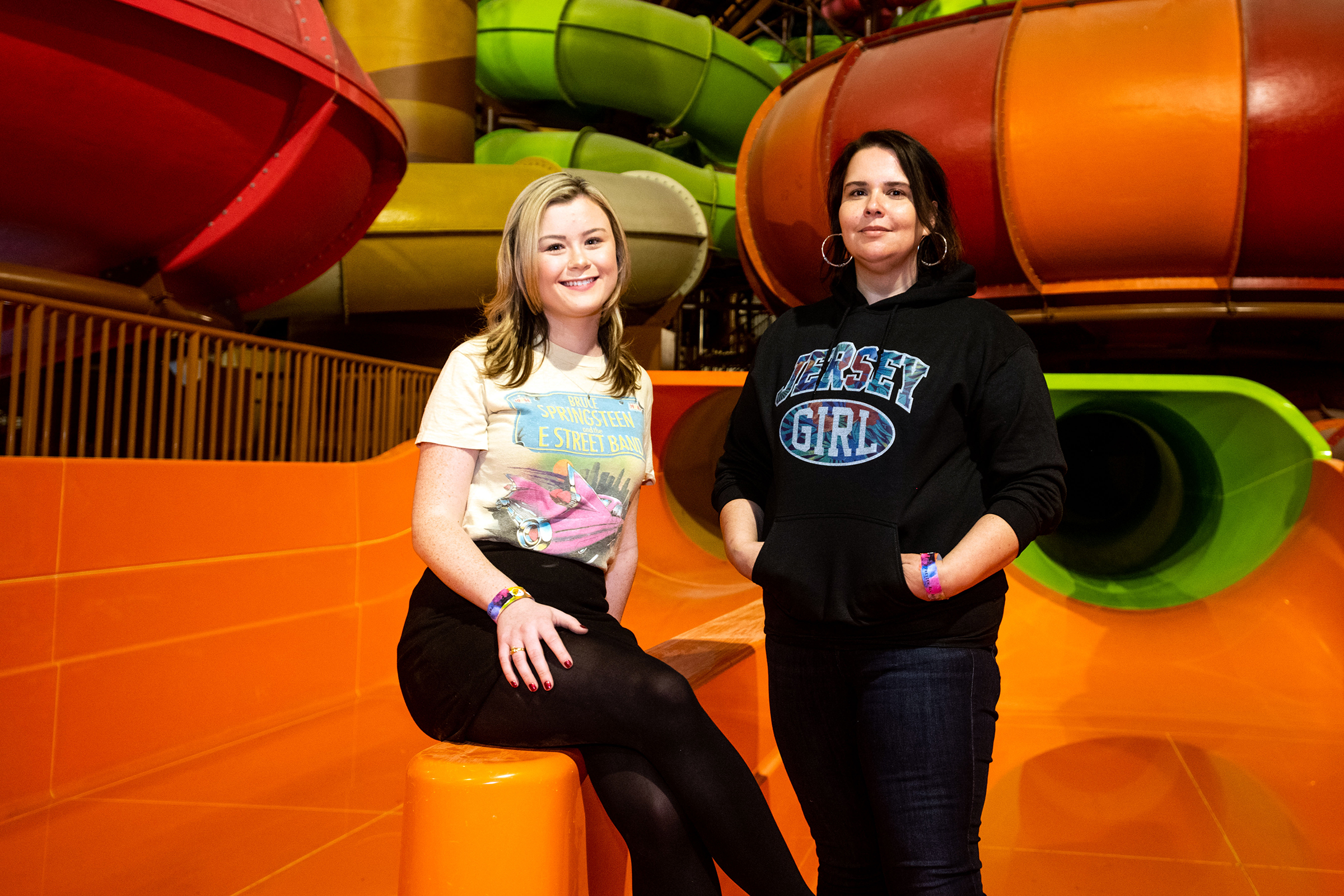 Megan Coyne and Pearl Gabel, who run the official Twitter account for New Jersey, at the American Dream complex. Photograph by Nick Karp for Rolling Stone

The Twitter account, one could say, has had a similarly storied past. It’s a mingling of the personalities of Gabel, digital director for Governor Phil Murphy, and Coyne, the digital assistant. Hailing from Little Silver, a borough of Monmouth County that boasts highly rated public schools, Gabel decamped to New York for a decade — working as a photojournalist for the Daily News, New York Times, and Wall Street Journal — before taking on her current position in January 2018. She settled in Lambertville, a charming little town on the banks of the Delaware River bursting with antiques and crafts.

“I cut my teeth in New York,” Gabel says. “But New Jersey is comfort, it’s home. But New Jersey is misunderstood. It’s got the energy; it’s got the competitiveness. It made me into who I am.” Gabel was bullied growing up (“I was a fat kid. I was kind of weird. I was marginalized.”)

Coyne grew up in Livingston, in northern New Jersey, and has never lived outside the state. She’s worn a necklace featuring a silver charm of Jersey for the last seven years — a bauble she got in high school when she really began to feel a kinship with her home state. “I had a teacher who also loved New Jersey,” she says. “In my high school, everyone talks about how they want to leave. He would always talk about why you should consider staying.”

Coyne started interning for the Governor in 2018; after she graduated from Rutgers University in 2019, she was hired full time. Former Governor Christie cleaned house when he left office in 2018, taking his Twitter account — and nearly a million followers — with him, meaning Gabel started @NJGov from zero. Coyne joined her in the following months. They now have more than 91,000 followers.

At first, their take on Twitter was business as usual, until Gabel decided they needed to humanize the account a bit more. They started tweeting out jokes about how NJ dwellers can’t even imagine pumping their own gas without getting ill (manning the pump is prohibited in Jerz) and how Central Jersey does exist (it’s not just north and south, apparently) — while also keeping residents abreast of local politics, or, as in a few days before our meeting, updates on a terrorist attack in Jersey City.

By couching more important matters in humor, they hoped to more effectively engage with citizens. Still, it wasn’t until early December that a chestnut of a joke set them apart from the pack. According to Gabel, Coyne keeps a pack of tissues on her desk because their antics often make her laugh so hard that she cries — and on that December day, she needed it. Some sulky Twitter user had tweeted at the @NJGov, “Who let New Jersey have a Twitter account,” to which Gabel snarked back at her screen, “Your mom.”

Coyne dug into her tissues while the two deliberated over whether to actually send the missive. (What if the tweeter’s mother was dead?) Still, they decided that it was solid, and since the administration gave them the latitude to do what they wanted on the social platform (“Imagine if you had to put ‘your mom’ through policy and legal,” muses Gabel), they let the hammer fall.

Back at the Dream, Gabel and Coyne are exploring Nickelodeon Universe, an indoor theme park that resembles a toddler’s toy box come to life, if the toddler lived in an industrial warehouse. The iconic orange blimp sails over the rides — from a giant Spongebob swing shaped like an octopus to a Blue’s Clues carousel — while neon green and orange rollercoasters snake overhead like radioactive vines. The Ninja Turtle-themed Shellraiser, with its 14-second hang over the world’s steepest drop, even makes Governor Murphy sick to his stomach. Despite the fact that it’s a Sunday evening, the park is teeming with kids clamoring for the chance to experience simulated terror at the hands of their favorite cartoon characters.

As Gabel and Coyne wander through the park, they reflect on what purpose their account serves. It’s not meant to draw new residents or visitors to New Jersey, they say. “Our strategy is solely to engage with the people who are here,” Gabel explains, describing locals as “confident, bold and a little bit brash.”

“We do see that people are coming to New Jersey already,” she adds as the duo board the Rugrats Reptar Go-Round, a carousel outfitted with the titular lizard. “Our film industry is taking off; our tech industry is taking off.” A few dazed toddlers watch the scene unfold from a Paw Patrol-themed Ferris wheel. Still, if people want to move to Jersey due to the Twitter account, she’s game. “Come on in,” she says.

According to the Governor, the account is meant to galvanize young people, to get them to engage in their communities. “This is a way we think we could draw people in,” he tells me over the phone, a few days before our excursion. Once they’re hooked on the jokes and memes, he says, the government can hammer home more important issues, like voting and healthcare. “I love it at both levels,” he said. “One is that it’s a reflection of who we are. And two, I think it’s a great way to engage not only, but in particular, young people.”

The Dream also hopes to draw in Jersey residents — first with its theme parks and diversions, then with its shopping and dining. According to Hague, more than 50% of the mall will be dedicated to entertainment. They’re also hoping to add a hotel to incentivize visitors to stay in New Jersey rather than New York; Hague says they’re zoned for 3,500 hotel rooms, but plans for that construction aren’t solidified yet. 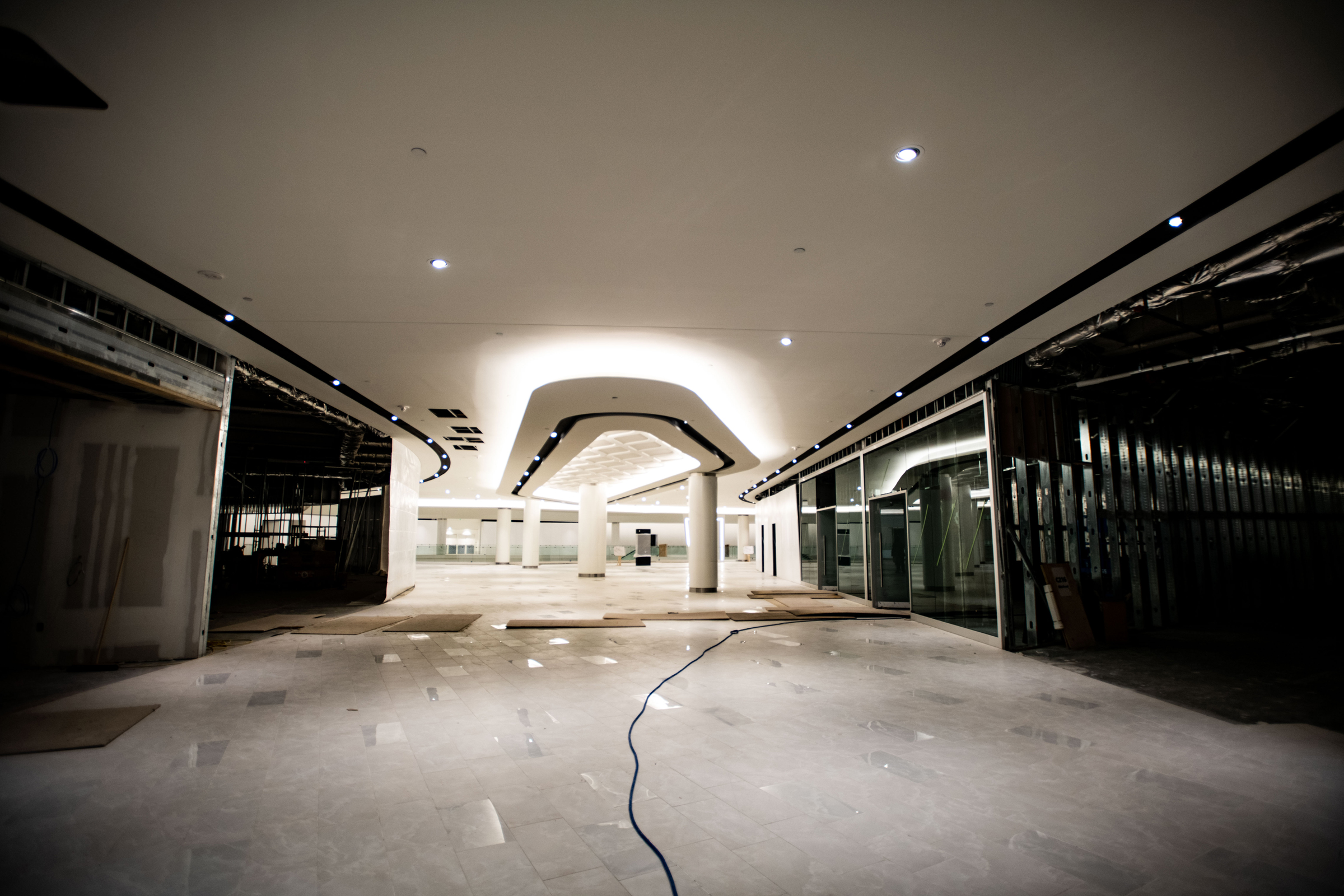 Rounding out our tour of the dream, Gabel and Coyne stand on a balcony overlooking the ice-skating rink, watching as kids in puffer jackets and hats swirl on pure white ice emblazoned with the words “American Dream,” ruminating on New Jersey’s myriad misconceptions. “Dirty, stinky, armpitty,” Gabel lists the adjectives that some may attribute to her home state. “If you’re thinking of New Jersey as nasty and smelly, you’re thinking of a tiny portion of it. We own it, though.”

“We’re owning this brand that New Jersey already has,” Coyne adds. “If you embrace something you can reclaim it for yourself and people can’t make fun of you if you take ownership. So it’s like, ‘You can call us an armpit. Armpits are great! Armpits very important!’”

“Yeah! They let the toxins out. They’re crucial,” Gabel agrees.

The tour ends with an amble down an unfinished hallway leading toward the parking lot; Hague explains how the guts are always shifting and changing. During past tours, folks have turned back the way they came only to find that builders had already boarded up that entrance. Despite all the activity at the amusement park and on the slopes, these plywood hallways stand as a reminder of just how far the Dream has to go before it’s fully intact — and, also, how New Jersey itself is an ever-changing entity, never quite able to be pinned down.