Just before 11 a.m. Eastern Time yesterday, about 40 people spread across five cities – Seattle, New York, San Francisco, Cleveland and Los Angeles – arrived at their predetermined spots to pull off an artistic protest of the Republican presidential nominee that would shock, horrify and endlessly amuse the general public. They’d practiced exactly what to do. Some of the crew would be on documentation, from installation to reaction to the inevitable moment when cops would come and attempt to drag the giant, naked statues of Donald Trump away, while others were ready to actually erect the grotesque entity. At exactly 11 in each city – 8 a.m. on the West Coast – two people dressed as construction workers carried out a 6-foot-5, 80-pound object under a blue tarp, brushed away detritus from the ground, spread a thin layer of fast-acting, industrial-strength epoxy, held the object upright for a matter of seconds, and walked away, disappearing into the gathering crowds.

Across the country, the protest went off without a hitch. “The one thing I knew we could count on was that once the tarp came off, it would create so much mayhem that the easiest part was actually going to be walking away,” says a spokesperson for Indecline, the anarchist collective behind the statues, an effort they titled “The Emperor Has No Balls.” His phone is buzzing continuously; he’s been inundated with interview requests since it came out that his crew was behind the statues. In the 15 years they’ve been active, the Indecline crew has mostly stuck to graffiti and murals – like one last fall where they painted “Rape Trump” on a fence at the U.S.-Mexico border following his comments about immigrants – but this year, as Donald Trump careened from a “laughable piece of shit” (as Indecline puts it) to a terrifyingly real presidential possibility, they knew they had to do something more shocking. So they canceled something they had planned in Flint, Michigan, in protest of the town’s elevated lead levels, instead focusing on a country-wide anti-Trump action. 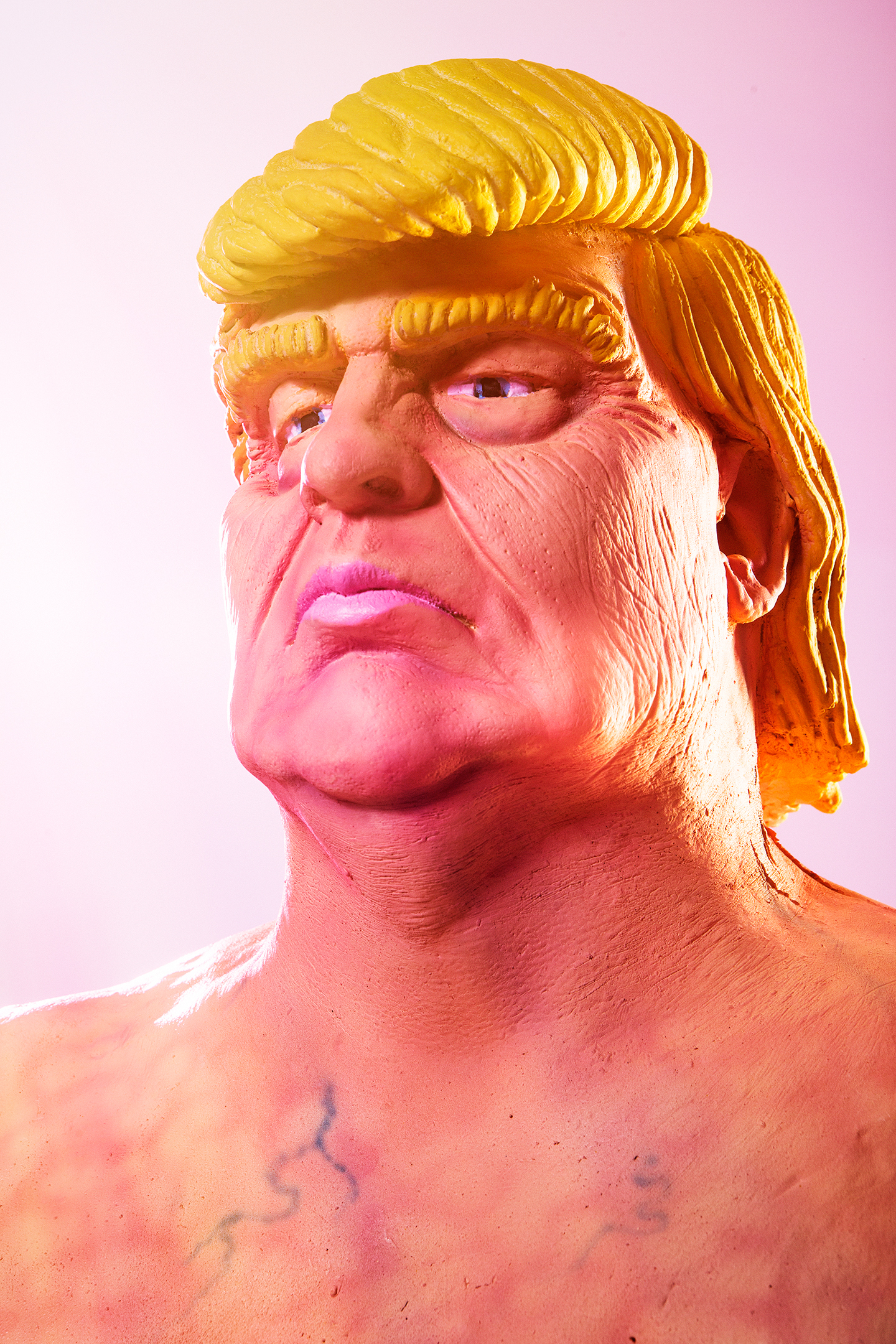 “We started thinking a lot about how dictators and tyrants, all though history, were memorialized through statues,” says the spokesperson, who asked not to be identified as to protect himself against potential legal action. “Go to any major park in America, you’ve got some rich white general with a sword. That guy was probably a complete piece of shit back in the day. All the way from Caligula to Lenin, it was always about the statue. And Trump just fit that perfectly.”

Naked, obviously, seemed like the way to go. They’d seen how Illma Gore‘s infamous colored pencil drawing of Trump had gotten enough attention to ignite a small firestorm, even getting the artist assaulted for her work. “We talked about her a lot during the processes, just because of how innocent that whole piece of artwork was, and so much came of it,” says the spokesperson. “That was a piece of paper and some colored pencil – and this was five statues in five cities.”

Eventually, they found a Las Vegas–based horror artist named Ginger, and as soon as they saw his work – like growling werewolf costumes and lifelike silicon masks – they knew they could pull it off. “We were like, ‘You’re the monster guy and Trump’s a monster, so you’re gonna crush this,'” says the spokesperson. Born in 1980, Ginger likes to tell a story of how, as he was being delivered by C-section, he stuck his hand out of his mother’s torso, causing a nurse to faint. After an uncle showed him Poltergeist at age four, he became obsessed with the horror genre, his high school heroes savage characters like Freddie Kreuger and Jason Voorhees. “My parents thought I was going to grow up to be either an artist or a serial killer,” he says. Luckily, he went the former route, finding a career in major-scale haunted houses like Eli Roth’s short-lived Vegas Goreatorium. It was exactly the sort of background the Indecline crew was looking for.

Though Ginger had initially been contemplating voting for the Orange Menace himself – a decision he has since changed after looking more deeply into Trump’s past, not to mention staring at his gruesome face for months – he decided to take on the challenge. He was familiar with an action Indecline had done a few years earlier, scrawling the words “dying for work” on an unused Vegas billboard and hanging a mannequin in a business suit from it in a noose, which he found to be particularly poignant. 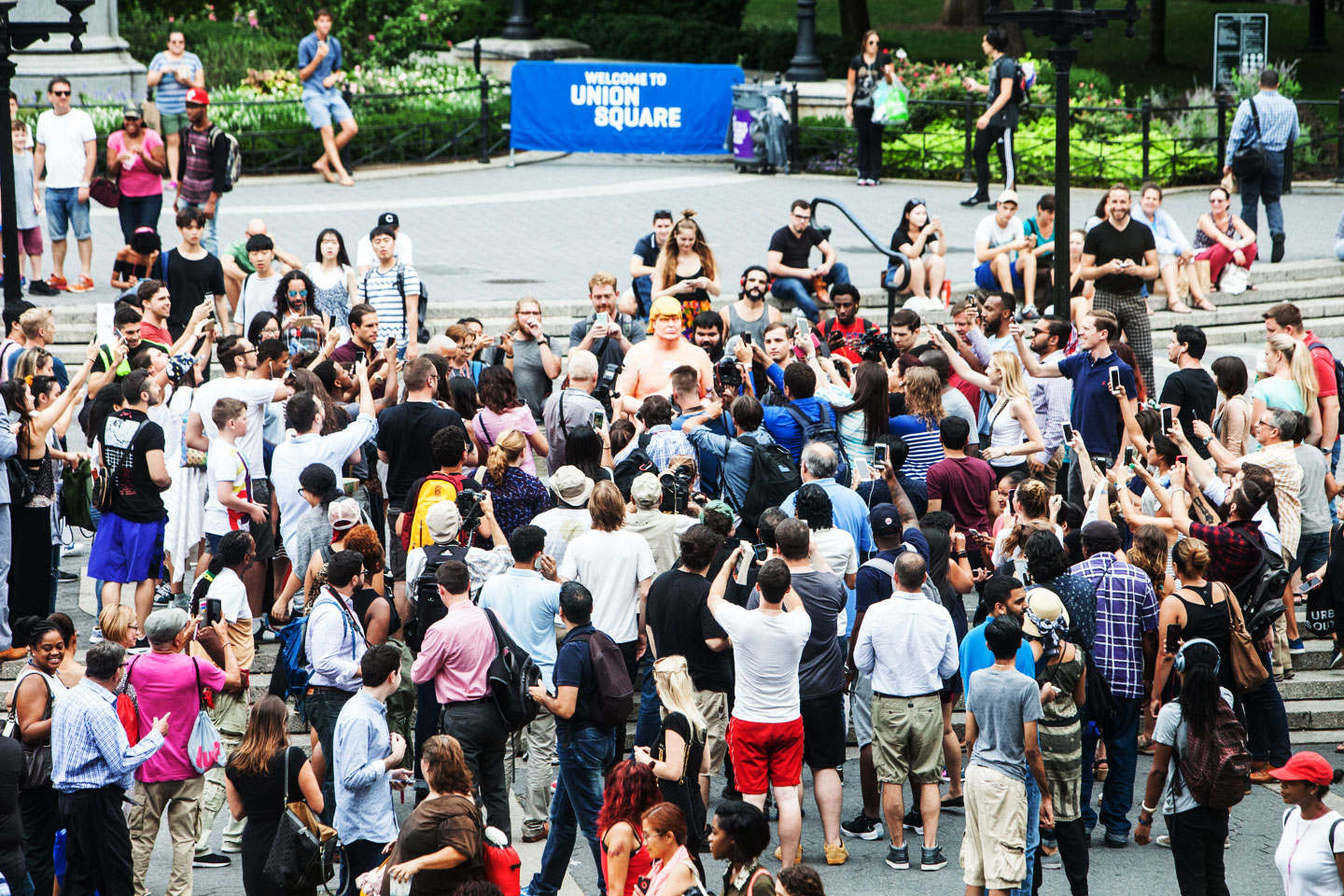 Ginger says they approached him with a very specific set of requirements: “They wanted it to be lifelike, but a little bit bigger than normal,” he tells Rolling Stone from his home in Nevada. “It, of course, had to have no testicles. They wanted him to have a very small manhood, and they wanted it to look like something that a president would have sculpted.” Using a Trump bobble-head as a reference – and a six-foot-five friend as a model – Ginger ran with it, incorporating some of his own touches, like the “droopy old-man butt” and a masonic ring to symbolize the kind of power and connections one must have to achieve the presidency.

When the Indecline spokesperson visited a few weeks into the project to document the process, he knew they were onto something. “He had that look in his eye,” the spokesperson remembers of Ginger. “He knew exactly where he was going with it.” The only intervention came at the end, when they had to decide how to finish the statues. They considered a marble finish, or a patina that would mimic a green, rusting bronze, but that ended up just looking like the Hulk. They made one that surrealistically accentuated Trump’s more recognizable traits – like his bright orange skin – but decided to scale it back to make it as realistic as possible.

Together with New-York based photographer Jason Goodrich, the team photographed the statues in a studio, but it wasn’t until the unveiling that the extent of their realism truly struck the creators. “Ginger pulled out blood vessels and veins to really make it pop,” says the spokesperson. “But to see him against that greenery, the backdrop of Union Square – it was just incredible to see that whole thing come to life.” 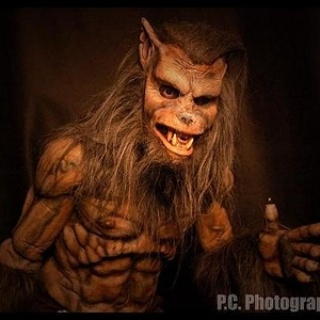 The public, it seems, enjoyed it too. In every city, people swarmed the statues, taking selfies and pontificating to news cameras about how someone could pull off such a feat. In San Francisco, a homeless man fellatiated it, punched it, then apologized. In New York – where a few onlookers mistook it for a very still actor – the parks department tweeted that the agency “stands firmly against any unpermitted erection in city parks, no matter how small,” and the mayor commented on it, saying that he didn’t even like Trump “when he’s wearing clothes.” In L.A., where the statue was placed in front of a Los Feliz gallery, the owner tried to get cops to leave it, then dragged it into his building when they wouldn’t.

Though Indecline don’t have any new actions planned – “I haven’t thought about anything past today,” the spokesperson says – they’re not going to retire the Trump mold yet. They plan to make a few more statues, and this time, perhaps, they’ll have more willing places to put them. “Ginger’s going to make some that aren’t as rough around the edges, really dialed in,” he says. “We’re gonna try and get them into museums, high-end restaurants. Basel already reached out to us, and a couple art galleries in Miami. Maybe some crazy billionaire liberal will wanna buy one from Ginger.” His phone continues to vibrate with more messages. “It’s not gonna end today.”

An artist named “Ginger” has been revealed as the creator behind the nude Donald Trump statues. Watch the creative process behind the statues here.