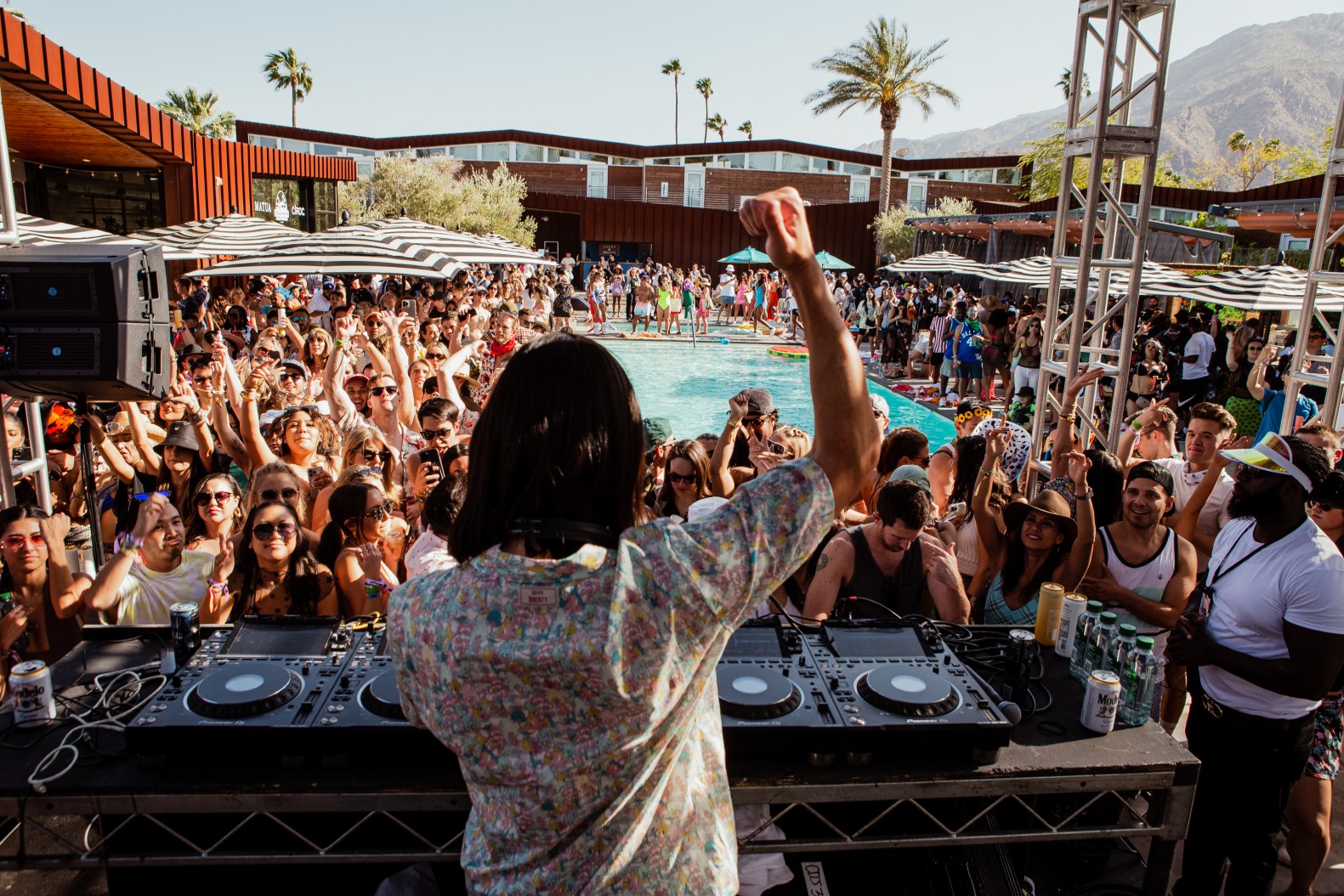 At the Arrive Hotel in Palm Springs, producer James Hype laid down a thumping, electronic version of the Mamas & the Papas’ “California Dreamin’.” The track was the perfect backdrop for the latest iteration of Rolling Stone Live at Coachella, an electric day party that was presented by Meta and anchored by a lineup of rising stars, including Grace McKagan, carwash, Blxst, and Gryffin.

Nestled within the sprawling pool party was the second leg of Rolling Stone and Meta’s Creator House series, a multi-sensory experience where guests got a glimpse of the future with fresh tech designed for digital movers-and-shakers.

The event stayed true to its name with Meta activations that allowed creators to bring their followers along for the fun, including an Instagram Remix Reels studio. Attendees entered the booth and chose from one of six reels to remix, creating content to run alongside the original video. A majority of guests opted to show off their festival-ready fits by pairing their 10-to-20-second video with a “What I’d Wear to Coachella” fashion feature.

Creators also had the opportunity to check out the Ray-Ban Stories smart glasses . Designed in collaboration with Meta, the lightweight glasses come equipped with tiny cameras that capture point-of-view photos and videos while connecting to smartphones for easy sharing.

Elsewhere, Creator House attendees experienced eyewear that took them to new reality entirely with Meta Quest 2 VR headsets. Guests donned the wireless headgear for a game of Beat Saber, slashing at 3D blocks to the beat of BTS songs.

Back in the corporeal world, Grace McKagan got the party going with a sultry set featuring songs like her 2021 single “One You Love.” While McKagan’s killer genes certainly contribute to her star power—her dad is Guns n’ Roses bassist Duff McKagan—she’s crafted a sound all her own, drawing on influences like Nancy Sinatra and the Yeah Yeah Yeahs. McKagan also included tunes penned alongside her first band, synth-pop outfit The Pink Slips. She closed out her set with the group’s “I’m Ready,” which opens stripped back and plaintive before roughing up into punky, bass-heavy grit.

21-year-old Garrett Seamans, known by his stage name carwash, offered some mournful magic of his own with nostalgic early singles and songs off his 2021 EP soap water. Backed by friends Jackson Vann (guitar), Angus Johnson (bass), and Sebastian Peters (drums), the musician crooned, “This feels like some bullshit teenage summer dream,” while sunlight glinted off his rhinestone sunglasses.

After a brief intermission increased anticipation for Kendrick Lamar collaborator Blxst, he ultimately took the stage to deliver precisely what his front row onlookers came to see: a series of hits from his critically acclaimed breakout No Love Lost. “Culturally, it’s nice to see an intersection between the more street side of R&B and a big brand [like Rolling Stone],” shared Grammy-winning A&R and music producer DDot Omen. “I wanted to make sure I saw this in real life.” Blxst’s day in the lead up to his performance will be chronicled in the coming weeks by Rolling Stone and Meta as part of their collaborative Behind the Creator series

Following Blxst, the action moved to the opposite side of the stage, where James Hype manned the DJ booth. “There was a moment where everyone started to feel the vibe … and was like, ‘Okay, now we’re gonna dance,’” Hype told Rolling Stone after his set. “It’s been an amazing day.”

And with Gryffin stepping out shortly after, the crowd was guaranteed to dance its way to the party’s conclusion. The DJ honed his production skills in his dorm room as an electrical engineering major at the University of Southern California before catching attention for his remixes of tunes by artists like Tove Lo and Maroon 5. The San Francisco native’s set sparked party-wide singalongs with mixes of crowd-pleasers, including The Killers’ “Mr. Brightside” and Whitney Houston’s “I Wanna Dance with Somebody” — plus plenty of his own hits.

“Palm Springs, where my real Gryffin fans at right now?” he called before launching into the Illenium and Daya collab, “Feel Good.” His devotees — including his wife Stephanie, who boogied with her best friend Lily in matching crochet dresses — shouted along.

As a breeze picked up, more and more attendees traded inner tubes for dancing shoes, though a few stragglers continued to jam in the shallow end and playfully splash poolside partiers. Those in the splash zone just laughed and bent to send water flying back — it was merely another way Rolling Stone Live kept things cool in Palm Springs.