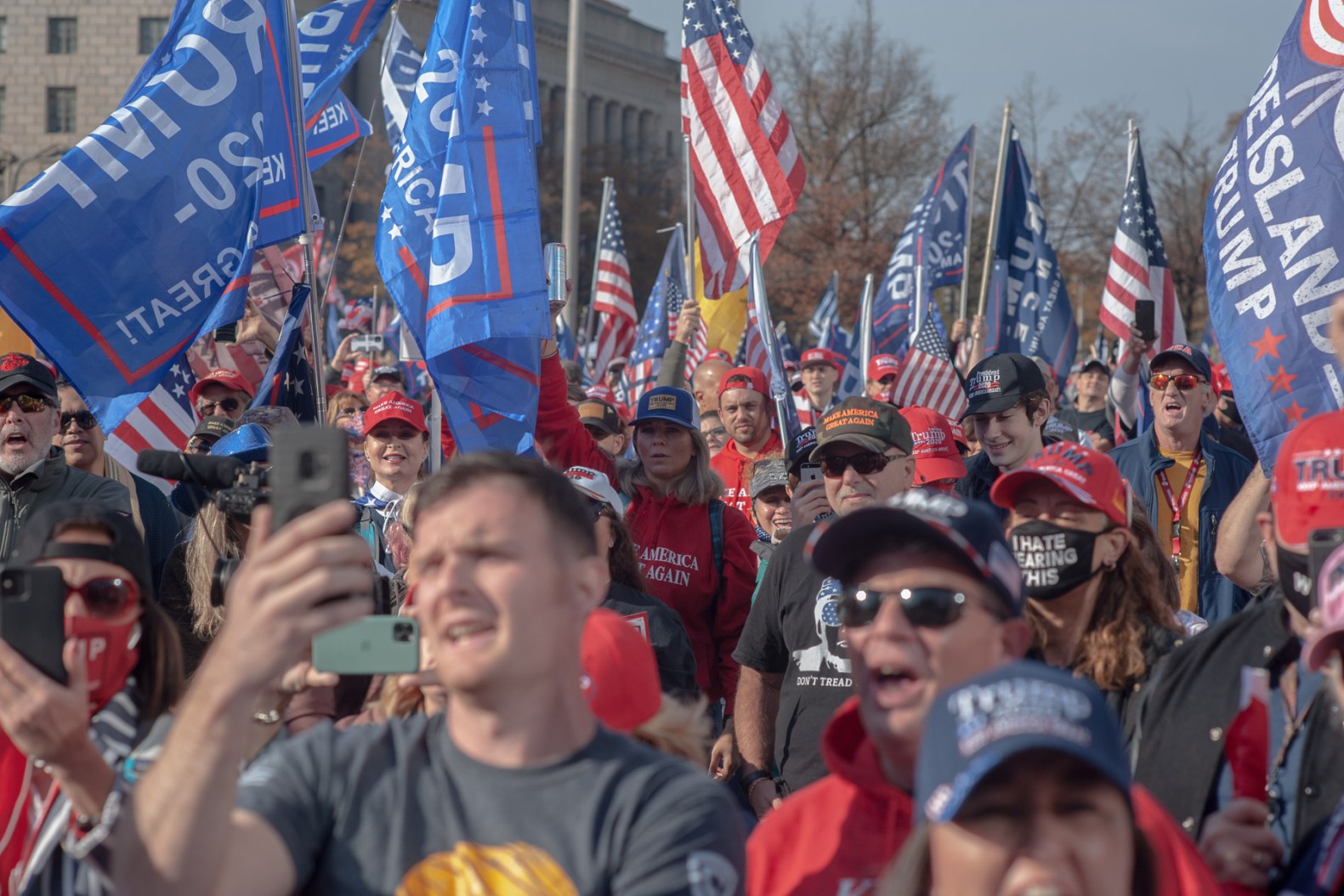 WASHINGTON, D.C. — You could almost feel their anguish.

Thousands of Donald Trump’s supporters streamed down Pennsylvania Avenue toward the Supreme Court here Saturday, their collective lament about a stolen election clanging off the white marble of the institutions this president has tried — is still trying — to pulverize. Billed as the “Million MAGA March,” it was a moment for the many corners of Trumpworld to get off the internet and into the streets to protest the outcome of the election. Women for Trump. Hispanics for Trump. Some 50 Proud Boys, sporting black and gold. QAnon conspiracy theorists and assorted MAGAlebrities with podcasting equipment. All were there.

Many of the crowd — estimated to number in thousands or possibly tens of thousands — genuinely believed that the 2020 election was fraudulent. Some thought there was still time to undo the results. But for most, the one thing they could not stand to lose was the feeling of belonging that being a Trump supporter has given them. No matter what inconvenient truths were crashing in, this tribalism, this mutual affirmation of unreality, this MAGA thing, which was always about more than politics, it had to go on.

“I think most humans are able to relate to a common theme, so for me, it’s emotional, spiritual, an uplifting kind of thing,” Trump supporter Robert Payne told Rolling Stone that afternoon. Payne, a 55-year-old computer engineer who flew in from Dallas, was holding a “Stop the Steal” sign. The rallies have always seemed spiritual to Trump the man, too. And he could use one now, more than ever.

All week, Trump sat sulking inside the White House, uncharacteristically mute, with aides reportedly tip-toeing around, trying to appease him. World leaders — including Britain’s Boris Johnson, who Trump considered a pal — had been calling Biden to congratulate him. The news was replete with images of Americans dancing in the streets at Trump’s defeat. But here, at last, were his true friends who had come to play. He promptly drove by in his motorcade to wave hello.

These rallies are what forged the adamantine bond between the president and his base. In the final stretch of the campaign trail, he held five of them across five different states in one day. Carrie Barker, a government worker from North Carolina, felt she had to drive here to show her gratitude. “This feels like the best rally that we’ve ever been to,” she said. “It’s homegrown; it’s organic.” How deflated will Barker feel if, after Trump leaves office, the MAGA times come to an end?

Everyone experiences the stages of grief in their own order, and at their own speed. Denial was rampant. One speaker assured the crowds that Trump could flip battleground states because “he has the greatest legal minds behind him.” (In fact, that morning, the president had placed Rudy Giuliani in charge of legal efforts.) There was fury, too — much of it directed at Fox News, which everybody now seemed to regard as the greatest Judas in political history.

“Election night killed it: They turned liberal,” explained Barker. The dagger was plunged when the network called Arizona for Biden early. But also because they’d been booking Democrats like Donna Brazile and Pete Buttigieg for months. And simply because Trump himself has issued a fatwa on Fox. “I will never watch them again. Ever. And I kept on live TV, 24/7 for the past seven years, all the time. I even watched it while I was at work, while I was on my computer,” said Barker. Now, it’s all about Newsmax or OAN.

Bill Lever, a Wisconsin man who tells Rolling Stone he’s unemployed because of the pandemic, issues a warning to “respectable journalists” Sean Hannity and Tucker Carlson. “Here’s what I say to all the Fox News people who are still respectable journalists: When you wake up one morning and you’re in a whorehouse, it doesn’t matter who you are or how you got there,” he says. “You need to get the hell out of there.” Standing beneath a tree in the shadow of the Capitol building, Lever sipped on a Lagunitas with his buddy, William Bergthold, 57, a home contractor. The two had flown in from St. Croix County, Wisconsin, “Which was stolen from us,” says Bergthold. Biden won the state by 20,000-plus votes and Republicans have produced no credible evidence of election fraud.

What is flying to D.C. going to do about that? “It feels good to be around people of like mind, people that know they’ve been ripped off, people that are drawing a line in the sand, and that are having no more of the bullshit,” he said. (A majority of St. Croix County actually voted for Trump.) Bergthold accepted that Trump might not be behind the Resolute Desk in two months time, but, he added, “He’s not going away; this won’t be the last of Donald Trump.” Would he keep attending rallies if Trump held them? “Absolutely.” A woman standing nearby added, “And he’ll be back in a few years, when it’s time to swear in his daughter!”

Q Is Back, But Does QAnon Have a Future?

How GOP Women Triumphed With Trumpism

Serena Lambeth, 49, of Alexandria, Virginia, attended with her two sets of twins. “The schools that the children are going to today aren’t giving both sides of the story,” she says. Her 11-year-old daughter, Pearson, says, “Just to see all the people who support Trump, it just makes me feel good because I don’t know a lot of people who support Trump.” Her mother then said that which is verboten here: “If it is Joe Biden, we will stand behind him because he will be our president.”

A hundred feet away, a different dictate was being passed down. Annelidous creatures — including Alex Jones, Sebastian Gorka, and Congressman Louie Gohmert — stood on the steps of the Supreme Court and whipped the crowds into a frenzy. Jones, a Sandy Hook truther and radio show host, barked about “Joe Biden and his demonic, pedophile family,” with plenty of vitriol about the Clintons, Anthony Fauci, Zeke Emanuel, a lab in Wuhan, Bill Gates, and the Geneva Convention.

A man next to me FaceTimed with his friends. “Dude, Alex Jones is actually here, right now!” The masses, still numbering in the thousands, lapped it up. The whole day felt like an inferno of contagion, with so few wearing masks or face coverings to help prevent the spread of Covid-19.

Gorka, a former White House adviser now best known for starring in back pain medication commercials on Fox News, spoke into the microphones: “Four years later, sleepy creepy Beijing Biden gets less votes in Chicago and less votes in New York and we’re supposed to believe he won?” His rhetoric grew more flammable with each syllable: “The election has not been certified… We have to put the pressure on… We want them to understand the fury of American patriots… We will not let them steal our republic.”

“You need to put the fear of God into every snake oil merchant, RINO establishment GOP politician — if you certify the election, you will never, ever get re-elected.” (When Rolling Stone approached Gorka for comment, he snarled: “That fucking rag? I wipe my ass with it.” He later clarified in a tweet: “Hey CuckBoy: I said I WOULDN’T wipe my arse with @RollingStone”.)

If Trump’s message to the establishment was that he wasn’t backing down, that message was received. All week long, Republican lawmakers were complicit in Trump’s dangerous game of make believe. House Minority leader Kevin McCarthy said on Fox that “President Trump won this election.” A poll found that 70 percent of Republicans do not believe the election was free and fair. The blind quote du jour that was incensing Washington came from an “anonymous senior Republican official” who told The Washington Post: “What is the downside for humoring him for this little bit of time?”

Now the downside was here, at the door of the United States Congress, in the form of thousands of rip shit angry voters who gulped down every one of Trump’s pockmarked tweets and believed them all. “You have no idea how many rural Americans have AR-15s, and they are just waiting — waiting to take to the streets,” a woman screamed into a megaphone. “You have awakened the Beast!”

Away from the microphones and cameras, conversations overheard between Trump supporters milling around the Capitol complex had more than a tinge of sadness to them.

“How does the guy whose entire symbol is the American flag actually lose?”

“The numbers don’t add up. Nothing adds up.”

After the speakers finished up at the Supreme Court, the crowds began to disperse, but hundreds strolled back down Pennsylvania Avenue for Freedom Plaza, where the day’s action began. By dusk, fringe crazies from both sides of the political spectrum fanned into the downtown streets to do battle. The Proud Boys were on the prowl.

Meanwhile, scores of counter-protesters were penned in by police at Black Lives Matter Plaza, which occupies several blocks in front of the White House. Clad all in black, a phalanx of Antifa-types moved in lockstep, on the lookout for any Proud Boys. Others beat drums, lit small street fires, screamed at police, and produced exactly the kinds of images that Republicans ran on. (Indeed, Trump would soon go on a Twitter spree, beaming out video clips of these black-clad radicals slugging his supporters in the streets of the District). The ensuing skirmishes led to the arrests of at least 20 people and multiple police officers injured.

The mood was best summed up by a couple of local teenager skater kids, posted up with their boards at Freedom Plaza, watching the MAGA crowds disintegrate as night fell. “They’re just trying to make themselves feel better and everything,” said one 15-year-old. “But this is pointless. They should just accept the L.”