Deputy U.S. Marshal David Siler was only 20 days old when one of Ohio’s most notorious fugitives, Lester Eubanks, escaped from prison in December 1973. Still, the getaway and the original crime — the senseless murder of a child — keep him up nights. “It’s one of those cases that you can’t put down,” he tells Rolling Stone. “It’s so appalling that someone has to headhunt to catch this monster.”

Eubanks had originally been sentenced to the death penalty for the November 1965 murder and attempted rape of a 14-year-old girl, but, in 1972, the U.S. Supreme Court ruled the death penalty unconstitutional and commuted his sentence to life without parole. He managed to wriggle free from living out his days behind bars when, due to good behavior, he was allowed to go Christmas shopping at a local Columbus, Ohio, mall on December 7th, 1973. He failed to meet up with the guards at the appointed time, and has been on the run ever since.

George Floyd's Body Is on Trial for Its Own Murder

Grindr Murder: Could Kevin Bacon's Death Have Been Prevented?

Despite the fact that 45 years have passed since the escape, Siler and the rest of the U.S. Marshals have ratcheted up the search for Eubanks, now 75, by adding him to the U.S. Marshals Most Wanted List. He made the grade on December 7th, 2018 — the 45th anniversary of his escape. Siler and the Marshals are hoping that his new Most Wanted status will shine a spotlight on the man, revealing a runaway killer who has probably been living in plain sight for decades. 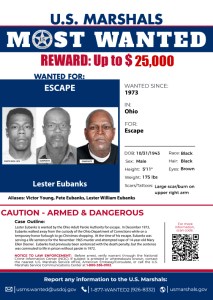 Someone may know Eubanks because of his love of art, music and martial arts — or they might just recognize the large scar on his upper right arm, a wound of unknown origins. “[All we need is] that one tipster, that one person that can bring in the last piece of the puzzle, even if they knew him a year ago, two years ago,” Siler says. “That’s what we’re looking for. Someone who’s like, ‘I know that guy.’”

Lester Eubanks was 22 years old — with a history of sexual offenses — when he murdered fellow Mansfield, Ohio, resident Mary Ellen Deener. According to 1965 article in the Mansfield News Journal, 14-year-old Deener and her 12-year-old sister, Brenda Sue, were doing laundry for the family at a local laundromat one evening when they ran out of change. When Mary Ellen headed to another laundromat to get some dimes and nickels, she ran into Eubanks, who, after attempting to sexually assault her, shot her twice and beat her with a brick. She was left for dead, the change spilling from her hand. Although he later pleaded insanity, Eubanks confessed to the murder and went to prison for his crime.

The murder was obviously scarring for the Deener family — mourning the loss of a bright, quiet teen who reportedly dreamed of becoming a nun — but Eubanks’ eventual escape was far more horrific. Mary Ellen’s older sister, Myrtle Carter, was 18 and married at the time of the murder; she describes to Rolling Stone the toll Eubanks’ disappearance took on her family. “To use as powerful a word as I can think of, we were traumatized,” she says. “We thought it was over. And then lo and behold, he goes Christmas shopping, first of all — that’s a shock — and then escapes. My mom, she was just beside herself.”

Until his escape, Eubanks had been a model inmate for the entirety of his incarceration. For instance, when he was still on Death Row in 1972, he was the subject of a glowing profile in the Columbus Dispatch on prison artists, which heralded him as “the best of the Death Row” painters. He’s pictured beside his triptych of counterculture activist Angela Davis: one Davis prim in glasses and a low bun, one with a Mona Lisa smile and a bountiful afro, the final resolute under a furrowed brow. “I have admiration and respect for her,” he told reporters as he filled them in on his self-taught style.

Eubanks was taken off death row that same year, and, at the time of his escape, he was an honor inmate at the Ohio Penitentiary. That earned him the privilege of a Christmas shopping trip at the Great Southern Shopping Center in Columbus. The hope has that giving inmates a measure of trust would help with their reformation. That program was greatly curtailed after three inmates, including Eubanks, escaped over the course of 10 days, according to a 1973 issue of the Columbus Dispatch.

“One can laugh at that, just due to the fact that this guy walked away,” Siler says, noting the absurdity of the situation: a convicted murderer allowed a holiday jaunt through the mall all by his lonesome. But the Deputy U.S. Marshal is more intrigued by how Eubanks was allowed the privilege in the first place — what Siler sees as the cunning it took to get outside the gates, situated for escape.

“He had to start this process two or three years prior,” Siler says of Eubanks’ inclusion in the prison’s good books. “Manipulating those guards, manipulating the system, being that good guy that he portrayed himself to be. It just got him outside the gates, and that’s all he was working toward.”

After escaping, Eubanks melted into the new world of the early 1970s, reportedly heading to Michigan and then Los Angeles. Authorities believe that he adopted the name Victor Young, and had some help from what Siler calls “associates” to secure a new life and freedom. It would be 20 years before anyone went looking for Eubanks in earnest again.

John Arcudi, police captain in charge of the Detective Bureau of the Mansfield Police Department, became intrigued by the case in the early ‘90s, once again thrusting it into the public eye. Although the actual murder had taken place when Arcudi was still in high school, he started looking into Eubanks’ escape more out of curiosity than anything else; since the incident took place in Columbus, it wasn’t even in his jurisdiction. A quick peek at the NCIC (or the National Crime Information Center, a massive crime database) revealed that the man was not even entered as a wanted fugitive, which meant that if Eubanks got caught speeding or another small infraction, his status as escaped criminal would not even register. “It had been 20 years and it was like nobody was working the case that we were aware of,” a now-retired Arcudi tells Rolling Stone. “He was just out there on his own and nobody seemed concerned about it.”

Flummoxed by that lack of interest, Arcudi contacted America’s Most Wanted, which aired a story about Eubanks in 1994. “We were overwhelmed with tips,” Arcudi says, adding that they received around 200 call-ins after the show appeared on TV. Overwhelmingly, the fugitive was reported to live in Northern California — at least at some point in time. Arcudi worked with LAPD detective Tim Conner on the case, and together they sussed out that Eubanks may have been working at Quality Quilters mattress factory in Gardena, California, right before the show aired. Still, they didn’t manage to pin him down. “I think we were probably fairly close to Lester at some point, but the tips and the technology just didn’t make it where we could get close enough,” Conner, now retired, tells Rolling Stone.

“He’s very cunning; he’s not a dumb guy,” Conner adds. “He’s been avoiding the authorities for forty plus years. I don’t think he ever took a job where he needed to be fingerprinted or photographed. I don’t he ever took employment that ever did any background check. He was a guy who didn’t lay his head in any one place for very long.”

And, it seems, he’s maintained the same vagabond lifestyle ever since. As of this writing, Siler says he’s received tips from a bevy of states in response to the U.S. Marshals’ Most Wanted announcement: Florida, Georgia, Alabama, California and Ohio, to name a few. Still, he’s waiting for that one call — the one that will tie the fugitive to a definitive time and place, that will let him move in for the arrest. And he’s not the only one.

“I’ve thought about him over the years,” Conner says. “I think he’s probably still alive. I think there’s people who know who he is and what he did. They’re just not giving him up.”

Myrtle Carter, for her part, has tried to live her life as fully as possible — although she did tend to keep a tight rein on her children in the aftermath of her sister’s murder. “I don’t want you to think this has consumed my life, because it didn’t,” she says. “I’m a Christian and I trust God and I allow him to do what he’s going to do in my life. I don’t dwell on things that I can’t change. It doesn’t consume me, but it bothers me that he’s still missing, that he’s still free and took her innocent life. That bothers me.”

Siler is bothered, too — partly because he believes that Eubanks is not acting alone, whether his accomplices know of his criminal history or not. He believes that the man is married, that he may have children and grandchildren. And that, Siler says, is a tragedy all its own. “The sad thing is, those who he has won over are victims, too,” he says. “They have no idea. So when we come knocking on the door and apprehend that person, their families become victims. And that’s sad.”