YouTube in 2007 was the Wild West of freak comedy. Offbeat humor, celebrated through cheaply produced and easily distributed clips, dominated the young video-hosting platform, founded two years prior. Catchy songs about shoe shopping and trippy animations starring sleepy unicorns were elevated to the “Featured Videos” section of the site, the breeding ground for niche humor hits like “Chocolate Rain” and “Charlie Bit My Finger.”

At that point, 19-year-old Chris Crocker was living with his grandparents in Tennessee, a difficult existence for a gay teen who started getting home-schooled after eighth grade because of incessant bullying. On MySpace and YouTube, Crocker (real name Chris Cunningham) posted confessional videos that provided commentary on sexuality and “realness.” He sometimes assumed over-the-top Southern characters like Earl Annie Edna, a talk show host and vocal Crocker hater. On both platforms, Crocker gained a following for his videos.

The clips themselves stayed true to YouTube’s strange humor but were personal enough to offer a glimpse into his life, however exaggerated that caricature of himself happened to be. “I’m just a real bitch in a fake-ass world,” he exclaimed in one video, the original since deleted when Crocker deactivated his account in 2015. As his videos started to rack up more views, people outside the burgeoning YouTube community started to take notice. In a May 2007 profile, Seattle alt-weekly The Stranger dubbed Crocker the “new type of teenager – a young man connected in ways that let him transform his rural frustrations into national online fame, but who is still painfully disconnected.”

“YouTube was where I could play a character and be able to tell it like it is,” Crocker tells Rolling Stone on the phone from Tennessee, where he still lives. “Everything you did was to make people laugh. I never planned on being my authentic self.”

That is, until he released pair of videos in early September 2007. Following Britney Spears’ unfortunate “comeback” performance at the MTV Video Music Awards, where shoddy lip synching and sloppy dancing caused her to face public ridicule, Crocker, sitting against a backdrop of a white sheet, thick bands of black liner tracing his eyes, broke down in tears defending the star from critical bloggers like Perez Hilton. “If anything ever happens to her, I’m jumping off the nearest fucking building,” he said in the video, titled “Leave Britney Alone.”

“That moment was a slice of the real me,” Crocker says.

With the video, now 10 years old, Crocker incorporated pop culture and an inflated version of self, which hit the sweet spot in terms of comedy and perceived authenticity. This combination proved accidentally successful for Crocker and opened the floodgates for the YouTubers of today, especially those in the gay community. A decade ago, the online LGBTQ population had not yet emerged on the video-posting platform, and anonymous commenters left harsh messages and death threats on Crocker’s videos. He spoke in a soft falsetto, had dyed blond hair and, at the time, was not presenting as fully male. Now, YouTubers who post coming-out videos still face public criticism, but vloggers share their experiences to a more welcoming audience.

Between Crocker’s early performance and character-driven videos and the authentic “Leave Britney Alone” clip that followed, new media academics acknowledge that his influence over the future LGBTQ vloggers has been instrumental. Michael Strangelove, a lecturer in the Department of Communication at the University of Ottawa and author of the 2010 book Watching YouTube: Extraordinary Videos by Ordinary People credits Crocker as helping to bring camp performance to the digital realm with the attempt at being genuine. Crocker’s realness (whether true or perceived) helped lead the way for future vloggers to build an audience based on personality and pop culture criticism.

“This is camp 2.0,” Strangelove says. “The old camp performers of the mid-Twentieth century saw themselves as performers, and they weren’t in the business of revealing themselves and engaging in the audience. The medium of the Internet is changing identity politics. Chris Crocker gets wrapped up in all of this and is significant in this new early wave of performing and emoting.”

While being a fan helped Crocker capture the attention of the Internet, his original goal with his videos was to make people laugh. “I would throw out things,” Crocker says, “and let people draw their own conclusions on ‘Is this real? This is a joke.'”

In reality, the “Leave Britney Alone” videos were the first of Crocker’s where he wasn’t performing at all. In addition to observing Spears’ downward spiral from afar, which included shaving her head, rehab and a custody battle, Crocker was dealing with the tangible fallout of his own mother’s struggles. She had just returned home after serving in Iraq and developed an addiction to meth. His family had disowned her. So Crocker responded to the difficulties of the two women he looked up to most the same way he’d responded to haters: by turning the camera on himself. This time, though, the emotions weren’t for show. “I’ve always looked up to Britney,” Crocker says, “and the other woman in my life who I looked up to, my mom, was falling apart. I didn’t know how to explain that because I knew people wouldn’t take me seriously.” 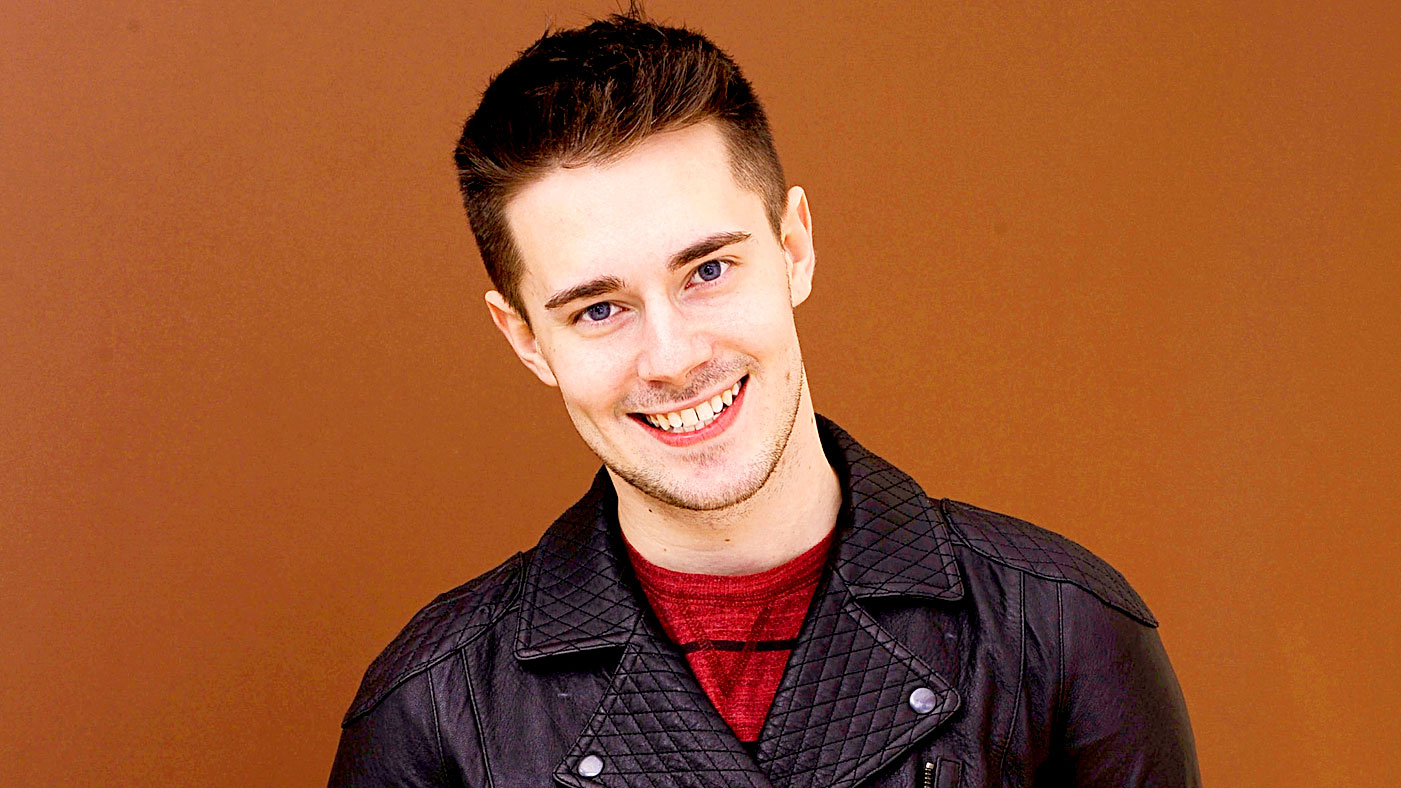 Immediately, the video gained traction, racking up 2 million views in a single day. Crocker made appearances on Jimmy Kimmel Live, Maury, and more discussing the virility and authenticity of the video. In the interviews, the Crocker embraced the caricature of his early clips, portraying a braggadocios and flamboyant teen seizing the opportunities having one of the first viral videos afforded, and not the vulnerable young person who experienced real heartache.

“I knew it was too much too explain and it wasn’t what people wanted to hear so I gave them this character,” Crocker says of leaving his mother’s struggle out of his media appearances. “It’s the biggest thing in my life, being so wildly misunderstood.”

That misunderstanding proved to be Internet gold, the perfect combination of right time, right place, right content. “If you want to get famous, the first and fastest path is to attach yourself to an event that’s bigger than you,” says Strangelove. “Not that that was his strategy, but it proved very successful. It was unusual, it was early on, it was a part of the exploding gay pride culture. It was the right time and the right place and the right type of performance. Attach it to a popular celebrity and all the stars aligned.”

In 2007, 100,000 views was considered viral and tabloids and gossip websites like TMZ and Perez Hilton were where fans got their celebrity fill. While being a fan was nothing new, Crocker combined maintaining star enthusiasm while making headlines himself: through capturing an audience using the relatively new medium of YouTube. The constantly morphing view of celebrity worship had again shifted to suit the new millennium with the novel phenomena of fan becoming star.

“Chris Crocker was an exceptional example [of] a fan who became a full-blown celebrity by acting out his fandom,” says says Mark Duffett, senior lecturer in media and cultural studies at the University of Chester, U.K., and author of Understanding Fandom. “While fans make popular videos all the time, his caught on much more the most. It claimed to be cross talk against Britney’s detractors, but after he put it out there, it went viral, much like, say 1960s newsreel footage of Beatlemania. Popular notions of hysterical fandom have been a kind of genre expectation for decades. Crocker exploited old stereotypes in a relatively new environment.”

The term wasn’t yet a part of popular vernacular, but Crocker was at the start of the personal brand movement. His presentation, thought and delivery in the video – however indicative (or not) of his true personality at the time – defined his public view, still a decade later. Like many who later found fame for their online personas – including Joanne The Scammer a.k.a. Branden Miller, a friend of Chris’s – Crocker aimed to parlay his internet fame into a potential career in reality TV, music and eventually, porn. Unlike Paris Hilton and Nicole Richie before him, who were rich and relatively famous to begin with, Crocker proved the average person could achieve reality-TV-level fame just by turning the cameras on themselves. Add in the outside power of celebrity, and Crocker’s platform became viable.

“Britney becomes a way in which Chris Crocker could actually move to a visibility to do other things,” says P. David Marshall, a new media, communication and cultural studies professor at Deakin University in Melbourne. “Whether that’s making music, becoming an actor, performing gender ambiguity, whatever he wanted.”

While Crocker admits that given what he knows now – like the intense scrutiny and anonymous homophobic hate that followed – he might not have hit publish on the video, but there’s no taking back its impact. The perfect storm of a defining celebrity moment combined with the emergence of personality-based media allowed for a self-filmed and produced video to garner mainstream attention, much like a big budget television show, the legacy of both carrying equal weight, according to Marshall.

But for Crocker, it’s a career-defining moment he still hasn’t wrapped his head around.

“It’s crazy because it takes on an identity of its own when really that moment for me was a time when I was figuring out who I was sexually, gender-wise, family, my mom, my favorite pop star is falling apart,” Crocker says, “and then it takes on its own identity to other people. It’s hard for me to gauge it still, 10 years later.”