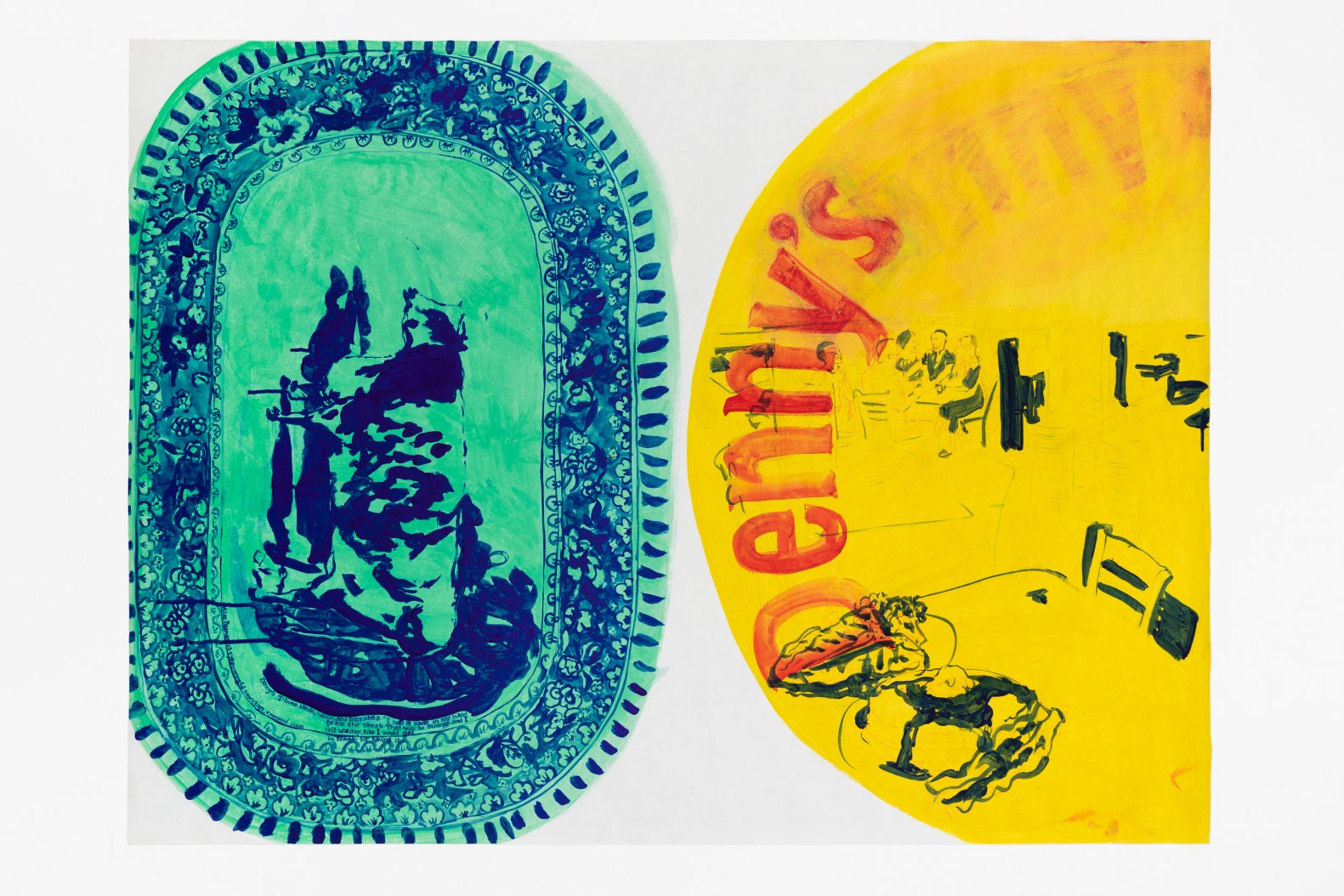 At first glance, it looks like a traditional food diary. A one-page questionnaire with simple prompts: “Who did you eat with? What did you order/have? Is there any particular reason you wanted the food you ordered or had?” The first questions, though, reveal a singular context: “Years in prison for wrongful conviction. Where did you eat your first meal after release?”

It’s the answers to these questions that artist Julie Green turns into poignant pieces of art. The Oregon State University professor (who prefers gender neutral pronouns) receives these questionnaires from people who have spent years behind bars for a crime they didn’t commit, and crafts them into brightly colored depictions of the first meals prisoners have when they regain their freedom. Cheeseburgers, corn beef sandwiches, seafood and t-bone steaks are Green’s subjects, decorated by state birds and other pendants that serve as reminders of their emotional weight: the vast difference in decadence between these meals and prison food. The resulting series, First Meal, is Green’s follow up to the successful Last Supper collection, their portrayal of the last meals death row inmates eat before they meet their fates.

“This series has been on my mind for 20 years, and I decided it was time to start,” Green says of First Meal. “Originally, I was going to do one first meal at the end of the Last Supper, when we quit having capital punishment. But the end is not in sight, and I didn’t want to wait any longer.”

Green’s work is a timely protest against a criminal justice system that continues to let its cracks show. The first time Green’s creative eye was exposed to one of those cracks was in the early 1990s, when they were teaching painting at the University of Oklahoma, in the state with the country’s highest per capita execution rate at the time. Green saw an article that detailed death-row inmates, humanizing the capital prisoners by recounting their clothing, facial features and, ominously, a menu of what the inmate requested before his execution. Green cut out the article and saved it.

It led to the over 600 paintings of inmates’ last meals, painted onto intricate china and expensive-looking dishware, which garnered Green national attention in the early 2000s. Now, most of Green’s time is spent using acrylic on large canvasses to recreate the first meals of exonerees. “I have been painting on this project full-time, for 40 to 70 hours a week, since September. There are six completed paintings to date,” the professor says, including an artistic rendition of the first free meal of Kristine Bunch, a woman who had served 17 years behind bars for the death of her son before she was exonerated and released.

Bunch and Green met at the Block Museum of Art at Northwestern University, in Evanston, Illinois. “Kristine was at my opening of The Last Supper, and we had a conversation,” Green says. “She had a question about a plate that I had not painted that represented a Texas inmate — now executed — that Kristine knew, so I went home and painted a plate for Kristine. I painted a facsimile of it.” A relationship was born and, in late September, Bunch’s first meal was the first in Green’s collection.

Green had also heard other first-hand accounts of wrongful convictions in a similar way. After about a week of being at OSU, the professor attended a talk on campus. Oregonians for Alternatives to the Death Penalty brought two exonerees to the school to share their stories, and Green approached them at the end of their presentation. Green asked them, of course, about their first meal after they returned to the outside. They shared the details with Professor Green and, in the same vein as the death row inmates’ meals, Green went home and painted their answers on ceramic plates. These pieces became a part of The Last Supper series, protesting capital punishment.

Growing up, Green’s conservative Christian family was in favor of the death penalty. Their Navy father moved the family across thirteen states in Green’s youth. “I drew a lot. I wanted to be a flight attendant until I was four, and then I wanted to be a painter,” the artist says.

“I grew up in a Christian, conservative, Republican, midwestern family, and I’m, I guess, none of those things now,” Green says. “But my mom and full family used to support capital punishment and, because of the Last Supper project, my mother no longer supports capital punishment. And I like to say, if you can change your mom, you can change the world.”

Like the 'Verzuz' of Illustration Battles, 'Secret Walls' Brings Local Artists to the Big Stage

Green collaborated with Sara Sommervold, the director of Northwestern’s Center on Wrongful Convictions to build the questionnaire given to the exonerees. Green originally volunteered to speak with the exonerees, but left the interviews to the center, trusting their relationships with many of their clients. The questionnaires are handed out or conducted over the phone, and the information is given to Green, who turns the words into art. “In the end, I will be sending a digital print of the finished painting to the exoneree as well as a small honorarium,” Green says. “I want to be aware and appreciate the time spent.”

Naturally, though, working with such an emotional topic has its challenges. “This project has been perhaps the hardest series I’ve ever worked on,” Green says. “The Center on Wrongful Convictions is taking time out of their busy schedule to reach out to exonerees for my project, so I’m aware that these attorneys could be working to save lives and they’re helping me instead. I feel that weight.”

The content itself is also difficult, as Green becomes embedded in the painful and traumatic stories of people who have spent long stretches of time behind bars for crimes they didn’t commit. Along with details of the exonerees’ meals, Green learns the stories of every exoneree who fills out a questionnaire. “The meal, of course, is a joyful moment, but it’s no balance for the wrongful conviction.”

“Much of my work is about time and the passage of time. Twenty years spent on The Last Supper, inmates’ time in prison, time for a last meal, time to be released,” Green says. “First Meal paintings are full of pathos and are a slow go in the studio. But a month spent on a relatively simple painting is a short time when one considers years spent in a wrongful conviction.”