Inside the Best Pot Party in California - Rolling Stone
×
×

I knew the edibles were kicking in when I felt the mountain move.

“Can you feel the ground pushing back up against your legs?” the woman guiding us had asked. It sounded so ridiculous at first, the idea that the land had a life of its own, and was pressing upwards – until it didn’t, all of a sudden. My eyes were closed, and I was lying supine on a green yoga mat atop a hillside in Malibu. I realized a swell of energy was radiating out from the Earth’s core, all the way to the backsides of my legs.

This, the “Touch” station, was only the beginning. It was a balmy Saturday evening, and I was exploring the future of marijuana-enhanced leisure activity at an event called Immersion, a series of experiences highlighting each of the five senses, at a chic house overlooking the Pacific Ocean. Before the night was up, the 75 or so guests would dine blindfolded, get lost in a sound bath, paint their essences, inhale essential oils, and, yes, become deeply in touch with the mountain — all aided by cannabis.

In the past decade, as marijuana has become increasingly legal, hundreds of entrepreneurs have tried their hand at creating weed-themed bars and gatherings and festivals. These spaces and events frequently disappoint, and sometimes even get shut down. They often involve getting you as high as possible in physical and social environments that are downright uncomfortable once you are stoned: Blazing sun. Hot pavement. Crowded rooms with no windows.

A few weeks back, a friend and I survived the Fyre Festival of pot parties. The invitation promised a DJ spinning vinyl; in reality, it was a guy playing MP3s off his computer. Sponsors were passing out free joints, but getting high doesn’t quite resolve the ick factor of an infinity pool full of dead flies. At one point a shuttle full of people trying to leave got trapped by another car in the driveway, and I worried Ja Rule might be about to pop out from behind a corner, laughing.

But Immersion was something different. Something special. Something designed to accommodate and enhance the exact experience of being high. As widespread as legal marijuana has become in 2017, Immersion managed to break new ground and offer a tantalizing glimpse into how different life might be once more people unwind by consuming cannabis, instead of drinking. 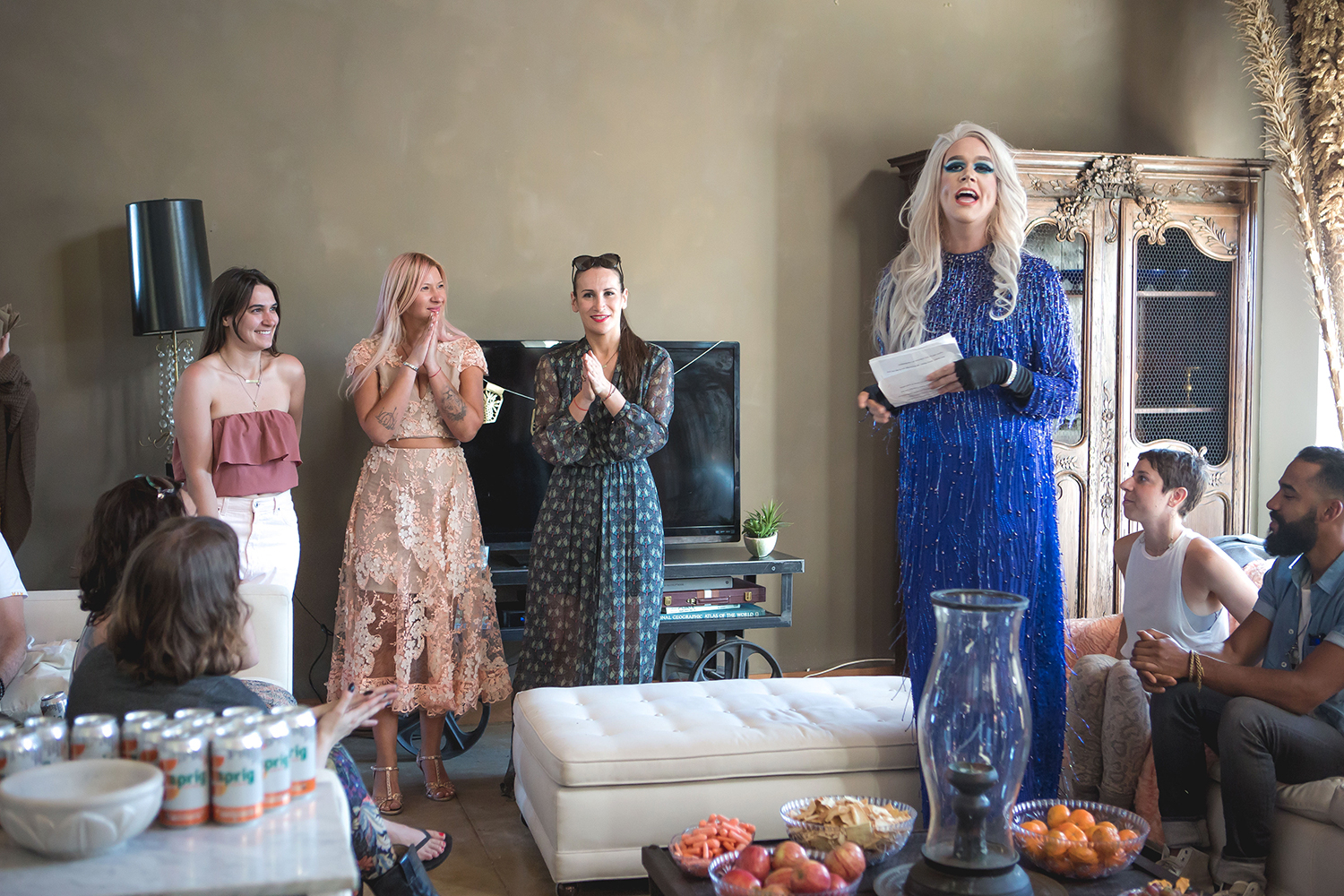 It’s not easy to throw an event that serves and involves marijuana. There are legal considerations, first and foremost. Even though adults in eight states and Washington D.C. can now legally light a joint at home, it’s quite difficult to find a communal space where you are allowed to do so. Pretty much nowhere with legal weed offers permits for pot events and lounges. Denver just passed an ordinance to begin allowing it this past November, four full years after the state of Colorado legalized recreational use. Maine and Alaska and Nevada are moving slowly toward allowing social use, but regulators are gun-shy. Quasi-legal spots exist for now in California, but they’re largely subject to the whims of law enforcement, landlords and neighbors.

And then, almost as challenging, there is the question of what to actually do at an event that primarily serves pot, other than get high. We’re familiar, as a culture, with what kinds of activities are enticing when we drink alcohol: dancing, socializing, brushing arms with strangers, watching baseball in the sun. Now that the widespread legalization of marijuana is bringing the feeling of being stoned into the mainstream, a new world of possibilities is opening up for weed-enabled leisure. However, very few existing marijuana events attempt to offer much of a holistic experience.

“I went to a few other cannabis events before, where it’s just really loud music, or the main activity is a bong-ripping contest. It feels flat and awkward,” says Katie Partlow, one of the organizers behind Immersion. “I try to start with creating a space where I know people are going to be welcome and comfortable.”

At Immersion, Partlow and her partners created a much more introspective and unusual social environment than what might be possible at a bar. Eating West African beignets and Mbongo stew while blindfolded and high not only heightened the taste of ginger and Cameroonian seasonings but also created a bizarre interpersonal experiment. Without eye contact or facial expressions, all private conversations ceased and the table became a sort of chat room of disembodied voices. “I think I have a drink in front of me! Does anyone else feel a small glass?” Conversation lurched and sputtered, but by the end the blindfolded meal had created a profound sense of intimacy among strangers.

Each moment of Immersion felt carefully considered and planned. The warm welcome from our drag queen hostess, Sparkle, in her floor-length, blue-fringed gown. The ability to get lifted at your own pace, sampling from stations of vape pens, glistening buds and bongs, low-dose infused truffles, pre-packed one-hitters and non-psychoactive CBD mocktails. The consumption-guide placemat explaining to neophytes how to eat the right amount of edibles. The seamless division of the party into “vibe tribes” – groups led from station to station by beautiful women called “love warriors,” wearing muted earth tones. The subtle inclusion of quality pot products, without subjecting anyone to an uncomfortable sales pitch. 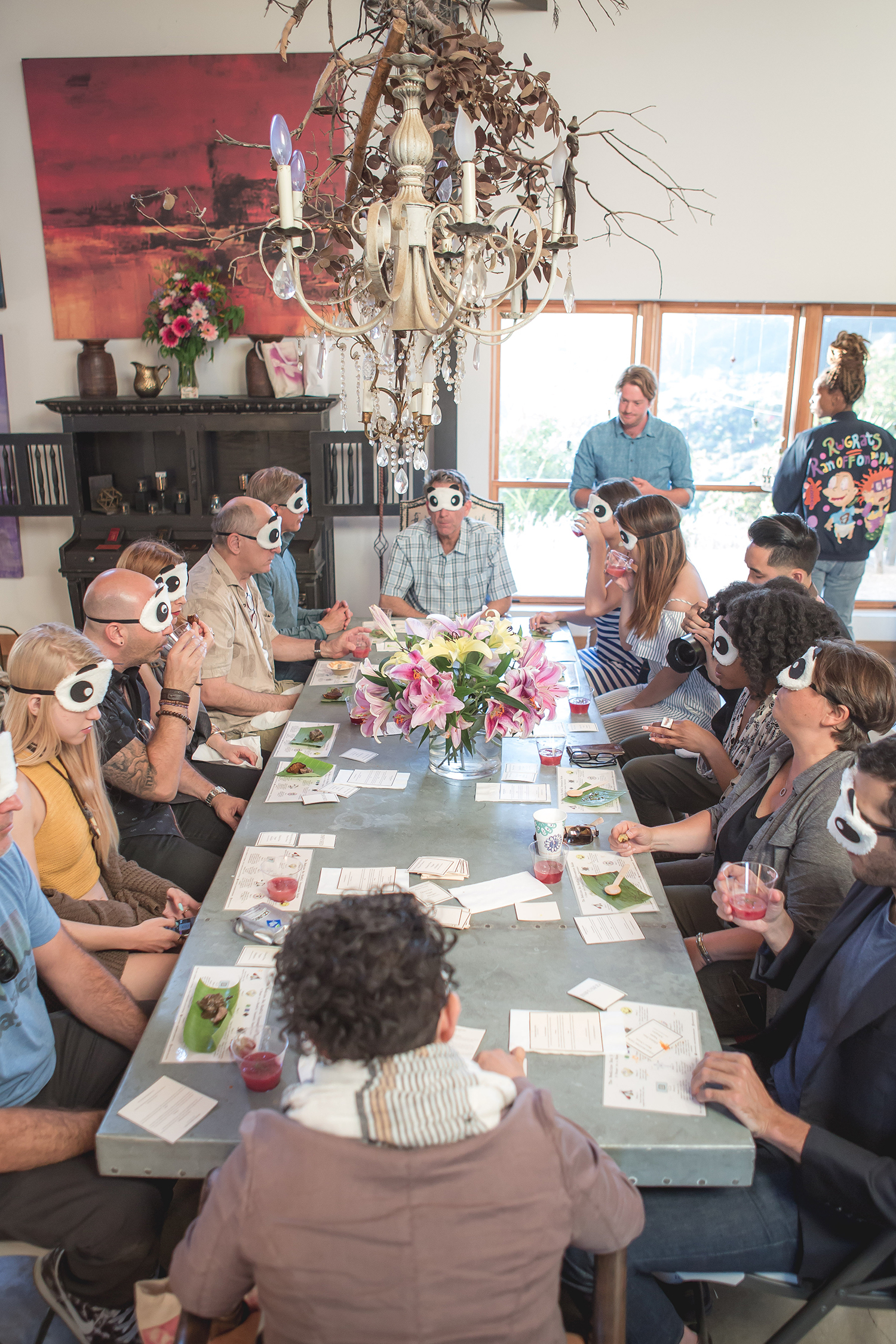 “When people focus too much on the weed brands it feels almost like, is this a trade show? I don’t like too heavy branding at all,” Partlow said.

Smoking marijuana can often suspend or rejigger the normal flow of conversation, and so the best stoned activities sometimes involve no talking. Take sound baths, for example. Last month I went to a weed-themed sound bath in conjunction with the launch of Sigur Ros’ new line of edibles. Everyone ate their fair share, got comfortable, and stared at a spider-shaped light installation that pulsed to the beat of the band’s live performance.

Somehow Immersion’s iteration was even more affecting, despite its obvious lack of rock stars. Light streamed into the one-room building where we lay on fabric and fur pelts. “I feel like this pillow was made for a head,” a companion in my vibe tribe observed, as he stretched out. The last thing I saw before I closed my eyes was a guy with a peace sign t-shirt sitting before a gong, a glass bowl, a digeridoo and some chimes. Some otherworldly keening ensued, and over the course of the next fifteen minutes, I swear I felt all my muscles loosen and my bones realign.

Perhaps it’s no surprise that Immersion was conceived and executed by three women: Partlow, of Little Face events, and Anya Matusevich and Sasha Perelman, of Higher Beauty, a marketing, events and consulting firm. I first became a fan of Partlow’s in February 2016, when I attended the intriguingly named Comedy, Cake + Cannabis. Though the paper at the door advised, alarmingly, “No Guns, No Knives, No Bongs, No Nonsense,” inside I found an exhibit of frosting and fondant-twisted art in a gallery filled with stoned twentysomethings taking in sets from Los Angeles comedic gems like Kate Berlant and Brandon Wardell.

The whole thing was so well executed, and attracted such a diverse crowd, that I tracked Partlow down and have tried to be at every event she’s thrown since. Her 4/20 party last year featured the mesmerizing CannaMiss Marquez, a burlesque dancer wearing a crown of weed-leaf-shaped green feathers, who smoked a joint while stripping down to tasseled green pasties and sequined green panties.

Perelman and Matusevich are relatively new to cannabis, but that can be a strength. With the polish and professionalism they bring from the corporate events world, Partlow’s penchant for the strange and surprising found its fullest expression. That is, until the next event.

“I want to do something next level, just getting people up and moving and not just sitting and high,” Partlow said. “You can stay home for that, you know?”