It’s barely been three months since Don Stevens stopped being mayor of North Bonneville, Washington, and he’s already feeling distraught about his legacy. We’re sitting on the misty banks of the Columbia River, nestled in a lush gorge about two miles off the Pacific Crest Trail, when the 61-year-old lights a joint, takes a hit, passes it to me, and lets out a forlorn sigh.

“I almost feel how Obama must be feeling, you know? Because like, this new guy just comes in and starts wrecking everything you’ve done,” Stevens says, his grey curls fraying in the wind. “The mayor and some of these city council members, they’re haters! They hate cannabis.”

During his tenure as mayor, Stevens led the city of North Bonneville into a unique experiment: opening the first (and only) government-owned marijuana store in the entire United States. In 2015, when the North Bonneville Cannabis Corner first opened in a green tin shack on a quiet street, the retailer made national headlines, inspiring everyone from Fox News to the Washington Post to come peruse their city-subsidized buds. It’s a powerful idea in an era when politicians at all levels are thinking of the once-verboten intoxicant as a potential source of revenue. Instead of imposing an onerous local tax to squeeze legal weed businesses for extra cash, as other cities and counties across the country have done, why not just commandeer all of the profits outright? The city established a public development authority, like the kind that runs state-owned railways and lotteries, leased a building, obtained a license, and voilà! Government weed.

But three years later, the future of the only city-owned pot shop in America is very much in question. In January, a new mayor took office – a former city councilmember named Brian Sabo, who has clashed with Stevens for years.

“We think totally different,” Sabo explains. Stevens is the kind of guy who flashes the peace sign in greeting, believes the two-party system is “a scam,” and makes liberal use of the word “dude.” Sabo goes to church every week, doesn’t use cannabis and voted against the law that legalized weed in Washington. He supports medical use, though, and smoked pot when he was younger. But as everyone in this tiny city of about a thousand people knows, Sabo is not a fan of the Cannabis Corner.

“I’d love to just sell it and let it go private,” Sabo says. “I don’t think government should run [a] business. You put together a group of people under a public development authority and they’re kind of, how do I put it, they really don’t have to be held accountable.”

Most people assume there are only two options when it comes to pot: legal and not legal. This is not at all the case. For years, economists, activists and health experts have been debating the various forms that legalization or decriminalization might take. A gifting economy, like the one in Washington DC? A free market, like the one in Colorado? An oligopoly, like the one in New York? Among the many choices, the idea of a state-controlled monopoly has emerged as a favorite of academics like Jonathan Caulkins, a professor of public policy at Carnegie Mellon. Caulkins is one of the most prominent experts arguing that non-profit marijuana stores, and state-owned monopolies specifically, are the simply best option when it comes to legalization.

“I am terrified about the idea of a for-profit cannabis industry. I think it could turn out very badly and induce people to use more,” Caulkins says. Research shows that government-owned alcohol stores create better public health outcomes than private enterprise. Pot is nowhere near as harmful as alcohol, but in theory, government-operated marijuana stores would accomplish something similar: discourage abuse by minimizing advertising, keeping prices high, and perhaps restricting the sale of extremely potent products like hash oil (aka wax, dabs, shatter, etc). Then again, artificial shortages and price hikes could simply push consumers back into to the pre-existing black market.

North Bonneville’s annual budget is about $1.2 million. The place is very small: it only takes about five minutes to drive from one end of the city to the other. There are no schools, no cops and hardly any local jobs. When the city first started talking about opening up a pot shop, they hired a consultant from Colorado who told them that a cannabis retail outlet would bring in about $4 million in revenue a year. After operating costs, that would still be an enormous windfall for a sleepy place in rural Washington.

But getting a successful marijuana business off the ground is no easy task. Weed entrepreneurs cannot take out conventional loans because pot is still federally illegal, so the Cannabis Corner was forced to borrow money from private individuals at high interest rates. And for reasons that remain somewhat opaque, the Cannabis Corner ended up leasing a local building at a rather absurd price for the area. At the time the store was being put together, however, these financial burdens did not seem to be as significant as the projected profits.

“People had it in their head that this was gonna make so much money, so they made so many poor decisions,” Stevens says. (As mayor, Stevens was not personally responsible for the business operations of the shop. That job falls to the director of the public development authority, which is technically separate from the city, largely to shield the city from legal liability.) 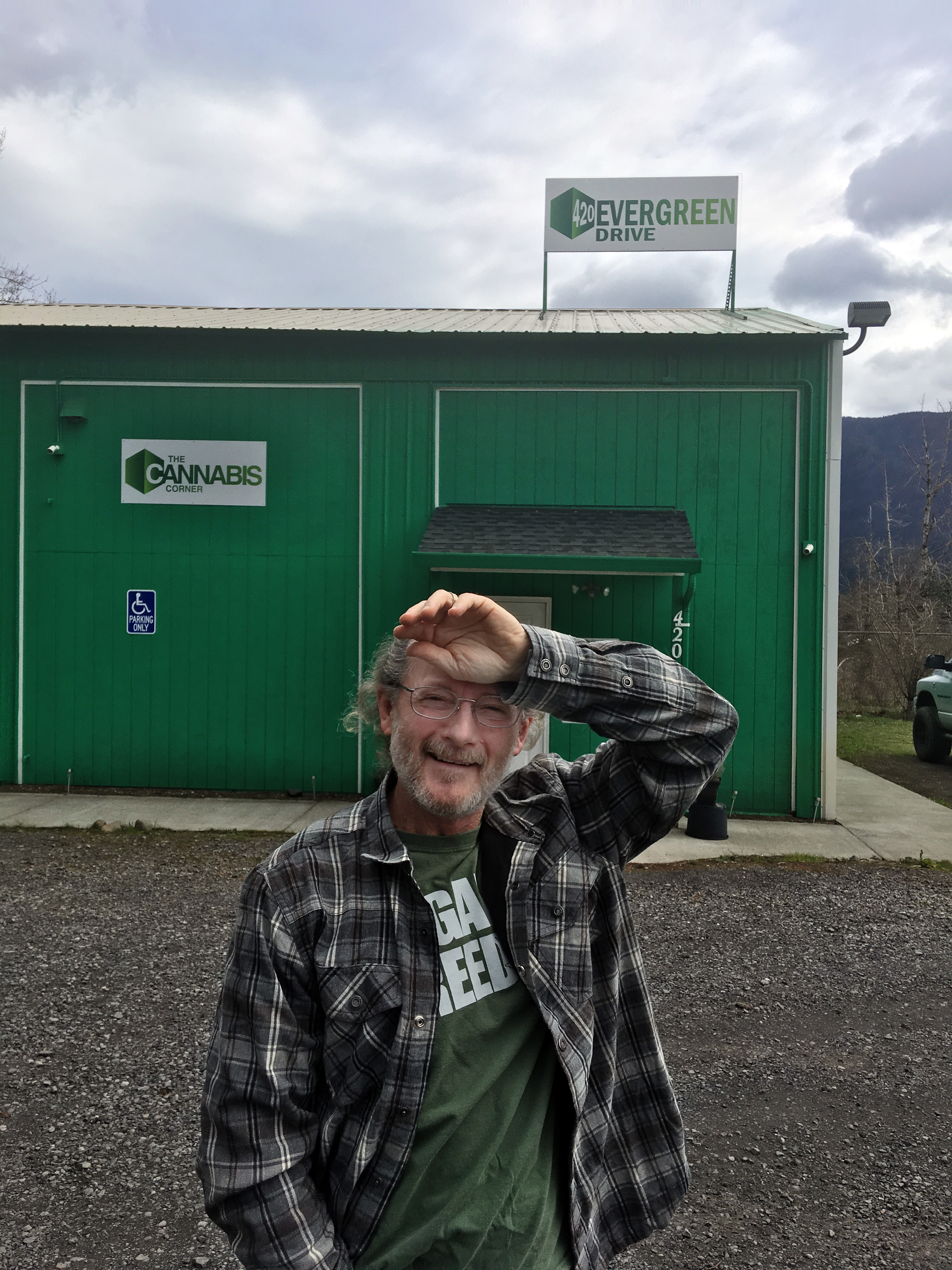 Then, a series of things went wrong. The town had been counting on foot traffic from tourists visiting the local hot springs, but the place got new owners, who turned it into a rehab center. Last summer, the Eagle Creek Fire shut the roads down for a month right around Labor Day, which is usually the area’s biggest visitor weekend of the year. And ultimately, as is often the case in the cannabis industry, the consultant had given the city projections based on marijuana dispensaries located near far more people.

Now, the Cannabis Corner is taking in about $1.5 million a year, and spending most of that money paying rent and paying down its loans. The city has hardly seen a windfall.

“It’s not working the way they said it was going to work,” says Sabo, the new mayor.

Stevens, on the other hand, thinks that Sabo is being too hasty. The Cannabis Corner just needs a few more years to pay off its debt, and then the city will start taking in between $75,000 and $100,000 annually.

“It’s the difference between scraping by and getting a new public works truck,” he says. “The mayor and some of the council don’t have the big view. It’s Twitter brain: ‘If I can’t get it in five seconds, it sucks.'”

About half of the people who live in North Bonneville shop at the Cannabis Corner – including a good number of people who attend church with Sabo. The rest either dislike cannabis or don’t quite care one way or another, if a quick straw poll of the gruff, flannel-and-boots wearing folks picking up their mail at the post office means anything. But even the guy who tells me he thinks the shop “sends a bad message to the kids” felt like if the town made enough money off of it, the whole experiment would be worth it.

And there, of course, is the irony. If the point of having a government-owned pot shop is to eliminate the profit motive that might encourage some people to smoke too much, the government of North Bonneville seems to have missed that memo. The only reason Sabo hasn’t already sold the Cannabis Corner is that the city needs to wait until the summer of 2019, when the lease on the building is up, to regain the ability to sell the license themselves and therefore make a few hundred thousand dollars off of the entire endeavor.

So if the only existing example of a government-owned marijuana store seems to be just as driven by financial gain as any entrepreneur, doesn’t that undermine the whole point?

“Yes, nonprofits can also misbehave, but I just think you have a better shot at having them not be too aggressive about promoting consumption,” he says. “If North Bonneville is screwed up, I wouldn’t give up hope, because it’s so small. It’s just an excuse for thinking about this as a broad approach.”

A much bigger and more significant test of the idea will begin later this year, when the Canadian province of Ontario plans to roll out a chain of government-owned marijuana stores. At least until then, North Bonneville will hold onto its position as the world’s only city-owned pot shop.