“Let’s talk about the phenomenon that is Donald Trump,” said Dana Carvey, opening his latest stand-up special, Straight White Male, 60. Released on Netflix just days before the presidential election, the set’s first line prompted shouts and jeers from Carvey’s crowd. This was obviously not an isolated incident. In October, a reported 200 people walked out of Amy Schumer’s show in Tampa after she condescendingly interrogated a Trump supporter she’d welcomed onstage. Then, the weekend after the election, Wanda Sykes was booed in Boston at a charity event when she called Trump an “orangutan.” But as contentious as it’s been for big-name comedians who broach the subject in their act, club comics across the country have found themselves in vulnerable positions as well.

Surrounded by crowds who might find them less recognizable than their third cousin at a family reunion, club comics in the time of Trump are trying to find the right amount of bipartisan funny in their political commentary – while at the same time looking to remain on the cutting edge with timely material, and ensuring that audience members are comfortably enjoying themselves.

“The political fuel that has been injected into comedy has been so much more abundant during this election season,” says Los Angeles comedian Aida Rodriguez, who’s been performing for nearly a decade. James Mattern of Queens, New York, who frequently emcees shows in Manhattan clubs, agrees, adding that people were often quiet about their support. “Trump was like a guilty pleasure during the campaign,” he says. “You’d ask people in the crowd who they were voting for and if they said ‘Trump’ their voice got lower out of embarrassment.”

But since the election, Mattern, Rodriguez and other comedians have observed that Trump backers are much more vocal in clubs – intimate settings where comics can become the hyper-focused target of frustrations, pride and insensitivity. And after getting ridiculed in clubs throughout the campaign season, Trump supporters are lashing out in victory.

“They dare you to be the opposition now,” Rodriguez says of some Trump-supporting audience members she’s encountered. “They’re emboldened; they yell out shit they know they’re not supposed to say.” Rodriguez recounts a recent set when she referred to the President-Elect as “the guy from The Apprentice” and was told by someone in the crowd to “get the fuck off the stage.” Lately, Mattern says, he’s perceived a dip in comedy club attendance on the part of minorities. “If there’s a diverse crowd I’ll say, ‘Look at how different you all look! This is great that you’re all together.’ And of late I’ve had to kind of tweak it to, ‘Man, you’re really a diverse-looking bunch of white people.'”

“It’s felt pretty Civil War-ish,” says Brooklyn-based stand-up stage veteran D.C. Benny in reference to the push and pull between comedians and crowds of late. Benny says the Trump card is to be played at a comic’s own risk because bringing him up is the quickest way to lose an audience. “Unless you say something benign,” he observes. “Though it’s hard to say anything benign about Trump.”

Three days after the election, in front of a predominantly white crowd at a club in a wealthy suburb of Los Angeles, Helen Hong, an Asian-American comedian, began her set with: “Hey guys, does anyone know what to pack for internment camp?” Though Hong says that in the past she’s done well at that particular club, her opener was met with harsh boos and heavy groans. “I spent the rest of my set digging out of that hole,” Hong says with a laugh, adding that it was her mistake to start things off that way. “But for me [the post-election sentiment] was so fresh and so raw, I had to say something.”

New York-based comic Jon Laster says that, a week after the election, his personal frustration reached a boiling point when he performed at Gotham Comedy Club in Chelsea. When the evening’s sets – some of which featured anti-Trump jokes – were complete, a white, middle-aged attendee Laster casually said to him at the bar, “Man you were really funny, and you’re black!” Laster says he and the small group around him awkwardly waved the remark off. But the man wasn’t through. “Since Trump won the election,” he continued, “there’s a lot America needs to reconsider. We need to put that ‘politically correct’ stuff to bed; now I should be able to call you ‘nigger.'” Laster recoiled and admits he nearly punched the man, who quickly tried to apologize. Laster composed himself and left the club. 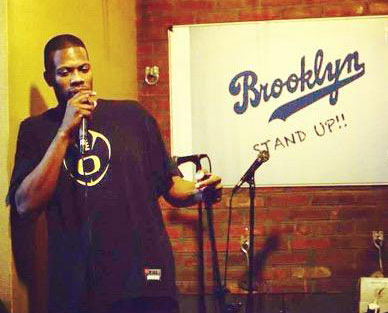 In a subsequent Facebook post, Laster wrote: “I’ve spent the entire weekend disgusted that we have to deal with this and disgusted that I didn’t break his jaw [and] it’s not an Alabama problem. These type[s] of Trump peeps are here in Manhattan, Williamsburg, in comedy clubs and on comedy stages.” He indicated he could easily see how he’d be perceived as “the bad guy” if he’d retaliated with a physical assault on an audience member in a comedy club, and added that black men are going to have to figure out how to deal with such out-in-the-open expressions of racism because incidents like the one he’d just endured are “the tip of the iceberg of what’s headed our way.” He asked others to write him with suggestions as to how to face such offenders because he doesn’t have “the energy or the desire to spend every weekend in jail,” nor does he “want to feel this mistrust of white comrades either.”

The incident shook Laster so much that he’s removed all political jokes from his act. “It’s just not worth it,” he says, adding that once he has more thoroughly contemplated the reality of a Trump presidency, and thoughtfully crafted new material, he may return to offering observations on the topic. “I don’t want to throw barbs out there, pissing people off without really adding anything to the conversation.”

William Stephenson, a long-time host at the Comedy Cellar in Greenwich Village, says his act has been altered because of the presence of Trump too. He can’t rely on a tried-and-true comedy tool when interacting with crowds: simply asking audience members where they’re from as an icebreaker. “Instead, what I do now is I say, ‘This is the part of the show where I ask some of you where you’re from,” Stephenson explains. “But I don’t want to know; you might be from the wrong state.'” He says crowds get the joke, but the new-fangled approach highlights that even an innocent question like “Where are you from?” could spark a slew of scenarios that will generate an unfavorable air in the club, and to perpetuate such a dark cloud of negativity is counterintuitive to the comic whose job is facilitate a fun night out. Stephenson says the person he asks might tense up, expecting him to “shit on them” if they’ve arrived to the club from Trump Country. Audience members or another comic could harass the person visiting from a red state and make them uncomfortable as well – even if they voted blue.

Still, the rise of Trump has compelled comics who have not typically ventured into the world of politics while composing material to do just that.

“We’re human beings first and we’re in front of hundreds or thousands of people a week, so we have to speak out about shit that’s just wrong, filtered through the art of comedy,” says Helen Hong, who’s only just begun to infuse political material into her act. Her new riffs onstage caught the attention of NPR – scoring her a gig as a panelist on Wait, Wait, Don’t Tell Me – and CNN, where she’s scheduled to appear on their New Year’s Eve year-in-review programming.

Ted Alexandro has toured the country with an act heavily reliant on political humor and social commentary for a number of years. He’s tackled topics such as police brutality and the Occupy movement on stage before, and he feels his concentrated approach is helpful in navigating the line between humorous and tastelessly subversive. “I always try and root my jokes in some kind of unassailable truth,” Alexandro says, “because then I’m not bashing someone just for the sake of taking a side.” This allows his material to have a better chance at playing well in a greater variety of rooms because, whether or not audience members revile or endorse whoever Alexandro’s zeroing in on, the joke can be judged as funny (or not) by all. For example, he’s been working on a bit where he points out that both Trump and Bill Cosby have rape allegations currently filed against them. Onstage, Alexandro points out that “Cosby isn’t even allowed to tell jokes anymore. But if he has any political aspirations … well, there’s good news.”

Feraz Ozel, a comic who was raised Muslim outside San Jose, California says his half-Pakistani, half-Afghani background works against him in comedy clubs. “People assume they know what side I’m on because I’m brown,” Ozel says, explaining crowds think he offers anti-Tump material strictly as a reaction the President-Elect’s statements against Muslim immigrants. Therefore, Ozel – who worked for Republican Arnold Schwarzenegger during his stint as California governor – is extremely diligent in researching facts for his bits, should anyone question his motives or the validity of his thought processes. Though that hasn’t stopped audience members from yelling “homeland security is outside” at him.

“I’ve just booked shows in Missouri and Kansas,” Ozel says, “and, for the first time, I’m thinking, maybe I need to get some brass knuckles.” Ozel insists he hates feeling that way – and asserts nothing violent has happened to him in those states or others nearby during his previous travels there – but he can’t help it.

Ozel adds one last observation about the president-elect’s impact on stand-up comedians – something each comic interviewed mentioned in one way or another as well: “I can sit here and say he’s ruined comedy for me, or I can use this opportunity to wake people the fuck up. And I believe that’s what I’m going to do.”