Back in the early 1980s, I was one of those annoying “alternative” British teens who, when pressed, would admit they quite liked “Wham Rap!,” which extolled the freedoms of unemployment (“I’m a soul boy! – I’m a dole boy!”), and acknowledged he was “really talented,” but essentially dismissed George Michael as “too commercial.” Which in the inverted snobbery of the era essentially meant “uncool.”

And also – you may find this rather difficult to believe – “too straight.”

Thanks to the massive influence of 1970s David Bowie (who also checked out this year), the early Eighties U.K. pop scene was queerer than Weimar Berlin on poppers. It was chock full of fabulously “freaky” stars like Pete Burns of Dead or Alive (another victim of 2016), Boy George of Culture Club and Marc Almond of Soft Cell. None of them were particularly out at the time, but then, looking the way they did they probably didn’t need to be.

By dazzling-teethed contrast, the disco-dancing, bird-pulling, Mr. Good Time persona Mr. Michael presented – but which seems to have been based largely on his Wham! partner Andrew Ridgeley – looked almost heterosexual.

Almost. OK, the leather jackets, the naked boy-flesh and the blow-dried hair looks très camp to us now, but that wasn’t necessarily the case at the time. George was officially very much for the ladies and the ladies were even more for him. But also, particularly as his success grew, quite a few straight boys wanted to be him. After all, his (white) soul boy image was a tweaked, glammed-up, sexed-up, slightly Princess Di version of what many wedge-sporting, Lacoste-wearing working class London and Essex lads were styling themselves at the time. And he was mega rich and famous and getting his leg over.

In one of those peculiar postmodern ironies that made masculinity what it is today – flamingly metrosexual – George Michael’s “closetedness” for two decades of pop stardom meant that straight women ended up expecting rather more from straight boys and straight boys ended up copying a gay version of themselves.

Michael’s multiplied image helped make ordinary male heterosexuality visually tartier, while his amplified lyrics helped make it more available emotionally. (A straight female friend of mine told me that every single boyfriend she dumped in the 1980s sent her lyrics from “A Different Corner.”)

George Michael was essentially the missing, subversive, and actually gay link between David Bowie and that other London pretty boy, David Beckham.

Even when a now-solo Michael “butched up” for the rather more “traditionally-minded” American market with his smash hit 1987 album Faith, the effect was … ambiguous. More so arguably, than the twinkiness of Wham! In the famous promo for the title single, he is wearing jeans, boots, a leather jacket and sunglasses in what looks like a homage to the previous year’s Hollywood fly boys hit Top Gun. But with a large crucifix earring and designer stubble (this accessorization of facial hair is something else “gay” he helped popularize.) 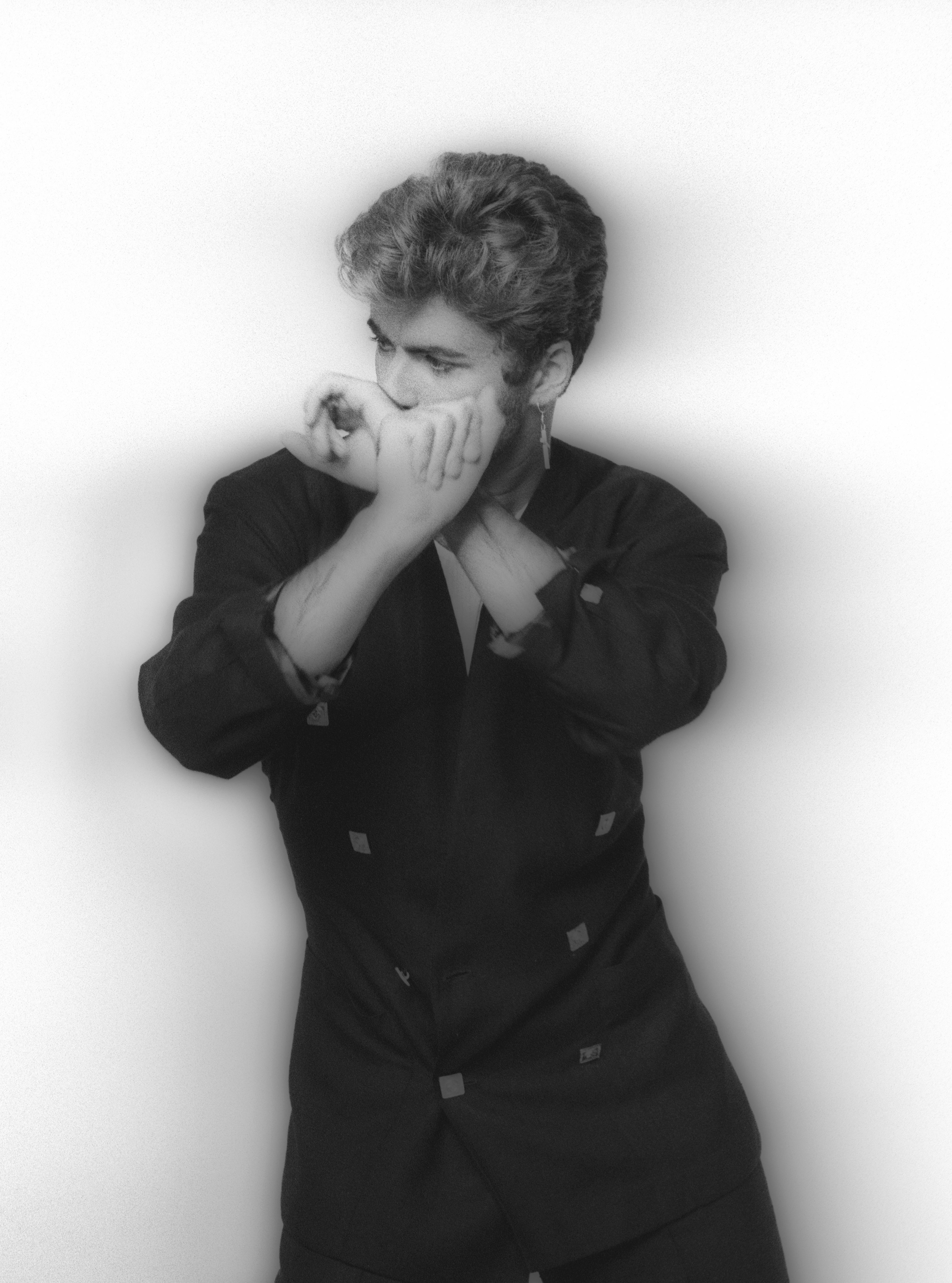 He’s next to a 1950s jukebox like the one in the Top Gun bar, wiggling his butt apparently trying to invent twerking, while the camera zooms in on it relentlessly (the word REVENGE hovering above on his leather jacket). Perhaps waiting for Maverick – or maybe Iceman.

This might sound like the wisdom of hindsight, but some contemporary gay boys were picking up the queer vibrations. An American gay male friend who was living on a military base at the time remarked: “He was the first teen idol that felt ‘gay’ to me even though he was always with sexy women in his videos. I didn’t even know what the gay clone look was, but he was sort of replicating it. The earring also seemed a signal – my dad said fags wore those, especially if it was in the wrong ear.”

George’s phenomenal success in the United States and the subconscious “down low” queer signals he was broadcasting in plain sight came, remember, at the height of the AIDS crisis and the foam-flecked reactionary backlash in the late Eighties against “satanic” and “sick” homosexuality.

Perhaps it was because of how he’d helped redefine heterosexuality for a generation, when he finally came out in 1998, toilet paper stuck to his shoe, a surprising number of straight people were still shocked – despite having been fairly explicit about his orientation in the lyrics and dedications of his songs for most of that decade.

Though of course there is another piquant irony to be had in the fact that this man whose career had originally been based on “masquerading” as a heterosexual was finally outed in a public restroom by a plainclothes Beverly Hills Police Department officer who (George claims) was masquerading as a gay man.

However, the way George handled that incident was so defiant and assured that he completely turned the tables on not just the Beverley Hills PD and the tabloid press, but also homophobia itself. He immediately told the world he was gay and refused to display any shame.

Instead, he released “Outside,” a jaunty single extolling the pleasures of outdoor sex for everyone, regardless of sexuality – along with a video that featured cross and same sex couples getting it on in hidden away outdoor places, while being recorded by a police helicopter. George in gay cop gear disco dances in a public restroom where the glitter balls descend from the air vents and the urinals revolve. In many ways, this was the absolute zenith of pop music as propaganda for pleasure and against shame.

What George achieved with “Outside” was nothing less than historic. That original pop star Oscar Wilde had been convicted of Gross Indecency a hundred years earlier and been completely destroyed by it. George had turned his own “The Ballad of Reading Gaol” into an all-singing, all-dancing commercial and cultural triumph.

Now that he was out, New Millenium George still refused to “go quietly” and “make it easy on himself.” He was not what you might call a “good gay.” He had a longterm partner but was frank about the fact that their relationship was an open one – when most gay celebrity couples maintained a veneer of monogamous respectability, even though their relationships were often more open than a 7/11.

He remained true to the dream (and nightmare) of masculine freedom that male homosexuality can symbolize. For all his faults and increasing foolishness, he refused to become that most absurd and spayed of things a “role model.” He insisted that he remained a sexual being – unlike pretty much all other celeb U.K. gays in the Noughties. “Gay people in the media are doing what makes straight people comfortable,” he told the Guardian in 2005. “And automatically my response to that is to say I’m a dirty filthy fucker and if you can’t deal with it, you can’t deal with it.”

The tabloids thought they knew how to “deal” with it. In 2006 they sent a flash photographer to follow him to the famous gay cruising area of Hampstead Heath, a large park in north London – at 2 a.m. – and plaster the results all over the front page, along with oodles of hypocritical concern about his “sick” and “sordid” behavior and warnings/incitements that he “could get his throat cut.”

His reported response to the photographer when “snapped” was, however, pitch perfect: “Are you gay? No? Well fuck off then!”

Sexual jealousy of course was at the root of it all. The scandalously free availability of “no-strings” sex is an aspect of the gay and bi male world that many straight men tend to be very interested in, one way or another – and had been at the root of much of the tabloid attacks on gay men at the height of the AIDS panic. Gay men “deserved” AIDS because of their “unnatural” sex lives and their promiscuity. For having, in other words, too much fun.

One tabloid columnist from that era worked himself into a violent lather of indignation: “I can’t stand George Michael and every time he tries to laugh off another vile gay sex exploit I dislike him a little more … I’d like to give him a good kick in the balls. Unfortunately, he’d probably enjoy it.”

His continued, unapologetic – ahem – pride in his not always exactly wise life-choices remains invigoratingly rare in an age of safe celeb spin and public apologies as groveling as they are empty.

“I don’t want any children; I don’t want responsibility,” he told Time Out matter-of-factly in 2007. “I am gay, I smoke weed and I do exactly what I want in my life because of my talent.”

Michael’s earlier secrecy about his sexuality was criticized by many – including gay pop stars who didn’t come out until after their career was effectively over. Perhaps he could, as some have insisted, combatted the Transatlantic anti-gay tide by coming out in the 1980s or early Nineties. Or perhaps his career would merely have been ended, and with it much of his influence.

Whatever his reasons for staying in so long, and whatever the long term effects on his happiness, being “openly closeted” for so long seems to have been key to not only making Michael a commercially-successful artist but also a surprisingly subversive one.

And perhaps it also lay behind his determination, once out, not to go back into the biggest closet of all: respectability.

Mark Simpson is the author of Saint Morrissey.