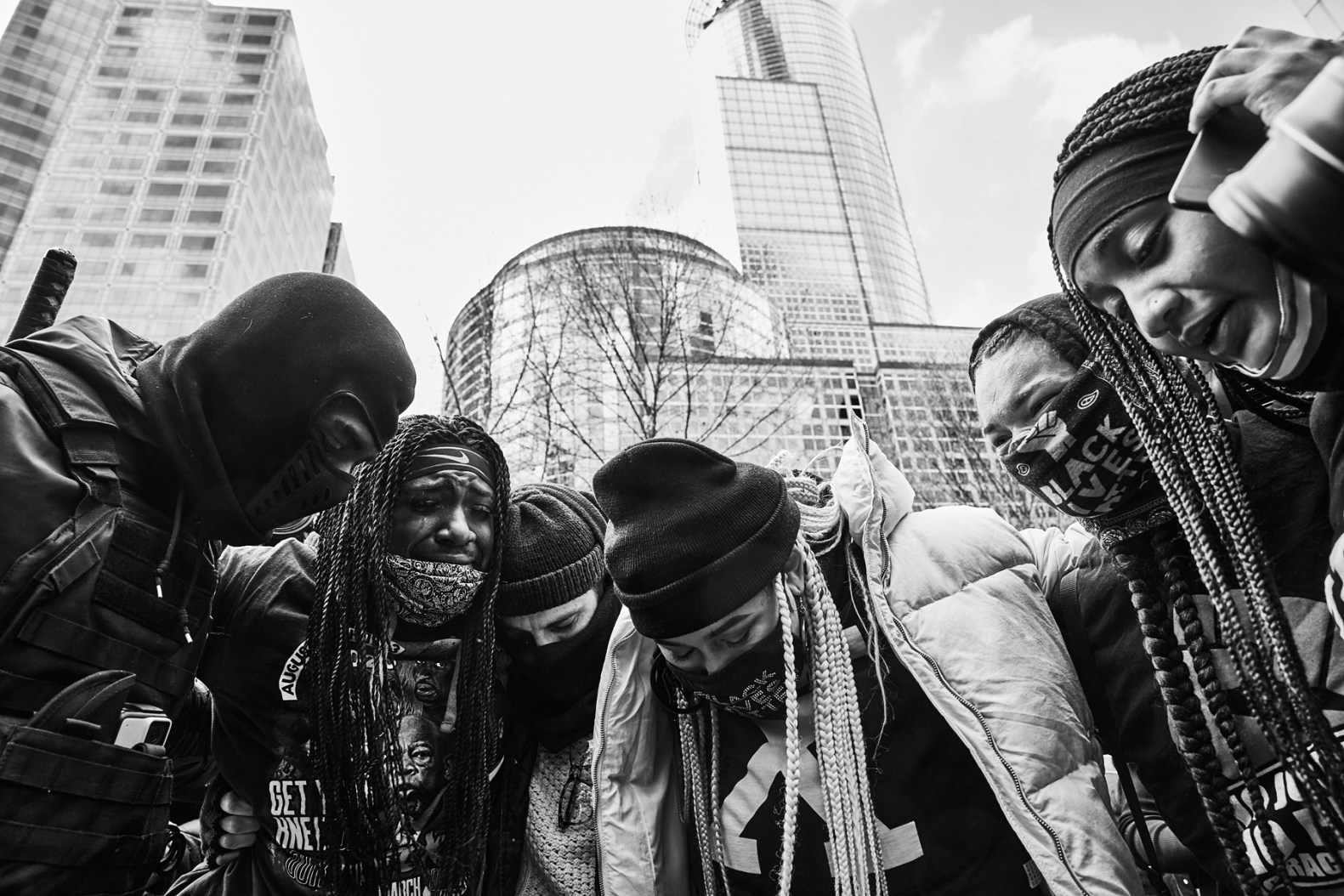 View Gallery
22 photos
People react as the verdict is announced in the trial of former police officer Derek Chauvin outside the Hennepin County Government Center in Minneapolis, Minnesota on April 20th, 2021. JD Barnes

The government center in downtown Minneapolis — where people gathered outside after the guilty verdict was brought down on Derek Chauvin for the murder of George Floyd — is sandwiched between skyscrapers. I look up at the buildings, taking in their pointless grandeur. I don’t often find myself in this part of the city. I’m never feeling empty enough.

The last time I was here in a meaningful capacity was for the Occupy protests in 2011. I didn’t mean to. I stumbled into it after a date, jarringly out of my element. Now, I’ve come as a writer on assignment. The crowd looks like it could fill a high school gymnasium or maybe half of a stadium. It’s not an all-white gathering, which gives it legitimacy. My phone buzzes in my pocket, and I ignore it.

I take my place behind a red car parked in the street and a mass of enthusiastic white people. The peaks of their cheeks and their wistful, reddened eyes are all I can see above their masks, with only a couple exceptions: a white man who looked like a plainclothes federal agent, and one woman with a plastic, see-through mask — lest we forget her face. Yards in front of me, a young black man zealously dances on a vehicle. Everyone is both celebrating the verdict or mourning George Floyd, Daunte Wright, Dolal Idd, et al., communing like a party and a funeral is happening simultaneously. These sorts of human contradictions are expected during extenuating circumstances.

A black man gives an impassioned speech, gruffly rattling off a list of conditions into the microphone that follow a carceral logic — counter to the abolitionism we have been demanding — but it’s what everyone wants to hear right now: “If you value black lives, you lift them up. If you value black lives, Kim Potter gets locked up. If you value black lives, everybody from the PCA that killed Dolal Idd gets locked up.” With every pronouncement, the crowd erupted in laughter and cheers and scattered mutterings of sideline chatter. Black power fists went up in the air from white men and selfies were proudly taken by white women. The unfussiness distinguishes it from the sort of theater I’ve come to expect from large Minnesota gatherings like our state fair and the so-called Mall of America.

Chauvin is the first white cop in Minnesota to be convicted of the murder of a black man. Before the uprising last year, racism was still naively seen by many white Minnesotans as a uniquely Southern problem. The illusory image Minneapolis has of itself is of an enlightened, hip city similar to Austin, Texas, or Portland, Oregon, but in my mind, living here feels like living in a fake town in a TV show. Even our beleaguered mayor, Jacob Frey, looks like Andy Samberg in poor, pixelated quality. Rapidly gentrifying since I was a child, Minneapolis doesn’t sprawl vastly like other metropolises. It’s contained, with its farthest ends zoned languidly within biking distance from each other. The rest of the state — outside of the metro area and its attendant suburbs — is unknowable and obscure to city dwellers like myself who don’t “have cabins up north.” We see the rest of the state the way the rest of America sees us, which is to say we do not see it. States like Minnesota are middling and sheenless. We’re known for having 10,000-plus lakes and Bob Dylan; more recently, high-profile extrajudicial murders of black men like Philando Castile, Floyd, Idd, and Wright. But we’ve come a long way since Chris Rock’s half-hour 1996 HBO special, Bring the Pain, where the comedian confidently proclaims, “Ain’t no black people in Minnesota. Only black people in Minnesota is Prince and Kirby Puckett.”

The double invisibility of Minnesota barely being real, and black people feeling unseen here, has led to a sort of estrangement and dissociation from our place of residence. But, if nothing else, it draws Minnesota’s black citizens closer. The novelty — and the charm — of being black in an overwhelmingly white place never truly wears off here. The universal black people nod, the knowing nonverbal communication cues we adroitly deploy in passing with each other. Through protest and through quarantine, these spontaneous, unselfconscious gestures of familiarity and kinship feel necessary for our survival.

We Met TikTok's ‘Scar Girl’ in Person. The Official Ruling? She Doesn’t Owe You Sh-t

‘Knock at the Cabin’ Begs the Question: Is M. Night Shyamalan Doing OK?

On the contrary, our white neighbors have honed a face of deliberate incuriosity — a face that doesn’t search like they’re seeing everyone they know for the first time or that they’ve known perfect strangers forever. That’s because white people usually crinkle and contort their faces into something illegible — and sometimes even close to blank — as armor. It’s divine intervention, then, that we’re all wearing masks now, so we, the black citizens of Minnesota, didn’t have to see the blotches of guilt and sympathy on white faces after the verdict of Derek Chauvin being found guilty was announced. Vulnerability doesn’t look the same on them as it does on us.

A sense of triumph and a tinge of staggering hopefulness, however premature or imagined, hung in the air last night. It’s the opposite of the inertia and emptiness I’ve come to associate with this city. My instinct is to trust that feeling, letting it illuminate the path ahead.