Torn pushes the door open. Inside, two round paper lanterns and strings of party lights draped along the wooden ceiling beams add warmth to the stark glare from a skylight. Yet concrete floors and a persistent draft make it an environment that encourages layering on more clothing, not taking it off.

Lee hands Torn paperwork as she settles at a kitchen table spread with goodies: fruit, bagels, chips and salsa, cucumbers, hummus, cookies and bottles of San Pellegrino. “It’s two pages, and just give it back with your photo I.D.,” Lee says, and sits down at a nearby desk. On the wall hangs a white-board calendar littered with Post-It notes, and California labor law posters.

Houston, who founded Pink & White in 2005, and Lee are the only two full-time staff members. Also working today are camera operators Aja and Tristan, both of whom did not want to give their last names.

While Houston and Aja adjust lighting on set, Luxe and Torn change into wardrobe. As Omarion’s “Post to Be” plays from a computer, Luxe emerges from the bathroom in a T-shirt, skirt, black floral stockings and Doc Martens oxfords. Torn pulls on a tight V-neck and a black-and-fuchsia houndstooth mini skirt over fishnets and platform shoes with ominous-looking buckles. “I like to wear a skirt mostly because of how you can rip it off,” she says. “If there’s a graceful way to take off pants, I haven’t found it.” 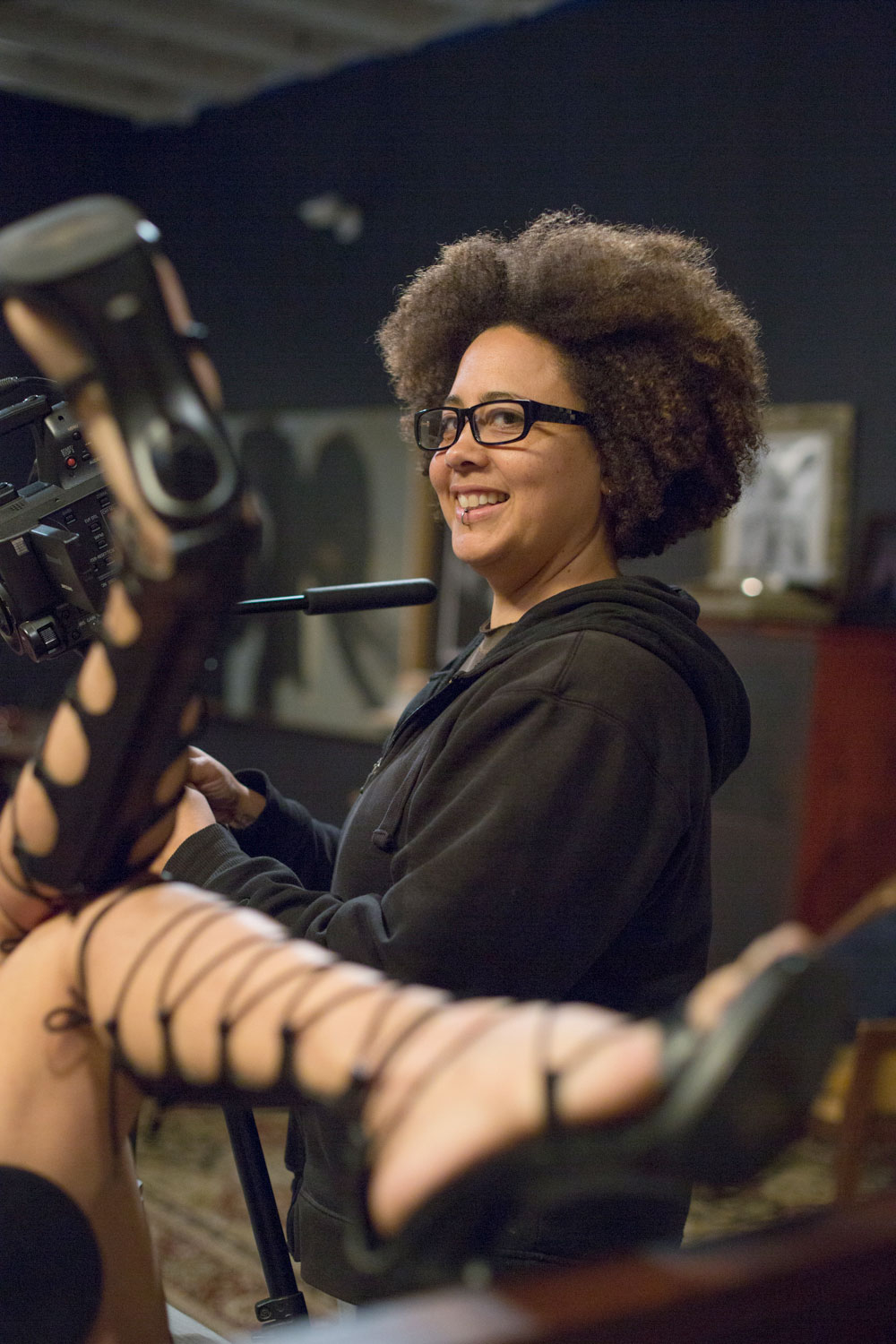 After Tristan shoots the performers’ profile pictures for the website, they sit down with Houston to plan their scene. She asks whether they have a plot in mind or want to go straight to sex. Torn and Luxe have the idea that Luxe is the shy girl from work who’s secretly into Torn. Houston suggests Torn open the door to the bedroom and invite Luxe inside. Then they’ll ad-lib a brief dialogue: “I’m so coy, no I’m not – I’m actually a perv,” Houston summarizes. “Once you get to the bed it’s all you. I’m not directing people, I’m directing cameras.”

Feminist pornographers agree they want to show real, diverse people having real sex and real orgasms, given that most pornography is not made with women in mind. In mainstream videos, the scene typically unfolds through the male gaze, and women are sex objects at best. 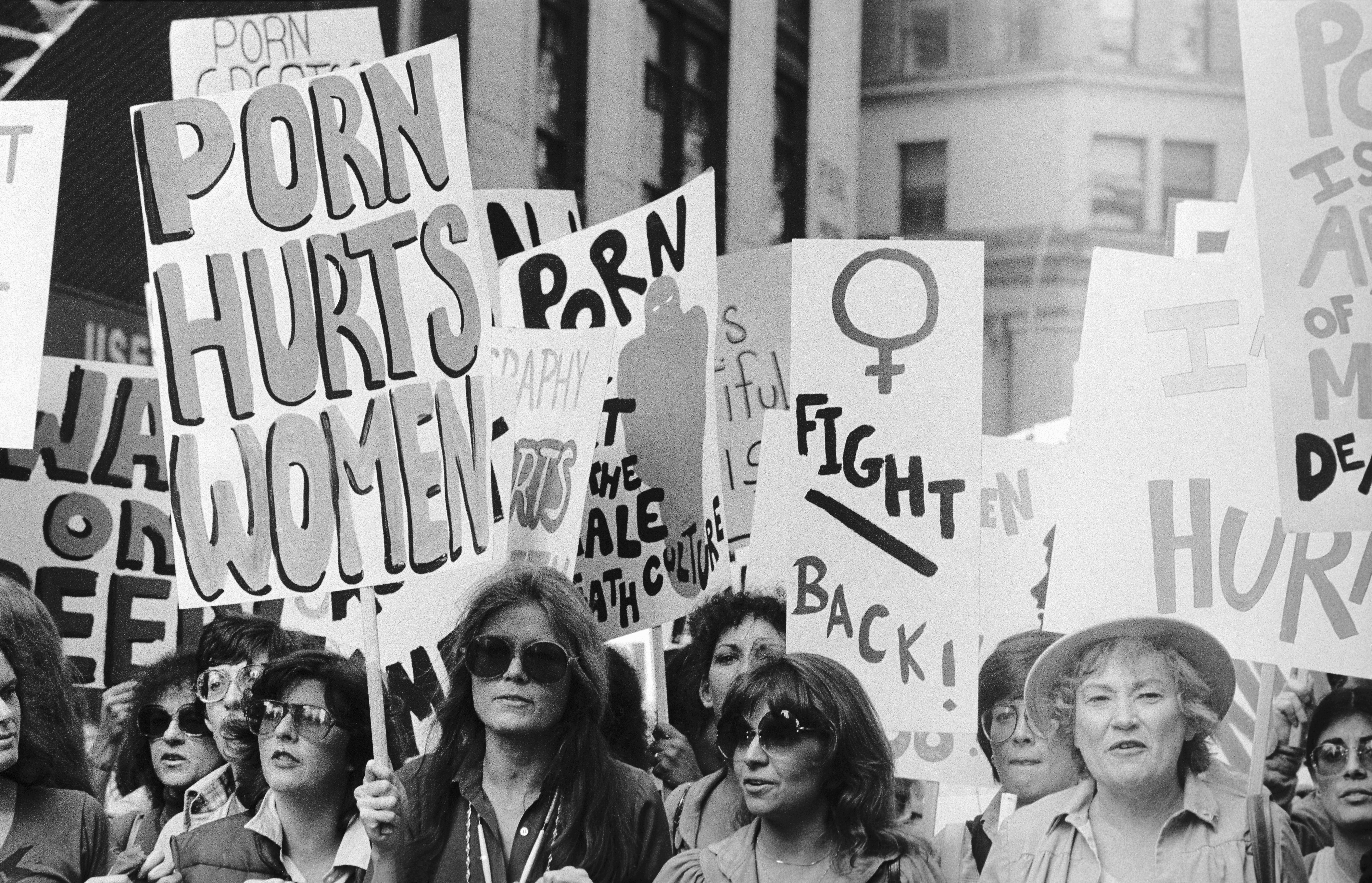 For Hartley, making pornography is her biggest act of feminism. She has performed in hundreds of films, both mainstream and underground, since the mid-1980s. She’s appeared in the Crash Pad Series, too, including a special 100th episode with Lee. 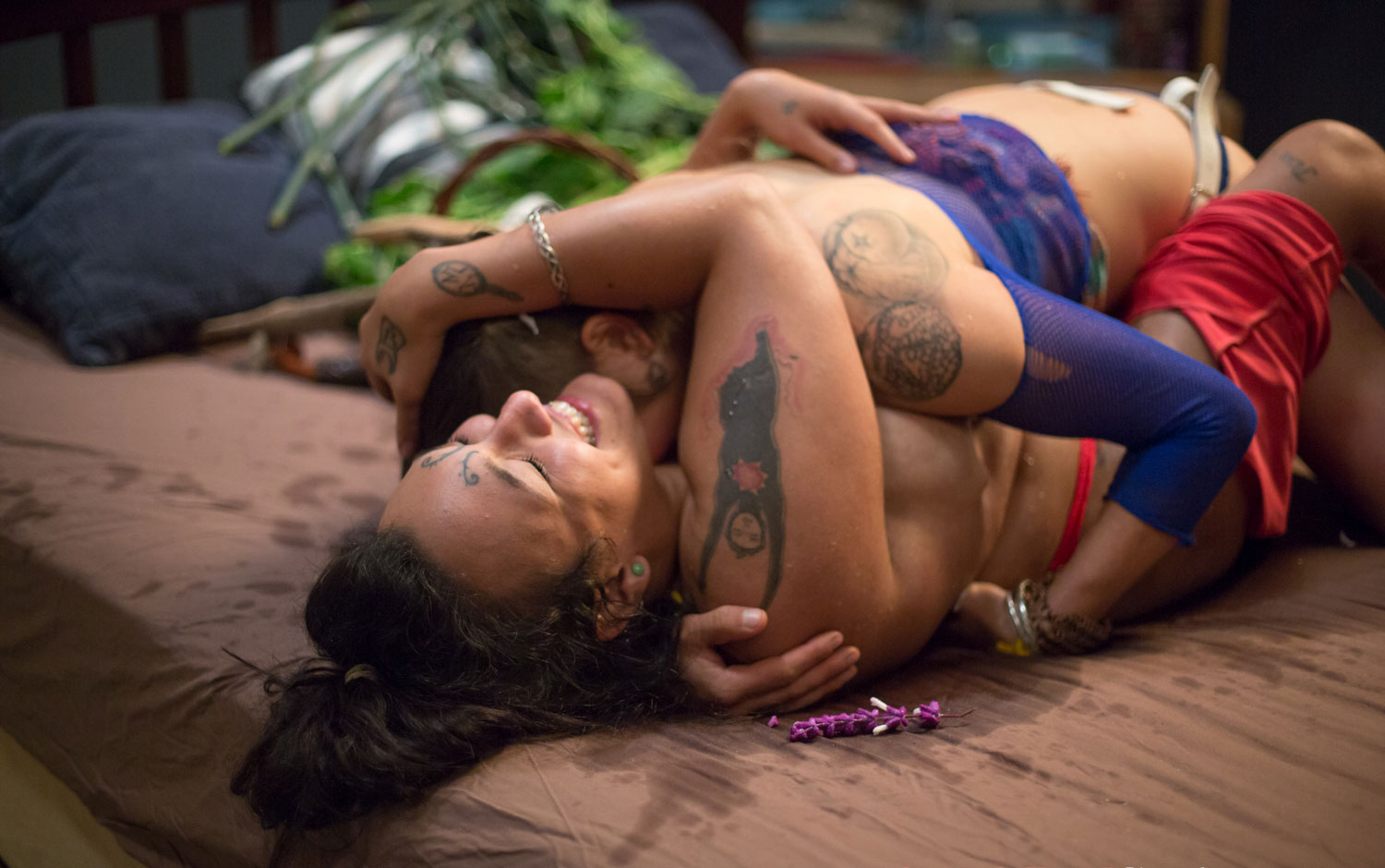 Other feminist directors have since added to the sex-ed genre with films combining practical instruction and pornographic fantasy scenes.

Two weeks before today’s shoot at Pink & White, performers got a call sheet by email. It confirmed the times (three hours for each scene, 30 to 45 minutes of which will be sex) and rates ($400 by check before performers leave the studio). It also asked about dietary restrictions (since Houston provides snacks) and invited performers to bring sex toys, from vibrators to strap-on dildos and bondage restraints. It advertised the studio’s cache of free safe-sex supplies (lube, condoms, gloves, dental dams) and offered arrangements for performers with disabilities, like a sign-language interpreter for a hearing-impaired performer and assistance for one in a wheelchair. It also noted that performers could pause or cancel the scene at any time.

Before beginning filming, Houston gives a quick safety spiel: In case of fire, earthquake or other act of God, use one of the two exits and convene in the courtyard so they know everyone is safe. In the scene, no blood, no feces, no crying, and try to stay away from closed-fist punching or hitting.

Before filming, Houston paces around two cameras on tripods, moving lamps and tweaking camera settings. Tristan stands ready to shoot photos. Aja rolls away the space heater that has been warming the room, and steps into place behind a tripod. 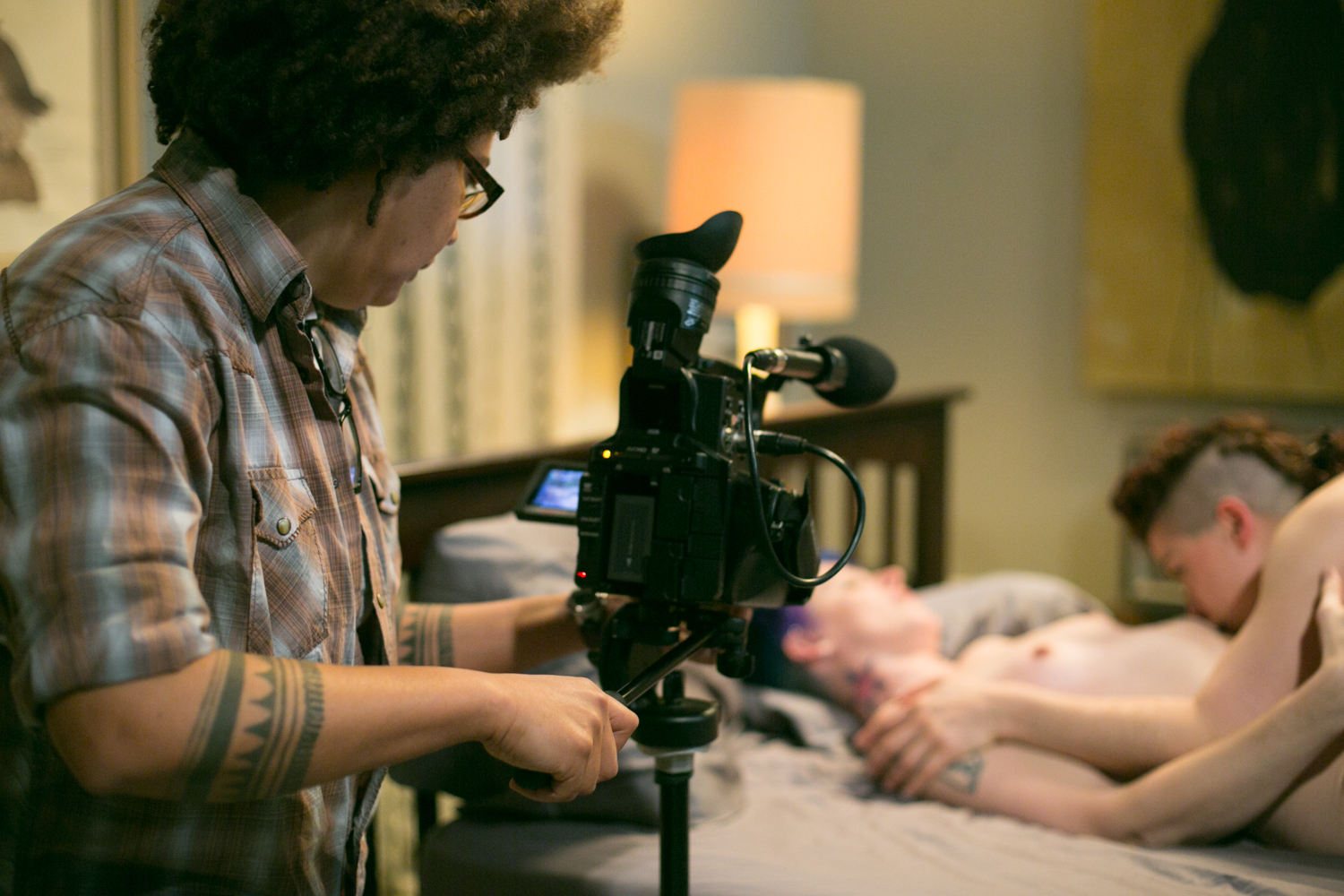 The performers wait outside the bedroom door; Lee monitors the live stream from the front desk. Tristan snaps a clapperboard for “Action.”

Feminist directors often collaborate with performers about what to do on camera, encouraging them to explore their own fantasies. In Houston’s series, performers are mostly on their own to come up with plots and to decide whether they want to ad-lib a few lines of dialogue or go straight to sex. They also have whatever kind of sex they want to.

Luxe has worked on sets – Houston’s is only her fifth shoot as a performer – where directors craft a scene around her preferences, but this represents a new level of freedom. “This is the first one where they are just like, ‘Go do your thing.'”

When Torn opens the door, in character, the duo breezes through an ad-libbed opening, sitting on the edge of the bed facing the cameras as Luxe admits she’s always had a crush on Torn, but “didn’t want to seem unprofessional” at work. As clothes start peeling off, Houston directs the crew with a hand motion to move to the other side of the bed.

When both performers are spent, they end the scene with kisses, then collapse into giggles after the cameras cut. “We didn’t talk about how to end it!” Torn says. Lee bursts in the door with two glasses of water.

Despite what laypeople may assume, feminist pornographers don’t always portray romantic stories that pause for gentle lovemaking. Often, anything goes as long as performers choose it and agree to it. A note on CrashPadSeries.com reads, “If you see a sex act on the site, it’s because the performers wanted to do it and the crew consented to film it.”

Hartley, on the other hand, insists that degrading is a relative term. People who find a certain act misogynistic are projecting their own preferences, she argues; she finds their attitude far more repulsive. “When it comes to consensual sexual behavior, a lot of that is self-identified,” she says. “I am not identifying as someone who has been degraded or demeaned by having someone put semen on my chin.” 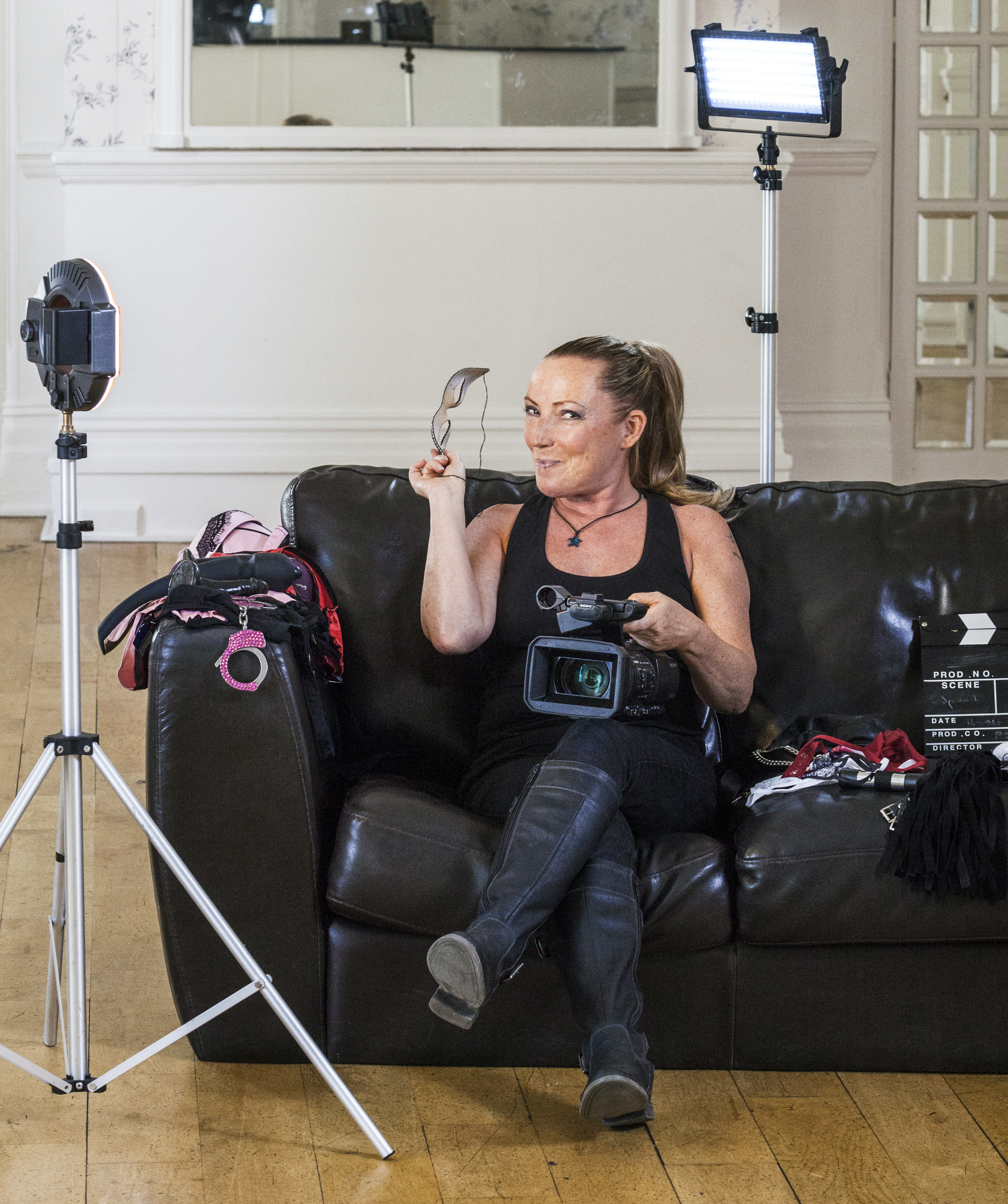 Although the feminist porn world offers a cozy and sheltered niche for its practitioners, looming financial realities raise questions about how long the genre can last. Last year, Joy created an Indiegogo crowdfunding campaign to try to raise £6,000 (today about $7,500) for postproduction on her seventh movie, Come Together, which premiered in February. The film encompasses four short stories: “Genderfuck,” about gender-fluid sex; “The Lesson,” in which a couple experiments with dominance and submission; “Blue Belle” about a woman who makes love to nature; and “Honey, I’m Home,” where the stay-at-home husband pleasures his wife with food and sex; Donations fell far short, however, and Joy wound up paying for the film the way she usually does: with a bank loan.

Joy treasures the artistic freedom of being an independent director, which allows her to make more avant-garde work. But hiring a cast and crew at a day rate means that shooting a single scene over a weekend can cost $5,000, she says. Once a film is complete, she estimates she needs to sell at least 10,000 DVDs to make a profit. She’s recently launched a streaming site, but doubts she can generate enough profit online, either. 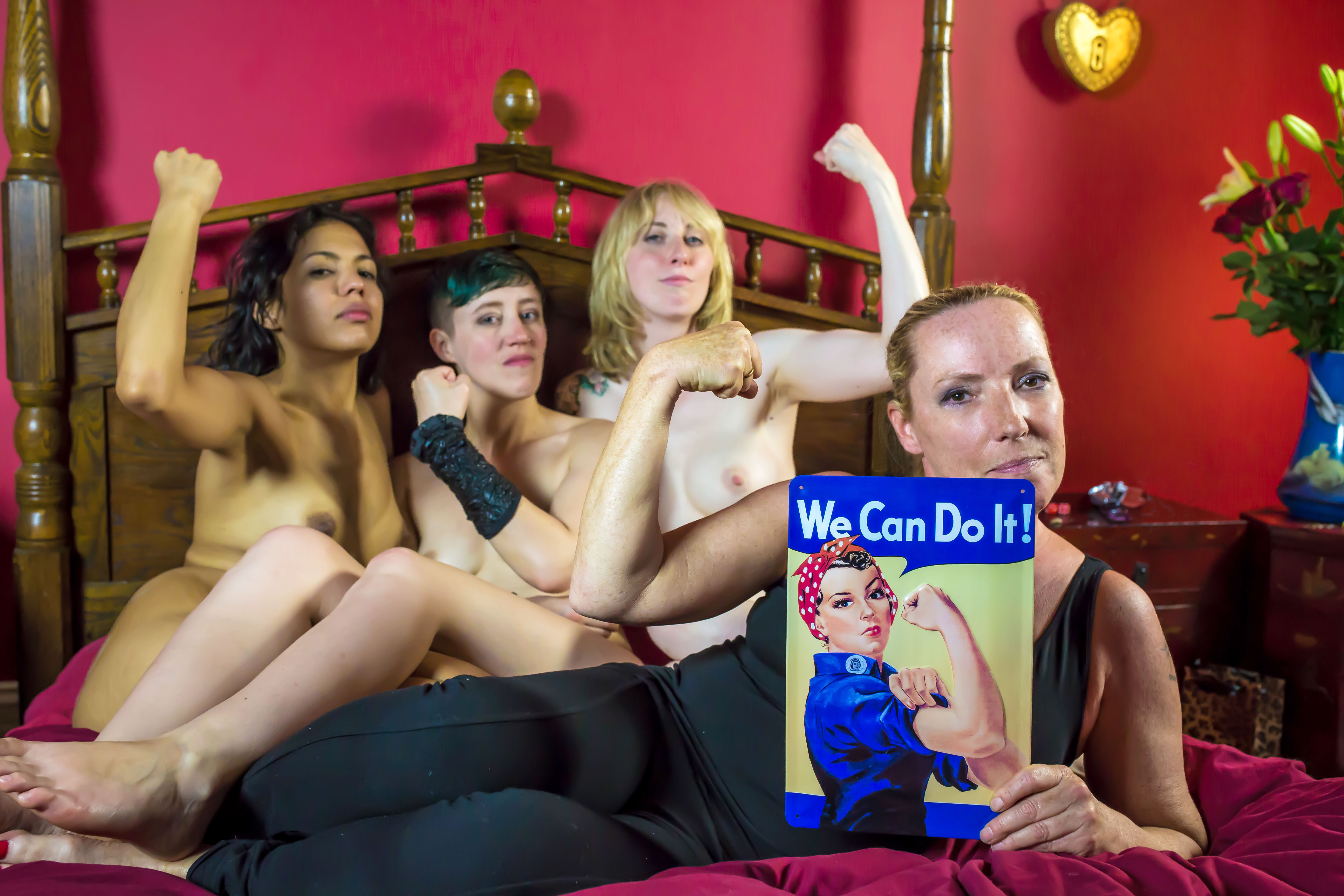 Accordingly, Taormino hasn’t made a film since 2013. “I haven’t announced my retirement, but I haven’t been shooting and don’t have plans right now.” Instead, she’s focusing on her work as a sex educator. She hosts the online radio show Sex Out Loud on Internet radio network VoiceAmerica and gives talks at colleges.

Jansen hopes so, too – but she’ll need to revamp it. “We’re going to figure out how we can do it where it at least breaks even,” she says.

Jansen acknowledges “feminist” doesn’t fully cover the range of films it has come to represent. Maybe the event will return as the Intersectionalist Awards, she jokes. But that doesn’t exactly roll off the tongue.

Avoiding staged dialogue, they just start talking and touching each other, Vai in an armchair and Seal in the wheelchair, before moving to the bed. Seal is leery of the nettles, but Vai lies on a pile of the leaves until an allergic reaction causes red bumps to erupt all over the performer’s back and arms. “You’re so beautiful,” they tell each other repeatedly, caressing and stroking each other’s arms and chests.

“That is the realest shit I’ve filmed in a while,” Aja says as Houston and the performers prepare for the post-sex interview.

“That was my intention,” Vai says.

Seal asks for a towel. The bed is soaked. The room smells like a garden.