The host opened the show by talking about how he could spend the rest of his life in China, and still die ignorant.

“Hmmm, this guy is different. He likes us!”

“Oh, yeah, he knows what he’s talking about… real eater.”

It was the No Reservations: Asia, Anthony Bourdain’s 2006 two-hour special that brought my entire family together for the first time in front of a TV since I’d moved out of the house. We were all apprehensive as he trekked through our motherland, anxious and worried about whether he would appreciate it. For a lot of immigrants, there’s shame when your third-world homeland is seen through a Western lens on national television. Most restaurants don’t want to be on camera for fear that they’re going to end up on Geraldo or god forbid some local news report about health code violations. But there was something about Tony that screamed, “I’m not like other white people. I’m not here to laugh at you.” He didn’t see dirty immigrants and aliens; he saw fully formed 360-degree humans containing old ways and wisdom manifested in food.

Marky Ramone Remembers Anthony Bourdain: 'He Was a True Punk'

Remembering Anthony Bourdain: The Man Who Ate the Cobra Heart

It wasn’t just immigrants and foreigners that got the Bourdain treatment either. Tony revealed layers and gave shape to sketches of people in our own American backyard that are grossly misunderstood. Whether it was the Ozarks or the Rust Belt, no one was as agile across the aisle as the human cigarette who shot guns with Ted Nugent and dined with Obama in Vietnam. But he didn’t let people off the hook either.

If he had a premonition that your reasoning stood on shaky ground or that your anger was misplaced, he intuitively got closer and offered a meal. Food was his equalizer – a seemingly innocuous hard-hat activity that set the table for thoughts and revelations traditionally ignored by mainstream journalism. He’d wind his way into your personal space, taking note of the things you held close, and slowly but surely offered other ways to hold them.

Tony was the most generous and loyal person I’d ever met after my best friend, Raf. I remember the day in 2010 that I got a call from Helen Cho, Tony’s longtime right-hand, secret-weapon and ear-to-the-streets, who told me he needed someone to do a talk at Barnes & Noble.

“Now. Union Square. Can you make it?”

I was playing ball on Houston Street in an aquamarine T-shirt and ran as fast as I could yelling to my homies, “It’s Tony Bourdain, b! I gotta go!” Seventeen blocks later, I met the god.

I had no business being there – just a loud mouthed kid selling baos on Rivington Street playing ball between shifts, telling anyone and everyone who’d listen that Dipset was the greatest. He fucked with me though and put me on his show The Layover.

When he came to shoot at my restaurant Baohaus, I got my Dipset T-shirt washed and pressed a week before, because I wanted him to know we same same, but different. Tony had Johnny, Joey, Dee Dee and Tommy while I had Cam, Jimmy, Juelz and Freeky. Two generations of New York spelled out in serif, spilled out on Rivington Street.

When everyone from the Food Network to Eater to the ATF was sniping at me and I lost my second restaurant for selling all-you-can-drink Four Loko, it was Tony that came to save my dumb ass. He could’ve let the vultures pick me apart, but he didn’t. He went out of his way to do an extensive Q&A with The Observer about my behavior, blurbed my book and told me, “They will make more money if you shut up and suck the dick, but you just keep fighting! Don’t ever suck the dick! No matter how big and shiny it is, don’t fucking suck it!” 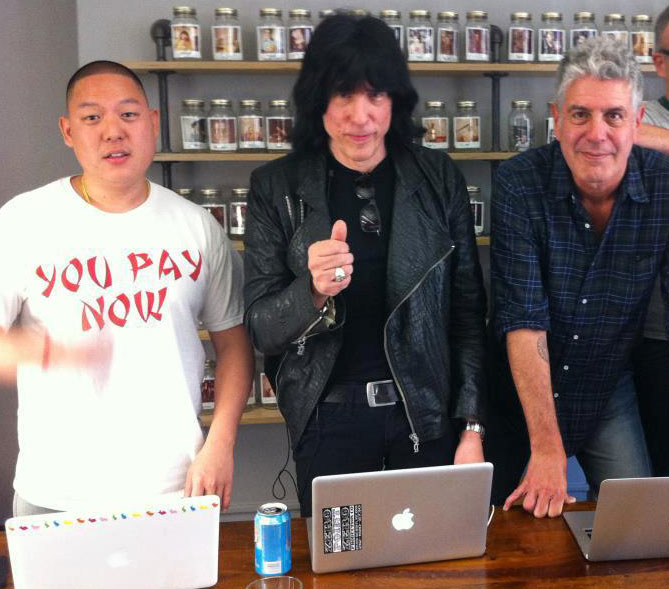 I’ve always followed Tony’s advice and later that year, I left a deal with Cooking Channel on the table and started my own show at Vice. From day one, the directive was to outdo Tony. His name was the name we all said in meetings, the field, the van, the edit and in desperate emails when we felt like we were losing. He was, is, and always will be the Michael Jordan, Hunter S. Thompson and Mick Jagger of this shit, and we all wanted to beat him. Yet, every time, he turned the other cheek, stepped up his game, and pushed all of us to get closer to the truth.

Most of my conventions on Huang’s World were created to try and get to the truth in a different way than Uncle Tone. We avoided voiceover, pushed to get more verité in-scene, used a glide cam, then a Movi, did more walking stand-ups, stayed in a youth cultural lane, avoided Michelin restaurants and established chefs. If he went up, we went down, whatever he left behind, we captured.

But the rabbit is gone now. You don’t realize how much someone means to you when you’re chasing them like a greyhound. They’re your inspiration, your role-model, your North Star. I don’t think any of us would be the people we are without Tony setting the standard not just as a writer, not just as a host or spirit guide, but as a human that always made it his duty to pick someone up that was down. He single-handedly made us care about each other all over again through food.

I don’t believe in God as told in books, but to paraphrase the poem “Footprints,” as told by Young Buck:

First there was two sets of footprints in the sand

Then there was one set of footprints in the sand.

When times get hard and shit hits the fan,

Tone didn’t walk with me he carried me man.