Eastern Promises: Inside the Bold New Novel 'The Way Things Were' - Rolling Stone
×
×

When you are seven years old, Salman Rushdie apologizes to your mother. As a Sikh and a noted journalist who’s received both death threats from extremists and come under scrutiny from the Indian government, she’s concerned to see her unique name appear in famous novelist’s latest book, The Satanic Verses. While you stand beside her, Rushdie tells your mother that he can’t remove the name Tavleen from the text; she’ll have to bear the weight of association with a fictional, female terrorist who blows up a plane. He scribbles his apologies in a bound proof of the book and as you walk away, the famous author tells her, “Don’t worry: It won’t be you that will be in trouble, it’ll be me.”

The Great American Internet Novel Is Here: Inside 'Book of Numbers'

Paul Beatty on Race, Violence and His Scathing New Novel 'The Sellout'

If this happened to you, as it did novelist Aatish Taseer, the encounter might have ballooned into epic proportions in your head. But for the deracinated child of the aforementioned journalist and a Pakistani Muslim who’d become governor of the Punjab province, it’s just one small illustration of a life spent navigating the blurred lines between art, politics and the personal. It follows that Rushdie’s books pop up in discussions and lies open, half-read, on the end tables of Dehli drawing rooms in Taseer’s latest novel, The Way Things Were. For one thing, he has a soft spot for that memory, which cemented the writer’s life to romance and danger in his mind. More importantly, the 68-year-old Rushdie’s works famously grapple with the end of the British raj and the fallout from India’s 1947 partition; the 34-year-old Taseer’s new title picks up during his generation’s postcolonial crises, beginning with PM Indira Ghandi’s 1975 infamous declaration of Emergency.

“It took me three books to just unravel all this personal stuff and put it away,” Taseer says. “This is my direct material, in some ways, but it’s not autobiographical. I was working in that nice, happy, pure space of the imagination.” Unlike the 2009 memoir Stranger to History, which mulls his relationship with his estranged father, Salmaan Taseer, or his 2011 novel, Noon, there’s little mention of the violence that plagued his family during those years. (Salmaan was killed by a member of his own security detail the same year Taseer’s half-brother Shahbaz was abducted.) Instead, this 565-page epic traces the dissolution of a marriage, and brings to mind many writers of the subcontinent — not just Rushdie or Rohinton Mistry but more recent names such as Neel Mukhurjee and Jhumpa Lahiri — who focus stories of national drama through familial ones. 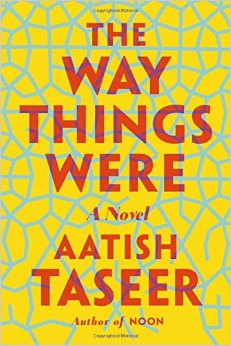 Upon the death of patriarch and Sanskrit scholar Toby Ketu, a.k.a. the distant and circumspect Maharaja of Kalasuryaketu, the academic’s son, Skanda, returns from New York to Dehli. Over the course of a year, while failing to complete the final stage of his father’s burial rites, Skanda is at once drawn to and immobilized by his familial past. As he visits relatives, entertains a new girlfriend and mulls over his own translations of an ancient Sanskrit poem, Skanda frames his parents’ story for the reader, episode by episode. Each of the three most important moments of marital strife coincide with conspicuously important events in recent Indian history including the previously mentioned Emergency, the anti-Sikh riots of 1984 and the 1992 destruction of the Babri Mosque in Ayodhya. While Skanda reexamines his past, the reader must recontextualize (or take in for the first time) these three contentious moments of upheaval.

The author’s desire to connect the reader to this faded, national culture is palpable. “I craved grounding,” Taseer says of his first impulse to study Sanskrit after a thoroughly Western education. “Imagine you had an ancestor you were connected with, civilzationally, and they had a full 1500 year old language, literature —an entire tradition, But you could go back no further than 50 years and your entire education was designed to steer you away from it. They were dismissed as local junk.” This connects him back to the British raj and its fallout: “This is what it is to be colonized. To have the curiosity taken out of you.

“We live in a strange time where history feels more alive than ever,” the author continues. “Whether it’s everyone wanting to bring back Ottoman Turkish or [PM Narendra] Modi in India doing yoga days and beef bans, or ISIS inflamed by this vision of a prophet.” When he stops to think about his own affiliation with Sanskrit and interest in reviving lost history, he adds, “I share a common drive with these people in some ways, but I part ways in that my interest is driven by an intellectual curiosity — if you are driven by chauvinism or an attempt to exploit the past, that will actually hollow it of any real meaning.”

This inquisitiveness, and Taseer’s dedication toward literary pursuits, have led him from any simplistic romance with history or the writing life and past his own “corpse in the cargo,” the difficulty with his father. The Way Things Were moves beyond earlier efforts and hints at a healing process that might be a way forward for India itself.