In the fall of 2010, cartoonist Sarah Glidden was planning a trip with her friends, but it wasn’t going to be a vacation. The group would be venturing to Syria, Turkey and Iraq to research and report stories on the impact of the Iraq war for American audiences.

“This was never supposed to be a book where I explain the Middle East, because I was not qualified to do that,” Glidden tells Rolling Stone. “I was going to report on the reporters.” The results of her trip were turned into Rolling Blackouts (out this month from Drawn & Quarterly press). It’s an ambitious, nuanced and sprawling work of graphic nonfiction.

Glidden’s travel companions – journalists Sarah Stuteville, Alex Stonehill and Jessica Partnow – run the online publication the Seattle Globalist, an independent nonprofit that focuses on international issues. They were joined by Dan O’Brien, a childhood friend of Stuteville and Partnow and an ex-marine, who agreed to go along in order to get a “fuller perspective” on the war. And in addition to her reporting for the Globalist, Stuteville would be profiling O’Brien’s return to Iraq for the Seattle Times. 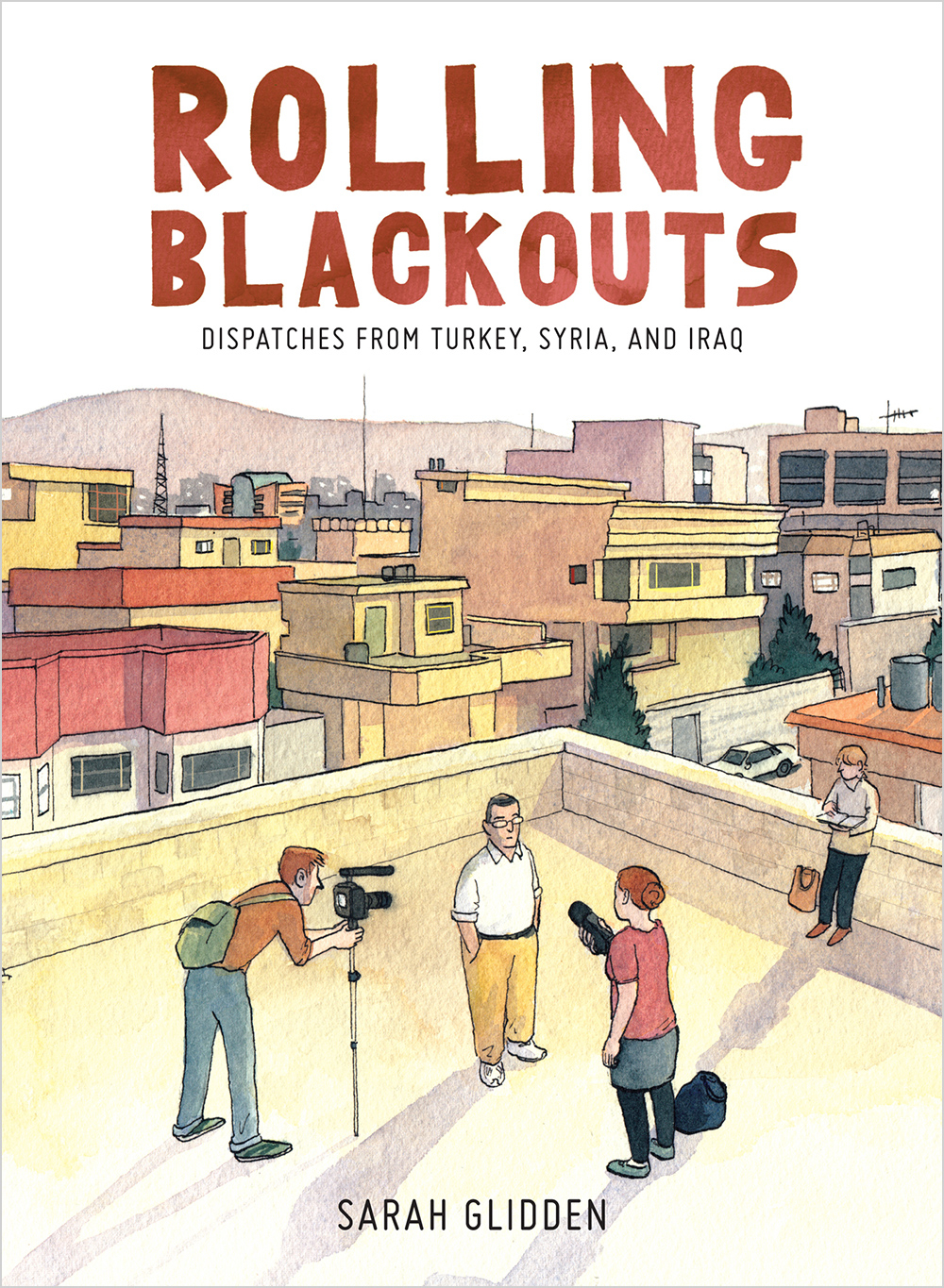 Though Glidden is no stranger to narrative nonfiction – she published a graphic memoir in 2010, How to Understand Israel in 60 Days or Less, which focused her going on a Birthright-sponsored trip to Israel and her skepticism surrounding it – this journey would be longer and require far more reporting. “I didn’t go to school for journalism, but I wanted to make sure I had done my homework,” she says. A couple of months before leaving, she sat in on a journalism class at the University of Washington and read what she could about the Iraq War, along with studying the ethics surrounding reporting on the war.

Glidden has a fine arts background, but she had only started reading comics in the six months before she went on her Israel excursion in 2007. She was inspired by comics journalism in the style of Joe Sacco’s acclaimed graphic novels Palestine and Footnotes in Gaza, and she liked the idea of bringing complicated socio-political issues to a wider audience through the medium. “Someone might pick it up because it’s a comic book,” she says, “And maybe that will get them interested in reading something a little more dense.”

Rolling Blackouts sits somewhere between reporting and graphic memoir: Glidden includes interviews conducted with locals and refugees about their experiences with the war, but also chronicles her own very subjective observations and asides. Wanting to be incredibly transparent about her process, Glidden details the way information is collected by her and her friends. She cringes while transcribing naive questions she asked during interviews, and she includes her surprise at the openness some subjects have with American strangers. Throughout the book, she records the personal and professional dynamics between her friends.

In one heated exchange that Glidden includes in the book, Stuteville is trying to get O’Brien, her longtime friend, to denounce the Iraq war. O’Brien agrees that the war had some disastrous consequences, but he won’t give her the answers she’s looking for. “The reason you probably sense I’m upset, is because in a good story, someone changes … and I’m sure that’s happened for you on this trip somehow and I’m just trying to find out how,” says Stuteville. “The only reason that you sense any tension from me is because I’m looking for that one storytelling angle.” O’Brien quietly answers that he really wants to meet more Iraqis. The recorder accidentally gets knocked off the table, Stuteville leaves in frustration and the room goes quiet.

Ethical media consumption, Glidden argues, includes understanding how the news is reported. “It’s easy to let information wash over you and not think about the people who shape the story,” she explains. This is a subtle thread in the book, and she goes a bit more explicitly into it in the interview. Glidden wants to remind everyone that a lot of trust is required on behalf readers – even with established news organizations – since data can be manipulated, contexts can be misconstrued and the facts that a reporter chooses to omit or include can radically alter perceptions of the current events.

In the book, the group does meet plenty of residents in Sulaymaniyah, a city in Iraqi Kurdistan, who are grateful for intervention by the United States military in the area, particularly in how they aided the Kurd’s defense against Saddam Hussein and his torturous regime. In Damascus, every Iraqi refugee they meet responds to America with hostility; many of them have been separated from their family because of the war, and almost all have lost their homes. Enough information is collected from both places that the American military can be framed as either heroes or villains in the story. Glidden includes it all.

Glidden’s companions hit no shortage of roadblocks during their work: stories fall through, sources contradict each other, information gets lost in translation. Glidden serves as a proxy for the reader, asking questions about whether these challenges are par the course in journalism. It’s the job of a reporter, her friends show her, to navigate which information is accurate and relevant, and to build an honest but compelling narrative around the materials with which they have to work. Rolling Blackouts goes behind the scenes into these decision-making processes.

“I do hope that, through this book, people are able to see the nuts and bolts that goes into making journalism,” Glidden says. “I see people on my Facebook feed passing around the most dubious information and, if you took five minutes to fact check the thing you were reading, you would see that this either a hoax or wildly incomplete.”

In the six years between Glidden’s trip and the publication of her book, the political landscape has changed drastically in the Middle East. She brings this up in the epilogue by including conversation with Stuteville, who responds: “The situation changing doesn’t make what they told us any less important.”

“I think especially for Americans, it’s important for us to not lose sight of Iraq and the refugee crisis that came from that,” Glidden says. “It’s connected to what’s happening now. It goes from being current journalism to being part of history.”