About halfway through Heidi Schreck’s 100-minute performance — a near-monologue framed around a constitutional speech competition she did when she was 15 — she wants to let you know that she knows that you’re not having a typical Broadway experience. “I wish we could have one of those spectacular set changes now,” she says to the audience, gesturing to the recreation of the Wenatchee American Legion Hall that surrounds her. “Like…those plays with incredible set changes.” She coughs. (“Frozen.”) “This is not that kind of show.”

She’s right, it is not that kind of show.

Schreck’s What The Constitution Means to Me is an exhumation of our founding document’s relationship to our bodies: black bodies, native bodies and especially women’s bodies. She peels back the stories of the women in her family, “the centuries of fucking inherited trauma,” as she puts it, and uses that legacy to examine the ways that our judicial system has failed over and over again to employ that founding document to protect people like them.

See a Preview of 'Broadway Bares: Twerk From Home'

The play is emotional, but it’s not tragic. Schreck is genuinely funny, and revels in the absurdity as much as she nurtures the trauma. The whole performance is in conversation with the audience, from small gestures — she’s careful to always say “bless you” when someone sneezes — to the moments of silence she takes to hear the audience grieve. It’s a play that says, throughout, “I’m listening to you, too.”

Chances are you’ve never seen a play like Schreck’s on Broadway — a seemingly improvisational almost-one-woman show about her family’s legacy of violence and the straight white men who perpetuated it — would likely have been considered “not commercially viable” five years ago. But the rules that have governed Broadway’s dollars for the last several decades are visibly shifting: Constitution opened two weeks ago for a 12-week run at the Helen Hayes Theater and, by opening day, it was already extended through the tourist-heavy summer months. And this could just be the start of it: Broadway producers are holding up Constitution‘s success to help guide other “challenging,” civic-minded plays into the these few, venerated theaters.

Greg Nobile, a Broadway producer and co-founder of Seaview Productions, is one of them. “I think that what Heidi’s play shows is that the narrative that we’ve gotten into — that women-led projects, or narratives that are challenging don’t belong in the canon up here — is just incorrect,” he says. “These audiences exist and wanna see these shows. We want to be challenged.”

When Jana Shea, a producer herself and partner at Nobile’s production company, was asked to be a part of Constitution‘s Broadway run, her first thought was “I want my name on that.” The last several years have seen record ticket sales on Broadway, in part because shows like Hamilton — the hip-hop retelling of our country’s founding — helped to expand the popular definition of “Broadway” as a genre and its audience. But Constitution, in both form and content, was new to this stage. “I think it’s the most unlikely title to ever go to Broadway,” she says. “Ever.” Becoming a producer on Constitution was an uncommon opportunity both to support women and to support a type of story that’s rare in this community. “It tells the world that you are a bold producer,” she says, “and you will take things that have a worthy message and make them happen.”

Part of its success could be attributed to all the discontented people hungry for something that resonates with them at a visceral level. While Michael Moore’s 2017 one-man show, Terms of My Surrender, was meant to plug into the angry zeitgeist after Trump’s election, it ultimately felt like it was preaching to Moore’s choir. Constitution, on the other hand, offers something that reverberates to a wider audience. The show was in its third week Off-Broadway at the New York Theater Workshop when Dr. Christine Blasey Ford testified against Brett Kavanaugh. “It was gut wrenching,” she told Rolling Stone during its original run. “I felt heartbroken that the play was suddenly so relevant, and I also felt angry that my play was now being written about and talked about alongside the name Brett Kavanaugh.” But it was that timeliness — not just with the Kavanaugh hearings, but the countless private, personal anxieties that blanket Trump’s America — that kept bringing audiences back. It was extended for a week, then brought to a second downtown theater, before it was finally announced that it would appear on Broadway.

If Constitution is the newest trailblazer, Nobile has been working with a play that he thinks could be right on its heels. Slave Play, playwright Jeremy O. Harris’ downtown debut, takes the audiences on a multi-layered, sadomasochistic exploration of racism’s impact on intimacy in the 21st Century. “I read the play and I thought it was one of the most extraordinary pieces of writing I’ve ever read,” Nobile says, and when he helped put it up at New York Theater Workshop this winter (while Harris was still in school for drama), audiences agreed. It was a New York Times‘ Critics’ Pick, and one of the fastest-selling shows in the history of the playhouse. “When we closed,” Nobile says, “Madonna was there; Anna Wintour was there, People magazine was writing about the lines around the corner.”

Slave Play is, quintessentially, what is perceived as a “Downtown” play. It’s kinky, it’s narratively non-traditional, it deliberately makes its white audience members reflective and uncomfortable. But, perhaps for those very reasons, Nobile believes it deserves a spot in Broadway’s lineup. To his surprise, the small community of elites who fund Broadway, agreed. “When I started to put some feelers out,” he explains, “the millions of dollars that it takes to bring a play to Broadway started to come together really quickly. People understood why this play belongs in the canon, and why Broadway should be telling those stories. And now we can find the audiences who want to come.”

Nobile’s greatest sticking point has been real estate: Broadway is really just a few dozen theaters scattered across 10 blocks in Midtown Manhattan. For that reason, space is limited, expensive, and typically risk-averse. “Most of the people that come to see shows on Broadway are tourists,” Nobile explains. “Those tourists love to see celebrities and love to see brands. They also want to know that the thing they’re spending good money on is going to be good.” But Nobile is confident that plays like What The Constitution Means to Me have started to reshape theater owners’ understanding of what’s “risky.” “It’s about believing in this paradigm shift in the stories that we’re telling in these sacred buildings,” he says. “The more that there are people that are creating work like this, and the more that they knock on the doors of the people who control the destiny of these plays, the better we are. It’s just another crack in the glass ceiling.” 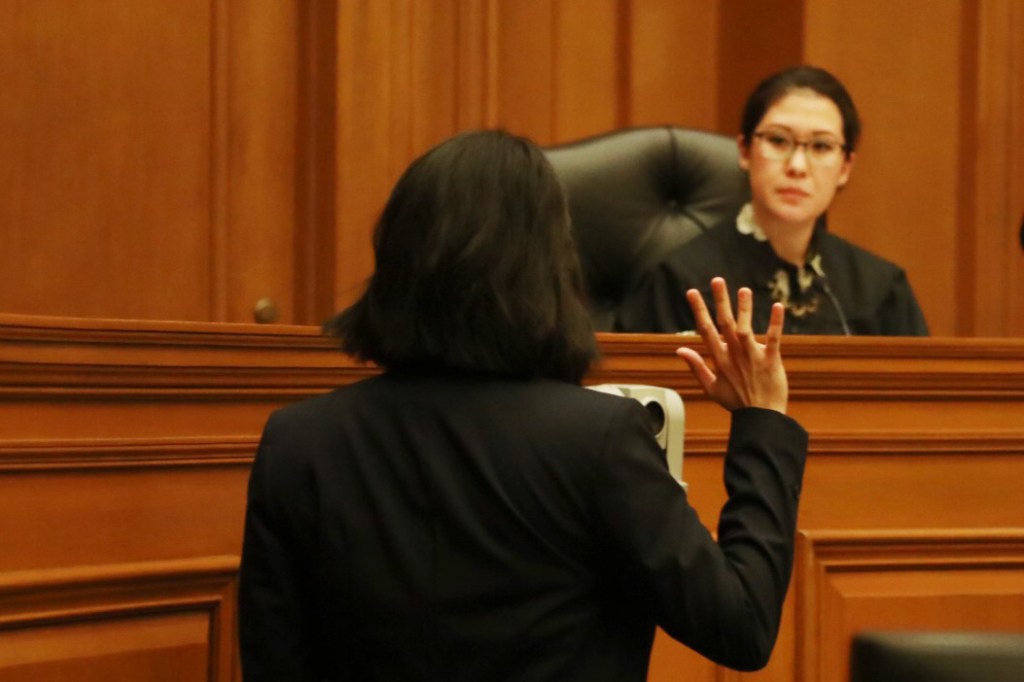 The shift of interest, attention and (most of all) funding on Broadway is arguably part of a greater pattern in theater history. As Nobile puts it, “there have been hundreds of moments where theater and Broadway were at the forefront of taking risks of social commentary.” Arian Moayed, co-founder of the civic-minded theater company Waterwell, has been working in political and socially conscious theater since 2002; he says “it comes in waves.” When they first launched Waterwell during the Bush era, they struggled to find audiences for their work for years. The emotional distance that people could take from wars that were happening thousands of miles away, he says, may have kept audiences from engaging with the work. “There just wasn’t any interest in it,” he says.

But in his most recent production, he’s seen that “not only has that flipped, but this kind of work is being rewarded again.” The Courtroom, a performance based entirely on the transcripts of one Filipina woman’s deportation proceedings, and staged in a real courthouse this past winter, has garnered nationwide interest from both theaters and legal communities — including a performance at the New York City Bar Association this May. While he’s the first to admit that we live in extraordinary times, he rejects the idea our engagement with political art is exceptional. “The reality is, that’s what the theater has always done,” he remarks. “When you look at the oldest pieces of text that we have, the Greek texts were literally responses to the world at hand.” Instead, he says, “I think in the last 20 or 30 years, we had strayed away from that.”

Lee Sunday Evans, Waterwell’s artistic director, has noticed a foundational shift within the arts community itself. “I think in the art world, political art and good art are sometimes seen as two separate things,” she says. “I think that to me what’s exciting is that more and more people are breaking down any idea of that binary. That really great art can also be really politically minded, in a sophisticated way that reckons with these important questions.”

When you’re in these audiences, though, you can also feel a more base, human draw to the shows that’s palpable in the room. Whether they’re talking about The Courtroom, Slave Play or What the Constitution Means to Me, everyone comes back to the notion of the public gathering. “We are in a really volatile political time,” says Evans, “and we need — we crave — public spaces, where we can go to kind of reckon with these really critical questions about how our society works.”

Heidi Schreck has felt the same urgency in the Helen Hayes Theater, from the moment she trots into the American Legion Hall in her bright yellow debate blazer. “People are desperate to be in a room together with other live human beings,” she says. “They want to process the chaos and pain we are experiencing in this country with other people instead of scrolling through Twitter in despair on their sofas. I sense a deep longing for community in the audiences who come to Constitution. They respond — loudly! They laugh loudly and sometimes I have to pause to get through stories because people are grieving loudly, too.”