Two years after his death and 50 years after the infamous murders he orchestrated, Charles Manson is still fascinating some and inciting terror in others. This time, it’s in the form of two masks of his likeness that reportedly contain his cremated remains, as well as human blood.

This unusual project is a collaboration between artist Ryan Almighty and mask-maker Rick “Sik Rik” Fisher, and although anything Manson-related tends to be controversial, this particular piece has drawn new levels of ire.

“I’ve gotten a lot of death threats,” Almighty tells Rolling Stone. “I’ve gotten a lot of hate from people who are actually Manson devotees.” In addition to upsetting Manson’s fans who found the use of his ashes disrespectful, he says that he has also faced criticism from people who “are superstitious” and find the whole project creepy and distasteful. “It’s a touchy subject,” he explains. “It’s a crime that happened 50 years ago, and there are stories of fact and fiction that go along with the whole thing.”

What Do We Really Know About the Manson Murders?

Inside the Murderabilia Machine

But this isn’t his first project using Manson’s ashes and human blood: in 2018, Almighty created a painting using the same nontraditional art supplies and sold it to Zac Bagans — host of Travel Channel’s paranormal investigation series Ghost Adventures —  who put it on display at his Haunted Museum in Las Vegas. Though that received some attention, the Manson masks have drawn an even bigger response. So what is it about these masks that crosses a line? Are they simply another type of memento mori — objects of mourning that also serve as a reminder of our inevitable death — or is it murderabilia gone too far? It all depends who you ask.

The origin story
Almighty’s connection to Manson began in the 1990s, when he learned that the career criminal’s autograph was going for around $100 if sold on eBay. “I heard that it was very hard to get a hold of Manson, as he got hundreds of letters — thousands of letters — a month, and that he was not only dyslexic, but his education was only through grade school,” Almighty explains. “So he’s not a very literary person. He’s very visual. So I drew a portrait of him and I sent it to him and he actually got a hold of me the first time that I sent him a letter, which I found out later was unheard of.”

Manson and Almighty spoke on the phone several times, where they discussed everything from the music business, punk rock, and Marilyn Manson, to his television program viewing options in prison — which he said included Mister Rogers’ Neighborhood, Sesame Street and Barney. After a few phone calls with Manson, Almighty lost touch with him, but tried to get in contact again a few years ago when he found out that Manson was ill. At this point, Almighty had done another portrait of him — painted in human blood — and wanted him to be aware of it before he died.

In addition to at least five different iterations of Manson, Almighty has also done human blood paintings of other figures like Divine, Edgar Allan Poe, G.G. Allin, P.T. Barnum, and Elizabeth Short (a.k.a. mysterious 1940s murder victim “The Black Dahlia”), as well as commissioned work. From a distance, the paintings look like realistic watercolors in varying shades of red and black. Up close, finer details emerge, thanks to a technique Almighty calls “splaturation.” He primarily uses his own blood for his paintings, as he did for the two Manson masks. “I just do it like a phlebotomist would,” he explains. “I use a syringe and I draw it. You’d be surprised how little blood actually takes to do a painting.” According to Almighty, he received the cremated remains used in the Manson masks from someone who attended Manson’s funeral.

Before working together, Fisher and Almighty were both fans of each other’s work and have been friends for seven or eight years. Fisher had been selling variations on the Manson mask since February 2016 — without the ashes — so he already had the mold, and wanted to do his take on Almighty’s blood painting portraits. Almighty traveled to Fisher’s studio in Akron, Ohio to collaborate on the project, at which point they mixed Almighty’s blood with Manson’s ashes and put them in the eyes of the mask.

For now, both Fisher and Almighty are each keeping a mask, though Fisher says that he’s not opposed to selling to the right buyer. “If someone feels that a project like this might be suited for their museum or for their collection, we would entertain serious offers to do more, but the idea isn’t to crank [them] out. This isn’t one of those zany shock cash-grab things,” he tells Rolling Stone. “We’re taking it pretty seriously and we understand the historical significance of what we have in our possession.”

Making true crime-related masks — like John Wayne Gacy’s Pogo the Clown and H.H. Holmes — is only only about half of Fisher’s business. The rest of his work is music-related, including officially licensed masks for Iron Maiden, Devo, and Motorhead, as well as Stephen Blickenstaff’s psychobilly character featured on the cover of The Cramps’ Bad Music for Bad People.

According to Fisher, the image of Manson featured on these masks is inspired by the December 19th, 1969 cover of Life magazine, and is most recognizable because of the unhinged look in his eyes. The photo is actually a mugshot from April 1968, former Manson Family member Dianne Lake wrote in her 2017 memoir, and was taken after the group was arrested at a campground in Sycamore Canyon for having fake IDs.

The controversy behind the mask
The backlash against the Manson masks began as soon as TMZ reported that they existed, starting in the article’s comments section and moving to social media. Among those who are opposed to creations is Andy Kahan, director of victim services and advocacy at Crime Stoppers of Houston who also coined the term “murderabilia.” 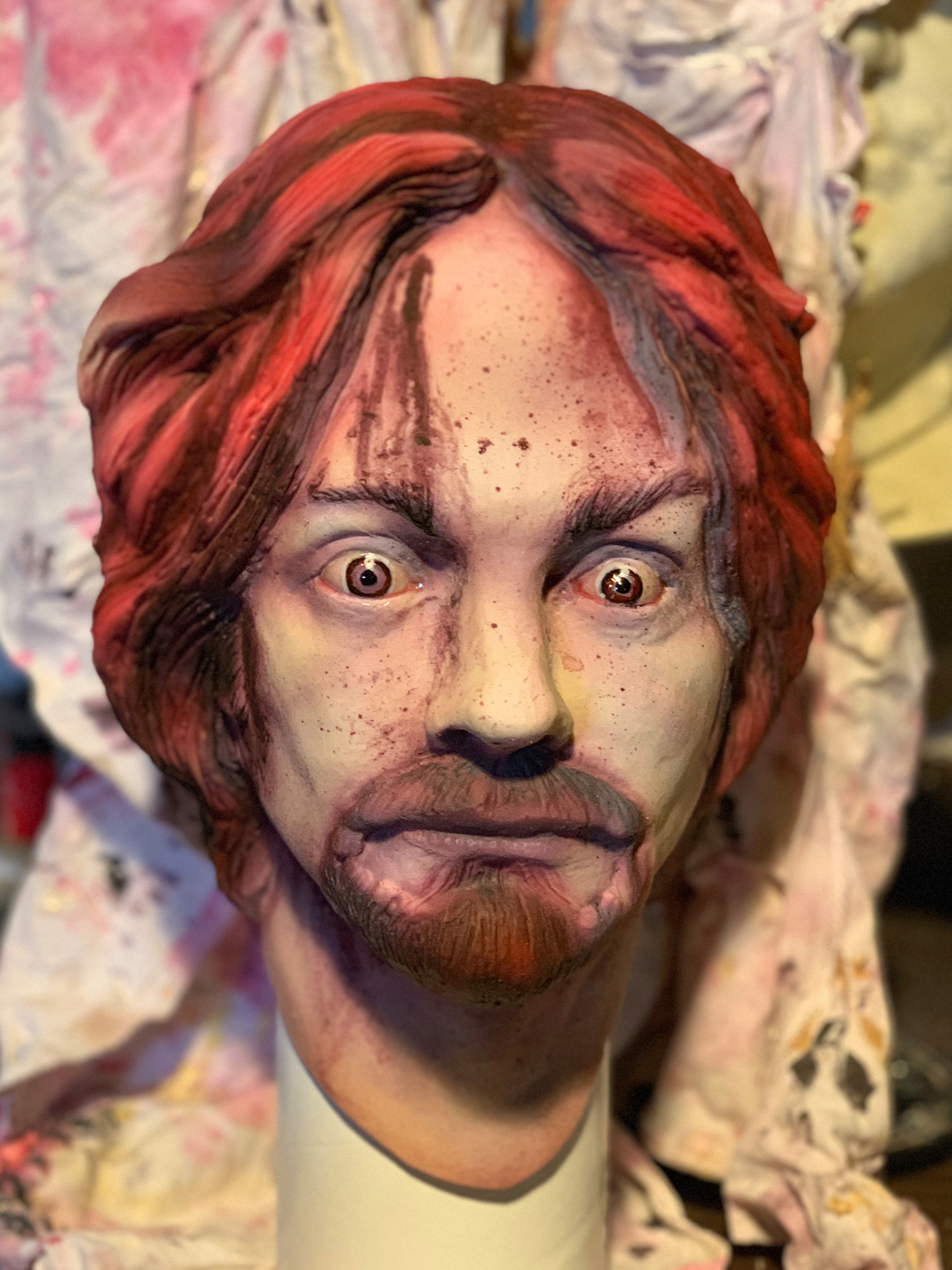 The creators of this Charles Manson mask say it was made with human blood, and sprinkled with the late cult leader’s ashes. photo: Ryan Almighty

“In my over 20 years of watchdogging the murderabilia industry, quite frankly, this is one of the most [sick] and depraved items I’ve ever seen for sale — and I’ve seen a lot of bizarre items,” Kahan says. “We continue to, for whatever reason, glorify cult leader Manson who was responsible for so many horrific murders, and yet we continue to give him immortality and infamy that he richly doesn’t deserve even after death, and [he] continues to be a larger than life figure.”

As Kahan describes it, there are two categories of murderabilia: personal items owned or created by a criminal or someone associated with the crime (everything from John Wayne Gacy’s paintings to locks of Ted Bundy’s hair collected off the floor of the room where he was executed), and manufactured items, like Jeffrey Dahmer dolls and serial-killer snow globes, both of which Kahan has seen. These Manson masks are unique because they combine elements from both categories. And Kahan thinks that even in a year saturated with everything-Manson — 2019 marked the 50th anniversary of the Tate-LaBianca murders — the masks containing Manson’s ashes take things one step further.

“Even though you might laugh and say, ‘Well, what a strange novelty item,’ keep in mind that this novelty item has so much death and destruction behind it and lives that were forever lost and taken as a result,” Kahan says.

Similarly, Manson friend and longtime collector Michael Channels finds the masks problematic. “The artists’ [are] treating the deceased’s remains in a disrespectful manner with total disregard to the decedent, his family, the estate of, and the process of the court,” Channels tells Rolling Stone. “They are clearly doing it all for profit and the narcissistic attention they require. It has nothing to do with a mask or art. A piece of Charles Manson got these people recognized in a headline — not the mask or their artistic ability.”

Channels says that the masks are different from other murderabilia items on the market because they contain human remains. “People don’t get a pass to be egregious just because it was Charles Manson,” he explains. “Painting with the remains of dead people is a bit barbaric and disrespectful.”

In March 2018, a California court awarded Manson’s remains to his grandson, Jason Freeman, though he, Channels, and Manson’s son Michael Brunner had all made a claim. Channels was named as the sole beneficiary in a 2002 version of Manson’s will, but the attorney representing the Kern County Coroner questioned its validity because the last page came from what appeared to be a separate handwritten letter. The fate of Manson’s estate — which could contain anything from items of clothing to royalties to various songs — is yet to be decided in court, but has come down to Channels and Freeman.

“As the executor of Charles Manson’s will, I have watched as his remains have been mistreated by many unscrupulous individuals looking to make as much money as possible, ignoring the court, family and estate as well as the deceased wishes when it comes to how they wanted their body handled and treated,” Channels says. He adds that had he been awarded Manson’s remains in court in 2018, he would have buried him in Death Valley as he says Manson requested when he was alive.

But not everyone views the masks in a negative light. Eric Holler, who runs Serial Killer Ink, a website selling true crime collectibles, says that he doesn’t find the masks, their production, or the ingredients used to be at all troublesome. He also points out that using human blood and/or ashes in artwork isn’t unusual.

“In the 1970s, the rock band KISS poured vials of their own blood into the vats of ink used to print their comic books,” Holler tells Rolling Stone. “A more extreme use of blood as artistic expression could be seen at performances of deceased punk rock legend G.G. Allin in the 1980s. Allin was notorious for cutting deep gashes in himself and bleeding out while on stage. Like both KISS and Allin, Manson, has been wrongly accused of being a literal disciple of Satan. I am not a subscriber to that belief. I see art for what it is: art — even if it is considered somewhat taboo by the mainstream. I happen to find all three very fascinating in their own separate ways.”

In fact, Holler says that he doesn’t find the masks as questionable as other Manson-related items that have been sold, like his false teeth. “I would have no issue listing these masks for sale on my website,” he adds.

Fisher says he didn’t lose any sleep over the backlash against the masks. “I know that anytime you send something out there to the public, you’re open for ridicule and there is no shortage of people on the internet to ridicule your artwork.” And both Fisher and Almighty contend that more than anything, Manson is an interesting character. Almighty predicts that in the future, Manson will be viewed in the same light as occultist Aleister Crowley or mystic Grigori Rasputin, and sees the masks as a type of memento mori, along the same lines as Victorian hair art.

“I mean, look: the life of Charles Manson fascinating. And anybody that says anything contradictory to that isn’t telling the truth,” Fisher says. “There’s a reason [that we are still talking about him] all these years later. There’s been a lot of murders that have taken place in this country since 1969 and almost all of them are forgotten about.”