On Thursday, President Trump signed the 2018 Farm Bill, a massive piece of legislation renewed once every five years since 1933, outlining regulations on everything from food stamps to environmental land use. This one does something, though, that the previous versions have not — it legalized industrial hemp, including the plants used to produce CBD oil. Currently surging in popularity due to its therapeutic properties, CBD has existed in a confusing legal gray, governed by a mishmash of laws that vary from state to state. Despite this questionable legality, it’s turning up in cocktails and wellness products, it topped $350 million in consumer sales in 2017 — and it’s expected to grow once the bill goes into law.

While the previous Farm Bill, passed in 2014, eased some federal regulations on CBD production, this one goes much further. Most importantly, it removes hemp and any hemp derivative from the Controlled Substances Act, legally separating it from marijuana and putting its supervision under the Department of Agriculture. In the most basic sense, these plants serve three primary uses: fiber (paper and cloth), seeds (for hemp oil and food), and cannabinoid oils. It’s this last category that’s the most profitable and has the biggest potential for growth. The bill defines hemp as any part or derivative of cannabis with a THC level below 0.3 percent on a dry-weight basis.

It’s important to note, however, that the bill creates its own new regulations and gray areas. First, it bars anyone convicted of a drug felony from working in the hemp industry for 10 years after the date of their conviction. In earlier drafts, persons convicted of drug felonies had been banned entirely. The final draft softens this somewhat to the current 10-year-ban.

Each state will also have to submit a plan to the US Department of Agriculture (USDA) about how it will move forward with hemp cultivation. If the state government chooses not to make such a plan, producers can submit directly to the federal government. Whether this will be a serious obstacle or a relatively pro-forma rubber stamp remains to be seen.

Drug scheduling is another interesting wrinkle. The Drug Enforcement Agency (DEA) maintains a list of all drugs, organized into five categories, “depending upon the drug’s acceptable medical use and the drug’s abuse or dependency potential,” according to its website. Earlier this year, the DEA reclassified FDA-approved drugs that contain CBD and no more than 0.1 percent THC from Schedule I, the most serious category, to its lowest category, Schedule V, alongside prescription cough syrups and painkillers. But the farm bill completely removes from the drug schedule all hemp plants and derivatives with much higher THC levels, 0.3 percent.

This creates interesting questions not just around legality, but prescriptions. Under the DEA framework, CBD requires a doctor’s perscription, but under the Farm Bill it doesn’t. Will DEA rules still apply to “FDA-approved” CBD products, but with the USDA not requiring future products to submit for FDA approval? Will there be some class of prescription-only CBD products approved by the FDA, and a lower class of unapproved over-the-counter products? Or will the farm bill entirely override the DEA rules? To date, there is only one FDA-approved CBD product, Epidiolex, approved to treat a rare form of childhood-onset epilepsy.

In more than one place in the bill — for instance, Section 12515, “Prohibition on Slaughter of Dogs and Cats for Human Consumption” — there is boilerplate language saying the bill does not prevent a state or local government from making a “law or regulation that is more stringent than this section.” This is essentially saying if you want to regulate animal welfare more closely than we have here, go ahead. Basically this same language — any state can enact laws “more stringent than this subtitle” — appears in the hemp section, though its implications are vastly different. Idaho, Nebraska and South Dakota are the only states where all forms of marijuana are illegal, and South Dakota has laws specifically outlawing CBD. These few words in the bill appear to allow those laws to continue.

Despite these complications, hemp and cannabis advocates and celebrating the bill as a victory with far-reaching implications.

“It’s a game changer,” says Erin Holland, CMO of hemp genetics company Tree of Life Seeds, which breeds hemp seeds for farming. “We’re very excited about it. Right now, we face a lot of hurdles with banking and other things. I can’t put a paid ad on Facebook, or though Google because we’re considered a drug. This is going to open a lot of doors for us.”

“This is a watershed moment for CBD in the United States,” says Bethany Gomez, director of research, at the cannabis and CBD market research organization Brightfield Group. “With hemp and all of its derivatives officially removed from the controlled substances act, CBD moves from a legal gray area into the light … this shift will allow for CBD to make its way to the shelves of larger scale, mainstream distribution channels and pave the way for the large mainstream consumer packaged goods companies in industries like drinks, beauty, pet, skin care and tobacco to develop CBD products and capitalize on this emerging industry.”

The addition of this amendment to the bill is largely due to the work of Republican Senate Majority Leader Mitch McConnell, who is keen to stress that being pro-hemp is different from being pro-marijuana. 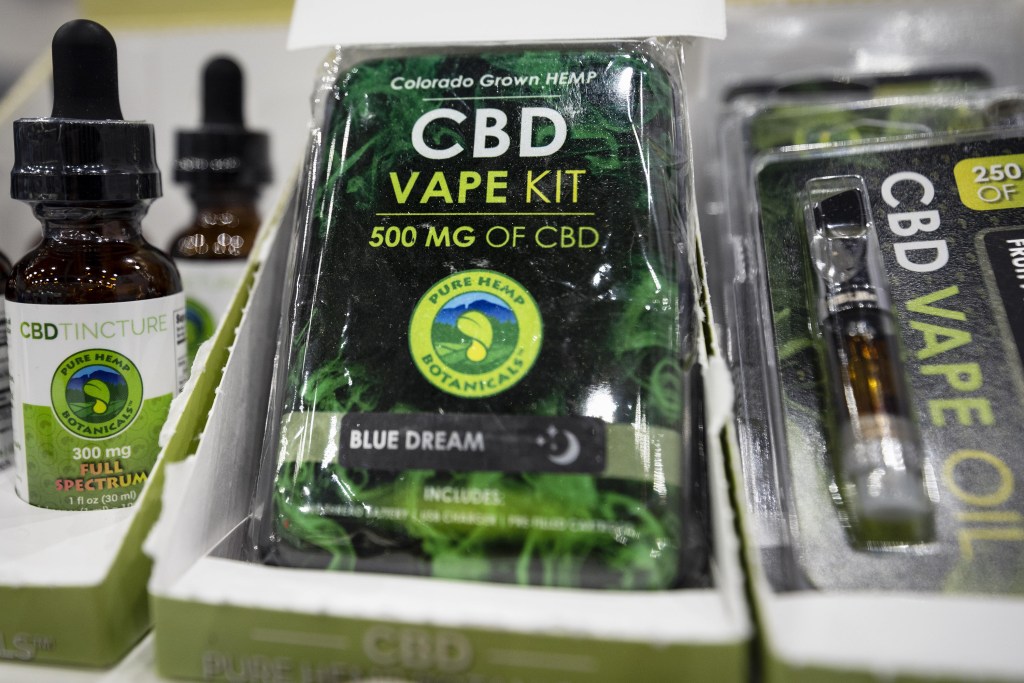 CBD is already one of the most rapidly growing segments of the cannabis industry. Photo credit: © Ronen Tivony/NurPhoto/ZUMA

“I do not have any plans to endorse the legalization of marijuana,” he said in a May press conference, adding that marijuana and hemp are “two entirely separate plants.” He later called marijuana hemp’s “illicit cousin” whom he chooses “not to embrace.”

McConnell has been pushing to legalize hemp since 2013, when he fought for the authorization of small pilot programs allowing the cultivation of industrial hemp. One of those pilot programs was located in his home state of Kentucky, where it’s proved hugely popular. According to the Kentucky Department of Agriculture, in 2017, 198 growers planted 3,271 acres, the highest number on record. That’s up from just 33 acres in 2014, the program’s first year.

Hemp’s illegality is a longstanding talking point for marijuana legalization advocates, supposedly showing the senselessness of U.S. drug policy. Despite being cultivated by humans for thousands of years for applications like clothing, rope and food, hemp production in the United States has been illegal for most of the Twentieth Century.

It began to be seriously regulated in the United States with the Marihuana Tax Act of 1937, the first large-scale effort to criminalize marijuana, which made no distinction between low-THC hemp and high-THC marijuana. This was formalized in 1970, when the Controlled Substances Act legally classified hemp as a Schedule I drug.

“With this Farm Bill, people who were scared to get involved are now waving around millions of dollars,” says Tree of Life Seeds’ CEO Jason Martin. “It really hasn’t changed anything about the infrastructure of the business, but people who on the fence are now eager to get in.”