Weed in Congress: Three Republicans Stand in the Way of Legalization - Rolling Stone
×

The Capitol Hill Club sits kiddy-corner from Cannon House Office building in downtown Washington, D.C. White table cloths and carved wooden elephants define the decor of this Hill hangout, which caters to mostly Republican lobbyists, staffers, and the occasional politician. But on a stifling day in June, a Democrat lobbyist came to lunch.

Saphira Galoob was there to talk about cannabis legalization with Republican lobbyist Don Murphy. Over sweet potato fries, Murphy — a former GOP state representative in Maryland who has been working in marijuana policy for over 15 years — and Galoob traded war stories about advocating for cannabis on Capitol Hill, where, as Murphy explains, public opinion only goes so far.

Back in 2017, she said, senators like Tom Cotton told her to her face that their states and voters didn’t care about cannabis. “There was a ripeness issue. There was no standing because it wasn’t yet ripe, for members of Congress. And I think that is where the tide has turned.”

Now, over 60 percent of Americans nationwide are in favor of full marijuana legalization. Eleven states and Washington, D.C. have legalized adult-use cannabis use, and 36 more have some form of legal medical or recreational cannabis use.

That public support has translated into more cannabis-related legislation introduced into this congress than ever before. The SAFE Banking Act makes banking easier, for example. The STATES Act solidifies the right of states to legalize cannabis and protects them from federal interference, while the Veterans Equal Access Act opens up more research opportunities into how cannabis can be used to help veterans, from treating PTSD to pain management.

And the issue is increasingly bipartisan — Republicans senators like Cory Gardner (CO) and Rand Paul (KY) are both regular sponsors of marijuana legislation, and the Congressional Cannabis Caucus is co-chaired by two Republicans and two Democrats.

But public and bipartisan support are not enough for full marijuana legalization, says Galoob. “We are still in a situation where the temperature within the Republican Party conference — within the leadership — is not yet signaling that it’s OK.”

The circle of people on Capitol Hill who will decide if cannabis legislation passes is actually pretty small. There are three names that are continually listed — by lobbyists, advocates, and lawmakers — as the gatekeepers to any federal cannabis legislation: Republican Senators Mike Crapo (ID), Lindsey Graham (SC), and Majority Leader Mitch McConnell (KY).

They make decisions about which cannabis bills — if any — the Senate in Congress will have opportunity to vote on this session.

“I used to think that in civics, in government, you need 50 percent plus one to pass legislation,” Murphy says. “Not exactly. You need one, plus 50 percent.” That one, says Murphy, is a committee chairman.

In order to get a bill to the floor for a full Senate vote, it must first pass the House, then get seen by a Senate committee. However, there are absolutely no guarantees that a committee will ever hear a bill. That’s completely up to the committee chairman.

Senators Crapo and Graham are chairmen of the Senate Banking and Senate Judiciary committees, respectively — the two committees that have the highest chance of seeing standalone cannabis legislation in this congress.

Take, for example, the SAFE Banking Act, which is expected to pass the House by a strong margin. But because the bill deals with banking, it will have to pass through the Senate Banking Committee, which has been led by Crapo since 2016.

Crapo’s home state of Idaho is one of only three in the nation with no legal marijuana; not even CBD for limited medical use. The state has the second-largest Mormon population in the nation, and the Mormon Church — of which Crapo is a member — has taken a stance on marijuana that is cautiously pro-medical but strongly anti-recreational. A 2018 poll showed that 79% of Idahoans support medical marijuana, but a majority are still against legalization for recreational use. In an attempt to sway Crapo to consider the legislation, the Marijuana Policy Project says they are currently gathering signatures to put a marijuana legalization bill on the 2020 ballot there, in hopes of showing Crapo how his constituents feel. 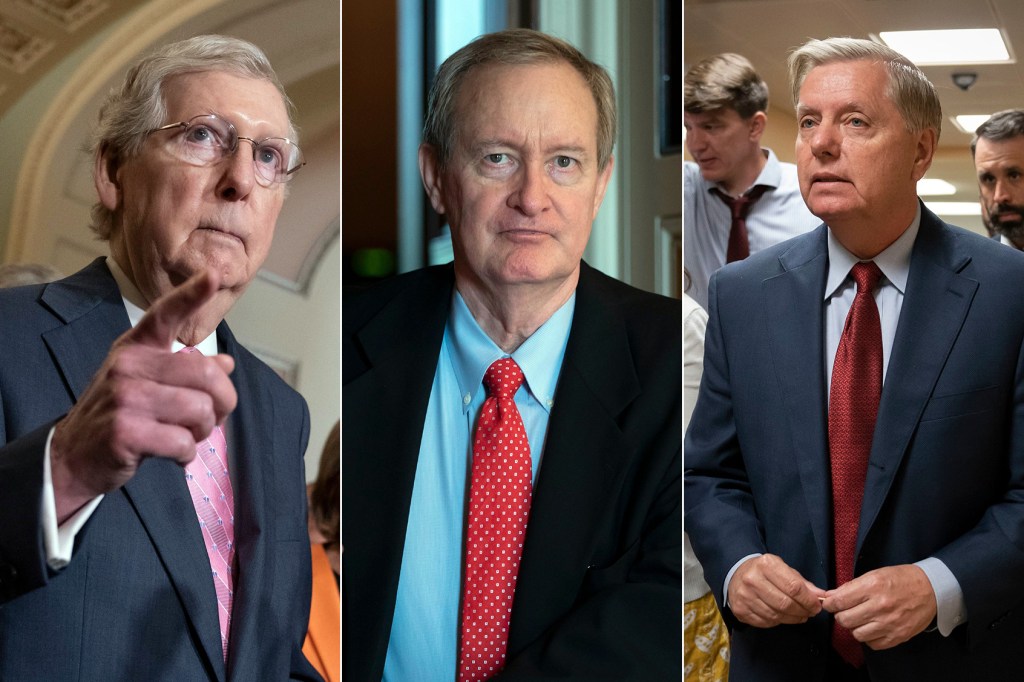 “I’d say the key players right now are the citizens of Idaho — Crapo’s constituents,” says Sen. Kevin Cramer (R-ND), a co-sponsor of the SAFE Banking Act. “Ultimately it’s up to the chairman and committee leadership to get it to the floor if that’s what they want.”

Until very recently, the chairman and his office avoided taking a hard stance on the SAFE Banking Act by arguing that cannabis’ Schedule I status on the Controlled Substances Act should be dealt with first. But on July 16th, a hearing popped up on the Banking Committee calendar titled “Challenges for Cannabis and Banking: Outside Perspectives,” to be held in late July. Sen. Crapo’s Senate Banking committee, turns out, has scheduled a hearing on the SAFE Banking Act, officially pulling it into the Senate sphere of influence before it has even formally passed through the House of Representatives.

While that is good news for pro-SAFE Banking advocates and a big step forward for the bill itself, the story is far from over. The bill still needs a vote — called a “markup” — scheduled, it needs to pass that committee vote, and then it moves on, most likely, to the Senate Judiciary Committee.

The situation in the Judiciary Committee, where Sen. Lindsey Graham is chairman, is similar to banking. Most cannabis bills — not just the banking bill — would have to pass his committee before being considered in the full Senate, because they involve the Controlled Substances Act, which is overseen by the Department of Justice.

Sen. Graham’s track record on marijuana is mostly cold. He co-sponsored the medical marijuana-focused CARERS Act of 2015, which would have re-scheduled marijuana and given added protections to states that legalized marijuana. But since then, Graham has voted against other bills such as the SAFE Banking Amendment — which have been tacked onto different appropriations bills multiple times over the years. Graham told Roll Call in April that he is “not very excited about” the SAFE Banking Act, and in 2016 told POLITICO Magazine he rejects recreational marijuana. His scorecard on marijuana advocacy group NORML’s website gives him a “C” grade.

What he would do if cannabis legislation is sent to his committee is unclear. Most advocates don’t think Graham is motivated to hear standalone marijuana legislation unless there was additional pressure on him from GOP leadership. His state — South Carolina — allows small amounts of CBD to be taken for specific medical ailments, but has no large medical or recreational cannabis market. Without voters whose cannabis businesses are impacted by current federal banking regulations, Graham has little incentive to look at the SAFE amendment. (Graham’s office did not respond to multiple requests for comment for this story.)

Even if a cannabis bill passes a Senate committee in this congress, though, that doesn’t necessarily mean it will make it to a vote. Majority Leader Mitch McConnell holds the keys to the Senate chamber, and he only brings bills to the floor that he personally wants passed. Though he worked hard last year to legalize hemp –– Kentucky has a long history of farming industrial hemp, and McConnell was looking for a way to help the state’s economy — he’s said he will not consider descheduling cannabis. (McConnell’s office did not respond to multiple requests for comment for this story.)

Some advocates believe that the majority leader could be swayed if a cannabis bill could also help the hemp industry. Right now, some hemp farmers are still having issues opening bank accounts or accessing other programs that should be legal for them, because to the untrained eye, full-spectrum cannabis and hemp look incredibly similar. The difference between legality and classification as a Schedule I drug is in how much CBD and THC the plant possesses, and banks don’t want to be held liable if a hemp company grows a crop with too much CBD or any THC. So many banks and credit card companies are avoid working with the hemp industry entirely. At a tour of a Kentucky hemp facility earlier this month, McConnel himself acknowledged the service gap, saying the banks “need to be convinced, and we hope to explain it to them.”

If the SAFE Banking Act was passed, it would arguably give hemp – which Sen. McConnell worked hard to make legal for his state – some breathing room. Republican Cory Gardner, one of the more influential GOP members on this topic, is optimistic. “I think we’re making more progress than we’ve ever had,” he says.

When asked about the chances for cannabis legislation in the Senate, Senator Jeff Merkley of Oregon said he believes the SAFE Banking Act — and potentially other cannabis legislation — has the votes to pass. “It would help a lot to have the support of leadership in this chamber,” he says. “If there’s no obstruction, if we have a free chance to have a debate on the floor, I think we can get the sixty votes and pass it.”

If no cannabis legislation is passed by the time a new congress arrives in January of 2021, the whole process — introducing bills, committee hearings and votes, House votes, Senate votes, etc — will have to start over at square one.

The 117th Congress, though, will have even more pro-cannabis lawmakers than the 116th, as more states legalize recreational and medical cannabis. Illinois will begin selling cannabis recreationally in January 2020, for example, adding 18 Congressmembers and two senators who represent a legal cannabis state. New Jersey, New York, Florida, Ohio, and Arizona are all states that also may legalize adult-use marijuana in 2019 or 2020, and other states are in line to consider medical programs.

“As a practical matter,” says Rep. Earl Blumenauer. “What you’re seeing on the floor of the house is a manifestation of broad a growing support for simple, common sense cannabis reform.”