Rating: Four out of fFve stars

Libby Epstein, the narrator of Taffy Brodesser-Akner’s enthralling debut novel, Fleishman Is In Trouble, is a magazine writer turned suburban mom obsessed with the work of Archer Sylvan, a legendary Tom Wolfe-esque journalist who picked one side of a story and argued passionately for it, ignoring all contrary evidence. Late in the book, about the turbulent post-marital separation life of Libby’s old college friend, physician Toby Fleishman, Libby vows, “I would never be Archer Sylvan, but I would write my book, and it would have something in it that Archer was incapable of, which is all sides of the story, even the ones that hurt to look at directly—even the ones that made us too angry to want to hear them.”

Billie Eilish on Her Debut Book: 'It's a Crazy, Amazing Little Scrapbook of My Life'

The Best Tools to Help You Finally Write That Book, According to an Expert

Libby is an authorial stand-in for Brodesser-Akner, a New York Times magazine staffer who has made an art of the celebrity profile that leaves you wondering how she can be celebrating and condemning her subjects at the same time. (Her Gwyneth Paltrow interview crafted an image of the actress’s elegant feet into a metaphor for the uselessness of Paltrow’s Goop line of products to most of her customers.) And with this book, Brodesser-Akner has done exactly what her fictional counterpart promises to do. She writes with the heft and masterful wordplay of a Wolfe, but with empathy for and curiosity about all the players in the tale. It’s a cutting sociological dissection of the way we live now, but it cares about its characters as people in a way that’s absent from the prose of Wolfe — or, for that matter, Jonathan Franzen, whose work Brodesser-Akner evokes while confidently one-upping. 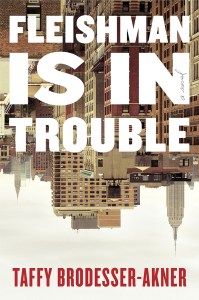 So on the one hand, Brodesser-Akner can go on for page after uproarious page describing the many women Fleishman has met via his phone’s new dating apps: “There was Sara from Oregon,” she writes, “who wanted to be a painter and had a death grip when she gave hand jobs. There was Bette, who had once been in a porno, or maybe just a homemade video that an ex-boyfriend then distributed, and who said, ‘That’s what she said’ four times over the course of two Cape Cods.” And on the other, she paints everyone we meet in three dimensions: Fleishman, his kids, his elusive and allegedly monstrous wife Rachel and more. Even the women on the apps turn out to be much more (and sometimes less) than the generous sexual fantasies Toby would prefer they remain, while the book slowly but surely begins to question whether we should, like Archer Sylvan would have, be taking the title character’s side.

Libby herself is a relatively minor figure for much of the narrative, in the same way that Brodesser-Akner lets herself be present, but only so much, in her journalism. But both women write with a clear and addictive voice. Fleishman Is In Trouble will occasionally make you angry at the things the people in it do, but mostly it will make you hungry for whatever Brodesser-Akner is going to write next.